A total of 2,692 people have been detained in anti-war protests in Russia since Thursday, independent protest monitoring site OVD-Info said Saturday.

At least 1,370 of them were detained in protests in Moscow, according to the same site.

Protests are ongoing in at least 27 cities, according to OVD-Info.

On Thursday, Russia's Investigative Committee warned that participation in any anti-war protest was illegal. It also said that offenses could be entered on participants’ criminal records which would “leave a mark on the person’s future.”

A large column of Russian armored vehicles drove past CNN correspondent Frederik Pleitgen on Saturday headed toward Ukrainian territory and the city of Kharkiv.

"This is something ... that we've seen throughout the entire course of the day, that more of this heavy equipment has been moving towards the front line," he reported from near Belgorod, Russia.

"To see the Russians move that many of those in one column towards the front line is certainly something that at least for us right now is remarkable," he said.

He also said that he and his team have been hearing more rocket launchers going off today than in the past few days.

Earlier today, a senior US defense official said Russian forces are facing the “stiffest resistance” to their invasion in the northern part of Ukraine along two axes: “down towards Kyiv and generally from Belgorod towards Khakriv."

Heavy shelling reverberated around the outskirts of the strategic maritime town of Mykolaiv in southern Ukraine on Saturday night.

One substantial blast lit up the skyline at around 6 p.m. local time. The impacts of multiple rockets were heard on several occasions and small arms fire grew.

The shelling comes after a day of heightened tensions in the city where a CNN crew saw Ukrainian troops fire warning shots and throw suspected Russian saboteurs from their cars to the ground.

The town, which sits on an inlet from the Black Sea, raised its bridge Saturday, a rare event locals said had not happened for years. The move was apparently designed to cut a main connection between the north and south of the city after unconfirmed reports Russian paratroopers landed in the city’s northern areas.

The city’s main fuel plant was also hit by an apparent missile late Friday, causing significant damage, even though the tanks were empty, an official at the plant told CNN.

The Russian Ministry of Defence says its troops have been ordered to resume their offensive “in all directions,” after a suspension was ordered for negotiations with the Ukrainian government.

“[On Friday], after the Kyiv regime declared its readiness for negotiations, active hostilities in the main directions of the operation were suspended,” Ministry of Defence spokesperson Maj. Gen. Igor Konashenkov said in a statement on Saturday. “After the Ukrainian side abandoned the negotiation process, today all units were ordered to continue their offensive in all directions in accordance with the operation plan.”

A Ukrainian presidential adviser denied in the early hours Saturday that Ukraine had refused to negotiate.

Konashenkov’s remarks, also echoed by the Kremlin, were made after Western officials said the Russian invasion was not progressing as fast as Moscow would have expected.

"This is a clear violation of International Humanitarian Law. Shelling of civilian infrastructure needs to stop now," Lenarčič said on his verified Twitter account.

A residential block near Kyiv's second airport was struck by a missile or rocket fire early Saturday.

Images and video from the scene showed a large impact some ten floors up.

Some background: On Friday, Russia's foreign minister Sergey Lavrov sought to reassure the world about civilian casualties on day two of Russia's invasion of Ukraine.

"Nobody is going to attack the people of Ukraine," he said during a heated press conference, telling CNN that there were "no strikes on civilian infrastructure."

But evidence suggests civilian infrastructure is under attack: Reports about apartment buildings and kindergartens being shelled, civilians being killed, and rockets being found in residential streets have been trickling in since the beginning of the offensive.

Social media videos, photos and satellite images analyzed and geolocated by CNN confirm that on several occasions densely populated areas have been hit by Russian forces.

Some Russian government websites, including the Kremlin and Ministry of Defence, have been down for a third day in a row.

The hacking group Anonymous has claimed responsibility for the attacks.

On Friday, the same Russian websites appeared offline for a while, but the Kremlin denied it was being attacked by Anonymous, according to state media.

The heaviest fighting in Ukraine is “in and around Kharkiv,” a senior US defense official said Saturday.

The official said the US saw “stiff resistance on the northern advance towards Kyiv,” as well. “But the heaviest fighting we still assess is in and around Kharkiv,” the official added.

Russian forces are facing the resistance to their invasion in the northern part of Ukraine along two axes, the official said: “down towards Kyiv and generally from Belgorod towards Khakriv.”

Russian forces are facing “less resistance in the south,” the official added. 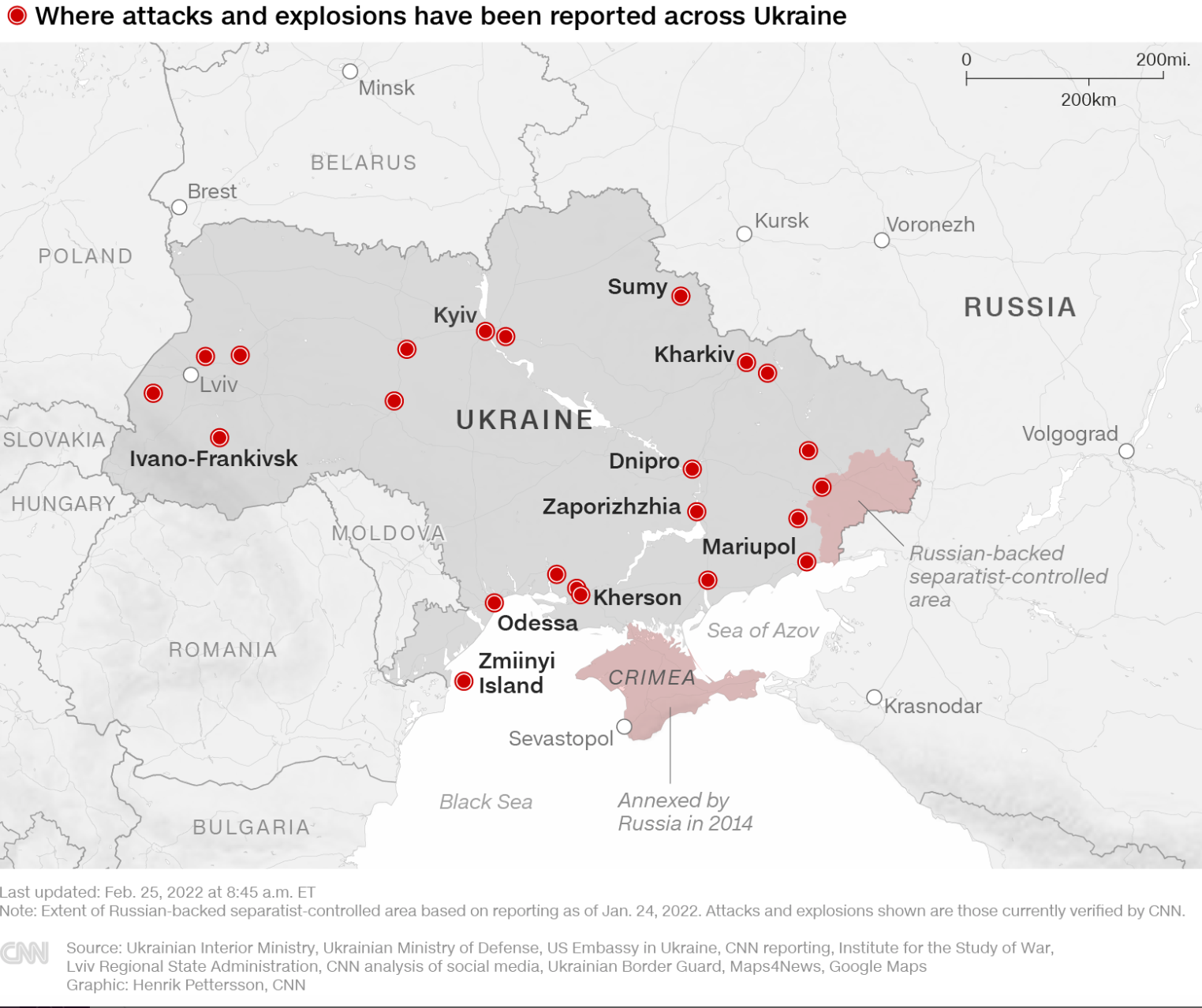 US security assistance to Ukraine has arrived “within the last couple of days,” a senior defense official said Saturday, indicating that US President Joe Biden's administration has continued to send in aid even after Russia launched its invasion.

“We have continued to flow assistance to the Ukrainians, even since the airspace has become disputed and contested, and we’re going to continue to look for additional venues to do that,” the official said on a call with reporters.

Late Friday night, the US approved another $350 million in security assistance to Ukraine. In a statement Saturday morning, the State Department announced that it would include “lethal defensive assistance” that would help Ukraine deal with armored, airborne and other threats.

Though the senior defense official would not detail the exact types of equipment beyond Javelin anti-armor missiles, the US has provided Stinger anti-aircraft missiles to Ukraine in the last few weeks.

The official would not say how the assistance would arrive in Ukraine.

Since Ukraine’s airspace is contested, the US has not flown any aircraft into or over Ukraine. But countries like Poland have openly stated that they have sent ammunition into Ukraine with ground convoys, one of the only viable options given the current situation.

“I think you'd have to assume that ground routes would certainly be on the list of options that we would consider,” the defense official said without providing further details.

The speed of the Russian advance on Ukraine has temporarily slowed "likely due to acute logistical difficulties and strong Ukrainian resistance,” according to the British Ministry of Defence.

In its latest intelligence update on Ukraine, the ministry says the capture of Ukraine's capital of Kyiv "remains Russia's primary military objective."

"Russian forces are bypassing major Ukranian population centres while leaving forces to encircle and isolate them," the update added.

"Overnight clashes in Kyiv are likely to have involved limited numbers of pre-positioned Russian sabotage groups," the ministry said.