YouTube has blocked Russian state media outlet RT from Ukraine and suspended its ability to monetize its content on the platform globally, the video giant said Saturday.

The move to restrict RT and several other Russian channels comes after the Ukrainian government asked YouTube to cut off access from within the country, YouTube told CNN.

In a statement, YouTube spokesperson Ivy Choi cited “extraordinary circumstances in Ukraine” for the company’s steps.

"In light of extraordinary circumstances in Ukraine, we’re taking a number of actions,” Choi said. "We’re pausing a number of channels’ ability to monetize on YouTube, including several Russian channels affiliated with recent sanctions. We will be significantly limiting recommendations to these channels. And in response to a government request, we’ve restricted access to RT and a number of other channels in Ukraine. We will continue to monitor new developments and may take further actions.”

YouTube also said that in recent days, it has removed hundreds of channels and thousands of videos that violated its policies, among them a number of channels that the company said were engaging in coordinated deception.

YouTube’s decision follows widespread criticism as journalists, activists and even a member of Congress noticed that the platform was running ads against content from RT.

A letter to YouTube’s parent Alphabet on Friday by Virginia Democratic Sen. Mark Warner said his staff was able to find instances of RT’s monetization on YouTube, and that he had alerted the Departments of Justice and Treasury to a report about YouTube allowing sanctioned entities to monetize on YouTube as well.

In video statement posted on Telegram, Shmyhal said that only citizens of Ukraine will be able to cross from Russia and Belarus into Ukraine.

He did not indicate when the border closure would come into force.

US Secretary of State Antony Blinken marked the eighth anniversary of Russia’s invasion and annexation of Crimea as “a prior example of disregard for international law and Ukraine’s sovereignty and territorial integrity,” in a tweet Saturday, as Russia's invasion of Ukraine continues.

“The U.S. and Ukraine today mark the 8th anniversary of Russia’s 2014 invasion and seizure of Crimea, a prior example of disregard for international law and Ukraine’s sovereignty and territorial integrity. We reaffirm that Crimea is Ukraine and stand #UnitedWithUkraine,” Blinken tweeted.

Read more about the conflict here. 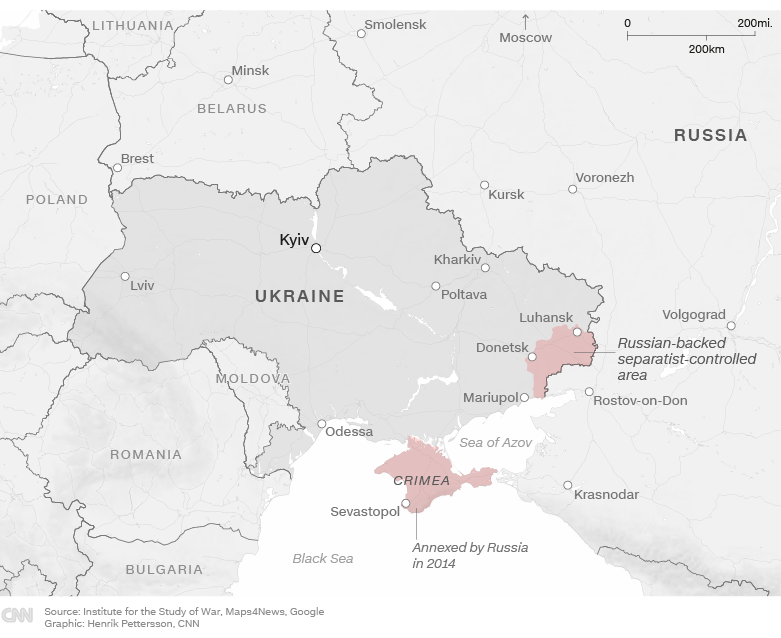 A NATO military official claims that Russia is spinning its slow advance in the invasion of Ukraine as having stopped to allow time for negotiations.

“They are having problems,” the official explained, pointing to the alliance’s latest intelligence. “They lack diesel, they are proceeding way to slow and morale is obviously an issue.”

A Ukrainian presidential adviser denied in the early hours Saturday that Ukraine had refused to negotiate.

Asked whether Russians are likely to intensify their efforts, the official said, “They have to, they are way behind schedule. This is getting out of hand for them, every additional day is very painful.”

Chelsea club owner Roman Abramovich announced on Saturday he will be giving the “stewardship” of the club over to trustees of Chelsea’s charitable foundation.

“During my nearly 20-year ownership of Chelsea FC, I have always viewed my role as a custodian of the Club, whose job it is ensuring that we are as successful as we can be today, as well as build for the future, while also playing a positive role in our communities. I have always taken decisions with the Club’s best interest at heart. I remain committed to these values. That is why I am today giving trustees of Chelsea’s charitable Foundation the stewardship and care of Chelsea FC,” Abramovich wrote in a statement.

“I believe that currently they are in the best position to look after the interests of the Club, players, staff, and fans,” he said.

Abramovich, who was born in Russia, made the announcement after calls he should be barred from owning the English Premier League side due to his ties with Russian President Vladimir Putin’s regime.

In a copy of the letter obtained by CNN, Abramovich is named on the "priority shortlist," for what FBK describes as being a key enabler and an alleged beneficiary of "Kremlin kleptocracy."

A spokesperson for Abramovich said in an email statement to CNN that "there is no basis for such claims which are entirely without foundation."

Navalny was detained on Jan. 17, 2021, moments after arriving in Moscow following months of treatment in Germany after being poisoned in August 2020 with nerve agent Novichok.

US critical infrastructure firms should reinforce their defenses and increase their vigilance following data-destroying cyberattacks in Ukraine prior to Russia’s attack on Ukraine, the FBI and US Cybersecurity and Infrastructure Security Agency said Saturday.

“Destructive malware can present a direct threat to an organization’s daily operations, impacting the availability of critical assets and data,” the US agencies said in a public advisory. “Further disruptive cyberattacks against organizations in Ukraine are likely to occur and may unintentionally spill over to organizations in other countries.”

The advisory includes several technical recommendations for organizations to keep malicious software from spreading on their systems.

US officials continue to say there are “no specific, credible” threats to the US homeland tied the conflict between Russia and Ukraine, but Saturday’s advisory is the latest warning from officials that what happens in cyberspace in Ukraine may not stay there.

Just hours before Russian forces began to attack Ukraine early Thursday, cybersecurity researchers said they had found a data-wiping hacking tool on hundreds of computers at Ukrainian government and financial organizations. The malicious code is designed to delete data from computers and render them inoperable — which has the potential to hobble organizations trying to stay online during a war.

Jean-Ian Boutin, head of threat research at anti-virus firm ESET, which responded to some of the destructive hacks, told CNN that he assumed that the malware was successfully deployed and the "affected machines were wiped."

Two Ukrainian government contractors — one with a presence in Latvia and another with a presence in Lithuania, both NATO members — were hit with the malware, according to Broadcom’s cybersecurity unit Symantec. While the hack was targeted at Ukrainian assets, the potential for collateral damage in cyberspace during the war in Ukraine has been high on Western officials’ minds.

It’s unclear who was responsible for deploying the destructive malware. It was the second such destructive hack in as many months. A similar piece of malicious code appeared on the systems of some Ukrainian government agencies and nonprofit and technology organizations in January.

The White House has blamed Russia’s GRU military intelligence agency for a separate cyberattack on Ukrainian government websites on Feb. 15 that temporarily knocked the websites offline. Russia has denied the allegation.

In a statement Saturday, CISA Director Jen Easterly said her agency has been working “with our partners to identify and rapidly share information about malware that could threaten the operations of critical infrastructure here in the U.S.”

Three NATO members have announced they would send reinforcements to assist Ukraine in its battle against Russia.

The Czech Republic committed on Saturday to send a “shipment of weapons to Ukraine” worth over $8.5 million to a “place of Ukrainians choice."

“The government has approved a shipment of weapons to Ukraine. We are sending machine guns, submachine guns, sniper rifles and pistols and their corresponding ammunition valued at CZK 188 million,” Czech Prime Minister Petr Fiala tweeted.

“We are doing everything we can to help Ukraine,” Fiala added.

The Netherlands on Saturday also said it would be providing Ukraine with more firepower.

Speaking at a televised news conference, the Portuguese prime minister went on to say, “there was an unanimity of all states, in view of the need to strengthen the NATO presence on the borders of Ukraine and in all the alliance countries that are close to the Ukraine region."

“Portugal, in this sense, in addition to the forces that this year has assigned to the European command of NATO, decided to anticipate, from the second half to the first half, the mobilization and commitment of an infantry company that will act in Romania and that will be projected in the coming weeks," Costa said.

"Several other countries at the moment are either anticipating or reinforcing or deciding to reinforce their participation with these countries [bordering Ukraine] in order to have a clear manifestation of unity and deterrence regarding Russia's actions," Costa added.

When asked for a specific number of that would be sent to support Ukraine, Costa said the infantry company would include 175 troopers.

Germany will deliver weapons to Ukraine in a major policy shift after resisting Kyiv's previous calls for defensive weaponry.

In its coalition agreement, the German government had agreed on a restrictive arms export policy that does not allow any weapons deliveries to crisis regions. The delivery of such weapons also has historical connotations post-World War II.

"The Russian attack marks a change in times. It is our duty to support Ukraine as much as we can defending themselves against Putin's invasion army. Therefore we will deliver 1,000 antitank weapons and 500 stinger missiles to our friends in Ukraine," German Chancellor Olaf Scholz tweeted Saturday after a meeting with Polish Prime Minister Mateusz Morawiecki and Lithuania's President Gitanas Nauseda.

Ukraine’s President Volodymyr Zelensky has hinted that there is consensus on SWIFT restrictions for Russia.

In a statement on Saturday evening, the Ukrainian leader said “we feel Ukraine has got the support of the whole civilized world. The practical result? SWIFT.”

He hailed this as an “important victory” and “means billions and billions of losses for Russia. It is a price for a sneaky invasion into our country.”

Earlier on Saturday, the Ukraine's Foreign Minister Dmytro Kuleba said the “technical preparations” for Russia’s ban from the SWIFT system have begun.

“Official decision hasn’t been processed yet, but technical preparations for making and implementing that decision have begun,” Kuleba said in a statement posted on his official Facebook page.

Banning Russia from the SWIFT high-security network that connects thousands of financial institutions around the world would cut Russia’s banks off the global financial system. The move is considered the “nuclear option” of sanctions, because while it would be very damaging to the Russian economy, it would hurt other countries, too.

A number of European countries said on Friday and Saturday that they would support cutting Russia off from SWIFT. The UK, France, Italy, Hungary, Cyprus, Lithuania, Estonia, Latvia and Germany already indicated they would not block the sanction.

US President Joe Biden is seriously weighing whether to remove Russia from SWIFT, the high security network that connect thousands of financial institutions around the world, but has yet to make a final decision, multiple people familiar with his thinking say.