New satellite images from Maxar Technologies show the Russian military convoy that has reached the outskirts of Kyiv is even longer than it previously measured.

To put a point on how far away Pribyrsk is from the Ukrainian capital, the small town is closer to the Ukraine-Belarus border and the failed nuclear reactor at Chernobyl than to Kyiv.

The company noted it saw plumes of smoke rising from a number of homes and buildings north and northwest of Ivankiv, near the roads where the convoy is traveling. At this time, it's unclear what has caused the plumes of smoke.

According to Maxar, in some areas the roadways are so choked with military vehicles it's actually causing traffic jams.

On Sunday, Maxar had measured the convoy — then near Ivankiv, Ukraine — at roughly 3.5 miles long.

Rudik, who is located in Kyiv, said that the strikes were "anticipated" because Russian President Vladimir Putin's words cannot be trusted.

"Tonight, there was 'peaceful negotiations,' that obviously resulted in heavier air strikes after — right after the negotiation ended up. And right now, the air strikes intensified and there are more of alarms for the whole night. We anticipated this because — let me give you some tips and tricks on talking to Putin. When he says, 'I want peace,' this means, 'I'm getting my troops to kill you.' If he says, 'It's not my troops,' it means, 'It's my troops and I am gathering them.' And if he says... 'I'm retreating,' this means 'I'm regrouping and getting more troops to kill you,'" she said.

"So it's not news for us when he went on a 'peaceful negotiation' ... that it will end up bringing more troops, destroying more buildings and trying to kill more Ukrainians," Rudik explained.

She added, "So, I spent my day today really gathering everything that I can so the resistance team that I formed can survive the siege if there will be one. And we anticipate that there will be a siege in Kyiv."

Rudik also said that Putin will be "raising the stakes" in the coming days.

"Our first fear is on the air force attacks that will be intensifying. And we have seen that today, already. So tomorrow and the day after tomorrow, there will be more of them to create terror and to create fear. Which we expect. That's why we are not afraid. Second, is he bringing more forces and he will actually try to close in and out to Kyiv. This is something that we are fighting from our side to make sure that he cannot close the entrances and exits to the city. This is where the resistance comes in. And of course, we will be trying to get into the negotiations," Rudik said.

Photographer Timothy Fadek has been in Ukraine since January, documenting the country’s crisis both before and after the Russian invasion.

He spent his Monday in the capital of Kyiv, which had been under a citywide curfew since Saturday.

Fadek watched as many citizens boarded trains to flee to the western part of the country while Russian forces moved closer to the city.

Others stayed behind, ready to join the resistance. Volunteers continue to sign up for the Territorial Defense Forces, Ukraine’s military reserve.

One of Fadek’s photos shows Iryna, a 55-year-old woman who was a bank teller before the war. She’s now stationed at the group’s headquarters.

In another photo, women add plastic foam particles to Molotov cocktails so that the bombs will stick to their targets better. 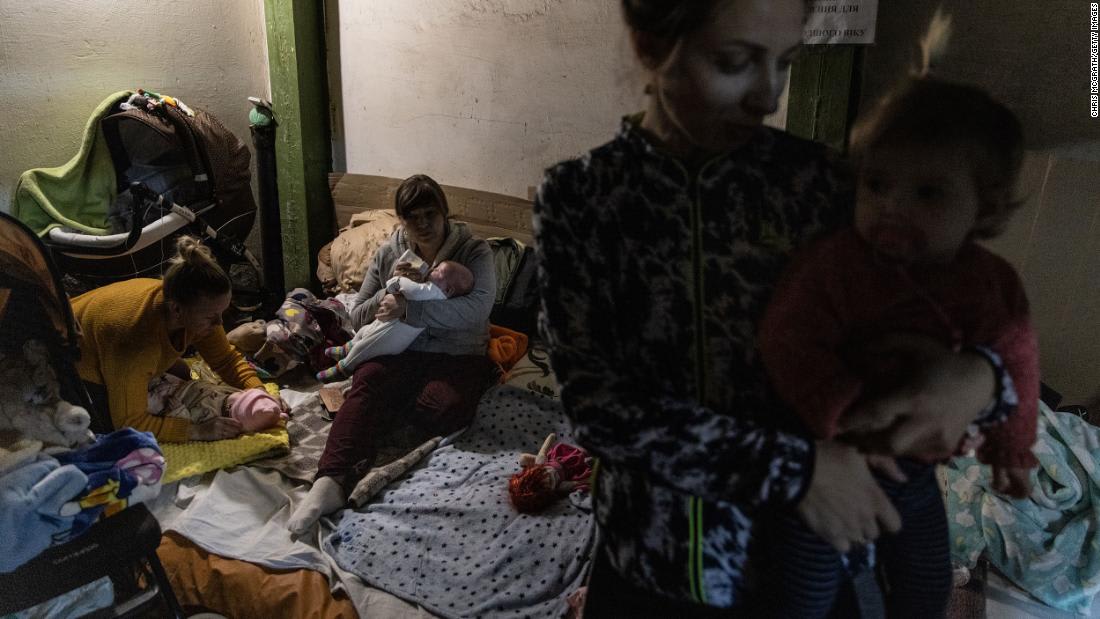 Ukrainian tennis star Elina Svitolina has announced that she will not play Tuesday in her match in Monterrey, Mexico, and is also refusing to play any Russian or Belarusian players.

Svitolina's announcement came Monday via her social media channels, where she also called on tennis organizations to follow the recommendations of the International Olympic Committee (IOC) to accept Russian or Belarusian nationals only as neutral athletes.

“I believe the current situation requires a clear position from our organizations: ATP, WTA and ITF,” Svitolina — referencing the Association of Tennis Professionals, the Women’s Tennis Association, and the International Tennis Federation — posted on social media Monday.

“As such, we – Ukrainian players – requested to ATP, WTA and ITF to follow recommendations of the IOC to accept Russian or Belarussian nationals only as neutral athletes, without displaying any national symbols, colours, flags or anthems."

Svitolina, who once reached a career-high of No. 3 in the world in women’s singles, is currently ranked 15th. She is scheduled to face Russian Anastasia Potapova on Tuesday, in the opening round of a tournament in which she is the No. 1 seed.

“Accordingly, I want to announce that I will not play tomorrow in Monterrey, nor any other match against Russian or Belarussian tennis players until our organizations take this necessary decision," Svitolina added.

“I do not blame any of the Russian athletes," she said. "They are not responsible for the invasion of our motherland. Moreover, I wish to pay tribute to all the players, especially Russians and Belarussians, who bravely stated their position against the war. Their support is essential."

TikTok has blocked Russian-backed outlets, such as RT and Sputnik, in the European Union, a spokesperson for the social media company tells CNN.

White House Deputy National Security Advisor for International Economics Daleep Singh highlighted a series of sanctions the administration was imposing on Russia Monday, telling MSNBC in an interview the administration expects moves to expel Russian banks from SWIFT and freeze the assets of the Russian Central Bank are “going to change the strategic calculus.”

“Russia is looking at a complete isolation from the global economy, from the global financial system, and from global technology. It's looking at a fortification of NATO’s eastern flank. It's looking at Europe diversifying away from Russian energy, and it’s looking at a West that is more energized and unified and determined than any point in the post-Cold War era. At some point the strategic failure, we think, will dawn upon Putin and the de-escalation may have a chance. But until then, we’ll continue to impose costs, Singh said.

Still, Singh said, the goal “is not to impoverish the Russian people,” instead slamming Putin for making “an act of war.”

“Our efforts are strategic choice, and we can change our strategic calculus at any moment, either through economic sanctions being removed or by engaging in in diplomacy and a peaceful resolution of this crisis,” he told MSNBC. “But that's a key difference. He's using brute physical force. We're making a set of strategic decisions that make this a failure for Putin," he said.

He also acknowledged Americans might see costs from sanctions, but encouraged viewers to “think of the alternative.”

Singh added, "What would be the cost of unchecked aggression in the heart of Europe? Think of the uncertainties that would cause, the chilling effect it would cause, the questions that will be asked about which country is next, which bully is next to exert a sphere of influence?"

Inside a briefing with members of the US House of Representatives, Rep. Ruben Gallego said briefers walked members through the potential timeline that some cities in Ukraine could fall. He declined to lay out specifics given the classified nature of the briefing but reiterated the number of Russian troops makes it a distinct possibility.

He also said there was a long line of questions members had including about how the resupply was going.

A member who declined to speak on the record because it was a classified briefing told CNN the estimates officials gave for when some cities could fall was "alarming."

Rep. Dan Crenshaw also confirmed that the timeline for cities to fall was given, but said they were just “estimates” and that the Ukrainians are fighting “way harder” than anyone has estimated, making it hard to know for sure.

Alexandra Ustinova, the member of Ukrainian parliament Rada, became emotional as she called for direct financial action against Russian oligarchs, more humanitarian aid, and a no-fly zone, following her meeting with US House members.

She also spoke about her own situation, as she is pregnant, acknowledging that she will probably give birth in America.

“We were talking about specific needs for our country,” in the meeting with the House Ukrainian Caucus, she said. “These can be divided into financial needs — which means we need sanctions, and we need personal sanctions against Putin and his close allies and their families.”

On the Russian oligarchs, particularly those in the US and other nations abroad, she said, “we need to seize their accounts, we need to take the money from them. If this is not being done, in a very short period of time, they’re not going to react.”

“Second, we need humanitarian support,” she continued. “People are literally sitting in Kyiv, in Kharkiv, in other cities without food, electricity, in cold weather without any heat.”

Tearing up, Ustinova said, “This is impossible, this is the 21st century in the middle of Europe where women have to deliver babies in bomb shelters, and they have nothing to eat after that.”

Ustinova said that the financial sanctions against Russia “have to be more specific, and they have to be stronger.

“If we are talking about cutting Russia off SWIFT, it has to be about all Russia banks. So far, from what we know, it’s going to be only partial, it’s going to be 5 or 8 banks. That means we leave a huge loophole for them, and they will be using it,” she said.

As she wrapped up her on-camera comments, Ustinova talked about how popular support for Ukraine has forced the international community to get involved.

Ustinova said, “people make their politicians not think of politics and polls, but think of people’s lives, and this makes a huge difference, because basically right now people on the streets are protecting citizens of Ukraine from being shot down to death, making their government’s take action. And I’m really grateful for that.”

Asked if she will return to Ukraine soon, she said she plans to continue meetings in DC.

“We need the support with our sky. We need to protect our babies in Ukraine who are being born in the bomb shelters—I’m sorry,” she broke off, turning away, in an emotional moment.

The National Hockey League (NHL) announced Monday that it is suspending its business relations in Russia, effective immediately.

In a statement, the NHL said:

“The National Hockey League condemns Russia’s invasion of Ukraine and urges a peaceful resolution as quickly as possible. Effective immediately, we are suspending our relationships with our business partners in Russia and we are pausing our Russian language social and digital media sites. In addition, we are discontinuing any consideration of Russia as a location for any future competitions involving the NHL."

“We also remain concerned about the well-being of the players from Russia, who play in the NHL on behalf of their NHL Clubs, and not on behalf of Russia. We understand they and their families are being placed in an extremely difficult position," the league added.

There are dozens of active Russian players in the NHL, including superstars Alexander Ovechkin and Evgeni Malkin.