The Ukrainian Air Force posted a video on Facebook on Sunday morning, claiming to show a successful drone strike by the military.

According to the Ukrainian Air Force, the purported attack took place in Chornobayivka, which is just north of Kherson. It's unclear when the strike took place.

In the video taken by the drone, a column of vehicles is seen on a road. An explosion is suddenly seen, appearing to hit the middle of the column, obscuring the view of the vehicles.

In recent days, Kherson has been the site of intense fighting between Ukrainian fighters and Russian forces attempting to advance across the Dnieper River.

South Korea's capital has joined a number of cities around the world lighting monuments in blue and yellow in support of Ukraine, reflecting the colors of its national flag.

Four landmarks in Seoul — the City Hall, Namsan Seoul Tower, Sebitseom on the Han River and Seoullo Media Canvas — were lit up on Monday.

Meanwhile, Ukrainians and supporters protested against the Russian invasion outside Moscow's embassy in Seoul on Sunday and Monday.

One protester, Olga Ladygima, told CNN she hadn’t slept for the past three nights. She is from the Ukrainian capital Kyiv, she said — and her friends in Ukraine have stayed up too, making homemade bombs to try to stop Russian tanks.

Crowds walked between the Russian embassy, Brandenburg Gate and the Victory Column on Sunday wearing blue and yellow, and holding up signs showing solidarity with Ukraine.

But the onslaught of words and images is fueling a confusing media environment where disinformation is rampant.

Snapshots from the ground: David French, a senior editor at The Dispatch, said social media is showing Americans just how "incredibly brutal" this war is, but those platforms don't offer an overall strategic view, such as the positions of Russian forces or the real number of casualties.

"Each one of these TikTok videos is a tiny little snapshot of a tiny little moment of time, often without any other overlaying context," French said. "And so you really would have to spend an enormous time with some real background to begin to piece together the TikTok jigsaw puzzle."

Resistance going viral: French added that the immediacy of these social media feeds may have prompted Western nations to "fall into line quickly" on stricter sanctions.

"The inspirational nature of Ukrainian resistance that is shaming a lot of Western governments, quite frankly, into action," French said.

But so is disinformation: Stelter cited a prime example of misinformation being spread on social media — a video of Russian paratroopers shared widely on TikTok and Twitter with millions of views, that turns out to have been filmed in 2015.

"Propaganda is a part of every war," Lytvynenko said. "And the point of propaganda coming out of Russia right now is to undermine Ukrainian narratives and to scare Ukrainian people." 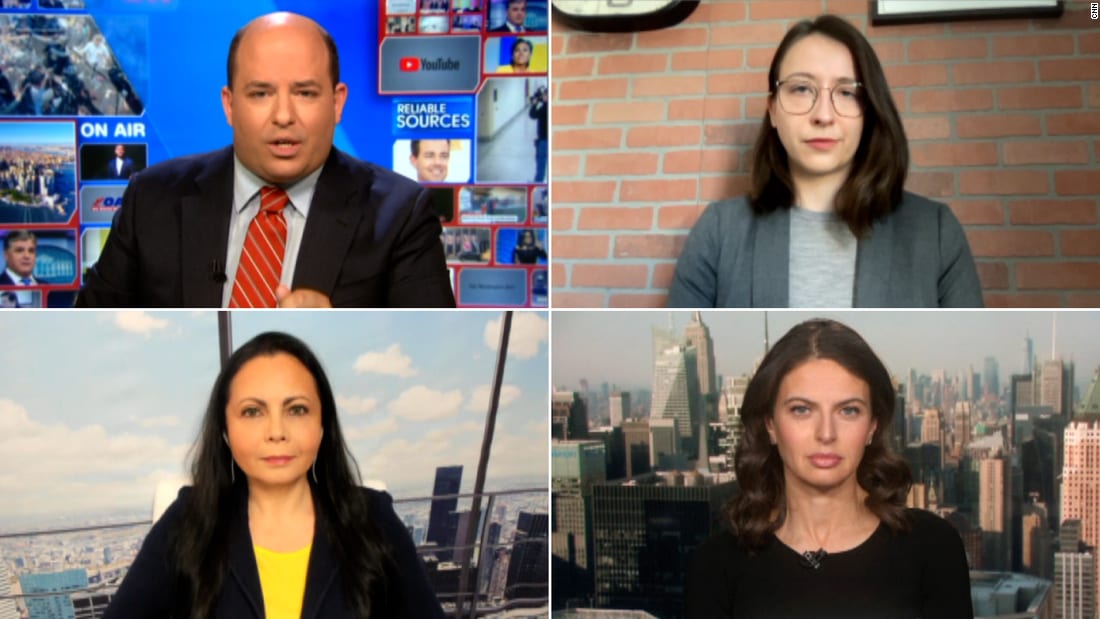 As Ukrainians continue to repel Russian advances around Kyiv, new satellite images show a more than 3-mile-long Russian military convoy is on a roadway that heads toward the capital city.

According to Maxar, the convoy was seen on satellite images on Sunday around 10:56 a.m. local time on the P-02-02 road near Ivankiv, which is about 40 miles (60 kilometers) northwest of the Ukrainian capital. The P-02-02 road goes toward Kyiv.

Maxar identified fuel and logistical trucks, in addition to tanks, infantry vehicles and self-propelled artillery moving in the convoy.

Ukrainian President Volodymyr Zelensky said in a brief televised statement that he doesn’t expect much from a meeting between Ukrainian and Russian delegations on Monday.

“I will say frankly, as always: I do not really believe in the result of this meeting, but let them try. So that no citizen of Ukraine would have any doubt that I, as President, did not try to stop the war when there was even a small chance,” Zelensky said.

The Ukrainian military has claimed successful attacks by its Turkish-made force of drones against Russian forces.

On Sunday, the Armed Forces of Ukraine released footage showing the destruction of armor by a drone, and said it was carried out against a Russian BUK surface-to-air missile system.

Valerii Zaluzhnyi, the Armed Forces Commander-in-Chief, said the drone attack took place near the town of Malyn, 100 kilometers (about 62 miles) northwest of Kyiv.

"This is really a pattern that we've seen from President Putin through the course of this conflict, which is manufacturing threats that don't exist in order to justify further aggression — and the global community and the American people should look at it through that prism," Psaki told ABC's George Stephanopoulos on "This Week."

"At every step of this conflict Putin has manufactured threats to justify more aggressive actions — he was never under threat from Ukraine or from NATO, which is a defensive alliance that will not fight in Ukraine," the official said.

"The only reason his forces face a threat today is because they invaded a sovereign country, and one without nuclear weapons. This is yet another escalatory and totally unnecessary step," they added.

Putin's move comes in the face of universal condemnation from Western powers over Moscow's unprovoked assault on Ukraine. 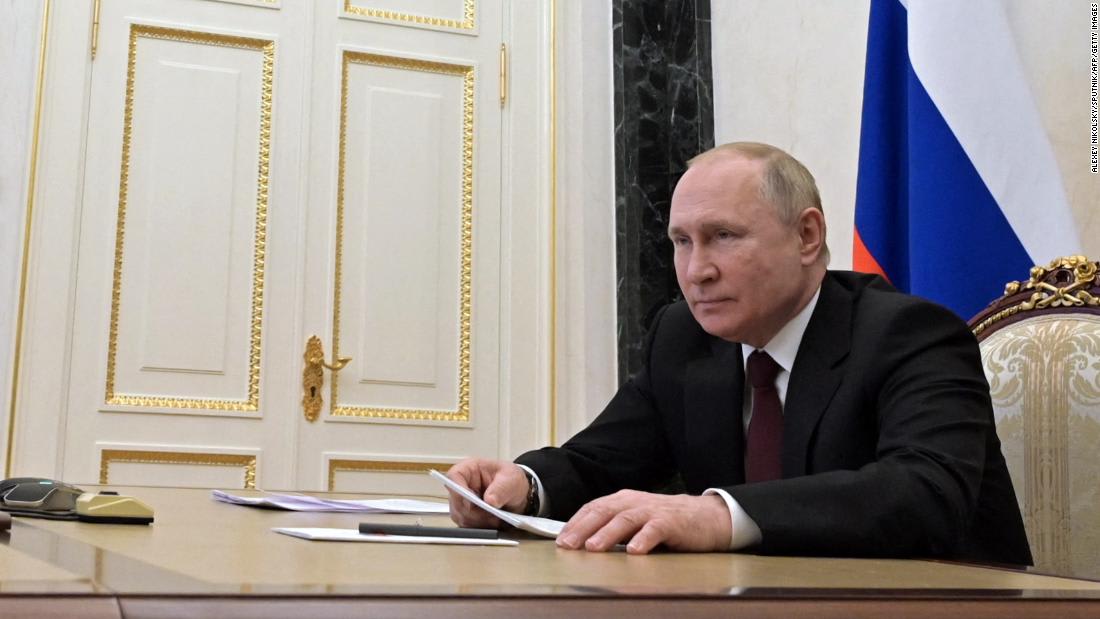 Oil giant BP will offload its 19.75% shareholding in Russian state-owned oil firm, Rosneft, according to a statement from the company.

Chief Executive Officer Bernard Looney will also resign immediately from Rosneft's board, according to the statement.

The British company had faced calls from the UK government to offload its ownership stake following Russia's invasion of Ukraine.

Looney said he “like so many" others was "deeply shocked and saddened by the situation unfolding in Ukraine," which prompted the company "to fundamentally rethink BP’s position with Rosneft."

"I am convinced that the decisions we have taken as a board are not only the right thing to do, but are also in the long-term interests of BP," the CEO added.

BP chair Helge Lund added that "the Rosneft holding is no longer aligned with BP’s business and strategy."

European Commission President Ursula von der Leyen confirmed on Sunday that the European Union is shutting down the EU airspace to Russia.

“We are proposing a prohibition on all Russian-owned, Russian-registered and Russian-controlled aircraft. These aircraft will no more be able to land in, take off or overfly the territory of the European Union. This will apply to any plane”, Von der Leyen said.

“Our airspace will be closed to every Russian plane. And that includes the private jets of oligarchs too," she said.

Many European countries had already closed their airspace to Russian airlines and aircraft as of Sunday, including Germany, France and Italy.