The National Hockey League (NHL) announced Monday that it is suspending its business relations in Russia, effective immediately.

In a statement, the NHL said:

“The National Hockey League condemns Russia’s invasion of Ukraine and urges a peaceful resolution as quickly as possible. Effective immediately, we are suspending our relationships with our business partners in Russia and we are pausing our Russian language social and digital media sites. In addition, we are discontinuing any consideration of Russia as a location for any future competitions involving the NHL."

“We also remain concerned about the well-being of the players from Russia, who play in the NHL on behalf of their NHL Clubs, and not on behalf of Russia. We understand they and their families are being placed in an extremely difficult position," the league added.

There are dozens of active Russian players in the NHL, including superstars Alexander Ovechkin and Evgeni Malkin.

At least nine civilians have been killed by Russian rocket attacks Monday in the Ukrainian city of Kharkiv, Mayor Ihor Terekhov said. The mayor said this includes the deaths of three children.

"Today we had a very difficult day. It showed us that it's not just a war, this is a massacre of Ukrainian people," he said on his Telegram account.

"The missiles hit residential buildings, killing and injuring peaceful civilians. Kharkiv has not seen such damage for a very long time. And this is horrible," he said.

Terekhov said four people came out of shelter to get some water and were killed.

A family of two adults and three children were burned alive in their car, he said. Another 37 people were injured.

There have been at least 406 reported civilian casualties in Ukraine, including at least 102 killed just within the past few days, United Nations Under-Secretary-General for Humanitarian Affairs and Emergency Relief Coordinator Martin Griffiths said Monday, citing numbers from the Office of the UN High Commissioner for Human Rights.

Griffiths addressed the UN Security Council via teleconference from Geneva on Monday, adding that the real number of civilian casualties “could be considerably higher, as many reported casualties have yet to be confirmed.”

“The picture is grim — and could get worse still. Aerial attacks and fighting in urban areas are damaging critical civilian facilities and disrupting essential services such as health, electricity, water and sanitation, which effectively leaves civilians without the basics for day-to-day life,” Griffiths said.

Humanitarian efforts on the ground: There are currently 119 humanitarian organizations operating in Ukraine, though their capacity to provide assistance has been limited due to military action, according to Griffiths. He also called for “assurances from parties to the conflict that humanitarian workers and movements will be protected even during the most severe days of the conflict and not waiting for the conflict to subside.”

Griffiths also announced that the UN Secretary-General will launch a humanitarian appeal on Tuesday with two components:

Grandi said Monday that his office has already received over $40 million in donations from private citizens and companies from around the world.

“I am counting on governments to do the same – and quickly. Ukrainians – and countries hosting refugees from Ukraine – cannot wait,” Grandi said.

There are currently 520,000 refugees from Ukraine in neighboring countries and the figure has been rising “exponentially, hour after hour,” Filippo Grandi, United Nations High Commissioner for Refugees (UNHCR), told the UN Security Council on Monday.

Grandi, who addressed the council via teleconference from Geneva, said he has worked in refugee crises for almost 40 years and has “rarely seen such an incredibly fast-rising exodus of people — the largest, surely, within Europe, since the Balkan wars.”

Grandi said the UN’s humanitarian workers have been relocated and military attacks might force them to move again.

“The situation is moving so quickly, and the levels of risk are so high by now, that it is impossible for humanitarians to distribute systematically the aid, the help that Ukrainians desperately need,” Grandi said. “Civilians and civilian infrastructure must be protected and spared, and humanitarian access must be granted for those delivering aid to those impacted by war. A failure to do so will compound the already extraordinary levels of human suffering," he said. 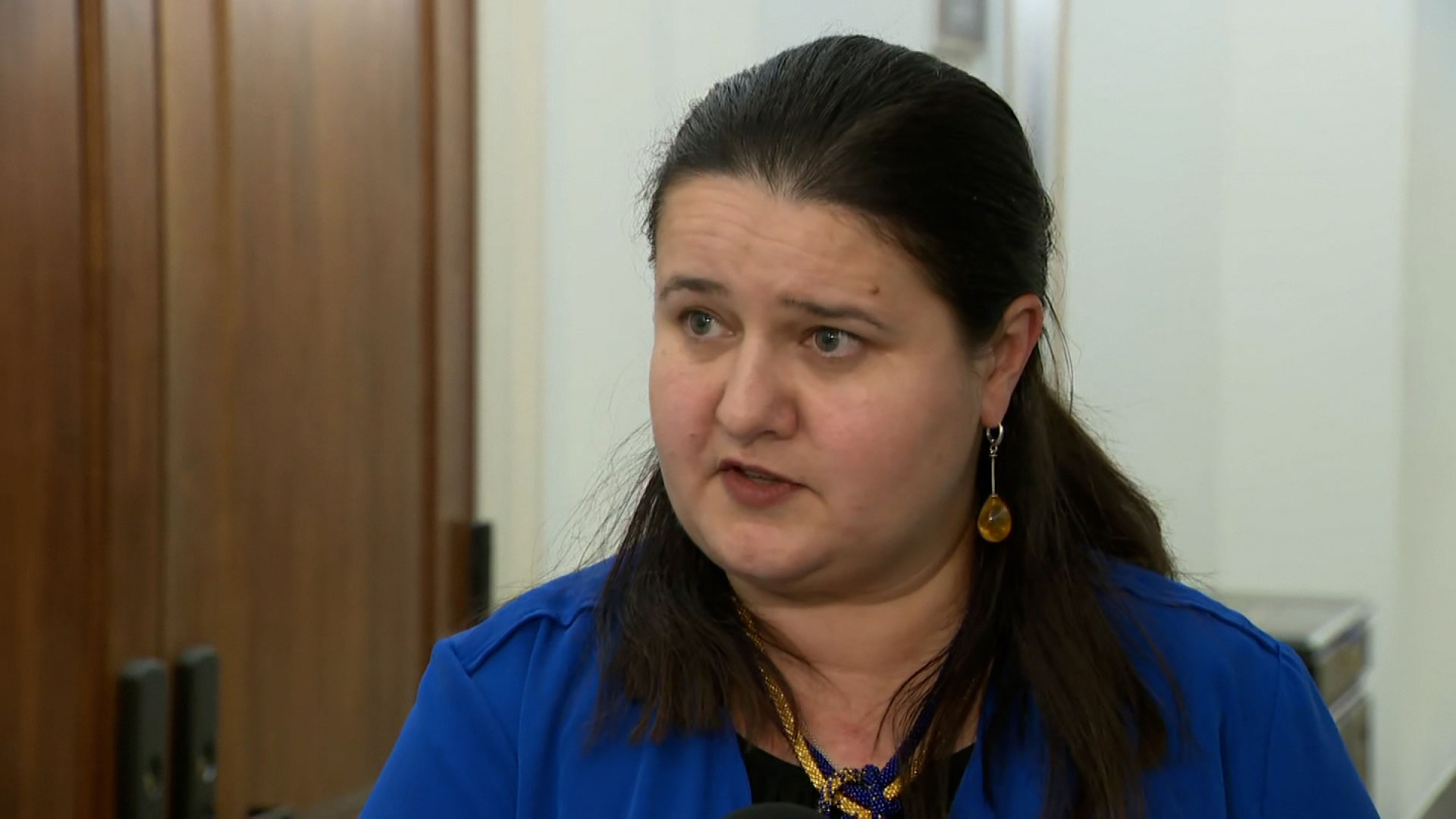 Ukrainian Ambassador to the US, Oksana Markarova, left today’s meeting with US House members of the Ukrainian caucus feeling that they were on “the same page,” with the House.

“We have very good understanding,” she added.

“The United States has been very helpful in helping us supplying the financial assistance, defensive military assistance, but also being a great leader of the anti-war coalition on sanctions. And we just discussed what are we doing now, what can we do more, and we can continue doing more on all of this," Markarova said.

Asked what more the United States can do, Markarova emphasized Ukraine’s need for more weapons and the continuation of sanctions against Russia. “We work actively with the administration, the President, and also with Congress on getting more weapons, so we need more weapons,” she told reporters. “And we are not asking anyone to fight for us, we are defending our country ourselves. But we need all the support that all civilized world can give us to actually continue effectively fighting, and also sanctions," she said.

She added, “We believe Russia, which is now acting like Nazi Germany in WWII, essentially killing innocent civilians — today they shot into a again into not only residential areas but also the orphanages and schools and kindergartens, horrible — they have to pay the price. They have to be isolated.”

Leaving the meeting, Democratic Rep. Mike Quigley told reporters that what they heard from the ambassador was “a message of thanks and appreciation,” and added, “they need more sanctions and they need more supplies.”

“I want to give the administration a lot of credit, and I think the ambassador just did,” he said, “of unifying the West, and moving forward on sanctions that work, and supplying them with materials they need.”

His colleague, Rep. Brad Sherman, seconded this. “They would like more. I think they are thankful for what we’re doing, and it appears as if we are doing not only the right amount of money for now, but the right mix of weapons,” he said.

“Obviously the Ukrainians would like us to do everything,” said Sherman. “That includes a no-fly zone. But frankly, a no-fly zone means dog fights between American and Russian pilots, and that’s dangerous.”

Later, he noted, “certainly in the back of my mind as others discussed the no-fly zone was the fact that once you have Americans shooting at Russians and Russians shooting at Americans, you are down a very dangerous road.” Sherman noted that the Ukrainians pushed for this option, but he sees it as “one step too dangerous.”

Asked about energy proposals discussed in the meeting, Sherman said, “We talked about strengthening the sanctions by preventing the entire world from buying oil and natural gas. Obviously from a Ukrainian standpoint, that’s an important step. It’s not a step that our European friends have been willing to take.”

A member of Ukraine’s Rada, or parliament, was also in attendance, Alexandra Ustinova.

“We are very grateful for all the support Ukraine gets right now and receives from the international community and from the United States who are the driving, leading force in protecting Ukraine,” she told reporters, “But unfortunately we need more help with every passing day, because we understand Putin becomes more aggressive, and something that seemed impossible a week ago to the whole normal world is a reality to my country today," Ustinova said.

As Ukrainian President Volodymyr Zelensky continues to call for a no fly zone in Ukraine, the White House said Monday afternoon that US President Joe Biden remains firm in his commitment to keep US troops out of the conflict.

"The President has been very clear that he is not intending to send US troops to fight a war with Russia. And I think what’s important to note here is that is essentially what this would be a step toward, because a no fly zone would require implementation," White House press secretary Jen Psaki said.

Other US officials have also said US enforcing a no fly zone in Ukraine is currently off the table.

US ambassador to the United Nations Linda Thomas-Greenfield said the Biden administration "has made clear" the US will not "put boots on the ground," she told CNN's Dana Bash on "State of the Union."

Ukrainian President Volodymyr Zelensky said that he is analyzing the results of Monday's talks with a Russian delegation, which lasted five hours.

"There can be fair negotiations if one side does not hit the other side with rocket artillery at the time of negotiations. So far, we do not have the result we would like to get. Russia has stated its position, and we have declared counterpoints to end the war. We received some signals. When the delegation returns to Kyiv, we will analyze what we have heard and then we will decide how to proceed to the second round of talks," Zelensky said in a message posted to his Facebook page.

Turkish minister of foreign affairs Mevlüt Çavuşoğlu said on Monday evening that Turkey warned “all countries, that have coast to Black Sea, or not, not to let warships pass through the straits” according to Turkey’s state-run news agency Anadolu.

On Sunday, Çavuşoğlu said Turkey recognizes Russia’s invasion as “war” which gives Turkey certain control over the straits that connect the Black Sea, Marmara and Aegean.

"We warned all countries, that have a coast on the Black Sea or not, not to let warships go through the straits," Çavuşoğlu told reporters after a Cabinet meeting in Ankara, Anadolu reported.

"To date, there has been no request for passage through the straits [since the war started],” Çavuşoğlu said according to Anadolu. “Until today, the Russians were asking whether we would implement Montreux if needed. We told them that we would apply it word by word,” he added.

"If Turkey is not a party to the war, it has the authority not to allow the passage of the belligerent countries' ships through the straits. If the warship is returning to its base in the Black Sea, the passage is not blocked,” he explained.

More background on Montreux: The 1936 Montreux Convention gives Turkey the authority to ban warships of all countries, regardless of they are party to war or not and regardless they have a coast on the Black Sea or not, to pass from the straits during times of war if Turkey is a party of the war or if Turkey says it is under threat.

Ukrainian President Volodymyr Zelensky on Monday called for the "complete closure of the sky for Russian missiles, aircraft and helicopters."

"Evil, armed with missiles, bombs, and artillery, must be stopped immediately, destroyed economically. To show that humanity is able to defend itself, it is necessary to consider a complete closure of the sky for Russian missiles, aircraft, helicopters," he said in a message posted to his Facebook page.

"A state that commits crimes against civilians cannot be a member of the UN Security Council. For such a state the entrance to all ports, canals, airports in the world must be closed. Such a state should not receive hundreds of billions for energy exports. To buy Russian goods now is to pay for killing people," Zelensky added.