Japanese Prime Minister Fumio Kishida said Monday it would be "unacceptable" for Tokyo to make a NATO-like nuclear sharing arrangement with the United States as a security guarantee following Russia's invasion of Ukraine.

"It is unacceptable given our country's stance of maintaining the three non-nuclear principles," Kishida told Japan's Parliament.

Japan's three non-nuclear principles include not producing or permitting the introduction of nuclear weapons.

Some context: Kishida's comments came in response to statements made by former Japanese Prime Minister Shinzo Abe a day earlier.

On Sunday, Abe said on a television program that Japan should discuss a possible sharing of nuclear weapons similar to that of NATO members following the Russian invasion of Ukraine. NATO's nuclear sharing arrangements permit the US to keep its nuclear weapons in Europe.

Abe acknowledged the non-nuclear principles and said Japan must stick to the goal of abolishing nuclear weapons — especially as a country that has experienced atomic bombings — but argued "it's essential to understand how the world's security is maintained, and we shouldn't treat those discussions as a taboo."

Trading on the Moscow stock exchange will be pushed back to 10 a.m. local time (2 a.m. ET) and restricted to some markets, the Russian Central Bank said Monday.

The bank also introduced a “temporary ban” on sell orders from foreign legal entities and individuals, it added in a statement.

Trading will only be allowed on the foreign exchange market, currency market and the repurchase agreement, or "repo" market.

“The Bank of Russia will assess the feasibility of opening trading on other markets, depending on the development of the situation,” the statement said, adding that a decision on whether to open up the floor to other markets would be made at 1 p.m. local time (5 a.m. ET), with trading starting no later than 3 p.m. local time (7 a.m. ET).

The bank added it would raise its key interest rate from 9.5% to 20% per annum.

Ruble plunges: The central bank's announcements came as the Russian currency fell nearly 30% on Monday, with markets beginning to assess the impact of sanctions imposed by the US and NATO allies on Russia.

Belarus on Sunday signaled that it would renounce its non-nuclear status, following the launch of Russia’s invasion of Ukraine from the former Soviet nation last week.

Authorities in the country — ruled by Moscow-backed strongman Alexander Lukashenko for nearly three decades — said the move was backed by a referendum.

According to the Belarus Central Elections Commission, some 78.63% of the eligible voting population took part in the vote, with 65.16% in favor of a new constitution that will shed the country’s non-nuclear status and give Lukashenko the opportunity to run for two additional terms in office.

But Western leaders will not recognize the legitimacy of Sunday’s vote. In a statement from January, the US mission to the Organization for Security and Co-operation in Europe (OSCE) described the referendum as “neither a viable — nor credible — path forward for Belarus.”

The vote follows a years-long violent crackdown by the Lukashenko regime against his domestic political opponents, following the disputed presidential election in 2020 which was marred by fraud and triggered mass protests.

What this could mean for Russia: Belarus' new constitution could theoretically allow Moscow to place nuclear weapons on its neighbor's territory for the first time since the fall of the Soviet Union, when Minsk gave up its stockpile and became a nuclear-free zone.

The amendments and additions to the constitution passed in the referendum will come into effect in 10 days' time, according to Lukashenko’s office.

Lukashenko and Putin: Addressing journalists at a polling station in Minsk on Sunday, Lukashenko said he could ask Russian President Vladimir Putin to “return the nuclear weapons” Belarus gave away if the West transfers any nuclear weapons to Poland or Lithuania.

"If America or ... France, two nuclear powers, start transferring nuclear weapons to Poland or Lithuania, on our borders ... I will go to Putin so that he will return to me the nuclear weapons that I, without any special conditions, gave to them,” Lukashenko said.

In his on-camera remarks, Lukashenko also accused the West of “pushing Russia to ignite World War III,” before warning that “a nuclear war would end the world.”

The US Embassy in Ukraine said late Sunday that the security situation throughout the country "continues to be unpredictable, with active fighting inside many cities and other locations."

"Conditions may deteriorate as military attacks by Russia continue in various parts of the country without any warning," it added in a statement, urging Americans there to "depart now using privately available transportation options if it is safe to do so."

The embassy cautioned that roads may be crowded, exposed to combat operations, and that infrastructure like bridges may have been destroyed or damaged by the fighting. "Sheltering in place may remain the best option for some," it said.

Long wait at the border: The embassy recommended citizens cross into Hungary, Romania and Slovakia if possible, citing "severely backed up" border crossings into Poland and Moldova.

"Some are experiencing extremely long wait times (well over 30 hours in some cases)," the embassy said.

The embassy also warned conditions at each border "can change very quickly and wait times can increase at any time without warning."

Wave of refugees: Hundreds of thousands of Ukrainians and refugees of other nationalities are attempting to flee Ukraine from various border crossings, according to local government officials in Lviv.

Nearly 400,000 Ukrainian refugees have fled their homes since Russia's invasion on Thursday, the United Nations High Commissioner for Refugees reported on Sunday.

The Dalai Lama on Monday said he was "deeply saddened" by the conflict in Ukraine, as the exiled Tibetan spiritual leader called for peace and "mutual understanding."

"War is outdated — non-violence is the only way," he said in a statement.

"Problems and disagreements are best resolved through dialogue," he added.

"Genuine peace comes about through mutual understanding and respect for each other's wellbeing.

"We must not lose hope. The 20th century was a century of war and bloodshed. The 21st century must be a century of dialogue. I pray that peace is swiftly restored in Ukraine."

Ukrainian intelligence suggests Belarus is showing "readiness to maybe participate directly" in Russia's invasion, "in addition to allowing Russians to use their territory as well as letting them cross the border" into Ukraine, a Ukrainian government official told CNN.

The Washington Post first reported that Belarus was preparing to send soldiers into Ukraine, citing a US administration official.

Talks at the border: The intelligence comes as talks are set for Monday between Russia and Ukraine near the Belarusian border.

Belarus' take on the invasion: Lukashenko said last week that Belarusian troops could join the invasion “if it becomes necessary.”

“Our troops are not participating in any way in this operation. We’re not going to justify ourselves here about our participation or non-participation in this conflict. I repeat once again. Our troops are not there but if it becomes necessary, if Belarus and Russia need them, they will be there,“ Lukashenko said on tape from state news agency Belta’s YouTube channel.

Zelensky's appeal to Belarusians: On Sunday, Zelensky spoke directly to Belarusians as “neighbors," saying it was "a referendum for you as well."

"You decide who you are and whom to become. How you would look in your children’s eyes. How you’d look in each other’s eyes. In your neighbor’s eyes. And we are your neighbors,” Zelensky said.

The White House declined to comment. CNN has also reached out to the US State Department for comment.

White House press secretary Jen Psaki said Sunday morning on MSNBC that the US and its allies reserve the right to further sanction Belarus. The US Treasury Department already issued sanctions against 24 individuals and entities on Thursday.

At least 2,000 Indian citizens have been evacuated from Ukraine since the war began, with efforts underway to evacuate "thousands" that remain, India’s Foreign Secretary Harsh Shringla said at a news briefing Sunday.

“Many of our citizens have been stuck for long periods of time crossing over into Poland ... because this is the main border crossing," Shringla told reporters. He added that there are hundreds of thousands of people trying to cross the border. "It is not an organized situation. It is a conflict zone,” he said.

When asked about Indians allegedly facing harassment from Ukrainian forces while attempting to cross the border, Shringla said Ukrainian officials "have been very helpful and I did tell them that we expect in every way that they would assist in facilitating the safe and — to the extent possible — hassle-free evacuation of our citizens.”

The UN vote: On Saturday, India was one of three countries, including China and the UAE, to abstain from voting on a UN Security Council resolution condemning Russia’s invasion of Ukraine.

India then abstained from another vote to refer the matter to an emergency session of the UN General Assembly on Sunday.

When explaining the decision, the Indian ambassador to the UN said India's Prime Minister Narendra Modi had already spoken to both Russia and Ukraine's leaders, and encouraged peace talks between the two.

The Ukrainian leader's defiance has inspired and shamed the United States and the European Union into going far further — and far faster — in turning Russia into a pariah state than it appeared they were ready to go. By promising weapons and ammunition to Zelensky, the West appears increasingly to be drawn into a possible proxy war with Moscow over Ukraine, even though it is not a NATO member that benefits from the bloc's direct mutual defense agreements.

After insisting last week that sanctions would be graded on a rising curve based on Russian behavior, Washington and its allies have now rushed to personally sanction Putin and have kicked key Russian banks out of the vital SWIFT global financial network.

Zelensky's emotional appeal: The significant stiffening of the global front against Russia over the weekend followed increasingly fervent calls by Zelensky for help. European leaders reported that in a call with them last week, he had said he didn't know how long he or his country had left.

Few outsiders expected Zelensky, a former comic actor who, to the frustration of US officials, ignored or downplayed US warnings of an imminent invasion for weeks, would morph into a leader to match this moment in his country's history. His dismissiveness changed a few days before the invasion when he made increasingly heart-rending appeals for help. 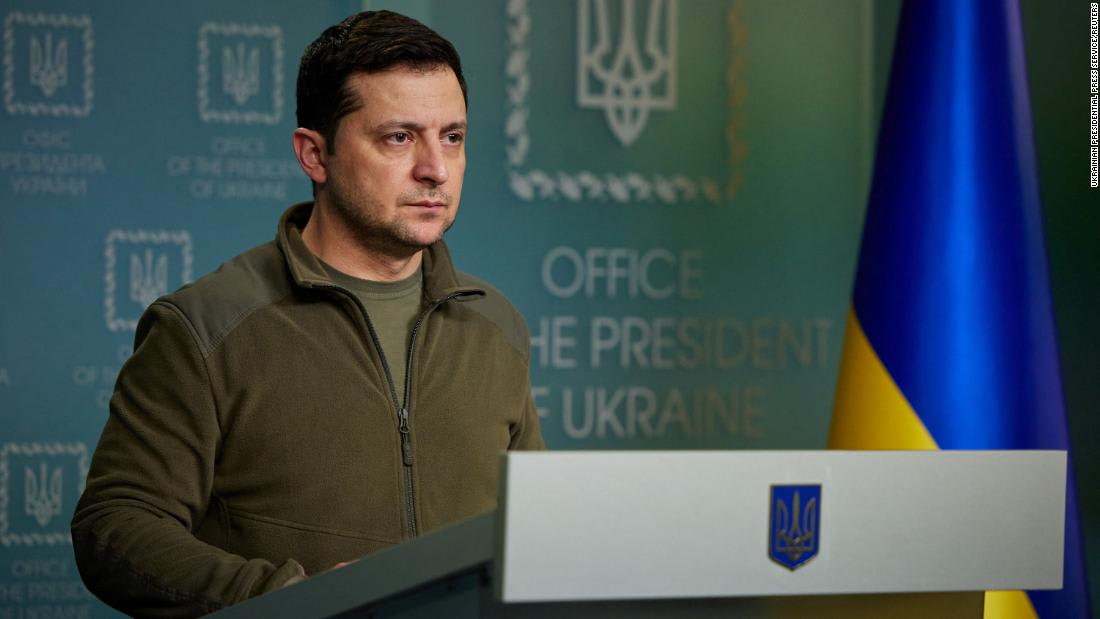 Analysis: How Zelensky changed the West's response to Russia

As dawn breaks in Kyiv, all eyes are on a Russia-Ukraine meeting set to happen Monday, with tensions high as fierce fighting continues on the ground. If you're just joining us, here's the latest.