The US assesses that Russia has added 11 battalion tactical groups (BTGs) to their forces in the east and south of Ukraine since late last week, according to a senior US defense official, bringing Russia’s total number of BTG’s to 76.

“They have added to their capability inside Ukraine,” the official said on a press call, adding that all Russian ground forces are currently focused in the east and south of Ukraine, but the US is unable to pinpoint exactly how the new BTG’s are spread out.

Meanwhile, the US has sent four flights of security assistance for Ukraine into the region from the newest round of assistance authorized by US President Joe Biden worth $800 million, the official noted.

Another should be arriving “over the next 24 hours,” according to the official, but no details were provided around what equipment was on the flights.

Roman Stelmashchuk was on his way to the auto repair shop he owns in Lviv when he got a call saying it was hit by a missile.

More than a dozen of his employees were already there, getting ready to open up the shop, he told journalists at the site of the strike, adding that four died and three others are in the hospital.

The youngest, who died, was 30 years old. One employee had three daughters and the other had a child who was about to start school this year, Stelmashchuk said.

“We don’t have a big turnover of workers. We have a team who has worked here for a long time, he said Monday. "This is a civilian facility. There are no strategic military targets here. The Russians destroy our infrastructure, they kill our people and they want to destroy the Ukrainian nation.”

The toll could rise further as rescue efforts continue, the official added.

Russian forces have completed the regrouping of troops to launch an offensive in eastern Ukraine, a Ukrainian defense ministry spokesperson said on Monday.

"Strengthening of the offensive group is happening due to the transfer of additional Russian units. The most intense fighting is taking place in the Slobozhansky and Donetsk regions,” Col. Oleksandr Motuzyanyk said during a news briefing.

"(Russia) is preparing for an offensive in eastern Ukraine to establish full control over the territory of Donetsk and Luhansk regions and ensure the stability” of the land corridor with Crimena, Motuzyanyk said.

He added that Ukrainian forces took back several settlements from the Russian forces around the town of Izium in the Kharkiv region.

The spokesperson said that the town of Izium and its surrounding areas are the places with the largest concentration of Russian units.

"From that location they will try to develop an offensive to the east," he continued.

Spain will reopen its embassy in Kyiv “in the coming days,” Prime Minister Pedro Sánchez  said Monday, becoming the latest country to return its diplomats to the Ukrainian capital.

The reopening will be “a new sign of the commitment of the Spanish government and society to the Ukrainian people,” Sánchez said in an interview with Spanish TV Antena 3.

Spain evacuated its embassy in Kyiv on Feb. 27, soon after Russia’s invasion of Ukraine began. It transferred those functions to neighboring Warsaw, Poland, the Spanish Foreign Ministry press office said.

France announced last week that its embassy in Ukraine would "very soon" return to Kyiv from Lviv, while Italy said Saturday that it intends to reopen its embassy in Kyiv after Easter.

The European Union is also resuming its diplomatic presence in Kyiv, after moving it temporarily to Poland following Russia's invasion of Ukraine, the bloc announced Friday.

Slovenia has also reopened its embassy in Kyiv since March 28, according to Slovenia's Foreign Ministry.

Ukrainian officials in the Kharkiv and Luhansk regions have reported heavy bombardments by Russian forces Monday, acknowledging a retreat from one important town but claiming to have successfully repulsed Russian attacks elsewhere.

The mayor of Kharkiv, Ihor Terekhov, said on Ukrainian television that the city was being "constantly bombarded." He accused the Russians of "bombing residential areas, residential buildings, where there are crowds of people. There were hits today in the city. There are wounded and dead. Several hospitals and the city perinatal center were destroyed."

Terekhov said that 30% of the city's population had left since the invasion began but added that "as a rule people do not want to leave the city."

And striking a defiant note, he added: "Despite the bombing, we started planting flowers today. Tomorrow or the day after tomorrow we will try to start the fountains."

In the neighboring Luhansk region, the head of the regional military administration, Serhii Haidai, said: "I think that the battle [for Donbas] has already begun. Multiple intensifications of shelling with all types of weapons, attempts to break into the cities."

He said that because of Russian attacks "the number of settlements without electricity, water and gas is growing."

"There are only the remnants of infrastructure," he said, with 35 settlements without power; 21 completely and 14 partially and 37 were without gas. There is no water supply in the towns of Rubizhne and Popasna, he said. Russian forces are on the edge of both towns.

Haidai also spoke about the Ukrainian troops' retreat from the town of Kreminna in the Luhansk region Monday amid intense shelling.

"There was a battle at night; our troops retreated to positions that helped them defend themselves," he said.

"For a long time, our troops held the line of defense in Kreminna," Haidai said. "Freshly mobilized soldiers were thrown at them, reconnaissance was carried out, there were many attempts to attack....The enemy fired from GRAD, aircraft, mortars, artillery, and tanks. It no longer made sense to stay there. Our defenders would simply die, and there would be no use. That's why our defenders moved away from Kreminna."

"Our defenders, first of all, act so as not to harm the citizens. The enemy, on the other hand, strikes at everything in its path," he said. "They no longer tried to make breakthroughs, attacks, but began to level everything to the ground."

Haidai said some evacuations were continuing but that it was like walking a tightrope. Despite the lack of a ceasefire or agreed routes to help civilians escape the fighting, he said that more than 100 people were evacuated from Luhansk region without "humanitarian corridors" Monday.

The Ukrainian Defense Ministry reported some successes elsewhere in the east, saying that Russian attempts to advance around Izium had been repelled.

"The enemy conducted reconnaissance by battle, had no success, and was forced to retreat after suffering losses," said Col. Oleksandr Motuzianyk, spokesperson at the Ministry of Defense.

Russian forces have been arriving in the Izium area after the town fell at the beginning of the month. But they've made little progress since.

“I, Medvedchuk Viktor Vladimirovich, would like to address President of the Russian Federation, Vladimir Putin, and President of Ukraine, Vladimir Zelensky, with a plea for the Ukrainian side to exchange me for the defenders of Mariupol and its citizens who are there today and have no opportunity for a safe exit through a humanitarian corridor,” Medvedchuk said in his appeal.

Zelensky announced last week that Medvedchuk had been detained in a "special operation."

It is unclear if Medvedchuk — who has faced allegations of treason in Ukraine — was speaking against his will and where he recorded the video.

His wife, Oksana Marchenko, has posted videos appealing for the release of her husband in exchange for British nationals taken captive by Russian forces in Mariupol.

Donbas, a sprawling and beleaguered heartland region that blankets much of eastern Ukraine, has been the front line of the country’s conflict with Russia since 2014.

But now its people, already scarred by eight years of fighting, are bracing for an assault even more intense. An impending battle for control of the territory is expected to define Russian President Vladimir Putin’s invasion, after his forces suffered costly failures in Kyiv, and across central and northern Ukraine.

On Monday, both Ukrainian officials and the Russian Ministry of Defense have reported widespread military action in the east of Ukraine over the past 24 hours.

Satellite images meanwhile, have shown Russian military convoys and resupplied units moving towards Donbas for a large-scale offensive, and Ukraine’s foreign minister has warned the world of an impending battle there that will “remind you of the Second World War.”

A Russian victory in the region would appall the West but could salvage Putin’s war aims, while a defeat could cement his invasion as a historic failure. Either way, it is almost certain to devastate yet more of the Donbas region, a historically and culturally significant place whose proximity to Russia has dictated much of its turbulent existence.

Those who have lived in and studied the region describe it as an independent and gritty center of industry that has remained suspicious of outside forces for decades.

But the waves of conflict there since 2014 have reshaped and wounded its cities, and it is along its line of contact that both the Ukrainian and Russian military are most dug in – making for a familiar but unpredictable new phase of war. 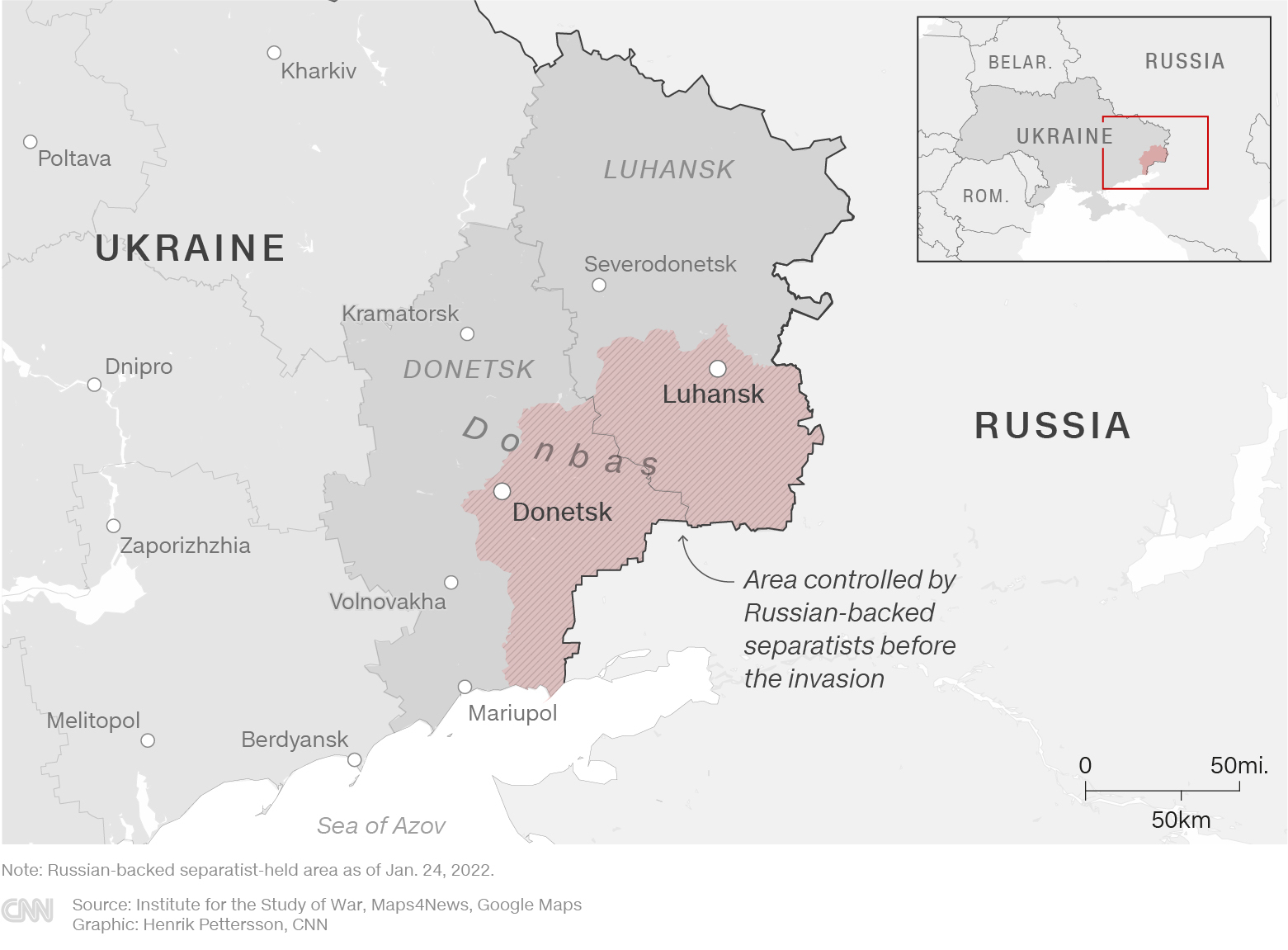 In a statement on Telegram in Russian, Vereshchuk — who is also the Ukrainian minister for the reintegration of temporarily occupied territories — said she was appealing to the military and political leadership of the Russian Federation "in relation to the worsening of the situation in Mariupol." She demanded an opening of a corridor from Mariupol to Berdiansk for civilians and an "urgent" corridor from the territory of the Azovstal plant for "women, children and other civilians."

The Azovstal steel plant has been a bastion of Ukrainian defense inside the port city, which has undergone weeks of bombardment by Russian forces.

Vereshchuk added that Russian refusal to open up corridors for evacuation "will be grounds for holding all involved persons criminally liable for war crimes in the future."

Ukrainian officials have said over 100,000 people require evacuation from the city. Independent estimates of casualties from the relentless Russian bombardment are not available, but the region's military governor has said as many as 22,000 people have died in the city since the Russian assault began.

The commander of the Ukrainian Marine unit in the besieged city of Mariupol wrote a letter to Pope Francis appealing for him to save the people remaining in the city under heavy bombardment.

In the letter, published on the Ukrainska Pravda website, Maj. Serhii Volyna, commander of the 36th Separate Marine Brigade, wrote, "I have not seen your appeals to the world and I have not read all your last statements, I have been fighting for more than 50 days in complete encirclement and all I have time for is a fierce battle for every meter of a city encircled by the enemy."

Volyna said he was ready to "fight to the end," despite constant artillery and rocket fire, lack of water, food and medicine, adding: "You have probably seen a lot in your life. But I am sure that you have never seen what is happening in Mariupol. Because that's what hell on Earth looks like. I have little time to describe all the horrors I see here every day. At the plant [Azovstal], women with children and babies live in bunkers. In hunger and cold. Every day being targeted by the enemy aviation. The wounded die every day because there is no medicine, no water, no food."

The officer alluded to the drama theater in Mariupol that was hit by a Russian strike while being used as a shelter for civilians in March.

"The time has come when praying is not enough," Volyna said. "Help to save them. After the bombing of the drama theater, no one believes the Russian occupiers. Bring the truth to the world, evacuate people and save their lives from the hands of Satan, who wants to burn all living things."