The leader of the self-declared separatist region in Donetsk, Denis Pushilin, says he expects his forces to surround the port city of Mariupol on Tuesday, adding in a television interview that the town of Volnovakha – which is half-way between Mariupol and Donetsk – was almost completely surrounded.

“Our task for today is encircle Mariupol,” he said.

Pushilin claimed without offering any evidence that nationalist elements in Mariupol were terrorizing the civilian population and were using them as a human shield. The city has a population of some 400,000.

The corridors would be open through Wednesday, he said.

Basurin said several towns in the region had already fallen to the militia of the DPR.

Vadym Boichenko, the mayor of Mariupol, said on Ukrainian television that residential areas had been shelled for five days – with heavy artillery, rockets and aircraft.

“There are many wounded, dead local residents, women, children.”

“But today, the best sons of their fatherland on the borders of our city are doing everything, not to give Mariupol away,” Boichenko said.

“They have destroyed important infrastructure, there is no electricity in the city, there is no heat. We are fighting to [the] last bullet."

More than 20 people were injured, including a child, in an explosion at a government building in the city, Ukraine's State Emergency Service said in a Telegram post Tuesday.

The blast destroyed the building, according to videos of the incident posted by the Ukrainian Ministry of Foreign Affairs (MOFA) and Ukrainian government officials. The clips were posted on social media early Tuesday local time and have been verified by CNN.

These images show the scenes in Kharkiv:

Residential and administrative areas in Kharkiv were bombarded on Monday night and Tuesday morning.

Ukraine's Prosecutor General Iryna Venediktova described the situation in Kharkiv as "hellish" and shared a video on Facebook of a missile that hit a kitchen window and tore off the leg of a woman, who she said later died in hospital.

Ukrainian President Volodymyr Zelensky accused Russia of war crimes over the attacks. He said that in five days, 56 missile strikes and 113 cruise missiles were launched in Ukraine by Russian forces. On Monday, he said Russian forces "brutally fired on Kharkiv from jet artillery. It was clearly a war crime."

On Monday, the International Criminal Court said it would open an investigation into Russia's invasion of Ukraine

Russia maintains that it isn't targeting civilian infrastructure in Ukraine, and that there is no evidence of civilian deaths caused by the Russia military.

Video shows the aftermath of the explosion. Watch CNN's report:

It's just gone midday in Kyiv, where icy temperatures have added to Ukrainians' woes as the city braces for a huge Russian attack.

Here's what you need to know. 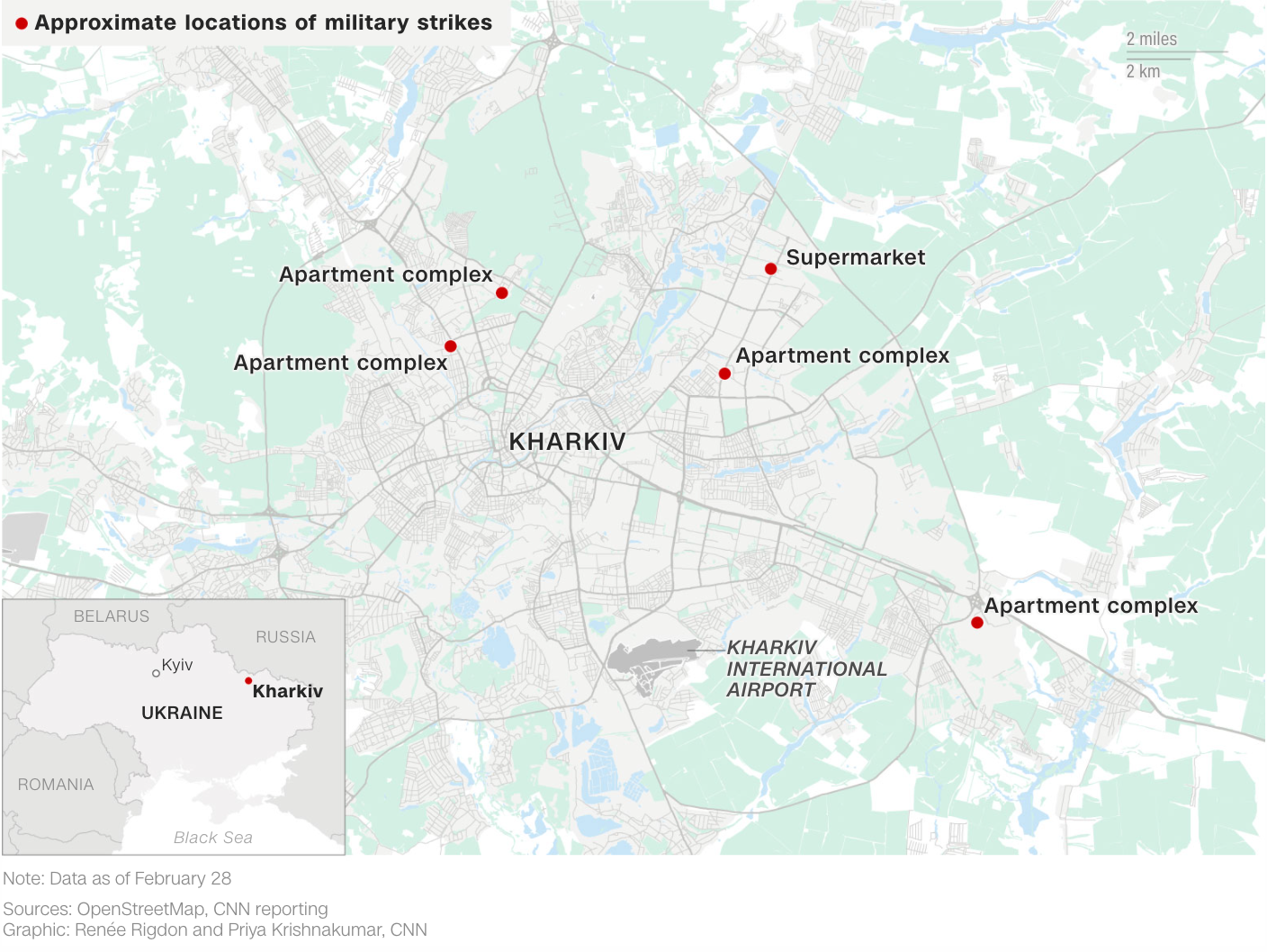 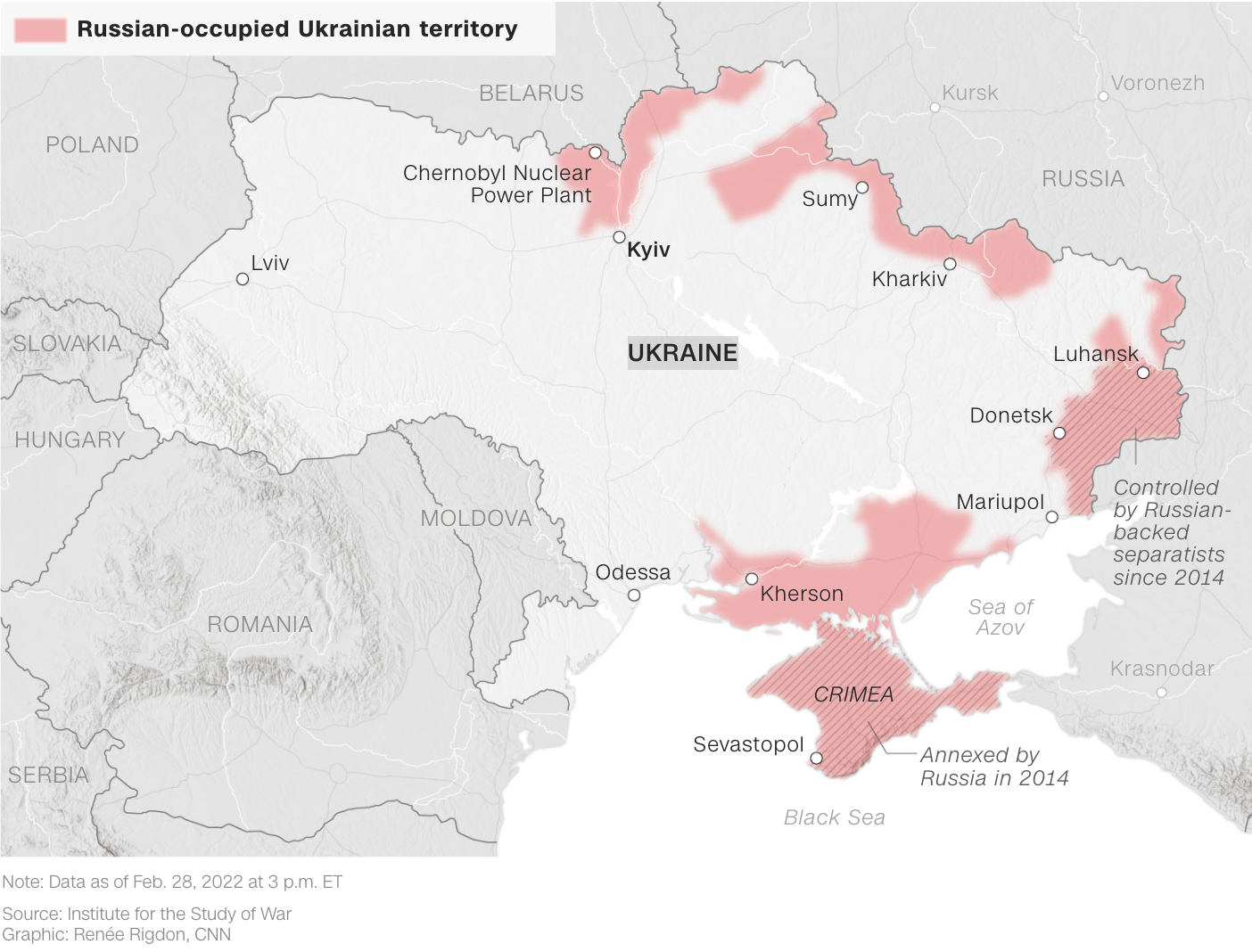 In any other circumstances, it would be a beautiful sight: pristine white snow blanketing the roofs of old Kyiv.

But right now, the snow just adds to a long list of worries for the residents of the Ukrainian capital.

With thousands of people sheltering in unheated basements, underground carparks and subway stations across the city, the sudden cold snap is concerning. Temperatures have been hovering above 0 degrees Celsius for the past two weeks in Kyiv.

In the days before the invasion started, the skies were blue and the city sunny. On some days, sitting outside in the sun, winter jackets started to become obsolete. Spring appeared to be in the air.

But the temperatures started to drop over the weekend and it is now freezing in Kyiv. People have spent hours waiting in long lines at grocery stores and pharmacies in the city after they opened for the first time following a 36-hour curfew.

For now, the city's key infrastructure is holding up. Electricity, heat and water are available as normal, but fears of potential disruptions to supplies have ratcheted up, as a long Russian military convoy closes in on the city.

“Barbaric Russian missile strikes on the central Freedom Square and residential districts of Kharkiv. Putin is unable to break Ukraine down. He commits more war crimes out of fury, murders innocent civilians. The world can and must do more. INCREASE PRESSURE, ISOLATE RUSSIA FULLY!,” Kubela said in a post on Twitter.

At least six people were injured, including a child, in the explosion, according to Ukraine's State Emergency Service.

The search for casualties remains ongoing, the state service said.

Ukraine has accused Russia of committing war crimes by targeting civilians, and on Monday, the International Criminal Court said it would open an investigation into Russia's invasion of Ukraine -- a move that was welcomed by Kyiv.

ICC Prosecutor, Karim A.A. Khan said in a statement that, following a preliminary examination into the situation, there is a reasonable basis to "believe that both alleged war crimes and crimes against humanity have been committed in Ukraine."

Russia maintains that it isn't targeting civilian infrastructure in Ukraine, and that there is no evidence of civilian deaths caused by the Russia military. Russia's outgoing President of the UN Security Council Vassily Nebenzia repeated these claims on Monday, stating the "tide of dirty lies replicated in Western mass media unfortunately have become a dangerous mark of our time."

But there is a growing body of evidence to show that civilians are being targeted, and the UN said Monday that 406 civilian casualties in Ukraine have been reported.

Skaters will be banned from participating in ISU championships and other events, the ISU said in a statement.

The same rules will apply to “officials listed in the respective ISU Communications and/or regulations under Russia and Belarus," according to the statement.

The governing body said the suspension will come into immediate effect and will remain in place until further notice.

The ISU Council will continue to closely monitor the situation in Ukraine and its impact on the ISU activity and will take additional steps if and when required.”

At least six people were injured, including a child, in an explosion in Ukraine's second biggest city, Kharkiv, Ukraine's State Emergency Service said in a Telegram post Tuesday.

The blast destroyed a government building, according to videos of the incident posted by the Ukrainian Ministry of Foreign Affairs (MOFA) and Ukrainian government officials. The clips were posted on social media early Tuesday local time and have been verified by CNN.

“Russia is waging war in violation of international humanitarian law. Kills civilians, destroys civilian infrastructure. Russiaʼs main target is large cities that are now fired at by its missiles,” the Ukrainian MOFA tweeted Tuesday, sharing a video showing what appears to be a missile attack on the Kharkiv Regional State Administration building.

A separate video posted by Kostiantyn Nemichev, the Head of Defense Staff of Kharkiv, showed the aftermath of the purported strike, including the inside of the building which had been reduced to rubble.

The Regional State Administration building houses local government offices. It is located in "Freedom Square" — the main square of Kharkiv and an architectural landmark.

Anton Gerashchenko, adviser to Ukraine's Minister of Internal Affairs, also shared a video on his official Telegram account taken from street level at Freedom Square. The video shows the site of the explosion, and the debris on the ground where the Kharkiv Regional State Administration building once stood.

The Indian Embassy in Kyiv has asked its citizens to "urgently" leave the Ukrainian capital, as Russia's military convoy closes in on the city.

“All Indian nationals including students are advised to leave Kyiv urgently today. Preferably by available trains or through any other means available,” the embassy wrote on Twitter on Tuesday.

Less than 24 hours earlier, the embassy had advised Indian citizens to “remain calm, peaceful and united,” asking them to remain patient as large crowds were expected at railway stations.

Tuesday's announcement comes after reports of Indian students allegedly being harassed while trying to cross Ukraine's border into neighboring countries.

In response to a question about the alleged harassment, Arindam Bagchi, spokesperson for India's Ministry of External Affairs, said during a news conference Monday they continue to speak to the ambassadors of both Russia and Ukraine to ensure the safety of Indians.

India's announcement comes as a Russian military convoy made up of armored vehicles, tanks, towed artillery and other logistical vehicles reached the capital's outskirts Tuesday, according to satellite images from Maxar Technologies.