The Russian military appears to have taken central Kherson, screenshots posted to social media and a video obtained by CNN show.

The screenshots from a webcam and the video have been geolocated, and their authenticity verified by CNN.

Entering the city: On Tuesday, CNN reported that Russian military vehicles had been seen on the eastern side of the city after days of shelling and intense fighting.

The videos provide new evidence that the Russians are moving throughout Kherson, apparently unimpeded. It also shows that the Russian forces from Crimea have advanced and established a crossing across the Dnieper River.

"We are NOT military! But I will hold the city and its functioning as long as I can," he wrote. “If the Russian soldiers and their leadership hear me. I ask: leave our city, stop shelling the civilians. You have already taken everything you wanted. Including human lives.”

At least 136 people, including 13 children, have been killed in Ukraine since Thursday, February 24, the UN said Tuesday.

Another 400 civilians, including 26 children, have been injured, according to Liz Throssell, spokesperson for the UN High Commissioner for Human Rights.

"These are only the casualties we were able to cross-check, and the real toll is likely to be much higher," Throssell said.

She added that most of the casualties were caused by the use of explosive weapons with a wide impact area, including shelling from heavy artillery and multiple launch rocket systems, and airstrikes.

Ukraine's Interior Ministry reported higher figures on Sunday, saying 352 civilians had died and 1,684 had been injured since the Russian invasion.

Japan will temporarily close its embassy operations in the Ukrainian capital Kyiv on Wednesday and move its operations to a temporary liaison office in Lviv, the country’s foreign ministry spokesman said on Wednesday.

The spokesperson added that Japan would ensure the safety of about 120 Japanese residents in Ukraine and support their evacuation from the country at the temporary liaison office in Lviv.

The Japanese Embassy in Poland has also set up a temporary liaison office in the city of Rzeszow, on the other side of the Ukrainian border, to support Japanese nationals evacuating from Ukraine, the spokesman said.

Inside the underground bomb shelters of a Kyiv children’s hospital, the mood is somber and quiet.

“The parents do not smile. Neither do the children. But the parents try to make the best of the situation for their children by playing games, singing songs, playing cartoon videos on mobile phones,” photographer Timothy Fadek said. “When the sirens are heard, the parents gather their children and try to distract them from the outside noise.”

The hospital’s intensive-care unit has been moved to the shelters. Some children are on ventilators. Others require transfusions. A few require surgery. Many are receiving chemotherapy to fight cancer.

There has been recent shelling near the hospital at night, and doctors told Fadek they fear the worst is yet to come.

“Hospital staff is unsure if the hospital will remain off-limits as a target,” Fadek said. “So they try to place as many parents and their children in the bomb shelter as possible, especially when the sirens go off, usually five times a day or more.”

The US Department of Justice is launching a task force to investigate Russian oligarchs, President Biden announced during his first State of the Union address Tuesday evening.

“Tonight I say to the Russian oligarchs and corrupt leaders who have bilked billions of dollars off this violent regime: No more,” the President said, drawing a standing ovation from both Democrats and Republicans.

Biden said the US would join with European allies to “find and seize their yachts, their luxury apartments, your private jets.”

Speaking directly to oligarchs, he added, “we’re coming for your ill-begotten gains.”

Closing airspace: He also confirmed that the US will close off American airspace to all Russian flights to further isolate Russia, “adding an additional squeeze on their economy.”

“The ruble has lost 30% of its value,” Biden added. “The Russian stock market has lost 40% of its value and trading remains suspended. Russia’s economy is reeling and Putin alone is to blame.”

President Joe Biden expressed solidarity with Ukrainian people in his State of the Union address on Tuesday -- but reiterated that the US would not deploy troops to Ukraine.

“Let each of us here tonight in this Chamber, if you’re able to stand, stand and send an unmistakable signal to Ukraine and to the world," he said -- receiving a loud standing ovation from the members, many of whom wore blue and yellow in support of Ukraine. Ukraine's Ambassador to the United States, Oksana Markarova, stood beside first lady Jill Biden as the chamber applauded, holding her country’s flag.

“We, the United States of America, stand with the Ukrainian people,” Biden said.

“Let me be clear — our forces are not engaged and will not engage in the conflict with Russian forces in Ukraine," he told members of Congress gathered for his State of the Union address. American troops were deployed to Europe not to fight in Ukraine, “but to defend our NATO allies in the event that Putin decides to keep moving west," he said.

“For that purpose, we have mobilized American ground forces, air squadrons, ship deployments to protect NATO countries including Poland, Romania, Latvia, Lithuania, and Estonia,” he added.

NATO's Article 5: Previously, Biden has said the US would hold fast to NATO’s Article 5 principle, which says that an attack on one NATO country is an attack on all member counties.

In Tuesday’s remarks, he pledged, “As I’ve made crystal clear, the United States and our Allies will defend every inch of territory of NATO countries with the full force of our collective power.”

He added that the US and its allies were providing “more than $1 billion in direct assistance to Ukraine,” including military, economic, and humanitarian aide.

ExxonMobil pledged Tuesday to leave its last remaining oil-and-gas project in Russia, and not to invest in new developments in the oil-rich nation.

By moving to discontinue its Sakhalin-1 project in Russia, Exxon joins a growing list of Western companies including Apple, Ford and General Motors distancing themselves from Moscow. A series of major energy companies, including BP and Shell, have similarly moved to leave Russia.

“ExxonMobil supports the people of Ukraine as they seek to defend their freedom and determine their own future as a nation,” Exxon said in a statement. “We deplore Russia’s military action that violates the territorial integrity of Ukraine and endangers its people.”

The last project: The Sakhalin-1 project is described as one of the largest single international direct investments in Russia, according to the project’s website. Exxon Neftegas Limited, an Exxon subsidiary, has a 30% stake and serves as the operator. Russia’s Rosneft also owns a stake.

An Exxon spokesperson confirmed to CNN that this is the company’s last remaining Russian project. By quitting this project, Exxon would end more than a quarter-century of continuing business presence in Russia.

Exxon, the largest US oil company, was a glaring omission among the big brands cutting ties with Russia. The company operates the Sakhalin-1 project on behalf of a consortium that includes Russian, Japanese and Indian companies.

The company did not detail the financial toll of unwinding a project it has sunk considerable resources into over the years.

Exxon signaled this will not be done overnight, saying it has an obligation to ensure the safety of the people and environment as it quits the project.

“The process to discontinue operations will need to be carefully managed and closely coordinated with the co-venturers in order to ensure it is executed safely,” Exxon said.

“We have suspended major operations in Moscow and temporarily closed our office in Kyiv. We are also suspending parts, maintenance and technical support services for Russian airlines. As the conflict continues, our teams are focused on ensuring the safety of our teammates in the region,” said the spokesperson in a statement.

Some context: Many countries have closed their airspace to all Russian airlines and aircraft as the invasion of Ukraine continues, and a number of international airlines have suspended flights in and out of the country.

US President Joe Biden announced the US would ban Russian aircraft from US airspace at his State of the Union address tonight. 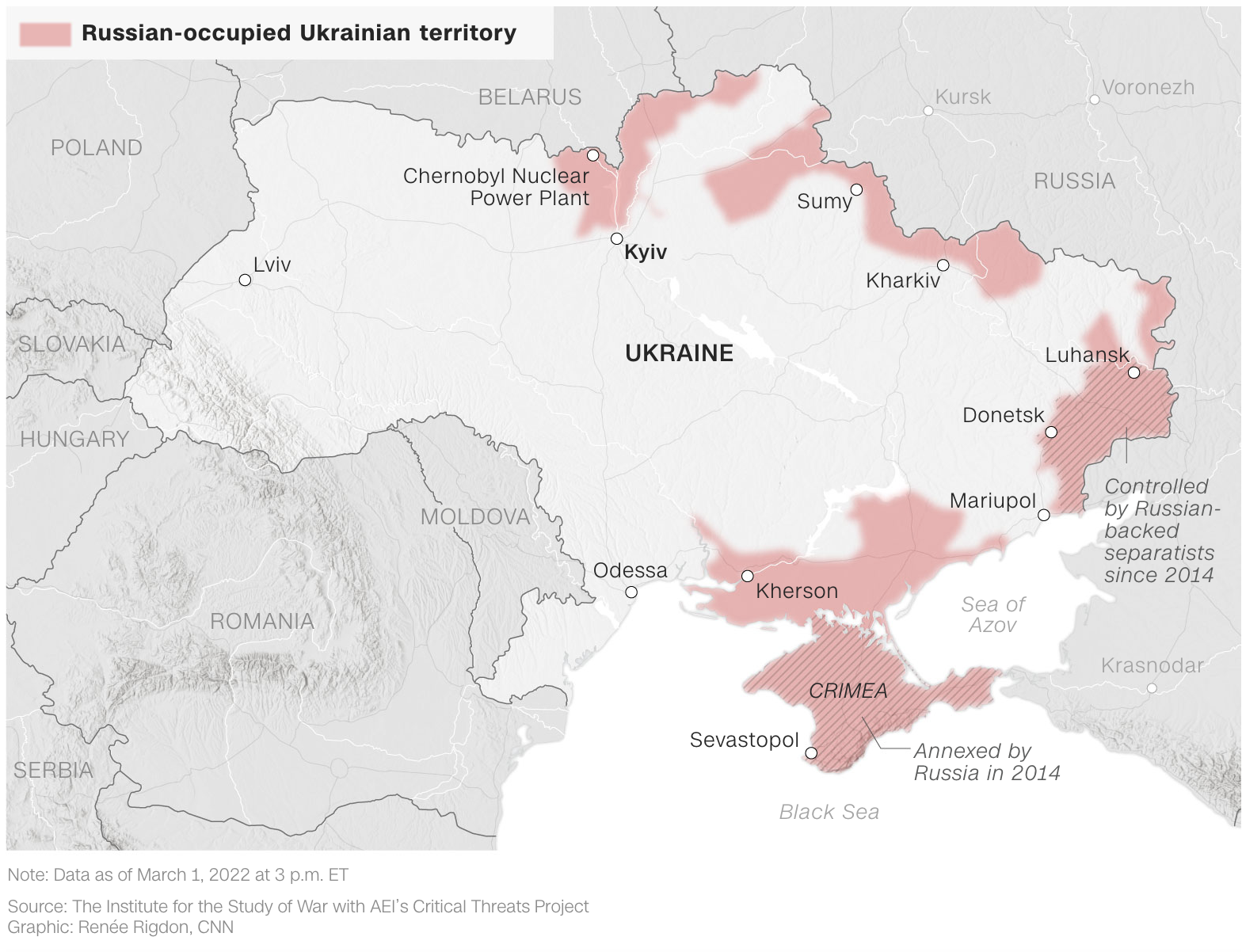 Almost a week into Russia's invasion of Ukraine, Moscow's forces have made major advances in border regions in the north, east and south of the country — but faced slower progress than expected toward the capital, Kyiv.

Russian forces attacked key cities from several sides on Tuesday, scaling up their bombardment of Kharkiv, Ukraine's second-largest city, in the northeast. They also broke through a heavily contested port city in the south, and have likely encircled several others.

Russia has also stepped up its attacks on Kyiv, with rockets hitting a Holocaust memorial site in the city on Tuesday. A missile also hit a private maternity ward near the city, though everybody had evacuated.

Meanwhile, a 40-mile long Russian convoy of tanks, armored vehicles and towed artillery is heading toward the Ukrainian capital, according to satellite images from Maxar Technologies.