When Rep. Victoria Spartz was elected to the House in 2020, she became the first Ukrainian-born member of Congress.

Little did she know that after just one year on the job, that distinction would take on even greater significance as Russia brutally invades her home country and the United States debates what to do about it.

As a freshman, the Indiana Republican is using her microphone in Congress to make passionate pleas for a stronger US response to the rapidly escalating crisis in Ukraine, and hoping her personal connection to the conflict will make the message resonate more strongly. All the while, Spartz is dealing with the emotional toll of watching the bloody invasion unfold, knowing she still has friends and family — including her grandmother —who are in Ukraine.

Spartz is calling for stiffer sanctions, immediate aid and more military resources, saying the Ukrainian people want more weapons — not troops — because they want to fight the Russians themselves. She also is advocating for refugees and drawing attention to the horrors of the humanitarian crisis that is quickly unfolding. 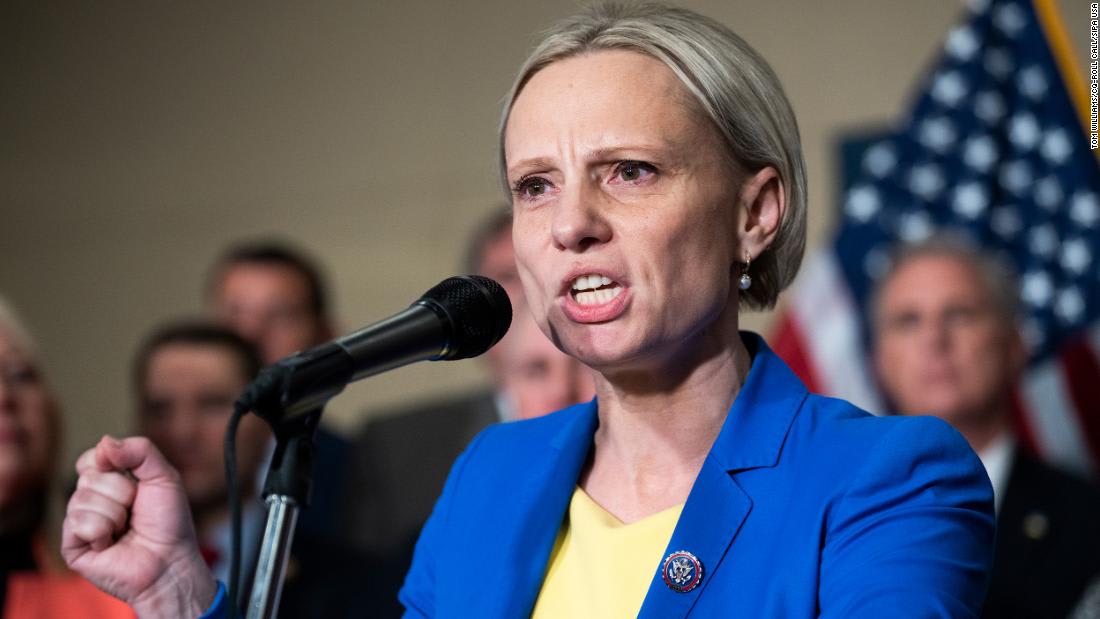 1st Ukrainian-born member of Congress pushes US to do more

The Fédération Internationale de l’Automobile (FIA), the governing body for many motorsport events including Formula One, said Tuesday it would not bar Russian and Belarusian drivers from competitions amid the invasion of Ukraine.

Drivers from both countries are allowed to continue racing — but under a neutral “FIA flag” and without displaying any Russian or Belarusian national symbols, colors or flags on their uniform, equipment and car, the FIA ruled at a World Motor Sport Council meeting.

“We stand in solidarity with Leonid Kostyuchenko, the President of the Federation Automobile d’Ukraine (FAU) and the wider FIA family in the country," said FIA president Mohammed Ben Sulayem. "We sincerely hope for a peaceful resolution to their intolerable hardship.”

A Russian military strike in the small Ukrainian town of Borodjanka on Tuesday tore through two apartment blocks, videos on social media show.

Borodjanka, located about 50 kilometers (30 miles) from the center of Kyiv, is the latest civilian area facing a hail of Russian munitions as President Vladimir Putin's forces advance on the capital.

CNN is unable to verify whether there were any injuries or fatalities in the military strike in Borodjanka. CNN has reached out to the Ukrainian Interior Ministry for comment but has not yet received a response.

The videos from Borodjanka have been geolocated, and their authenticity verified by CNN.

"Look what's happening," a man yells in a video taken moments after the military strike, with smoke still rising nearby and the bombed-out apartment complexes in view. "They are bombing everything."

Videos showed a restaurant on the first floor of the complex reduced to rubble. A number of people, bundled in heavy coats, are shown running away. Additional videos show the extent of the destruction, with the ground behind the complex littered with burning cars.

Parts of the apartment buildings have collapsed, with significant portions missing from the facades. A playground nearby is on fire, with the swinging benches and slides strewn with rubble and splintered trees.

"A plane flew by twice dropping three or four bombs here," another man says in the one of the videos. "Cries can be heard (from inside the rubble). We are trying to find out if anyone's still alive (in there), based on their sounds. Good Lord!"

Back in front, near the destroyed walls of the restaurant, another video shows the roadway littered with debris and the twisted metal frame of a vehicle.

"The Russian world has come to us," a man says in the video. "Just take a look at what they've done."

President Joe Biden will announce during the State of the Union tonight that the United States will ban Russian aircraft from US airspace, two sources familiar with the decision tell CNN.

The US would join a growing number of countries who are closing their skies to Russia following the invasion into Ukraine.

When asked if they were considering this move in recent days, press secretary Jen Psaki told reporters that the number of US flights that fly over Russia to go to Asia and other parts of the world played a role in the decision.

A Ukrainian diplomat in Brazil has criticized Brazilian President Jair Bolsonaro’s "neutral" stance on Russia's invasion of Ukraine, arguing the concept of neutrality can't be applied in a conflict where it's clear who the aggressor is.

On Sunday, Bolsonaro refused to sanction Moscow and insisted Brazil would "adopt a neutral stance" on the invasion, pointing to his country's reliance on Russian fertilizer for its agriculture.

Afterward, Brazil’s Minister of Foreign Affairs Carlos França clarified that Bolsonaro had meant to use the word "impartiality."

Speaking during a news conference at Ukraine's Embassy in Brasilia Tuesday, Ukrainian diplomat Anatoliy Tkach said Kyiv had not received any word of solidarity from Bolsonaro.

"We know who the aggressor is. There are victims. I don't understand how impartiality can apply in this situation," he said.

Tkach also warned that maintaining ties with Russia at this time could lead to indirect financing of the war against Ukraine.

“We call on everyone to cut all trade ties with Russia. All ties. Doing business with Russia now means funding aggression, war crimes, disinformation, cyber attacks and even Russian leader Vladimir Putin,” he said.

White House Chief of Staff Ron Klain declined to say Tuesday if US President Joe Biden will announce any “concrete military steps” against Russia at tonight’s State of the Union addressing, telling CNN’s Wolf Blitzer in an interview Biden will highlight, “what he has assembled, which is an unprecedented coalition — NATO plus our EU partners, UK, Canada, Australia, Japan — to do two things: to provide all kinds of aid…and also coming together with unprecedented sanctions against the country as large as Russia.”

“So, what you’ll hear the President tonight talk about is this coalition he's helped assemble, he's led in assembling,” Klain told Wolf, “Along with the next steps further tightening the sanctions on the oligarchs who buck up Putin, who benefit from Putin's regime, and also the next steps in getting humanitarian and military aid to the Ukrainians.”

Klain also declined to weigh in on Putin’s mental state, only telling CNN Putin “has done something now that he has not done to this extent before, which is launch a completely unprovoked unjustified invasion of a country as large and as significant as Ukraine.”

Earlier Tuesday, CNN reported the US intelligence community has made evaluating Russian President Vladimir Putin's state of mind a top priority in recent days as it seeks to establish how that is affecting his handling of the rapidly escalating Ukraine crisis, according to two sources familiar with the effort.

Klain pointed to the sanctions in effect already following Russia’s invasion of Ukraine, indicating that the actions have already garnered Biden praise from allies and political opponents alike,

“It’s hard to impose sanctions like that on a country as big as Russia, it's hard to pull everyone together to do that, and I think that's why you're seeing both Democrats and Republicans, including people who have not been big fans of Joe Biden previously, saying that this effort, this global effort to punish Putin and punish his regime is tighter and stronger than they ever expected,” he said.

The United States has begun the process of expelling a 13th Russian “intelligence operative” for allegedly abusing “their privileges of residence” in the US, according to a US official.

The individual is a United Nations staff member, the official said. On Monday, Deputy US Ambassador Richard Mills confirmed that they had asked 12 Russian UN diplomats to leave the country due to their alleged engagement in “activities that were not in accordance with their responsibilities and obligations as diplomats.”

“I can confirm that the United States Mission informed the Secretariat on 28 February 2022 of its decision to take action under Section 13(b) of the UN-US Headquarters Agreement with respect to a staff member of the Secretariat. We regret that we find ourselves in this situation but are engaging with the host country in line with Section 13(b). In deference to the privacy of the individual concerned and the sensitivity of the matter we will not comment further,” Dujarric said.

More context: Section 13(b) of the UN-US Headquarters Agreement states that if a diplomat or UN staffer abuses their residence privileges outside of their official capacity, they will not be exempt from United States laws and regulations regarding their continued residence.

CNN has also reached out to the US State Department for more information.

"A missile hit the maternity clinic. Much damage was done but the building is standing. Everyone has been evacuated," Gyrin wrote on his Facebook page.

Gyrin also specifically asked people not to come to the clinic, "Most important is do not come now to get anyone from here. Everyone is in a secure place and in safety. This is for sure."

Gyrin also posted photos on his Facebook page that show the damaged building of the Adonis clinic.

"The French satellite which broadcasts Russia Today (RT) in both the EU and UK will be switched off. This means RT will no longer be available via Sky," Dorries tweeted.

"Putin’s polluting propaganda machine will now have severely restricted access into British homes via our TV screens," she added.