Hundreds of workers and local people have blocked an access road to a Ukrainian nuclear power plant near the southeastern town of Enerhodar, as Russian forces advance in the area.

Garbage trucks were also being used to block the thoroughfare.

Dmytro Orlov, mayor of Enerhodar, said on his Facebook page: “We conveyed the position of our city and its residents that the ZNPP [Zaporizhzhia Nuclear Power Plant] is under reliable protection, that its workers and residents of Enerhodar are under Ukrainian flags.”

“All municipal services are working in emergency mode. Nobody is going to surrender the city. People are determined,” Orlov added.

Kremlin spokesman Dmitry Peskov said a Russian delegation will be "in place" Wednesday for new round of talks with Ukraine, but gave no additional details about the location or format of the discussions.

Peskov declined to give the location of possible talks. On Monday, talks took place been Ukrainian and Russian delegations in Belarus, not far from the Ukrainian border. The two sides discussed a potential ceasefire, according to a Ukrainian presidential adviser, but did not yield any concrete result.

The Kremlin spokesperson said he could not predict whether a Ukrainian delegation would show, adding, "we hope it happens." 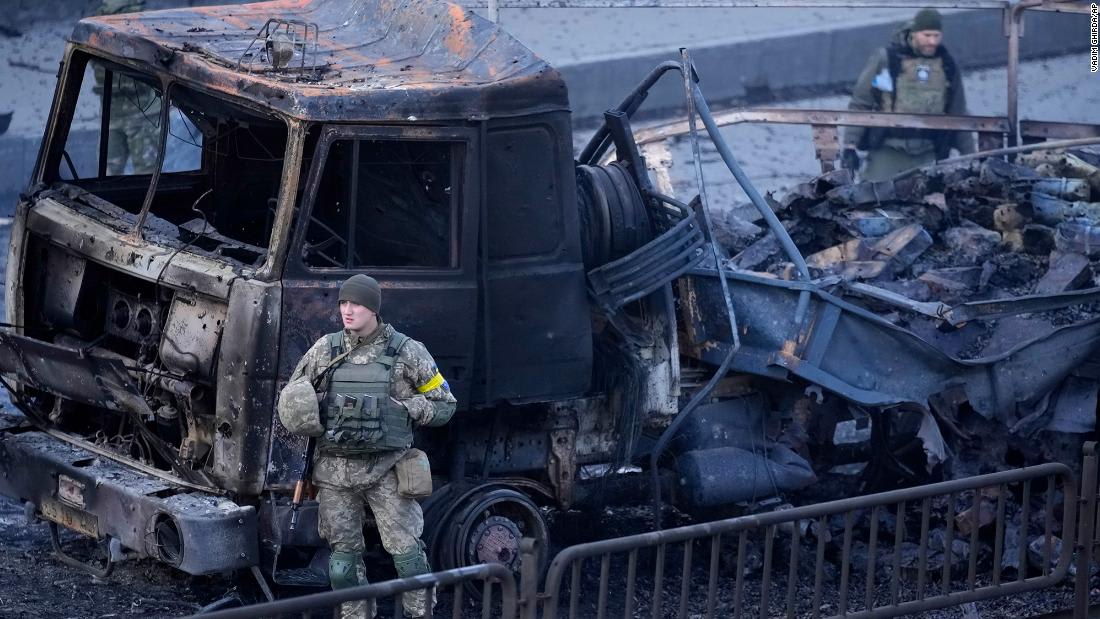 Kyiv Mayor Vitali Klitschko told CNN that while he has traveled the globe representing his country as a Hall of Fame boxer, right now he is "very proud to be Ukrainian."

"We stayed in front of one of the strongest armies in the world," the former world heavyweight boxing champion said. "The will to be independent is (the) main priority for us. And we're defend(ing) our families, our city, our country and our future."

Klitschko also called for countries to support Ukraine, because it will be "difficult to survive" without it.

Klitschko said infrastructure -- electricity, heating and water -- are up and running in Kyiv. He said authorities are in direct communications with the Red Cross and other humanitarian organizations, who have sent food and support that is en route to the Ukrainian capital.

We have to keep united," he said. "The war is not just for Ukraine. It's (a) challenge for the whole modern world, for (the) whole democratic world."

The mayor said that Ukrainians will fight for "every square" and "every street" of Kyiv should Russian forces advance on the city.

We expect a huge fight," Klitschko said. "But we're fighting for our families."

"There is a huge patriotic movement right now. Old people -- can you imagine -- doctors, actors, actors from theater, many professions that never had expectation to fight, to keep weapons, but right now they (are) coming to us," Klitschko said. "They're ready to fight. It's amazing."

Fierce fighting is continuing around Mariupol, as Russian and Russian-backed separatist forces have surrounded the southern Ukrainian city of about 400,000 people on three sides.

Residents reported heavy shelling overnight, but Mariupol Mayor Vadym Boychenko said Ukrainian authorities were able to restore some mobile communications despite working as the city was being shelled and shot at.

"Today there are 128 people in our hospitals. Our doctors don't even go home anymore. They are fighting for the lives of Mariupol residents," he said.

Russian forces are hoping to take Mariupol to complete a land corridor that would link the Crimea with southern Russia. Russia illegally annexed Crimea in 2014 from Ukraine.

The Ukrainian flag has been brought down at the country’s embassy in Moscow, Russian state news agency RIA reported Wednesday.

According to RIA, a sign indicating the building was home to the Ukrainian embassy was also removed and the doors sealed.

The Ukrainian government severed diplomatic ties with Russia on February 24, after Moscow ordered an invasion of the country.

India is setting up an embassy in the Ukrainian city Lviv after evacuating all its citizens from the capital Kyiv, India’s foreign secretary Harsh Shringla told reporters late Tuesday.

He did not say if the embassy in Kyiv would be shut.

"The Embassy office in Ukraine is being set up in Lviv, which will enable our Embassy teams to spread out to the border areas of Ukraine with Poland, Slovakia, Hungary and Romania,” Shringla said, adding that the proximity to the western border would allow the embassy to facilitate the evacuation of citizens from Ukraine into ​neighboring countries.

The Ministry of External Affairs declined to confirm to CNN if the Kyiv embassy had been shut.

Earlier this week, the Indian embassy in Kyiv had issued advisories for all Indian citizens to leave the capital.

“All of our nationals have left Kiev,” Shringla said Tuesday.

So far, 12,000 of the 20,000 Indian citizens that were in Ukraine have left the country. Half of those remaining, around 4,000, are in conflict zones in the Kharkiv-Sumy region of Ukraine, while the rest are “out of harm’s way,” Shringla added.

The Ukrainian Ministry of Defense has denied reports that the southern city of Kherson has fallen to the Russians.

“According to the info from our brigade the battles are going on now,” a spokesperson for the ministry said. “The city is not captured totally, some parts are under our control.”

Russian state media had previously reported that Russian troops had taken full control of the city.

Kharkiv's regional police department and Kharkiv National University have been targeted in a military strike Wednesday morning, according to Ukraine’s State Emergency Service and footage geolocated by CNN.

The videos show the buildings engulfed by fire and emergency personnel attending the scene. Three people were injured, according to a statement from the state's emergency service.

Ukrainian intelligence agency facilities were among the targets struck, according to Russian state news agency TASS.

On Tuesday, the area surrounding a TV tower in the Ukrainian capital of Kyiv was hit by military strikes, videos and photos posted to social media, geolocated and verified by CNN, showed. The Ukrainian Ministry of Internal Affairs also confirmed there was a military strike near the TV tower.

It was not immediately clear if the area around the tower was among the targets mentioned by the Russian Ministry of Defense.