"We have seen the use of cluster bombs and we have seen reports of use of other types of weapons which would be in violation of international law," Stoltenberg told reporters in Brussels on Friday.

Stoltenberg added that NATO and its allies were “collecting information and monitoring very closely what is going on in Ukraine.”

“I also welcome the decision by the International Criminal Court to open the investigation to this because we have to make sure that President Putin, the president of Belarus are held accountable for what they do," he said.

"This is brutality. This is inhumane. This is violating international law,” Stoltenberg said.

Cluster bombs — which not only deliver an initial explosion on impact but also contain multiple smaller bombs that spread over a wide area — are largely condemned by the international community due to the risk of civilian casualties when they're used in populated areas.

US President Joe Biden’s envoy to the United Nations has accused Russia of preparing to use banned weapons, including "cluster munitions and vacuum bombs," in Ukraine. And she issued a stark warning to invading Russian soldiers.

"Your leaders are lying to you. Do not commit war crimes," US Ambassador to the UN Linda Thomas-Greenfield said during remarks to an emergency session of the General Assembly on Wednesday.

You can read more about cluster bombs and the International Criminal Court's investigation into possible war crimes here.

Following the attack on a nuclear plant in Ukraine by Russian troops, the United Nations Security Council will hold an emergency meeting at 11:30 a.m. ET Friday in New York, according to three UN diplomats.

Russian troops have occupied the Zaporizhzhia nuclear power plant — the largest in Europe — where a fire that had threatened potential disaster was extinguished in the early hours of Friday morning, according to Ukraine's nuclear regulator.

It will be an open meeting with speeches including from an International Atomic Energy Agency official and a UN official.

British Prime Minister Boris Johnson and the UK foreign secretary had said they wanted to have an emergency meeting following the attack.

NATO’s chief said Friday that a no-fly zone over Ukraine is not an option being considered by the alliance.

“We’ve agreed that we should not have NATO planes operating over Ukrainian airspace or NATO troops on Ukrainian territory,” Secretary General Jens Stoltenberg said at a news conference in Brussels.

He warned that the days to come in Ukraine “are likely to be worse” with “more deaths, more suffering and more destruction,” and appealed for dialogue.

NATO is not seeking a war with Russia, Stoltenberg emphasized.

“Ministers agreed that NATO's relationship with Russia has fundamentally changed for the long term. But we remain committed to keeping channels for diplomacy and deconfliction open to avoid any fundamental escalation, misunderstanding or miscalculation,” he said.

This week, NATO deployed the NATO Response Force for the first time and has “130 jets at high alert and over 200 ships from the high north to the Mediterranean” to reinforce NATO’s defensive posture in the eastern part of the alliance. Stoltenberg pledged that the alliance will “continue to do what it takes to protect and defend every inch of NATO territory.”

“President Putin has failed to divide us. NATO's more united more determined and stronger than ever,” Stoltenberg said.

More background: Ukrainian President Volodymyr Zelensky has been calling for NATO and Western allies to enforce a no-fly zone over Ukraine amid Russia’s ongoing invasion and aerial bombardment of its cities.

European Council President Charles Michel said on Thursday that enforcing a no-fly zone over Ukraine is a NATO decision, but that it would be “one step too far” with a “real risk of escalation and a real risk of a possible third international war.”

The United States has said that it will not put US troops in the air to create a no-fly zone in Ukraine, according to the US ambassador to the United Nations.

Google has suspended all advertising in Russia, the company confirmed to CNN Friday.

"In light of the extraordinary circumstances, we’re pausing Google ads in Russia," the company said in a statement. "The situation is evolving quickly, and we will continue to share updates when appropriate."

The decision covers all Google's ad surfaces in Russia, including Google display advertising, YouTube and search, the company said.

The move follows a similar decision by Twitter last week to suspend advertising in both Russia and Ukraine.

It is unclear whether Meta, Facebook's parent, also intends to suspend advertising in Russia. The company didn't immediately respond to a request for comment.

Google and Meta had both already taken steps to prevent Russian state media from running ads on their respective platforms.

“We have reports – credible reports, verified reports – and we are acting with the authorities on both sides,” Vitorino said.

“We have already approached the authorities both in Ukraine and the neighboring countries to make sure everybody who is fleeing the country, irrespective of their nationality, of their territory of origin, of the color of their skin, is allowed to cross,” he added.

Speaking during an interview with CNN’s Isa Soares, Vitorino stressed that all those seeking to flee the conflict “need to be treated on equal footing.”

“In spite of the war, there is a responsibility of the authorities to guarantee the safety and security of all human beings. The missiles do not discriminate according to nationality, they hit everybody equally,” he said.

In a report published Friday, Human Rights Watch said dozens of foreign nationals interviewed by the organization — many of them students — had “revealed a pattern of blocking or delaying foreigners from boarding buses and trains.”

“Foreigners living in Ukraine have faced unequal treatment and delays as they attempt to flee the war alongside hundreds of thousands of Ukrainians,” Human Rights Watch said.

Foreign students attempting to leave the country have told CNN that they are experiencing racist treatment by Ukrainian security forces and border officials.

On Wednesday, Ukrainian Foreign Minister Dmytro Kuleba announced that the government has established an emergency hotline for foreign students wishing to leave Ukraine.

“We are working intensively to ensure their safety and speed up their passage,” Kuleba tweeted, adding that those attempting to cross the border “need to have equal opportunities to return to their home countries safely.”

Kremlin spokesman Dmitry Peskov said Friday that there is "no talk" of Russia and Ukraine signing any formal documents after Thursday's second round of talks between the two sides.

"The second round of negotiations took place yesterday," Peskov said in a conference call with reporters. "Now it is up to these negotiations. It is an opportunity for the delegations to convey to each other all the elements of positions without unnecessary intermediaries. Elements of our position have been brought to the attention of the Ukrainian side."

Asked about the possibility of the two sides signing any high-level agreements, Peskov said, "There is no talk of (signing) any documents yet. The talks that took place were a good opportunity to clearly convey our vision of this problem."

More than 18,000 people have arrived in Germany from Ukraine since the Russian invasion just eight days ago, according to the German interior ministry.

"Up until now 18,436 refugees from Ukraine have arrived in Germany,” Maximilian Kall, interior ministry spokesperson told reporters at a press briefing in Berlin.

''According to Germany's Federal Police, most of them (refugees) are families without men -- and a large number of them are women and children.”

He clarified that ''people who are fleeing the war zone can enter the EU -- regardless of whether they are Ukrainian asylum seekers or third-country nationals.”

Most of the non-Ukrainian refugees had permanent residence in Ukraine, which means they do not have to go through an asylum procedure.

So far more than one million refugees have been forced to flee Ukraine in just seven days, according to the United Nations. 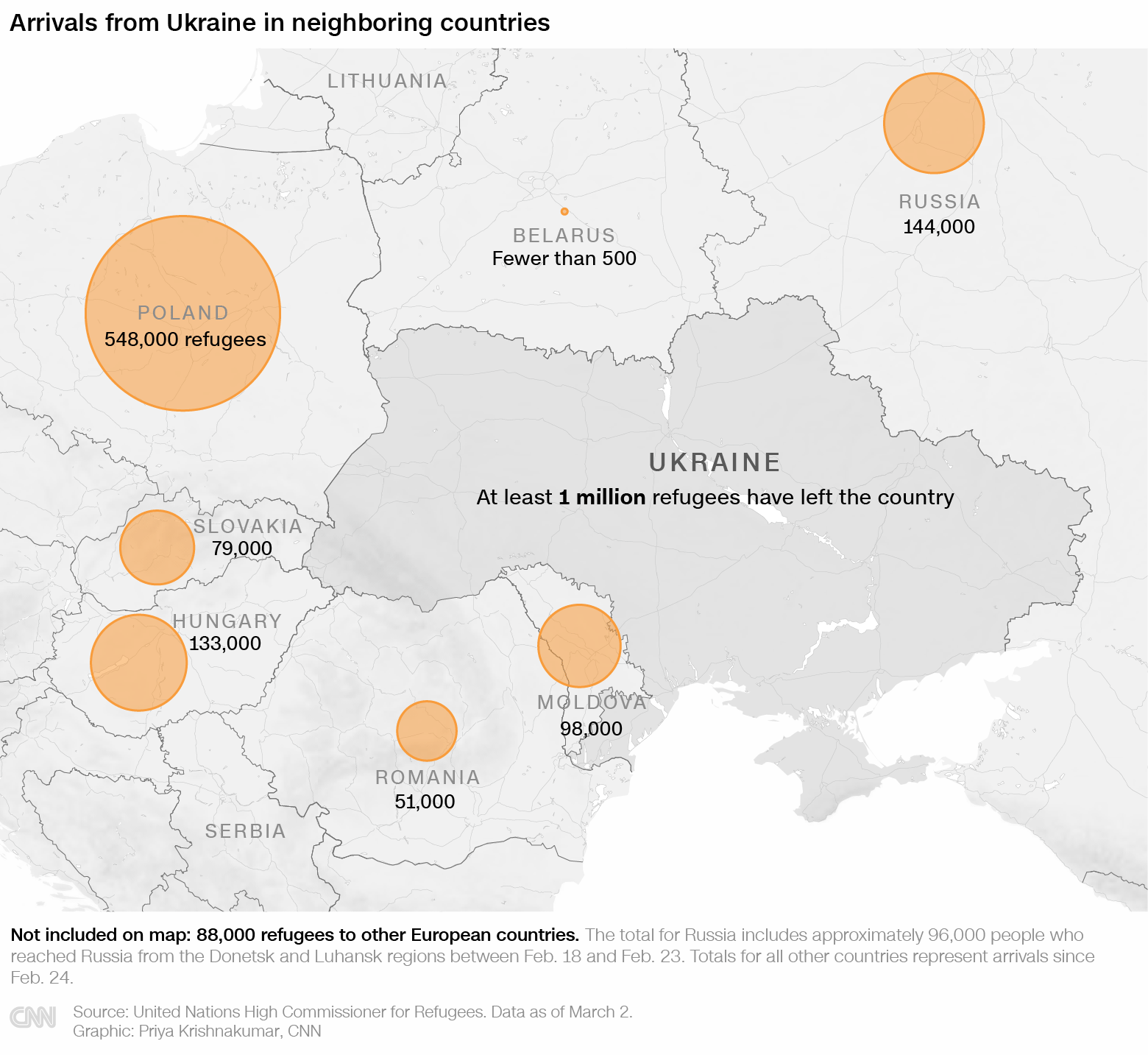 Filippo Grandi, the UN High Commissioner for Refugees, said in a statement Thursday: "I have worked in refugee emergencies for almost 40 years, and rarely have I seen an exodus as rapid as this one."

Half a million of the refugees are children, according to UNICEF, which warned Europe could be facing its largest refugee crisis since World War II.

The United Nations Human Rights Council has voted to set up an independent commission of inquiry as a result of Russia's invasion of Ukraine.

"The Human Rights Council has decided to urgently establish an independent international commission of inquiry as a result of #Russia's aggression against #Ukraine," the council said in a Twitter post Friday.

"UN members from all regions around the world joined together at the council to condemn Russia's aggression against Ukraine in the strongest possible terms," the Permanent Representative of Ukraine to the UN, Yevheniia Filipenko, said following the vote.

"The message to Putin has been clear. You're isolated on a global level and the whole world is against you.”

There were 32 countries that voted in favor of the decision.

Independent Russian news outlet TV Rain ended its final broadcast with the words "no to war" on Thursday.

The station was forced to shut down because of the Russian government’s crackdown on local media over unfavorable coverage of the war in Ukraine.

TV Rain had already been forced off television airwaves but continued operating a YouTube broadcast. Its staff signed off, saying “no to war,” before walking off the station’s set.

The network then broadcast Tchaikovsky's ballet Swan Lake, a nod to the 1991 coup attempt against the government of then-Soviet leader Mikhail Gorbachev. As that coup was taking place, the ballet played repeatedly on television, an indication to viewers that something was wrong.