Singapore announced a list of sanctions aimed at Russia on Saturday, including export control of strategic items and financial measures.

“We will impose export controls on items that can be directly used as weapons to inflict harm on or to subjugate the Ukrainians, as well as items that can contribute to offensive cyber operations,” said the country's foreign ministry in a statement.

The medical team is not entirely sure what to expect as the train creaks to a stop in the darkness near the Ukraine-Polish border, just inside Ukraine. A bus' headlights inch forward. Eugenia Szuszkiewicz can feel the anxiety balling up in her stomach.

The doctor's stress levels are through the roof. This is a dangerous journey for children who need palliative care in the best of circumstances. Now 12 of them are doing it in a war.

Small and frail bodies are hoisted up for the last time in weary mothers' arms as they descend from the bus. Some are gently handed over to waiting doctors and nurses. For others, their health is too delicate and requires extra help to safely transport them on to the train, which will take them to Poland.

The medical staff hope to prevent any of the children from experiencing even more pain — emotionally or physically. One of the child's health is in such bad condition that doctors tell us that he may not survive the journey.

Kharkiv under siege: Eleven of the 12 came from hospices around Kharkiv, Ukraine's second-largest city, once known for having the best palliative care in the country. Now it's one of the country's most bombed areas, with Russian forces targeting residential areas there over the last week, hitting civilian infrastructure such as schools, shops, hospitals, apartment blocks and churches.

For days, Szuszkiewicz — a pediatrician and palliative care specialist — fielded phone calls from desperate parents of children stuck the Kharkiv area. The parents' plea for help came as bombs fell around them. One mother screamed that without a ventilator and pain killers, her child would die.

"I could only tell her if she found a way to Lviv (in western Ukraine) then I would be able to help her," Szuszkiewicz tells us, tears streaming down her face and her voice catching.

She still doesn't know if the mother and child are alive. 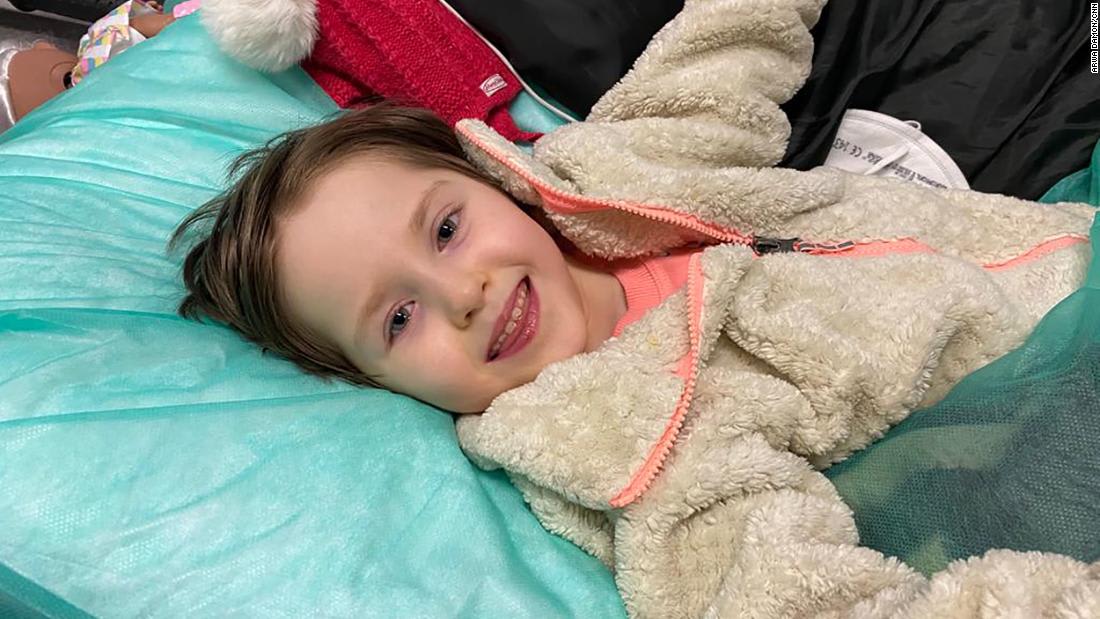 As of Thursday, more than 1.2 million refugees have left Ukraine since the Russian invasion began on February 24, according to the United Nations High Commissioner for Refugees.

Others went to other neighboring countries including Hungary, Slovakia, Moldova and Romania.

More than a million left within just the first week, and many more are “on the move both inside and outside the country,” with many internally displaced families, according to UNHCR.

Russia is poised to deploy up to 1,000 more mercenaries to Ukraine in the coming days and weeks, as a senior Western intelligence official warned Moscow could "bombard cities into submission," an escalation that could lead to significant civilian casualties.

The US has already seen "some indications" that Russian mercenaries may be involved in Moscow's invasion of Ukraine "in some places," a senior defense official said earlier this week, but it wasn't clear exactly where or in what numbers.

"We've seen some indications that they're being employed," the official said.

Now, a US official tells CNN that Russia is planning to deploy up to 1,000 more mercenaries in the near future.

Stalled forces: Some Russian forces have struggled with morale issues and setbacks on the battlefield, including a massive convoy north of Kyiv that has remained largely stalled for the past several days.

The mercenary forces would fortify the flagging units, the official said, as Russia's invasion of Ukraine enters its second weekend.

The official added that the US believes the mercenaries already in Ukraine have "performed poorly when facing the stiffer-than-expected resistance from the Ukrainians," and that as many as 200 such mercenaries have already been killed in the war as of late February.

Meanwhile, US and Western officials expect Russia to increase the pace and strength of its strikes on key Ukrainian population centers, including the capital Kyiv.

An intensifying assault: Russia now seems prepared to “bombard cities into submission,” one senior western intelligence official said on Friday, which could include a significant increase in the number of civilian casualties.

“It’s a very crude approach,” the official said. “The heavier weapons are not just heavier in the weight, they’re also heavier in terms of the damage that they can inflict. And they’re far less discriminant.”

Other officials have noticed a shift in Russian strategy from military targets to civilians, with more attacks becoming focused on population centers.

"The days to come are likely to be worse, with more death, more suffering, and more destruction, as the Russian armed forces bring in heavier weaponry and continue their attacks across the country," NATO Secretary General Jens Stoltenberg said on Friday.

US Secretary of State Antony Blinken echoed the sentiment during a press conference in Brussels Friday where he is meeting with European allies.

“The Kremlin’s attacks are inflicting an ever-increasing toll on civilians there. Hundreds if not thousands of Ukrainians have been killed, many more wounded, as have citizens of other countries. More than a million refugees have fled Ukraine to neighboring countries. Millions of people across Ukraine are trapped in increasingly dire conditions as Russia destroys more critical infrastructure,” Blinken said.

The British leader reminded Bolsonaro that Brazil was a “vital” ally during the second World War, and that Bolsonaro’s voice was “crucial” in this moment of crisis, CNN Brasil reported.

A spokesperson for Johnson said both leaders agreed on "demanding an urgent ceasefire" and agreed that "peace must prevail."

According to a statement from Johnson's spokesperson, the prime minister added that "innocent civilians are being killed and cities destroyed, and the world cannot allow President Putin’s aggression to be successful.”

CNN reached out to Brazil's government for comment and has not received a response.

Some context: Bolsonaro has so far avoided condemning or sanctioning Russia, saying Brazil was taking a "neutral" stance.

He argued sanctions would impact the Brazilian economy as well, pointing out that the country's agriculture depended on Russian fertilizers.

During a weekly livestream on social media Thursday, Bolsonaro said, “Brazil remains in a balanced position and we don’t have the capacity to solve this issue."

At the Opening Ceremony of the Paralympic Games in Beijing on Friday, International Paralympic Committee (IPC) president Andrew Parsons called for peace in his speech -- but a large part of his message was censored by Chinese state broadcaster CCTV.

“Tonight, I want to begin with a message of peace. As the leader of an organization with inclusion at its core, where diversity is celebrated and differences embraced, I am horrified at what is taking place in the world right now,” Parsons said, likely in reference to Russia’s invasion of Ukraine.

“The 21st century is a time for dialogue and diplomacy, not war and hate,” he added.

CCTV’s live commentary didn’t translate his description of the events taking place in the world, and most of the speech that followed. It also lowered the volume of Parsons’ speech on the broadcast and paused the sign language interpreters on screen.

During the Opening Ceremony, Parsons was seen clapping as the 20 athletes competing for Ukraine were introduced. But the scene of Parsons cheering for the Ukraine delegation was also censored, replaced with a wide shot of the stadium by the state broadcaster.

Some context: Earlier this week, the IPC banned Russian and Belarussian athletes from competing at the Beijing Paralympic Winter Games due to Russia’s invasion of Ukraine.

China has repeatedly refused to call Russia’s unprovoked military attack on Ukraine an “invasion,” instead calling for diplomacy and blaming the United States and NATO for "fueling fire" in the tensions.

This week, a Western intelligence report indicated that Chinese officials in early February requested that senior Russian officials wait until after the Beijing Olympics had finished before beginning an invasion into Ukraine. China responded that the report was “speculations without any basis, and are intended to blame-shift and smear China."

Applicants have to obtain a 180-day temporary visa within 90 days of arrival, which will then be eligible for extension to a temporary residence visa for up to two years, after which applicants can apply for permanent residency.

Applicants have until August 31 to apply for the visas, the order states.

Brazil's "neutral" position: Since the start of the war in Ukraine, Bolsonaro has avoided condemning or sanctioning Russia, saying Brazil was taking a "neutral" stance.

He argued sanctions would impact the Brazilian economy as well, pointing out that the country's agriculture depended on Russian fertilizers.

During a weekly livestream on social media Thursday, Bolsonaro said, “Brazil remains in a balanced position and we don’t have the capacity to solve this issue."

The International Gymnastics Federation (FIG) has announced that starting Monday, Russian and Belarusian athletes and officials, including judges, are not allowed to take part in FIG competitions or FIG-sanctioned competitions.

The decision means that those athletes and officials from those two federations are barred from competing in the Acrobatic Gymnastics World Championships in Baku, Azerbaijan from March 10-13.

On Saturday, FIG had announced that Russian and Belarusian national flags would not be displayed, and the two countries' anthems will not be played at any FIG-sanctioned event.

“The FIG would like to stress that these exceptional and emergency measures are decided and issued in view of the above-mentioned extraordinary circumstances,” FIG said in a statement on the organization's website.

“They constitute preventive measures aiming at preserving the integrity of Gymnastics, the safety and integrity of members and all athletes and participants, and at fighting against all forms of violence and of sports injustice," the statement continued.

“Russian and Belarusian nationals who are members of the FIG Executive Committee or of FIG technical committees are not affected by this measure when acting in their capacity as FIG Authorities," the statement said.

“The EC will continue to monitor the situation closely and may further adapt these exceptional measures according to future developments,” FIG added.

You can read the FIG statement in its entirety here.

The United States flew B-52 Stratofortress bombers over NATO’s eastern flank on Friday, exercising with the German and Romanian militaries in a sign of unity as the Russian invasion of Ukraine enters its second weekend.

The largest strategic bombers in the US Air Force took off from RAF Fairford, a Royal Air Force station in England, and conducted close air support and integration mission training, according to a statement from US Air Forces in Europe.

The B-52s then flew to Romania, where they conducted more close air support training as part of the bomber task force (BTF) missions.

The flight over Romanian airspace put the bombers right on the edge of NATO countries, adjacent to Ukrainian air space, where the Russian air force is trying to establish air supremacy.

“BTF rotations give us a critical opportunity to integrate and train with our allies and partners, especially during this difficult time,” said Gen. Jeff Harrigian, commander of United States Air Forces in Europe, Air Forces Africa, and NATO’s Allied Air Command.

“Training together ensures the defensive power of NATO remains unmatched,” he said.