At least 4,640 people were detained during protests in Russia on Sunday, OVD-Info, an independent monitoring group that tracks detentions in Russia, reports.

People have been detained in 147 cities, according to OVD-Info. Since the invasion, more than 13,000 people have been arrested in Russia in anti-war demonstrations, OVD-Info calculates.

“The units of the Ministry of Internal Affairs of Russia, in cooperation with other law enforcement agencies, ensured law and order in places where unauthorized public events were held in a number of constituent entities of the Russian Federation," Irina Volk, the official representative of the Russian Interior Ministry said, TASS reported.

Some of the cities where arrests were made included Moscow and St. Petersburg.

The detainees were “taken to the territorial police departments for investigation,” Volk said, adding "the issue of bringing them to justice is being decided.”

The Polish Border Patrol said that nearly one million people have been cleared to cross over the Polish border from Ukraine since Russia’s invasion of Ukraine began last month.

In a tweet on Sunday, the Polish Border Guards confirmed that “already 964 thousand people fleeing from Ukraine to Poland have been cleared at border crossings.”

A record number of over 129,000 refugees had crossed the Polish-Ukrainian border on Saturday alone, according to the Polish Permanent representation to the European Union.

The first emergency medical supply shipment from Médecins Sans Frontières (MSF)/Doctors Without Borders has arrived in Kyiv, the international humanitarian organization said in a statement.

The supplies include surgical kits, trauma kits, medications for chronic diseases and mass casualty supplies. They will be donated to local hospitals in the city and in other towns further east in Ukraine.

“It was urgent to do this fast,” said Christopher Stokes, MSF Emergency Coordinator in Ukraine, according to the statement.

“We may be in a race against time here — we have no certainty how long train access to Kyiv will remain possible. We chose to go with the train option for reasons of speed and the high volume capacity,” he added.

“The leaders discussed the urgent needs of the Ukrainian Armed Forces and the Prime Minister undertook to work with partners to provide further defensive equipment,” according to a Downing Street spokesperson.

Zelensky and Johnson also discussed the “deteriorating humanitarian situation” in the country.

Johnson “outlined what the UK is doing, both to provide humanitarian support and impose economic costs on Russia which strike at the heart of Putin’s war machine. This includes calling on other countries to take further action to remove Russia from SWIFT,” the spokesperson said.

The two leaders agreed to continue speaking, the spokesperson said.

French President Emmanuel Macron has voiced his “grave concern” about nuclear safety during a call with Russian President Vladimir Putin on Sunday.

A readout from the French Presidential Palace says Macron told Putin it was imperative concrete steps should be taken to address nuclear safety, security and safeguards.

“He (Macron) stressed the absolute necessity to avoid any damage to the integrity of Ukrainian civilian nuclear facilities, whose safety and security must be guaranteed in accordance with the rules of the International Atomic Energy Agency and the proposals of its Director General. The Russian President has agreed that the IAEA should begin work in this area without delay.”

The readout continued: “The (French) President also called for respect for international humanitarian law, the protection of civilians and the delivery of aid. He reiterated the importance of a negotiated solution, fully acceptable to the Ukrainians."

"Finally, the President of the Republic took advantage of this exchange to relay his concern about an imminent attack on the city of Odessa,” said the Elysee.

The Kyiv Regional Military Administration has appealed to international organizations for help in resolving a growing humanitarian crisis in the region.

"Thousands of people found themselves in isolation, because of direct hostilities, and in some places for 5-6 days they survive without electricity, water, food, medical help and means of subsistence. They are in direct danger," the administration said.

"We ask for a humanitarian corridor to help people affected by the warfare. For the sake of people's lives and health, to ensure the immediate delivery of medical and food aid to those residents of Kyiv region who need it. And to ensure the evacuation of civilians," the administration added,

It said: "The most difficult situation is on the territory from Borodyanka to Hostomel, it is worse than in Mariupol."

Borodyanka and Hostomel, to the north of Kyiv, have seen intense shelling by Russian forces for several days.

Ukrainians have a plan for “continuity of government one way or another,” if Ukrainian President Volodymyr Zelensky is killed, US Secretary of State Antony Blinken said during an interview with CBS' "Face the Nation" on Sunday.

“The Ukrainians have plans in place that I’m not going to talk about or get into any detail about to make sure that there is continuity of government one way or another, and I’m going to leave it at that,” Blinken said.

Blinken also complimented Zelensky for his “leadership” through this crisis.

“The leadership that President Zelensky has shown, the entire government has shown is remarkable, they’ve been the embodiment of these incredibly brave Ukrainian people,” Blinken said. 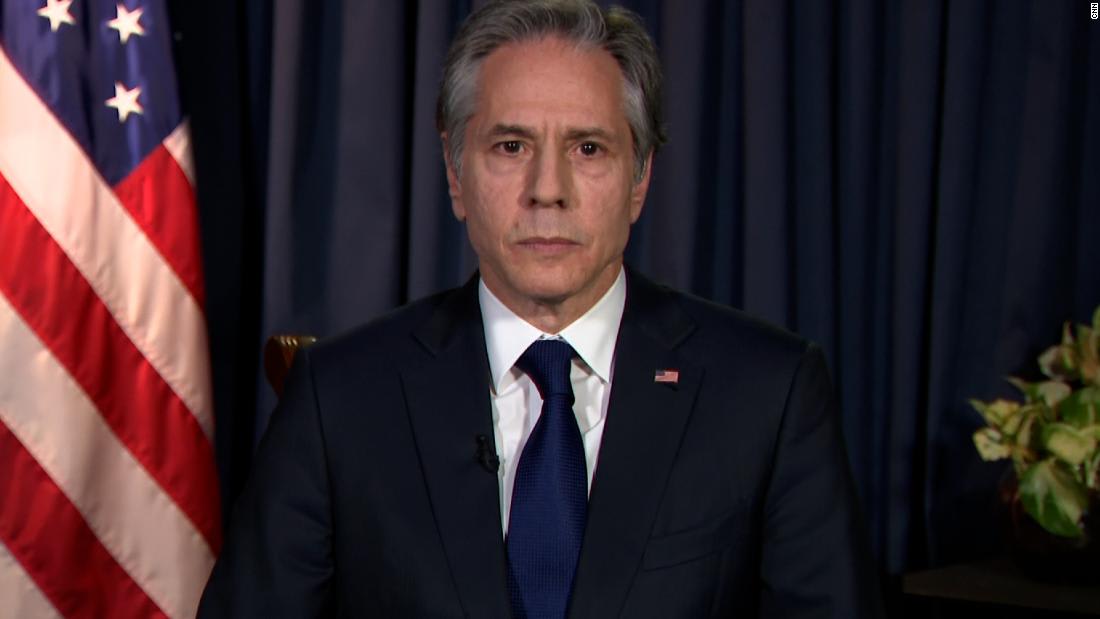 The Swedish Foreign Minister Ann Linde tweeted on Sunday, advising its citizens not to travel to Russia because of the “serious and unpredictable security situation in the wider region.”

More than 360 civilians have been killed in Ukraine since Russia’s invasion began last month, the Office of the UN High Commissioner for Human Rights (OHCHR) said in a statement Sunday.

So far, 1,123 civilians have been wounded, including 364 killed and 759 injured, OHCHR said, while acknowledging that the real figures are likely “considerably higher.”

The data was collected between 4 a.m. Ukraine time on Feb. 24, when the Russian Federation’s armed attack against Ukraine started, to midnight local time on March 5, the statement said.

503 of the casualties were in the Donetsk and Luhansk regions, and 374 casualties in government-controlled territory, according to OHCHR.

Most of the civilian casualties recorded were caused by the use of “explosive weapons with a wide impact area,” the statement said, including shelling from heavy artillery and multi-launch rocket systems, and missile and air strikes.

The OHCHR added it believes the “real figures are considerably higher” especially in government-controlled territory in recent days from where data regarding casualties has been delayed.