Our live coverage of the Russia's invasion of Ukraine has moved here.

"Excuse me for disturbing you, I'm calling regarding my brother."
"Do you have any information about my husband?"
"Hello hotline, is this the place that you can find out if a person is alive?"

These are excerpts from audio recordings made to a Ukrainian government-run hotline. Mothers and fathers, wives, siblings and others are engaged in a desperate search for their loved ones as Russia's war with Ukraine extends seemingly without end.

The shaky voices at the end of the line are not calling to search for Ukrainians, however -- they are looking for information on Russian soldiers.

In recordings shared exclusively with CNN by the Ukrainian officials operating the hotline, the desperation and uncertainty in the callers' voices sheds light on how tightly Moscow is controlling communications about the war.

The recordings indicate that many Russian soldiers seemed to not have known what their plans were or why they were being deployed, and bolster reports of Russian soldiers being denied communication with their families.

Videos have appeared online since the invasion began on February 24 showing Ukrainian civilians and soldiers allowing Russian soldiers to call home and speak with their parents.

The hotline, called "Come Back From Ukraine Alive," was established by the Ukrainian Interior Ministry, which has acknowledged that the initiative is both a humanitarian and a propaganda tool. 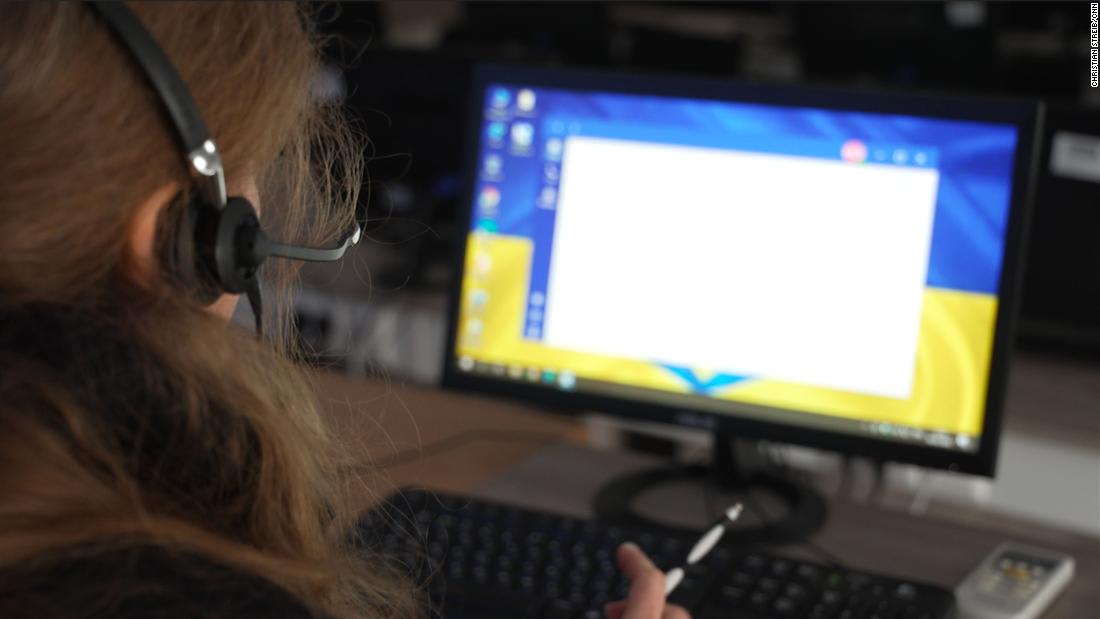 Australia is placing further sanctions on Russia targeting senior military officers and state propagandists for "trying to legitimatise Russia’s unprovoked, unjustified invasion with false narratives such as the 'de-Nazification' of Ukraine,” said the country's Ministry for Foreign Affairs in a statement on Tuesday.

It added that Australia will also sanction ten people of “strategic interest to Russia” for their role in “encouraging hostility towards Ukraine” and promoting pro-Kremlin propaganda to legitimize Russia’s invasion.

Addressing Russian media: The Australian government is also working with Facebook, Twitter and Google to suspend content by Russian state media in Australia, said the statement.

“Russia’s invasion of Ukraine has been accompanied by a widespread disinformation campaign,” the statement said, criticizing Russian President Vladimir Putin's efforts to create “a world characterized by lies and disinformation”.

Ukrainian President Volodymyr Zelensky warned Western countries that the war will not stop at Ukraine -- and an attack on freedoms there will affect the rest of the world.

During an interview on ABC World News Tonight with David Muir on Monday, Zelensky again highlighted the need to secure Ukraine's airspace -- something he has urged the US and NATO to help do, to no avail.

"We cannot allow Russia to be active there only, because they're bombing us, they are shelling us, they are sending missiles, helicopters, jet fighters -- a lot of things," Zelensky said. "We don't control our sky."

He added that he believes US President Joe Biden "can do more" to stop the war. "I am sure he can and I would like to believe that. He is capable of doing that," Zelensky said.

The US stance: The US and NATO oppose creating a no-fly zone in Ukraine, warning that such a move could lead to "full-fledged war in Europe." Russian President Vladimir Putin said Saturday countries imposing such a no-fly zone would be considered to be participating in the conflict.

On Monday, the White House said Biden remains firm in his commitment to keep US troops out of the conflict.

Zelensky's response: The Ukrainian president said missiles were hitting civilian structures including universities and pediatric clinics. If a missile is flying overhead, "I think there is no other answer ... they need to be shot down. You have to preserve lives," he said.

And he warned the war would affect the rest of the world:

"Everyone thinks that we are far away from America or Canada. No, we are in this zone of freedom. And when the limits of rights and freedoms are being violated and stepped on, then you have to protect us. Because we will come first. You will come second. Because the more this beast will eat, he wants more, more, and more."

Russian President Vladimir Putin's invasion of Ukraine is increasingly targeting civilians as his military runs into a fiercer-than-expected resistance and more and more refugees head to the border.

Meanwhile, his government has tightened its grip on the media to control what Russians see and think:

What this means for Russia: The country and government have been "authoritarian for a long time, it's getting worse and worse and worse," said Beth Sanner, former deputy director of National Intelligence.

Russia is also increasingly cut off from much of the West, with heavy sanctions and a growing number of businesses pulling out from Russia -- including Netflix and TikTok.

Putin's vision: The Russian strongman could be seeking a Russian empire of sorts, according to Fiona Hill, a former White House official and Russia expert.

Putin has been slowly acquiring land since 2008, bringing neighbors under his control and setting the precedent that he can take by force whomever resists, she said, pointing to Putin's belief in a "Russkiy Mir" or Russian World.

"He's saying Ukrainians and Russians are one and the same," Hill said. "This idea of a Russian World means re-gathering all the Russian-speakers in different places that belonged at some point to the Russian tsardom."

Like much else about the country, Russia's internet has long straddled East and West.

Russian citizens, unlike their Chinese counterparts, have been able to access US tech platforms such as Facebook, Twitter and Google, though they have been subject to censorship and restrictions — the defining feature of China's internet model.

But Russia's invasion of Ukraine, which has increasingly isolated the country in recent days, could also prove to be the death knell for its presence on the worldwide web.

Facebook blocked: On Friday, as sanctions on Russia tightened and fighting in Ukraine continued to intensify, the Russian government said it had decided to block Facebook, citing the social network's moves in recent days to impose restrictions on Russia-controlled media outlets.

While Facebook is by no means the largest platform in the country, blocking it may be a symbolic move to indicate that President Vladimir Putin's government is prepared to go after big global names if they don't toe the party line. (Instagram and WhatsApp, which are more popular in Russia and also owned by Facebook's parent company Meta, have not yet been blocked). Already, the country's main telecom agency, Rozkomnadzor, is exerting pressure on Google (GOOGL) over what it terms "false" information, and has reportedly restricted Twitter (TWTR) as well. Other platforms are choosing to halt operations on their own.

Crackdown on information: Being cut off from Russia may not pose an existential threat to Western tech platforms, some of which count their audience in the billions. But these moves have major implications for the ability of Russians to access information and express themselves freely. At a more fundamental level, it could also further accelerate the fracturing of the global internet as we know it.

The US State Department said a tweet from Russia’s Embassy in the United Kingdom was a “flat out lie.”

The tweet, posted Monday, claimed that Russia's military actions aimed "to stop any war that could take place on Ukrainian territory or that could start from there,” quoting Russian Foreign Minister Sergei Lavrov.

US State Department Spokesman Ned Price responded on Twitter, saying: “This is a flat out lie. Russia’s special military operation is instigating a war in Ukraine. Ukraine does not want a war. #StopTheLies.”

US Secretary of State Antony Blinken spoke on Monday with Ukrainian Foreign Minister Dmytro Kuleba "to offer continued support to the people and government of Ukraine and to condemn Russia’s attacks on Ukrainian cities and mounting civilian deaths," according to a State Department readout.

"Secretary Blinken and Foreign Minister Kuleba discussed ongoing diplomatic efforts to stop Putin’s war of choice," it said. "The Secretary reiterated the United States’ steadfast solidarity with the brave people of Ukraine, as they continue to resist Russia’s premeditated and unprovoked attacks."

US President Joe Biden is facing bipartisan criticism over the potential for new oil deals with Saudi Arabia, Venezuela, and Iran to offset the loss of Russian oil.

Manchin added: “Venezuela is a rough, tough actor, okay. And so is Iran. Saudis can pick up some slack, this and that and everything but we can do what we got to do.”

Sen. Mark Kelly, who is up for re-election, said of Biden’s indecision on Russian oil imports: “Well, I’m decided on this. I don't think we should be buying Russian oil and gas.” Asked about getting oil from Venezuela potentially, Kelly said: “There are also opportunities here in the United States to increase production of gas.”

And Sen. Rick Scott, who is the head of the Senate GOP campaign committee, said: “We should stop importing Russian oil period. And we shouldn't be going to Venezuela. … When are we going to learn that we can't be relying on these thugs?”

The top three House Republicans also slammed Biden over the potential move and called on the President to instead ramp up domestic oil production — something the GOP has long been pushing for.

House Minority Leader Kevin McCarthy said it’s “wrong” for Biden to seek oil from those other countries and argued it’s better for US jobs and national security for Biden to open up American oil and gas. “Why would he continue to fund these people who fund terrorists?” McCarthy said to CNN.

House GOP conference chair Elise Stefanik called it “outrageous” that Biden is looking to “dictators around the world” for energy. And House Minority Whip Steve Scalise told reporters “it’s time for President Biden to start looking right here in America for our energy.”

Rank-and-file Republicans had equally harsh words for Biden: Rep. Chris Stewart of Utah, a member of the House Intelligence Committee, called it “kind of nuts” and warned it would “empower Venezuela” and “enrich Iran.” And Rep. Mario Diaz-Balart of Florida said he was “speechless” and hoped the reports weren’t true.

“I don't think anybody could be this much of an imbecile. And I say that painfully because it's too reckless, too stupid, too idiotic, too dangerous for it to be true,” Diaz-Balart said. “This will do nothing, by the way. Venezuelan oil? They're barely producing right now."