More than 406 civilians have been killed in Ukraine since Russia’s invasion began on February 24, the Office of the UN High Commissioner for Human Rights (OHCHR) said in a statement Monday.

A further 801 civilians have been injured, OHCHR said.

OHCHR acknowledged that the real figures are likely “considerably higher.”

These figures include data collected between 4 a.m. local time on February 24, 2022, when the Russian Federation’s armed attack against Ukraine started, and midnight on March 6, 2022, the OHCHR said.

The Biden administration is weighing the possibility of easing sanctions on Venezuela so that the country can begin producing more oil and selling it on the international market, according to a person with direct knowledge of the matter.

The move would be aimed at reducing global dependence on Russian oil amid Russia’s invasion of Ukraine, and at isolating Russia from one of its key allies in South America, the person said.

Biden administration officials, including National Security Council Director for the Western Hemisphere Juan Gonzalez and US special presidential envoy for hostage affairs Roger Carstens, were dispatched to Caracas over the weekend for talks on the issue, the person said, as well as to discuss the American citizens currently detained in the country. The New York Times first reported the officials’ travel to Venezuela.

Remember: Washington imposed sanctions on Venezuelan oil in 2019 and closed its embassy in Caracas after deeming Venezuelan President Nicolas Maduro’s election victory in 2018 to be a sham.

U Secretary of State Antony Blinken said on Sunday that the US and allies were actively exploring ways to ban Russian oil imports, thereby damaging Russia’s economy even further. The West has been reluctant so far to impose significant sanctions on Russia’s energy sector because of how it might impact the global economy, but are now getting closer to doing so as Europe works to diversify its energy sources.

Republican Sen. Marco Rubio has already criticized the discussions, tweeting over the weekend, “Rather than produce more American oil,” Biden “wants to replace the oil we buy from one murderous dictator with oil from another murderous dictator.”

But the source with knowledge of the talks said that merely increasing American oil production would not make up for the amount lost by cutting off Russia.

US Secretary of State Antony Blinken said Monday that 70% of the additional $350 million in defense support to Ukraine that President Joe Biden authorized in recent weeks “is already in the hands of Ukrainians, being used very effectively against Russian aggression.”

Speaking at a news conference in Latvia, Blinken said he expected $10 billion in emergency aid to be provided by the US Congress “very quickly,” and said such aid will go to “additional security assistance,” “humanitarian assistance for Ukraine both inside Ukraine and outside,” and “to further efforts to reinforce NATO's eastern flank.”

The top US diplomat reiterated that the US believes a no-fly zone has the potential to widen the conflict.

“Our efforts are all in the direction of ending this war as quickly as possible, ending the suffering as quickly as possible. And what we don't want to do is to widen it, and to widen it to our own countries, to our own territory. The no-fly zone, to be very clear about what that involves is, that means that if Russian planes violate the zone that's declared, we shoot them down. And that runs the considerable risk of creating a direct conflict between our countries and Russia and thus a wider war, which is in no one's interest, including the Ukrainian people,” Blinken said.

The third round of talks between Ukraine and Russia has started in Belarus, state media agency Russia 24 announced on air.

The location for this event has not been disclosed. The first round of talks, on February 28, and the second set, on March 3, both took place in Belarus.

As Russia's invasion continues, more companies continue to announce that they're ceasing to do business with Russia.

Prada's spokesperson Marta Monaco told CNN, "the Prada Group suspended its retail operations in Russia. Our primary concern is for all colleagues and their families affected by the tragedy in Ukraine, and we will continue to support them." The statement follows a pledge by Prada and other Italian fashion houses to donate aid to Ukraine. Companies giving support include Armani, Bottega Veneta and Dolce & Gabbana.

Responding to the donation, UNHCR's representative for Italy, Chiara Cardoletti, said, "We estimate that 12 million people in Ukraine will need help and protection, while more than 4 million Ukrainian refugees could need protection and care in the neighboring countries in the forthcoming months." Citing the need for immediate assistance, Caedoletti added in her news statement, "Enormous resources are needed and this is why we hope that in the coming hours other companies in the fashion sector, and in other sectors as well, will give their contribution.”

Nissan announced today it is suspended the export of vehicles to Russia. In a news statement released by the company, the Japanese manufacturer added that it "anticipates that production will stop soon at our plant in St. Petersburg."

The statement stressed Nissan's commitment and support to assisting with the humanitarian crisis in Ukraine by creating a 2.5 million euros fund (about $2.7 million). "1 million Euros would be donated to the Red Cross and other non-profit organizations to support ongoing emergency activities that provide lifesaving assistance and essential supplies to families and children at this time. Where it can help, the company is also prepared to donate vehicles."

The company's CEO, Makoto Uchida, said “We have all been moved by the suffering of so many people and families – including members of our own Nissan family. We have created the Nissan Cares fund to stand by our employees, and to support to the international efforts working around the clock to respond to this immeasurable human tragedy.”

Other car companies that are stopping their business with Russia include: General Motors, Toyota, and Volkswagen.

On Sunday, American Express became the latest credit card company to announce it is ending its operations in Russia as its invasion into Ukraine escalates.

The company said in a statement that globally issued American Express cards will no longer work in Russia, and cards issued in Russia won't work outside the country.

American Express also said it is ending its business operations in Belarus.

"This is in addition to the previous steps we have taken, which include halting our relationships with banks in Russia impacted by the US and international government sanctions," American Express said in a statement Sunday.

Social media companies are also restricting access in Russia. In the latest move, TikTok said Sunday it is suspending some features in Russia in light of the country’s new law penalizing misinformation.

“In light of Russia's new ‘fake news’ law, we have no choice but to suspend livestreaming and new content to our video service while we review the safety implications of this law,” the company tweeted. “Our in-app messaging service will not be affected.”

The company added in a blog post: “We will continue to evaluate the evolving circumstances in Russia to determine when we might fully resume our services with safety as our top priority.”

Facebook parent company Meta said that it would block access to Russian news outlets RT and Sputnik across the European Union.

The move comes after receiving “requests from a number of governments and the EU to take further steps in relation to Russian state controlled media,” Nick Clegg, the company’s VP of global affairs, wrote in a tweet.

Meta has also said it has applied algorithmic restrictions to Russian state media that should prevent it from surfacing as prominently in users’ feeds.

A whole host of more companies are pulling out of Russia. Read more here.

Russian forces are "100% targeting civilians" along evacuation routes in Ukraine, said Oleksandr Markushyn, the mayor of Irpin, a suburb that lies northwest of Kyiv, which was hit by a Russian military strike on Sunday.

"These are not an army, these are animals," the mayor told CNN. "They're killing civilians. They're shelling out our city, our residential buildings, and ambulances. They're firing on ambulances. This is just a monstrosity."

On Sunday, two mortar or artillery shells hit a checkpoint the suburb, killing a family with two children and several other civilians trying to flee the Russian invasion, according to the mayor.

"A group of people were being led to evacuate, and within 50 meters, I saw a mortar ordinance blew up and killed two children, tore them in two in front of my very eyes, plus their parents. They were killed in a matter of seconds," he said Monday.

The checkpoint has been the site of intense shelling by the Russian military in recent days, Ukrainian authorities have said.

On the first day of the Irpin evacuation effort, Russian forces shelled the train and on the second day they blew up the rail track, injuring three people, Markushyn said, maintaining that Russian forces are "targeting these routes" and "trying to intimidate" the population of Irpin.

Kyiv police said Monday a further 2,000 people have been evacuated from Irpin.

The UK is no longer able to provide in-person consular assistance to British people in Ukraine, according to Foreign Commonwealth and Development Office (FCDO).

"The UK Government retains a diplomatic presence in Ukraine, but we can no longer provide consular assistance in person due to the deteriorating security situation," the FCDO said in updated travel advice published Monday.

British nationals have also been advised to "remain vigilant" if they decide to remain in Ukraine throughout potential combat operations and to keep their departure plans under constant review.

United States' Chairman of the Joint Chiefs of Staff Gen. Mark Milley went last week to an undisclosed airfield near the Ukrainian border that has become a hub for shipping weapons, a senior Defense Department official said, seeing firsthand the multinational effort to get weapons into Ukraine amid Russia's unprovoked invasion.

While at the airfield, Milley met with troops and personnel and examined the shipment activity, the official said Friday. The site has become a beehive of activity in recent days, going from a handful of flights each day to as many as 17 — the field's maximum capacity.

The airport's location remains a secret to protect the shipments of weapons, including anti-armor missiles, into Ukraine. The Russian military has not targeted these shipments once they enter Ukraine, the official said, but there is some concern Russia could begin targeting the deliveries as its assault advances.

The US and other NATO members have so far sent Ukraine 17,000 anti-tank missiles and 2,000 stinger anti-aircraft missiles, a senior US official told CNN.

Since even before Russia's invasion began late last month, the skies above Europe have been filled with military cargo aircraft of the US and others, particularly C-17s, the backbone of the US airlift fleet. The flights have been repositioning troops along NATO's eastern flank, but also moving weapons to the transfer points where they can be delivered to Ukraine. The pace of the flights has only increased.

Since Russia's invasion began, 14 countries have sent security assistance to Ukraine, the official said, some of whom had rarely sent such substantial equipment before.

The "vast majority" of a $350 million US security assistance package has already been delivered to Ukraine, according to the official, only one week after it was officially approved by the White House.

Once in possession of the weapons, the Ukrainians have used them to slow and stall Russian assaults in different parts of Ukraine.

The human toll of the invasion of Ukraine continues to mount as Russian forces upped their bombardment of civilian areas and infrastructure over the weekend.

As conditions worsened in a number of key Ukrainian cities, the United Nations said more than 1.5 million people have fled the country so far. 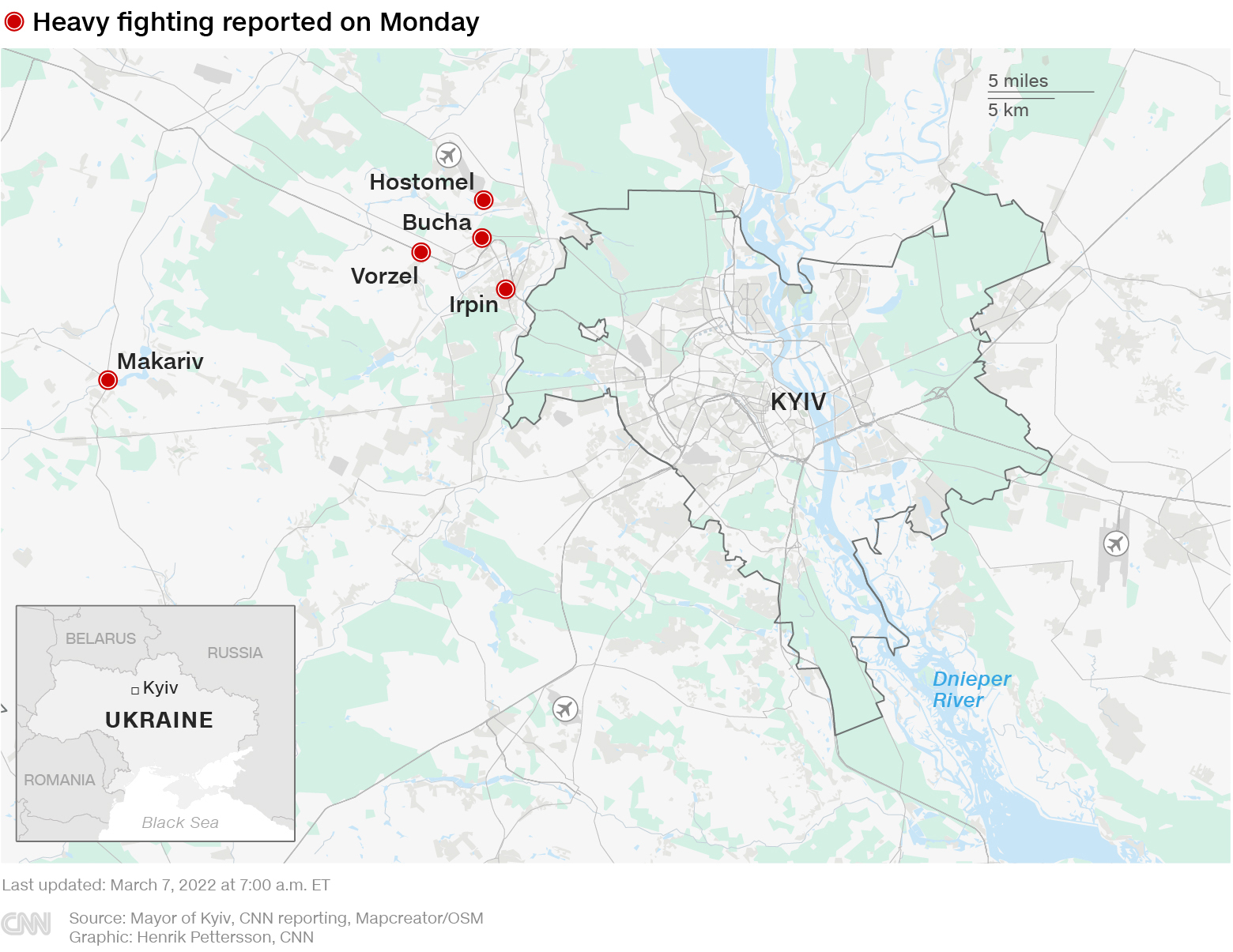 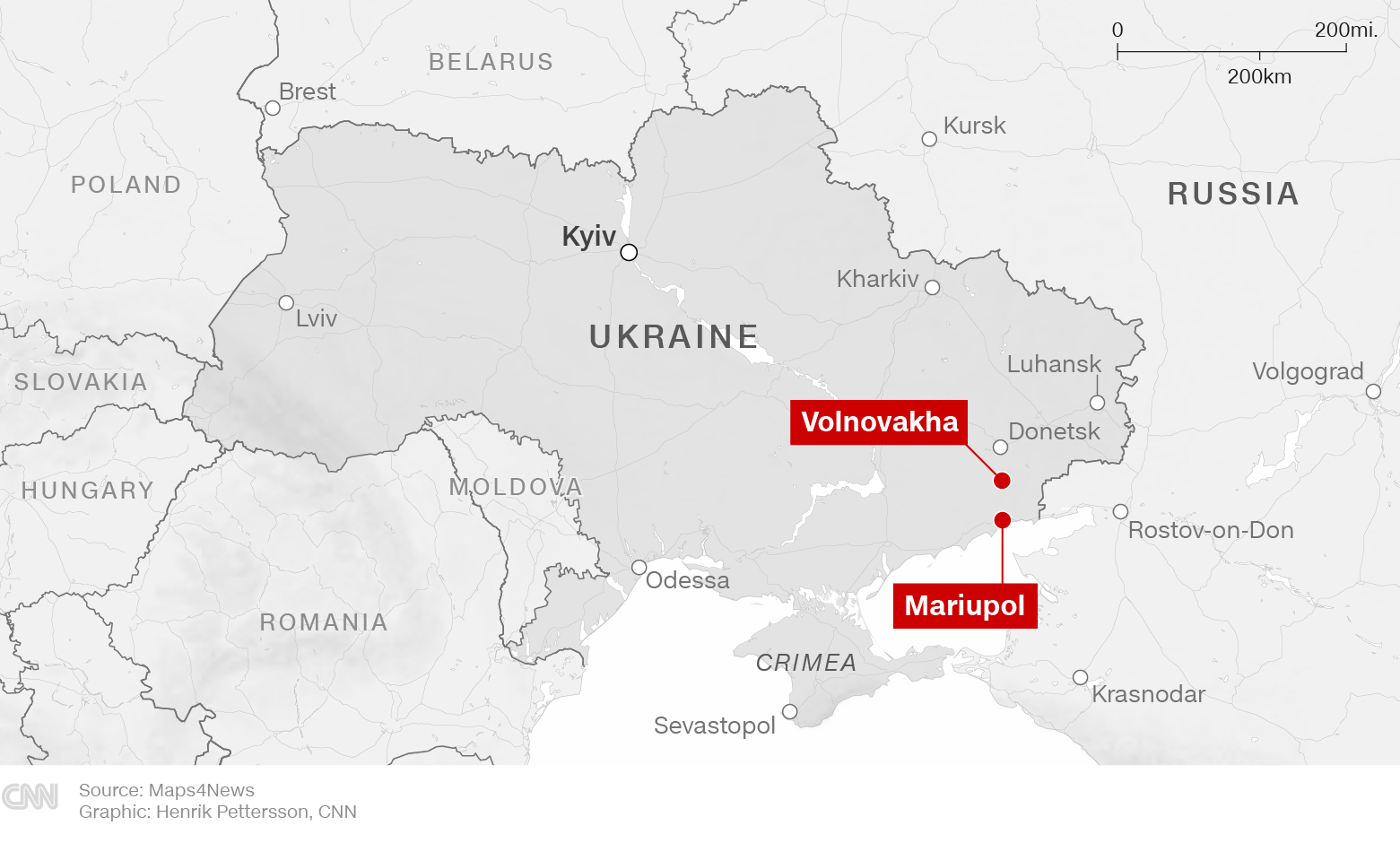 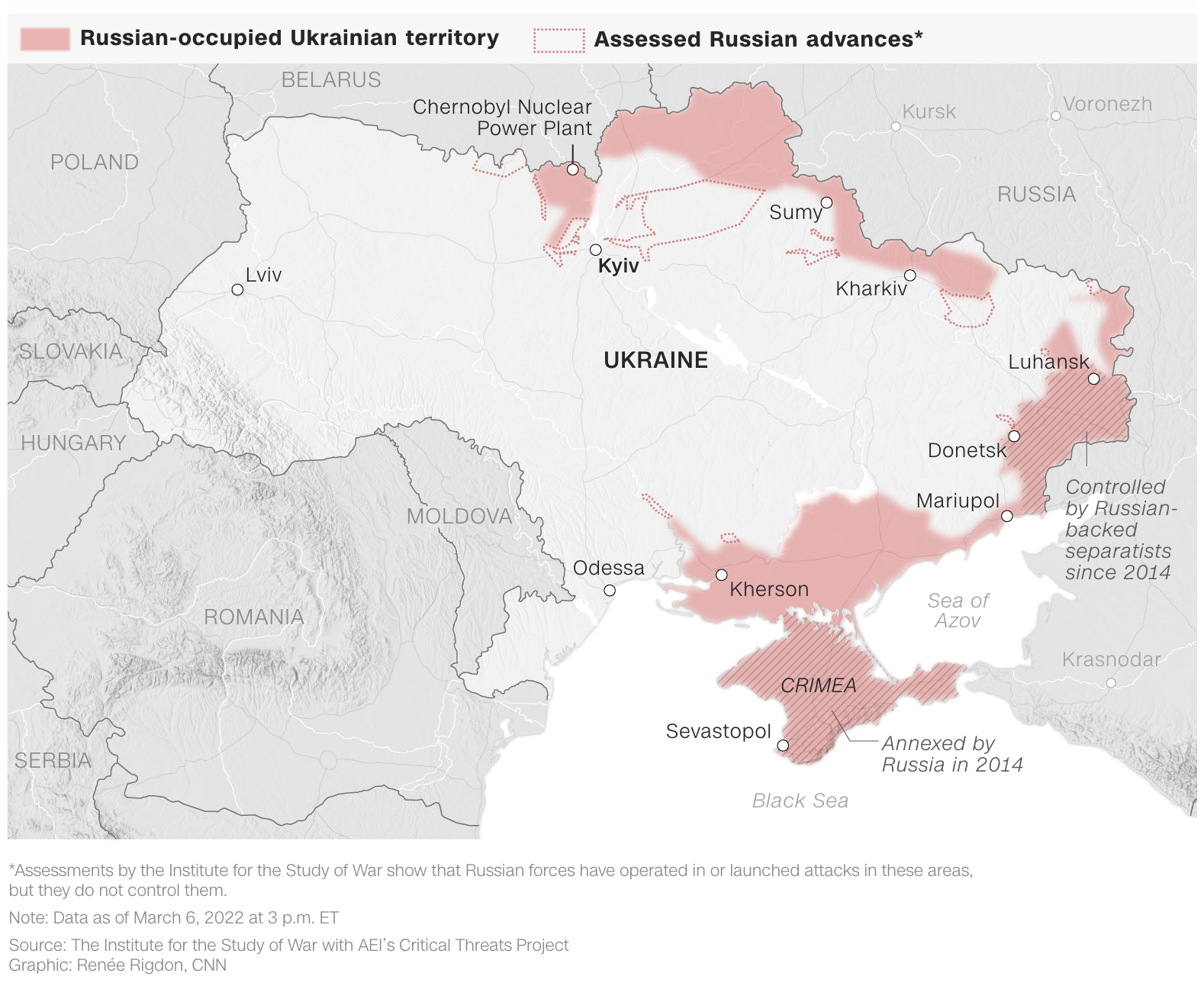 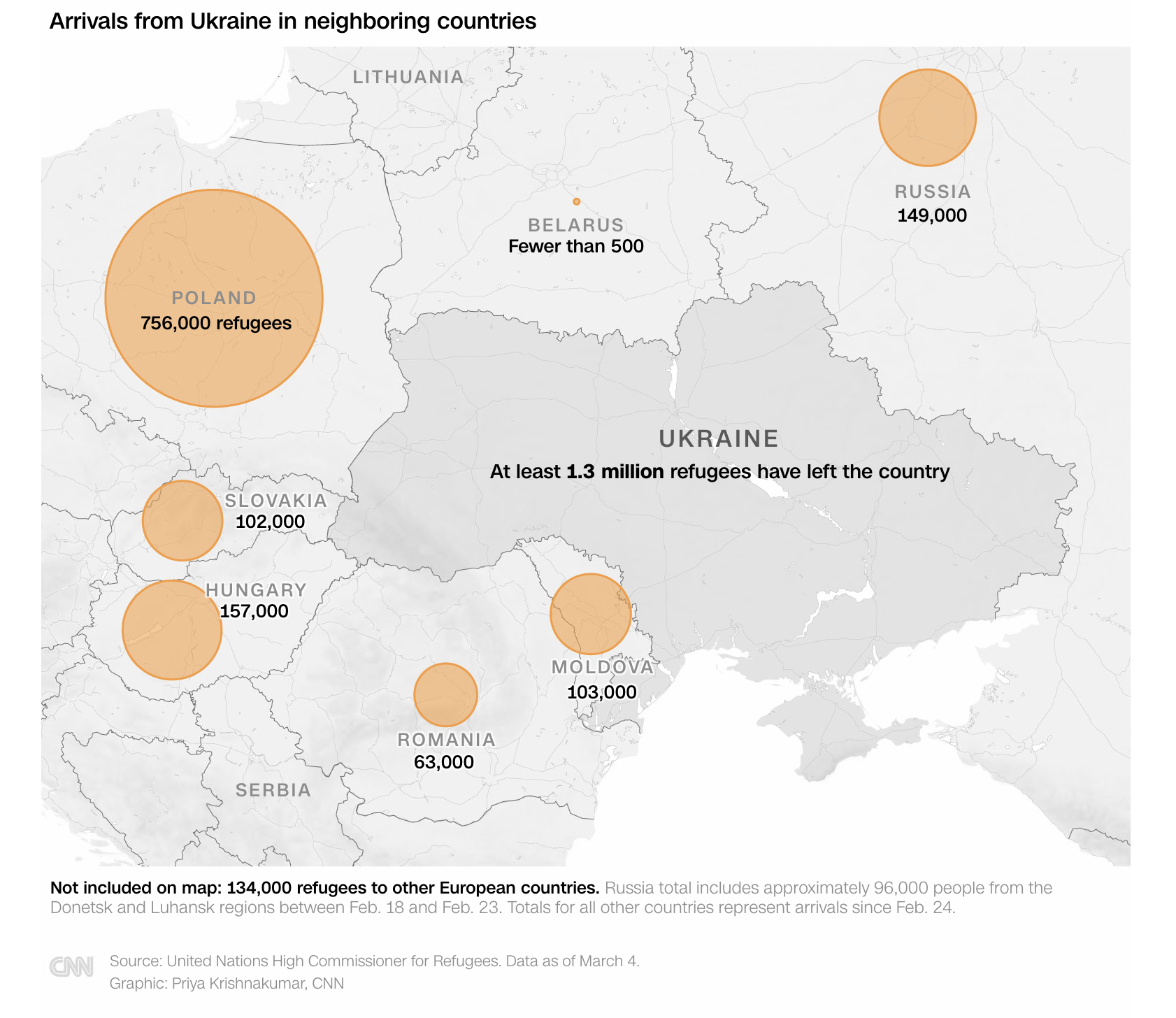