Oleksandr Markushyn, the mayor of the Kyiv suburb of Irpin, says he has rejected a demand from Russian forces to surrender the town.

In a Telegram account on Tuesday, Markushyn said he had received a threat on his "life and health and demanding for the complete surrender of Irpin" the previous day.

"I'm surprised that these monsters still haven't understood -- Irpin doesn't give up, Irpin can't be bought, Irpin fights!" he said.

"I have a counter-offer to the occupiers to leave [the] Irpin community within 24 hours and save the lives and health of several thousand Russian conscripts, whose mother, sister, daughter, grandmother and partner are waiting for them at home."

The Russians declared a ceasefire for the Kyiv area on Tuesday. It's unclear yet whether a cessation of hostilities is being held around the Ukrainian capital.

The UK defense ministry on Monday accused Russian forces of targeting evacuation corridors and killing “several civilians” trying to evacuate Irpin, according to the latest intelligence assessment released publicly by the department.

The ministry noted that due to heavy fighting Irpin has been without heat, water, or electricity for several days.

Eight civilians were killed in the midst of an evacuation of the town, Mayor Markushyn said in a statement on Telegram Sunday. 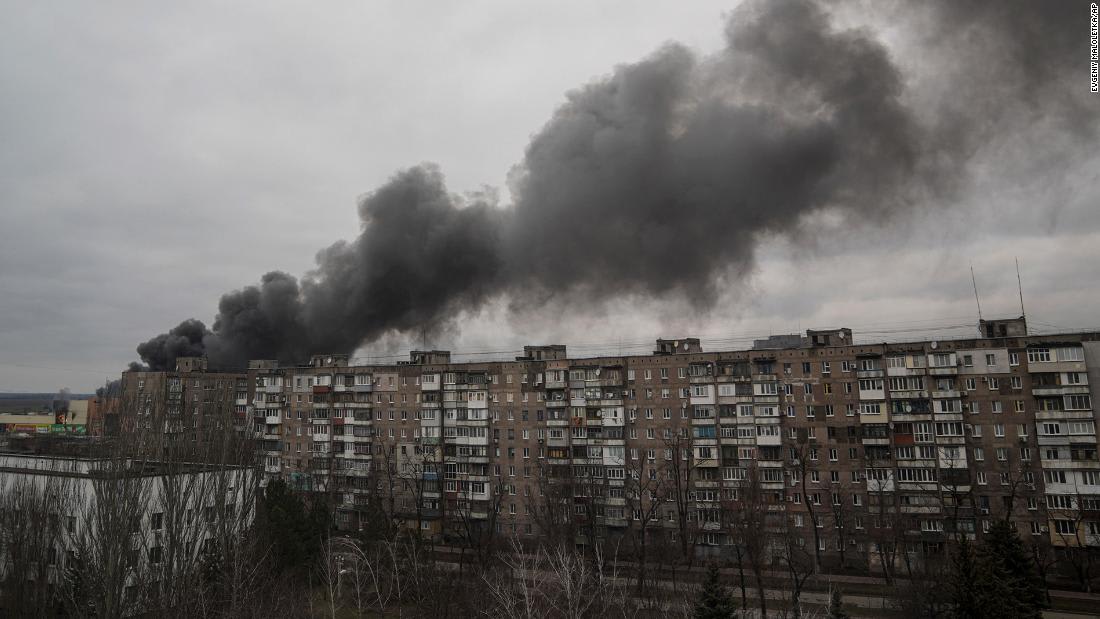 'A family died... in front of my eyes': Civilians killed as Russian military strike hits evacuation route in Kyiv suburb

The Ukrainian government has agreed on an evacuation corridor for fleeing civilians from the northeastern city of Sumy, which has seen sustained Russian attacks and airstrikes in recent days.

Iryna Vereshchuk, the Ukrainian minister of Reintegration of Temporarily Occupied Territories, said the corridor had been agreed by the Russian Ministry of Defense in a letter to the International Committee of the Red Cross.

The route for the evacuation corridor would lead from Sumy through Holubivka and Lokhvytsia to Poltava, a city in central Ukraine. It will open from 9 a.m. to 9 p.m. on Tuesday, Vereshchuk said, adding that "all obstacles ... must be removed along the entire route."

She added that Ukraine hoped the Sumy corridor would be followed by others.

Bombing in Sumy: The announcement comes after a Russian airstrike on an apartment building in Sumy killed nine civilians, including two children, according to the State Emergency Services (SES) in Ukraine.

On Monday, Ukraine's Ambassador to the UN accused Russia of blocking attempts to evacuate civilians, adding it was “appalling” that Russian troops were opening fire on evacuees after both countries had allocated certain roads to be utilized as evacuation corridors.

Nine people were killed by a Russian air strike of the northeastern city of Sumy on Monday night, according to the State Emergency Services (SES) in Ukraine.

Two children were among the dead, SES said.

Ukraine's Interior Ministry said the attack was an air strike against an apartment building. One injured woman was rescued from the rubble.

The walls of Lviv's National Museum stand bare. Elaborate gold lacquered panels, on display after being recovered from 17th century Baroque churches, have been bundled up and hidden in the basement in a race to save the city's cultural treasures from possible Russian attack.

"Today we see how Russia is shelling residential areas (and) even people that are evacuating," says National Museum Director of Lviv, Ihor Kozhan. "They guaranteed they wouldn't but now we can't trust them. And we need to take care of our heritage because this is our national treasure."

The Russian invasion of Ukraine has already destroyed a museum containing works by renowned Ukrainian painter Maria Prymachenko, whose vivid and imaginative art was admired by both Pablo Picasso and Marc Chagall.

Now, the city of Lviv, often dubbed Ukraine's cultural capital, is racing to protect its rich collection of historic art.

Ancient artifacts in cardboard boxes: The rush to save its books, paintings and other artifacts has left little time to wait for specialized packing materials. Instead, volunteers make do by hastily nailing together crates from whatever wood is available.

On Monday, volunteers hastily packed ancient manuscripts into cardboard boxes originally intended for transporting bananas to supermarkets. Among them was a thousand-year-old bible decorated with gold thread.

At religious sites, people are also preparing for the worst. The Armenian Cathedral of Lviv removed a medieval wooden sculpture, depicting the crucifixion of Jesus Christ, for safe storage. Having survived World War II, the giant stained-glass windows of Lviv's Latin Cathedral have now been boarded up with steel plates. Many of the city's landmark statues are now swaddled in bubble wrap. 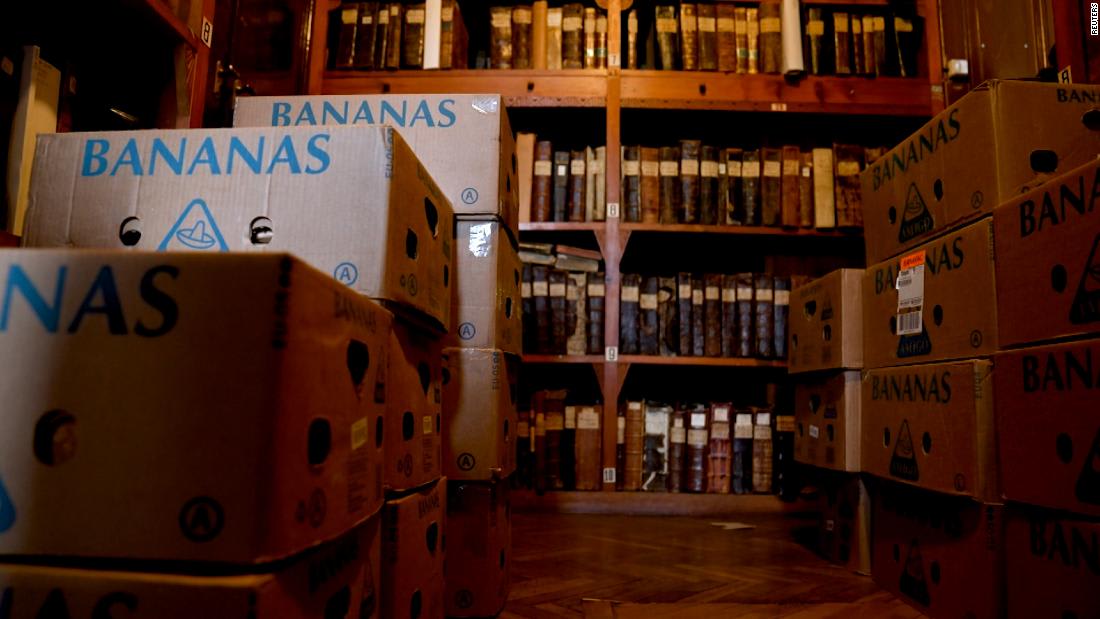 Museums race against time to save Ukraine's cultural treasures

At least 1.2 million refugees have crossed the border from Ukraine into Poland since the Russian invasion began on February 24, the Polish Border Guard tweeted early Tuesday.

141,500 refugees passed through the border on Monday alone, according to the Border Guard.

In total, at least 1.7 million refugees have left Ukraine, according to the United Nations. Though the majority have crossed into Poland, many others have also entered Hungary, Slovakia, Moldova and Romania.

The mayor of Lviv said on Tuesday that the city, located in western Ukraine, was struggling to provide food and housing to some 200,000 displaced Ukrainians who fled there from war-torn parts of the country.

“About 200,000 Ukrainians have already arrived in Lviv. Women, children, the elderly, hiding from shelling and bombing, were forced to flee their homes. We accommodate everyone provide food and everything necessary. But the trains are going, and the numbers are growing,” said Mayor Andriy Sadovyi in a video statement.

He urged international organizations to provide help "here in Lviv, in Ukraine."

"We need mobile centers for temporary stay with equipped bathrooms and food outlets. Medical and psychological support, medicines, bulletproof vests, and helmets. Mobile hospitals for children and adults,” he said.

In a separate statement Monday, Sadovyi had said the city was reaching the limit of its capacity. About 440 cultural and educational facilities in Lviv are being used to house displaced persons, along with 85 religious buildings, the mayor’s office said.

The comments come after eight civilians were killed over the weekend while fleeing the Russian army's advance.

"For several hours on March 6, 2022, Russian forces bombarded an intersection on a road that hundreds of civilians were using to flee the Russian army's advance in northern Ukraine to Kyiv," the HRW said in a statement Tuesday.
"About a dozen Ukrainian security force members and at least two military vehicles were at the intersection during the attack, but they were vastly outnumbered by the large number of fleeing civilians,” the statement said, citing witnesses.

HRW added that over recent talks between Russia and Ukraine have “failed” to establish safe routes of evacuation, and urged all parties involved to "take all feasible steps to remove the civilian population from the vicinity of fighting or military objects.”

Almost all of Russia’s proposed routes out of Ukraine lead to Russia or its close ally Belarus, which Ukrainian authorities described as unacceptable.

On Monday, Ukraine's Ambassador to the UN accused Russia of blocking attempts to evacuate civilians, adding it was “appalling” that Russian troops were opening fire on evacuees after both countries had allocated certain roads to be utilized as evacuation corridors.

The US Embassy in Ukraine said Tuesday the security situation throughout Ukraine “continues to be unpredictable,” warning US citizens trying to flee that conditions at each border “can change very quickly.”

Wait lines can also change without warning, the embassy said.

Photos from various border points have shown long lines of thousands of people waiting to cross.

The embassy also reminded its citizens not to cross into Belarus, citing “the arbitrary enforcement of laws, the risk of detention, the Russian military attack on neighboring Ukraine and the build-up of Russian military in Belarus along the border with Ukraine.”

“Do not travel to Russia,” it added, warning of “the potential for harassment against US citizens by Russian government security officials” and the embassy’s “limited ability to assist US.citizens in Russia.”

The World Bank has approved a $723 million emergency financing package of loans and grants for Ukraine as it fights Russia’s invasion, it said in a statement Monday.

The package includes a $350 million loan supplement to a prior World Bank loan.

The bank also promised to work on creating another $3 billion dollar support package for Ukraine to be rolled out “in the coming months." In its statement, it said it would provide additional support for Ukraine’s neighbours as they take in more than 1.7 million refugees,.

“The World Bank Group stands with the people of Ukraine and the region," said World Bank President David Malpass in the statement. "This is the first of many steps we are taking to help address the far-reaching human and economic impacts of this crisis.”