Of the total 7,251 people, who are "mostly women and children," 6,967 are Ukrainian nationals, France's Interior Ministry told CNN.

"We can see that things are increasing as the conflict progresses and today we have 25,000 places of refuge for these people," said Interior Minister Gerald Darmanin, speaking alongside Schiappa, adding that France has seen 3,000 arrivals in two days.

Darmanin added that he will visit Poland with the German Interior Minister before traveling to Romania on Friday.

The ministers’ comments come a day after France launched an inter-ministerial crisis unit to prepare for and manage the arrival of Ukrainian refugees in France.

"Right now, the air bombardment of Mariupol is underway," said Petro Andryushchenko, adviser to the mayor of Mariupol.

Andryushchenko claimed that the airstrikes were being carried out in order to destroy road infrastructure and completely isolate the city.

There is no word from the Russian side on the Ukrainian claim.

Late Wednesday, the Russian Defense Ministry claimed that its forces had advanced in several districts around Mariupol.

Two weeks into Russia's invasion of Ukraine, Russian Foreign Minister Sergey Lavrov falsely claimed Thursday that the country “did not attack" its neighbor.

Lavrov, who met with Ukrainian Foreign Minister Dmytro Kuleba on Thursday, said the West is behaving dangerously. That includes the European Union, who “have violated their principles and values” while delivering weapons to Ukraine, according to Lavrov.

The meeting between Kuleba and Lavrov ended without an agreement reached on evacuation corridors or a ceasefire in Ukraine.

Some context: Russia’s unprovoked invasion of Ukraine began in the early hours of February 24 and its attacks have continued unabated since then. Russia has, repeatedly and without any basis, asserted that it was not the aggressor in the conflict, which it launched after amassing up to 150,000 troops on the border with Ukraine in what it claimed were military exercises but were in fact preparations for war.

A meeting between Ukrainian Foreign Minister Dmytro Kuleba and Russia Foreign Minister Sergey Lavrov in Turkey has ended without an agreement reached on evacuation corridors or a ceasefire.

Kuleba said he raised the prospect of establishing an evacuation route to allow civilians to flee from the besieged city of Mariupol, but “unfortunately Minister Lavrov was not in a position to commit himself to it.”

In a press conference following the short meeting, Kuleba said a 24-hour ceasefire was also raised in order “to resolve the most pressing humanitarian issues,” but he said they “did not make progress” on the issue “since it seems there are other decision makers for this matter in Russia.”

Kuleba said they did agree to continue efforts to “seek a solution to the humanitarian issues on the ground,” and added that he is ready to meet again “in this format if there are prospects for substantial discussion and seeking solutions.”

More than 95,000 refugees have arrived in Germany from Ukraine since the beginning of the Russian invasion two weeks ago, according to Germany's interior ministry.

The ministry says it has registered 95,913 refugees from Ukraine, but the actual number of incoming refugees could be significantly higher, an interior spokesperson told CNN Thursday.

German Federal Police are now carrying out ''intensified checks'' at the border between Germany and Poland, where most Ukrainian refugees are coming from.

Over the past three days more than 13,000 refugees arrived in Berlin by train or bus, said Giffey, adding that others fled from Ukraine by car.

Most refugees from Ukraine intend to stay in Berlin, but the city has asked other German federal states for help.

More than two million people have fled Ukraine since the Russian invasion began, according to the UN High Commissioner for Refugees.

These are some of the neighboring countries where Ukrainian refugees have fled: 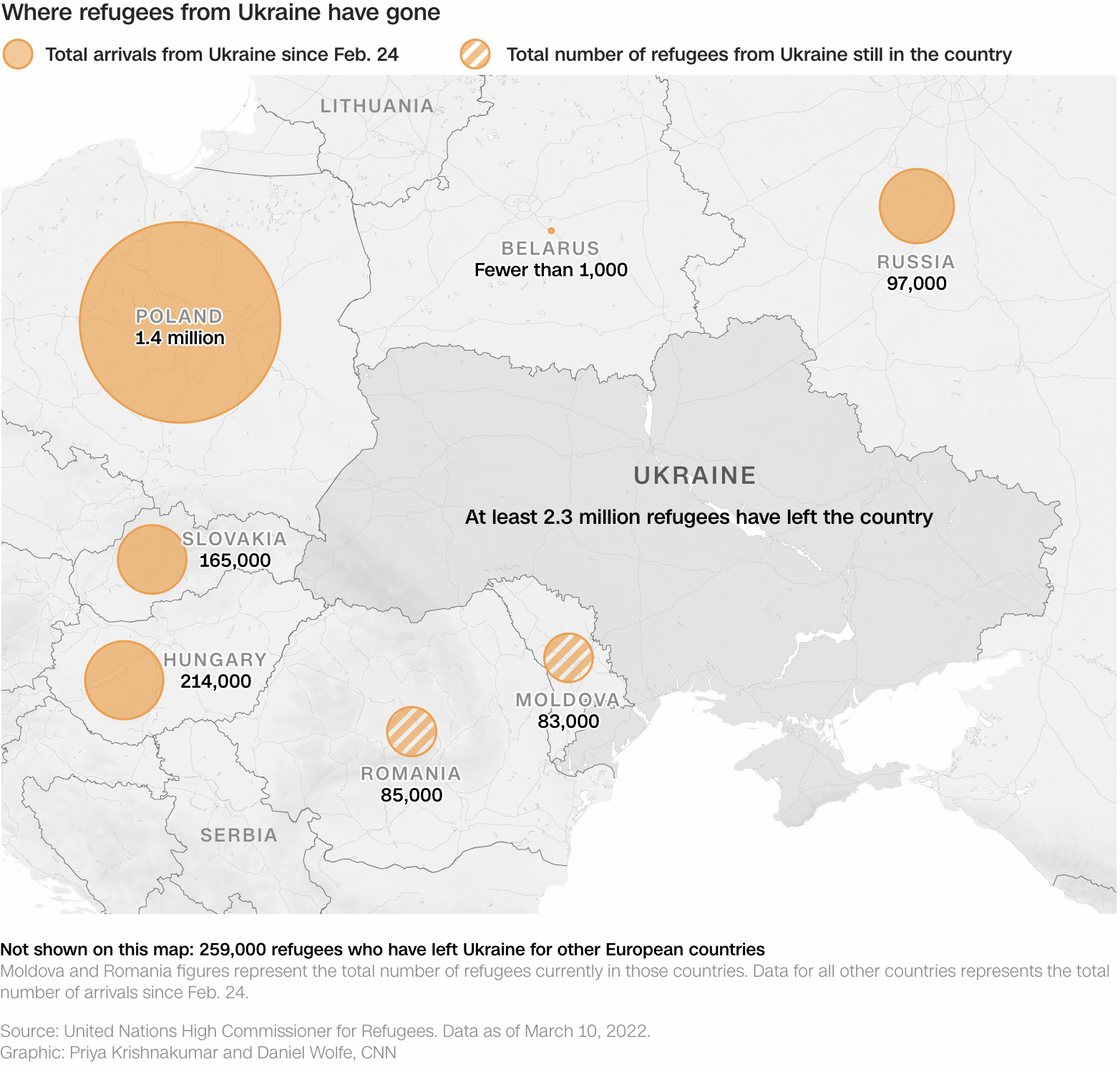 "It is my deep conviction that there will be a European Union which will be in a few years, I don't know when, in a few years, probably extended to Ukraine, to Moldova, to Georgia, perhaps to other countries," Beaune told French broadcaster France Inter, speaking ahead of a meeting of EU leaders today and Friday in Versailles, outside Paris.

The admission of Ukraine to the EU though "is not for tomorrow," he added.

Beaune joined a chorus of global condemnation of a Russian "massacre" on a Ukrainian maternity hospital, adding that strikes against civilians were intensifying.

The minister also reiterated the need to move away from Russian gas as "fast as possible," adding that "Russia counts on the fact that we have need of her."

"By buying Russian gas, we are financing the war of Vladimir Putin," he said.

He said that this would require investment, and the possibility of funding these efforts through joint European debt would be discussed at the Versailles summit.

Ukrainian athletes and officials called for an end to the war in their country as they observed a minute’s silence at the Beijing Paralympics on Thursday.

Led by Ukrainian Paralympic Committee president Valerii Sushkevych, the entire delegation held up a "Peace For All" banner in the Zhangjiakou Athletes Village, accompanied by raised fists.

"It’s not only one-minute solidarity. Today one minute was about thousands of people, including children and people with disabilities," said Sushkevych.

"Today all civilized mankind looks in solidarity at this terrible war in our country, but I want to ask you (about your) role. If mankind is civilized, (it) must not overlook, (it) must stop the war in my country.

"(There) must be an understanding that children, people, women must live, not die. Today many, many people died. Stop war. If you are civilized, you must stop war."

Ukraine’s team captain Grigorii Vovchyynski called for a no-fly zone over the country.

"It (war) must be stopped now. It's not life for Ukraine, it's not life for our children, no future for all the world. Everyone (who) saw it, you must do something. Please close the sky above Ukraine."

Head coach Andriy Nesterenko added that seven members of the team were from Kharkiv, a city which in under ongoing attack by Russian forces.

Nesterenko said some of them will not "have the possibility to come back," adding: "Their flats, their private houses are already destroyed."

Ukrainian athletes have so far claimed six gold medals at the Games and sit third in the table behind China and Canada.

In a statement Thursday, the UK government said Abramovich has had "his assets frozen, a prohibition on transactions with UK individuals and businesses, a travel ban and transport sanctions imposed."

Abramovich, who has owned Chelsea since 2003, announced last week that he was selling the club, but the sanctions now cast doubt on the sale and the immediate future of the Premier League side.

"To ensure the club can continue to compete and operate we are issuing a special licence that will allow fixtures to be fulfilled, staff to be paid and existing ticket holders to attend matches while, crucially, depriving Abramovich of benefiting from his ownership of the club," UK Culture Secretary Nadine Dorries said in a tweet.

She added that the government's priority is to "hold those who have enabled the Putin regime to account."

According to the UK government, Chelsea can continue to "fulfil its fixtures and carry out football business," but certain actions will not be permitted, such as selling tickets for games beyond those already sold to fans.

Abramovich and Putin ally Igor Sechin are among seven oligarchs and politicians to be added to the UK's sanctions list.

The sanctions are estimated to be worth close to $20 billion (£15 billion), the UK government said.

Last month, UK lawmaker Chris Bryant called for Abramovich to lose ownership of Chelsea after seeing a leaked 2019 UK government document identifying Abramovich as an individual of interest due to his "links to the Russian state and his public association with corrupt activity and practices."

In its statement, the UK government said Abramovich, who is worth around $12 billion (more than £9 billion), is "one of the few oligarchs from the 1990s to maintain prominence under Putin."

Seven further oligarchs and politicians are being added to its sanctions list, including:

Three people died after they were injured in a Russian bomb attack on a maternity hospital in southern Ukraine, Mariupol city council said Thursday

"As of today, we know that after the terrorist bombing by Russian aircraft of the children's hospital in Mariupol there are 17 victims — children, women, doctors — and three died, among them one child, a girl," the council said.

The full extent of the casualties is unclear but preliminary reports said at least 17 people were injured in the bombing.