Russia has potentially suffered 6,000 troops killed in action since its invasion of Ukraine began, according to a US official, who cautioned that an accurate estimate of combat casualties is incredibly difficult to make — especially as the fighting unfolds in real time.

The official said the number of Russian troops killed could be in the 5,000 to 6,000 range or even higher, but emphasized there is low confidence in the numbers.

Some context: The latest assessment comes after the head of the Defense Intelligence Agency Lt. Gen. Scott Berrier told the House Intelligence Committee Tuesday the intelligence community assesses that 2,000 to 4,000 Russian troops have been killed in Ukraine.

Berrier also said there is “low confidence” in the assessment.

The number of wounded could be three times as high, he added.

Russia has escalated its attacks on civilians as Ukrainians rush to escape through evacuation corridors. Wednesday saw Russian forces bomb a maternity hospital in Mariupol, fighting in the streets of Voznesensk and gridlock as people tried to escape areas near Ukraine's capital, Kyiv.

Harrowing images show a heavily pregnant woman clutching her belongings, her face covered with cuts, as she walks down a bombed-out staircase at a maternity and children's hospital in the city of Mariupol, southern Ukraine. Inside, smashed incubators and bloodied beds lay among the wreckage.

Russian forces bombed the hospital Wednesday, Mariupol officials said — an attack described by Ukraine's President as an “atrocity" and "proof of a genocide."

Leader's reaction: Ukraine's President Volodymyr Zelensky said the bombing is "proof of a genocide of Ukrainians taking place" and repeated his call for NATO to declare a no-fly zone over Ukraine.

More bombings: A city administration building and a university in Mariupol, less than a kilometer from the bombed-out hospital, has been identified by CNN as a second location in the city hit by an apparent Russian military strike.

Evacuation corridor: The attacks came as humanitarian corridors were set up around Ukraine to evacuate civilians to safety. It is unclear if any people made it out of Mariupol, which has been has been under siege for days and isolated by Russian forces.

"Desperate situation": About 1,300 civilians have been killed in Mariupol since the Russian invasion began, two officials in the city said. Residents have been cut off from water and electricity for days, and on Tuesday Ukraine's Foreign Minister accused Russia of committing war crimes by holding 300,000 civilians “hostage.” Photos show bodies being placed into a mass grave in the city.

It comes two weeks after Russian forces seized control of the plant, which was the site of the world’s worst nuclear disaster in 1986.

What happens if Chernobyl loses power?: The International Atomic Energy Agency (IAEA) said it had been told by Ukraine that Chernobyl had lost power, but that it saw “no critical impact” on the plant’s safety.

"Specifically, regarding the site’s spent fuel storage facility, the volume of cooling water in the pool is sufficient to maintain effective heat removal from the spent fuel without a supply of electricity. The site also has reserve emergency power supplies with diesel generators and batteries," IAEA Director General Rafael Mariano Grossi said in a statement.

Is Chernobyl still active? The Chernobyl site is not currently operational and handling of nuclear material has been halted, the IAEA said, citing information from Ukraine’s nuclear regulator. The facility holds decommissioned reactors as well as radioactive waste facilities.

However, the lack of power "is likely to lead to a further deterioration of operational radiation safety at the site," Grossi said.

Lines down: On Tuesday, the IAEA said it had lost contact with remote data transmission from safeguard monitoring systems at Chernobyl.

Staff pushed to the limit: The loss of power at Chernobyl has raised further concerns for some 210 personnel that have been working for two weeks straight at the site since Russian forces seized control of the facility. Grossi said they have been effectively living there, working around the clock and unable to rotate shifts.

“From day to day, we are seeing a worsening situation at the Chornobyl NPP, especially for radiation safety, and for the staff managing the facility under extremely difficult and challenging circumstances,” Grossi said. “I repeat my urgent appeal to the forces in effective control of the plant to respect internal radiation protection procedures, to facilitate the safe rotation of staff and to take other important steps to ensure safety.”

Ukrainian President Volodymyr Zelensky said “all in all almost 35,000 people were rescued” via the humanitarian corridors established Wednesday.

“Today we were able to organize three humanitarian corridors: from the city of Sumy, from city of Kyiv and Kyiv region, and from Enerhodar,” he said, adding that efforts will continue Thursday.

Zelensky said Ukrainian authorities were preparing six humanitarian corridors to get people out of areas under attack by Russian forces.

“We are praying to be able to evacuate people from Mariupol, from Izium, from Volnovakha, etc. to evacuate to safe places of free Ukraine. And I'm sure that every Ukrainian that knows these people need help will make sure these people feel cared for," he said.

While some routes were successful in evacuating people to safety, others had to be abandoned.

What happened: Local authorities in areas close to Kyiv that have been under attack for more than a week said efforts to evacuate people to safety Wednesday failed. The city council of Bucha said 50 buses had been blocked by the Russian military in nearby Stoyanka.

The White House warned Wednesday that Russia could use chemical weapons in Ukraine or manufacture a "false flag" operation that uses them.

White House press secretary Jen Psaki, slamming what she called false claims from Russia that the US is developing chemical weapons in Ukraine, tweeted:

"Now that Russia has made these false claims, and China has seemingly endorsed this propaganda, we should all be on the lookout for Russia to possibly use chemical or biological weapons in Ukraine, or to create a false flag operation using them. It’s a clear pattern.”

Secretary of State Antony Blinken warned earlier this year of the possibility of Russia carrying out a fake or real chemical weapons attack as a manufactured pretext for an invasion into Ukraine. But his comments came before Russia’s full invasion began.

The swift US rejection of a Polish plan to get MiG-29 fighter jets into Ukraine is the clearest example yet of the complications that the US and its NATO allies face trying to help Ukraine defend itself against Russia’s brutal assault while ensuring they don’t get dragged into a wider war.

The negotiations fell apart almost as quickly as they came together.

But on Wednesday afternoon, the Pentagon bluntly announced it was opposed to the idea, which Defense Secretary Lloyd Austin conveyed in a call to his Polish counterpart.

“Secretary Austin thanked the minister for Poland’s willingness to continue to look for ways to assist Ukraine, but he stressed that we do not support the transfer of additional fighter aircraft to the Ukrainian air force at this time, and therefore have no desire to see them in our custody either,” Pentagon press secretary John Kirby said at a briefing.

The episode underscores how the US and its allies may be reaching the limits of what they can do to help Ukraine — while staying out of the conflict — and points to possible cracks in an alliance that has remained strongly unified in the early part of the war as members enacted stiff sanctions and provided security aid.

It also demonstrates that the Biden administration is still working to get on the same page. 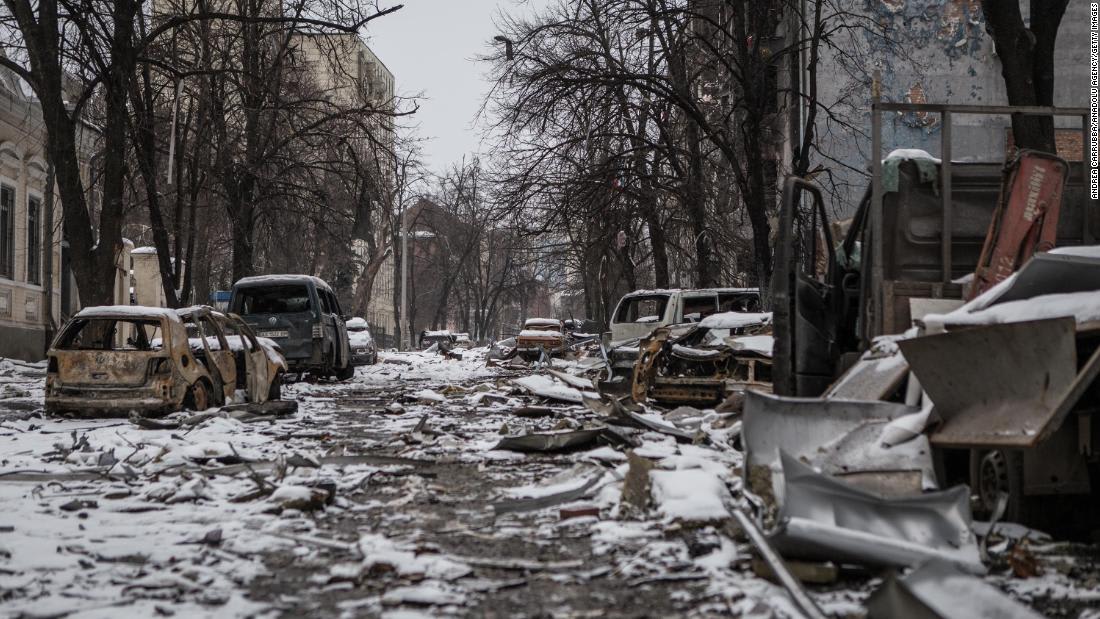 Ukrainian President Volodymyr Zelensky asked why a maternity hospital was a "threat" to Russia, in a video message posted to Telegram late Wednesday night.

The video comes after a maternity hospital in Mariupol was bombed earlier in the day.

“Russian bombs fell on a hospital and maternity center in Mariupol. A children’s hospital, a working maternity hospital, those buildings are ruined!” the President said.

Zelensky said at least 17 people were injured in the attack and authorities are continuing to search through the rubble for more victims.

Russia claims Ukraine was establishing combat positions at the hospital, something CNN has not been able to verify.

In a video message posted to Telegram on Wednesday, Mariupol Mayor Vadym Boichenko called on the global community for help and urged them to “close the sky over Ukraine” following the bombing of a maternity hospital in the city.

“Today I am asking the global community for help. Close the sky over Ukraine. Our will has not been broken, we will fight to the end,” Boichenko said, “We have motivated soldiers and officers who defend our homeland. But today we need support.”

The mayor said he is sure the time will come when “all these occupiers will face justice at The Hague” and said this “war crime will be punished, and the perpetrators will burn in hell.”

What happened at the children's hospital is pure evil,” Boichenko said.

Russia claims Ukraine was establishing combat positions at the hospital, something CNN has not been able to verify.

At her regular briefing, Zakharova said that "in Mariupol, the Ukrainian national battalions, having expelled the staff and patients from the maternity hospital, equipped combat positions in it."