In public statements and at international summits, Chinese officials have attempted to stake out a seemingly neutral position on the war in Ukraine, neither condemning Russian actions nor ruling out the possibility Beijing could act as a mediator in a push for peace.

But while its international messaging has kept many guessing as to Beijing’s true intentions, much of its domestic media coverage of Russia’s invasion tells a wholly different story.

There, an alternate reality is playing out for China’s 1.4 billion people, one in which the invasion is nothing more than a “special military operation,” according to its national broadcaster CCTV; the United States may be funding a biological weapons program in Ukraine, and Russian President Vladimir Putin is a victim standing up for a beleaguered Russia.

A CNN analysis reviewed nearly 5,000 social media posts from 14 Chinese state media outlets during the first eight days of Russia’s invasion posted onto China’s Twitter-like platform, Weibo. The analysis found that of the more than 300 most-shared posts about the events in Ukraine almost half were what CNN classified as distinctly pro-Russian, often containing information attributed to a Russian official or picked up directly from Russia’s state media. 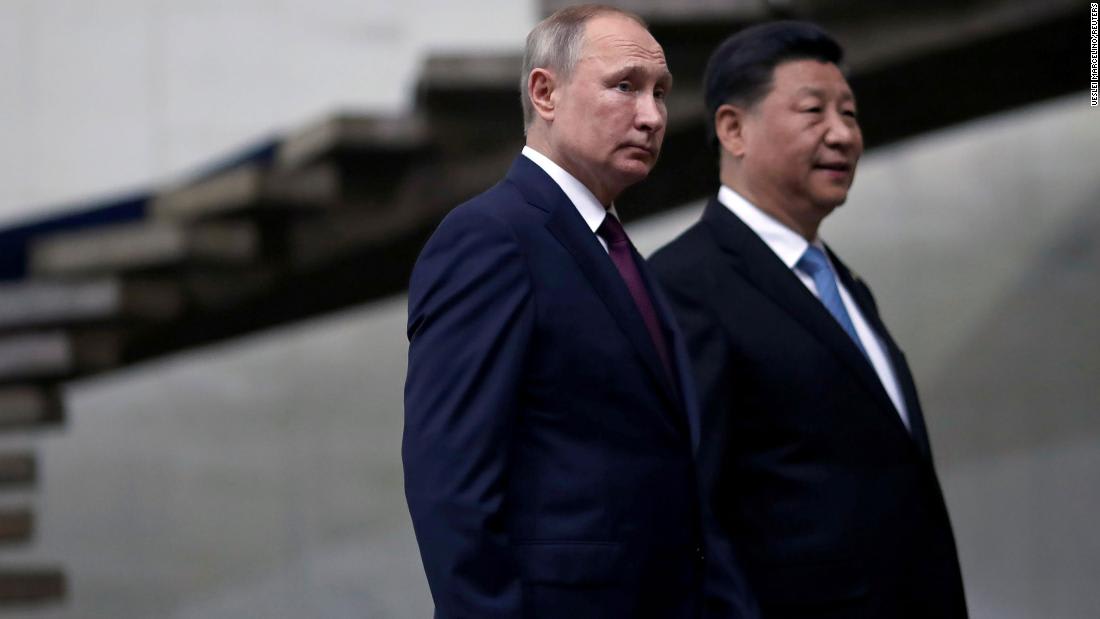 China's promotion of Russian disinformation indicates where its loyalties lie

Disturbing photos show bodies being lowered into a mass grave in the besieged city of Mariupol, southern Ukraine on Wednesday.

The images from the Associated Press show men, some dressed in overalls or blue protective suits, placing bodies into a trench. In some photos, the corpses are in body bags, but others are wrapped only in what appear to be blankets.

The city has been under attack for days, bombarded and isolated by Russian forces.

At least 1,300 civilians have been killed in Mariupol since the Russian invasion began, an adviser to the city's mayor said Wednesday.

Residents have been cut off from water and electricity and on Tuesday Ukraine's Foreign Minister accused Russia of committing war crimes by holding 300,000 civilians “hostage.

"Really, we can't calculate how many deaths we have — I mean three to four times more. We are not even able to count how many people on the streets have been killed by bombing and artillery," Mariupol's deputy mayor, Sergei Orlov told CNN.
"We do not know how many, because we cannot collect all the bodies and we cannot count."

To deal with the sheer number of bodies, city workers dug a deep trench over 75 feet (22 meters) long inside a graveyard and laid to rest the bodies of soldiers and civilians who had been killed during repeated attacks by Russian forces.

Evgeniy Maloletka, a photojournalist with the AP who captured the scene, said some of the bodies are "brought wrapped in carpets or plastic bags." "Forty came Tuesday, another 30 so far Wednesday," he added.

Pressure is growing on the Biden administration and its European allies to justify whether they are doing enough to stop the atrocities that are being inflicted on the Ukrainian people as horrific new images emerged Wednesday from the alleged Russian bombing of a maternity and children’s hospital in Mariupol.

The photographs of pregnant women emerging from the bomb-ravaged hospital in blood-stained clothing were the kinds of images certain to stir the consciences of people around the world watching their own leaders try to respond to Russian President Vladimir Putin’s widening campaign, which is increasingly resulting in civilian casualties.

What the democratic nations of the world are willing to do in the face of mounting Ukrainian casualties and millions of refugees fleeing the country is the most unnerving question now facing the US and its allies. 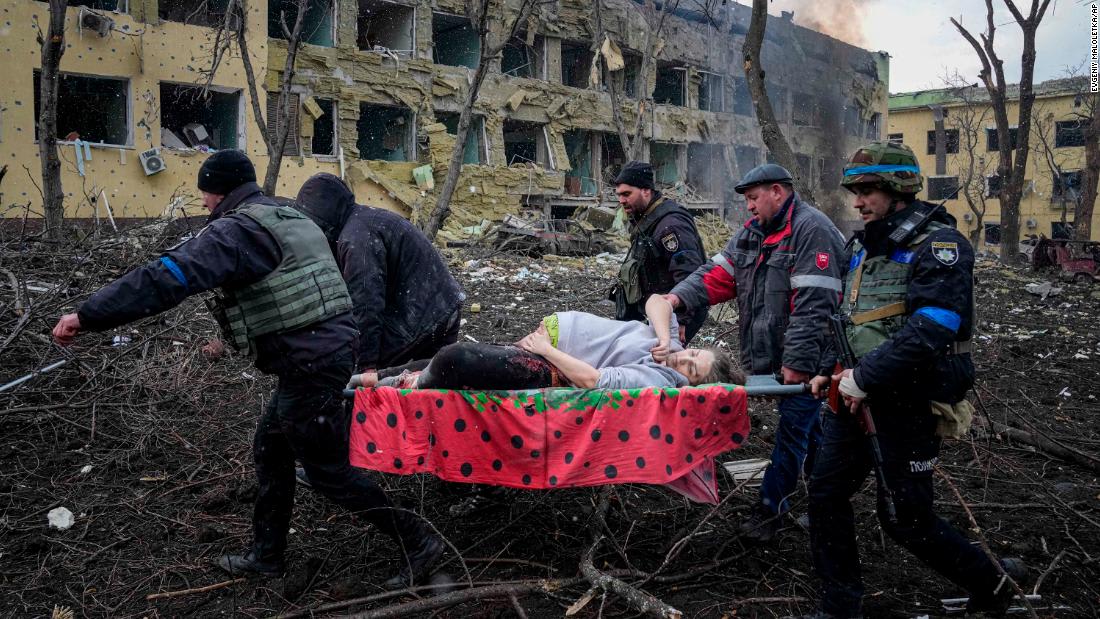 Analysis: Ukrainian hospital bombing increases heat on US and allies to do more to stop Russia

Ukrainian air defenses are largely denying the Russian military access to Ukrainian airspace, a US official said Wednesday, but cautioned Russia’s superior combat power still has the capability to overwhelm the country's defenses.

Russia’s air force is largely avoiding Ukrainian airspace because of an array of anti-aircraft systems that have denied Russia air superiority, according to the US official.

Russia is flying 150-200 sorties per day, but they’re virtually all over Russian territory, the official said. Russian pilots have not ventured far into Ukrainian airspace because of the effective use of surface-to-air missiles, including portable Stingers provided by the US and larger systems.

Although some Russian aircraft have entered Ukrainian airspace quickly for an attack, they don’t loiter or provide significant cover for Russian ground forces.

Russian losses: Russia has lost approximately 20-25 helicopters and 15-20 other aircraft, the official said, while also losing hundreds of vehicles, including tanks and armored equipment. CNN previously reported that Russia has lost 8-10% of its military assets in the invasion.

Some context: The official’s comments come after the Pentagon said it did not support the transfer of Polish MiG-29 fighter jets to Ukraine through the US. Kirby said Wednesday the proposal would offer little benefit to the Ukrainian military, which already has operational aircraft, but entails a high risk of escalation with Russia.

Ukrainians effectively fighting back: Despite the massive Russian advantage in combat power, they have not been able to bring that force to bear at a decisive place and time, the official said. Ukraine has fought back very effectively, using small teams composed of light infantry to attack large Russian convoys which generally travel by road.

The Ukrainians are fighting on their home turf, giving them an advantage in knowing the terrain and allowing them to use the local population as their eyes and ears. The US also has anecdotal evidence of dissension in the Russian ranks.

Russia has potentially suffered 6,000 troops killed in action since its invasion of Ukraine began, according to a US official, who cautioned that an accurate estimate of combat casualties is incredibly difficult to make — especially as the fighting unfolds in real time.

The official said the number of Russian troops killed could be in the 5,000 to 6,000 range or even higher, but emphasized there is low confidence in the numbers.

Some context: The latest assessment comes after the head of the Defense Intelligence Agency Lt. Gen. Scott Berrier told the House Intelligence Committee Tuesday the intelligence community assesses that 2,000 to 4,000 Russian troops have been killed in Ukraine.

Berrier also said there is “low confidence” in the assessment.

The number of wounded could be three times as high, he added.

Russia has escalated its attacks on civilians as Ukrainians rush to escape through evacuation corridors. Wednesday saw Russian forces bomb a maternity hospital in Mariupol, fighting in the streets of Voznesensk and gridlock as people tried to escape areas near Ukraine's capital, Kyiv.

Harrowing images show a heavily pregnant woman clutching her belongings, her face covered with cuts, as she walks down a bombed-out staircase at a maternity and children's hospital in the city of Mariupol, southern Ukraine. Inside, smashed incubators and bloodied beds lay among the wreckage.

Russian forces bombed the hospital Wednesday, Mariupol officials said — an attack described by Ukraine's President as an “atrocity" and "proof of a genocide."

Leader's reaction: Ukraine's President Volodymyr Zelensky said the bombing is "proof of a genocide of Ukrainians taking place" and repeated his call for NATO to declare a no-fly zone over Ukraine.

More bombings: A city administration building and a university in Mariupol, less than a kilometer from the bombed-out hospital, has been identified by CNN as a second location in the city hit by an apparent Russian military strike.

Evacuation corridor: The attacks came as humanitarian corridors were set up around Ukraine to evacuate civilians to safety. It is unclear if any people made it out of Mariupol, which has been has been under siege for days and isolated by Russian forces.

"Desperate situation": About 1,300 civilians have been killed in Mariupol since the Russian invasion began, two officials in the city said. Residents have been cut off from water and electricity for days, and on Tuesday Ukraine's Foreign Minister accused Russia of committing war crimes by holding 300,000 civilians “hostage.” Photos show bodies being placed into a mass grave in the city.

It comes two weeks after Russian forces seized control of the plant, which was the site of the world’s worst nuclear disaster in 1986.

What happens if Chernobyl loses power?: The International Atomic Energy Agency (IAEA) said it had been told by Ukraine that Chernobyl had lost power, but that it saw “no critical impact” on the plant’s safety.

"Specifically, regarding the site’s spent fuel storage facility, the volume of cooling water in the pool is sufficient to maintain effective heat removal from the spent fuel without a supply of electricity. The site also has reserve emergency power supplies with diesel generators and batteries," IAEA Director General Rafael Mariano Grossi said in a statement.

Is Chernobyl still active? The Chernobyl site is not currently operational and handling of nuclear material has been halted, the IAEA said, citing information from Ukraine’s nuclear regulator. The facility holds decommissioned reactors as well as radioactive waste facilities.

However, the lack of power "is likely to lead to a further deterioration of operational radiation safety at the site," Grossi said.

Lines down: On Tuesday, the IAEA said it had lost contact with remote data transmission from safeguard monitoring systems at Chernobyl.

Staff pushed to the limit: The loss of power at Chernobyl has raised further concerns for some 210 personnel that have been working for two weeks straight at the site since Russian forces seized control of the facility. Grossi said they have been effectively living there, working around the clock and unable to rotate shifts.

“From day to day, we are seeing a worsening situation at the Chornobyl NPP, especially for radiation safety, and for the staff managing the facility under extremely difficult and challenging circumstances,” Grossi said. “I repeat my urgent appeal to the forces in effective control of the plant to respect internal radiation protection procedures, to facilitate the safe rotation of staff and to take other important steps to ensure safety.”

Ukrainian President Volodymyr Zelensky said “all in all almost 35,000 people were rescued” via the humanitarian corridors established Wednesday.

“Today we were able to organize three humanitarian corridors: from the city of Sumy, from city of Kyiv and Kyiv region, and from Enerhodar,” he said, adding that efforts will continue Thursday.

Zelensky said Ukrainian authorities were preparing six humanitarian corridors to get people out of areas under attack by Russian forces.

“We are praying to be able to evacuate people from Mariupol, from Izium, from Volnovakha, etc. to evacuate to safe places of free Ukraine. And I'm sure that every Ukrainian that knows these people need help will make sure these people feel cared for," he said.

While some routes were successful in evacuating people to safety, others had to be abandoned.

What happened: Local authorities in areas close to Kyiv that have been under attack for more than a week said efforts to evacuate people to safety Wednesday failed. The city council of Bucha said 50 buses had been blocked by the Russian military in nearby Stoyanka.