Ukrainian President Volodymyr Zelensky said about 100,000 people have been evacuated via evacuation corridors over the past two days.

“One of the main tasks for us today was the organization of humanitarian corridors," Zelensky said in a video address posted to Facebook late Thursday night. "Sumy, Trostyanets, Krasnopillya, Irpin, Bucha, Hostomel, Izium. Almost 40,000 people have already been evacuated this day. They were given safety at last. In Poltava, Kyiv, Cherkasy, Zaporizhzhia, Dnipro, Lviv."

He said humanitarian aid, food and medicine was delivered.

“We are doing everything to save our people in the cities that the enemy just wants to destroy,” Zelensky said.

Mariupol and Volnovakha, however, remain completely blocked, he said, adding that despite Ukrainian officials’ best efforts to make the corridor work, “Russian troops did not cease fire.” Regardless of this, Zelensky said he still decided to send a convoy of trucks carrying food, water and medicine.

“But the invaders started a tank attack exactly in the area where this corridor was supposed to be. Corridor of life. For the people of Mariupol," the president said.

"Right now, the air bombardment of Mariupol is underway," said Petro Andryushchenko, the adviser to the mayor of Mariupol.

“They did it consciously. They knew what they were disrupting. They have a clear order to hold Mariupol hostage, to torture it, to carry out constant bombardment,” Zelensky said.

He added: “Today they destroyed the building of the main department of the State Emergency Service in the Donetsk region. Right next to this building was the place where Mariupol residents were to gather for evacuation”

Earlier in the day, the mayor of Mariupol, Vadym Boychenko, also issued a furious video message condemning what he calls Russia's "cynical and destructive war against humanity" and said every 30 minutes the city was invaded by Russian forces. The mayor said humanitarian aid cannot get through to Mariupol for the sixth day in a row.

Zelensky noted that the state would continue trying to bring Mariupol the aid its people “so desperately need.”

Dmytro Lunin, head of the Poltava region administration, said that “20,000 people left the Sumy region through a green corridor. Buses from Sumy and Trostianets are already arriving in Lubny, from where the evacuees will travel by train to the west of the country.”

CNN cannot independently verify the number of evacuees, but in recent days the Ukrainian authorities have said that tens of thousands of civilians have been evacuated through evacuation corridors from Sumy, including hundreds of foreign students.

Bipartisan talks in the US Senate are taking shape to take more aggressive action on Russia's trade status — after the White House effectively watered down the Russia bill that passed the House Wednesday night.

Initially, there had been a bipartisan and bicameral agreement to revoke the "permanent normal trade relations" (PNTR) that Russia and Belarus enjoy with the United States. But the White House objected to that language, so the bill that passed in the House — which would ban Russian energy imports — instead simply called for a review of Russia's status in the World Trade Organization.

Now, Senate Finance Chairman Ron Wyden, a Democrat from Oregon, told CNN that he is engaging in talks with the top tax writers in Congress and the Biden administration about the matter, as pressure grows to include tougher language in the House bill when the Senate takes it up — as soon as next week.

"I believe the Russians — the inhumane behavior of Russia does not justify it get the fruits of the international community," Wyden told CNN.

GOP Sen. Mike Crapo from Idaho, the ranking Republican on the Finance Committee, said he probably wouldn't support the House bill without stronger language on its trade status — and made clear there would be an effort to amend it.

"The question is PNTR, which is absent. And then they had some other stuff on the WTO in there, which is kind of hollow if we don’t do PNTR," Crapo said. "So, I probably would not support it because it doesn't have the key things that you need for a proper trade response."

US lawmakers are expected to pass a massive spending bill this week that would provide for a one-time $13.6 billion infusion of military and humanitarian aid to Ukraine as it fights back against Russia's invasion.

The House of Representatives voted late Wednesday night to approve the legislation, and the Senate will need to pass it next.

The amount of money the bill includes for Ukraine increased as lawmakers negotiated over the past several days, growing from the $10 billion the White House had asked for last week.

Here's a look at what is in the bill and how the Ukraine aid is expected to be spent:

The bill also calls for $25 million for the US Agency for Global Media, an independent federal agency, to combat disinformation in news broadcasts abroad.

Read more about the legislation here.

The mayor of the Ukrainian city of Mariupol, Vadym Boychenko, has issued a furious video message, condemning Russia for its "cynical and destructive war against humanity."

Boychenko spoke of "two days of hell" after the bombing of a maternity hospital on Wednesday in which at least three people died, including a child.

"Today, they cynically shelled the State Service of Mariupol for Emergencies," he said in the video that showed the extensive damage to the building. "Every 30 minutes, Mariupol was invaded by Russian aviation that was shooting at civilian buildings killing civilians — elderly, women and children."

"It's genocide that was created by the Russian army with Putin," Boychenko said.

The mayor also said there is the "highest level of cynicism" around the evacuation corridors for civilians and humanitarian aid to pass.

"They cynically keep hostage of 400,000 Mariupol citizens that are waiting and hoping for a humanitarian corridor to open up," he said in the video. "Humanitarian aid can't get through to Mariupol for the sixth day now, although Russians claim it was peaceful and quiet in the occupied Mariupol. It's the highest level of cynicism."

The US has seen an “increase” in the use of “long-range fires, bombardment, missile launches, both from aircraft” and “mobile” missile launchers by Russian forces in Ukraine over the last few days, a senior US defense official told reporters on Thursday.

“I mean, just looking at the imagery they are clearly hitting populated areas and causing a lot of damage, so we definitely have seen and independently can verify an uptick in the increase of long-range fires as they have struggled to overcome the challenges in momentum that they have suffered in the first couple of weeks,” the official said.

The official said the US expected Russian forces to “adapt” and “overcome” the initial logistical challenges they were facing, and that’s what the world is seeing in the increased use of long-range fires on major population centers in Ukraine.

“You’re starting to see a little bit of that happening in just the last 24 as they begin to creep a little closer towards Kyiv from the northwest,” the official said.

Russian forces have “encircled Mariupol,” but they have not taken it, the official added. 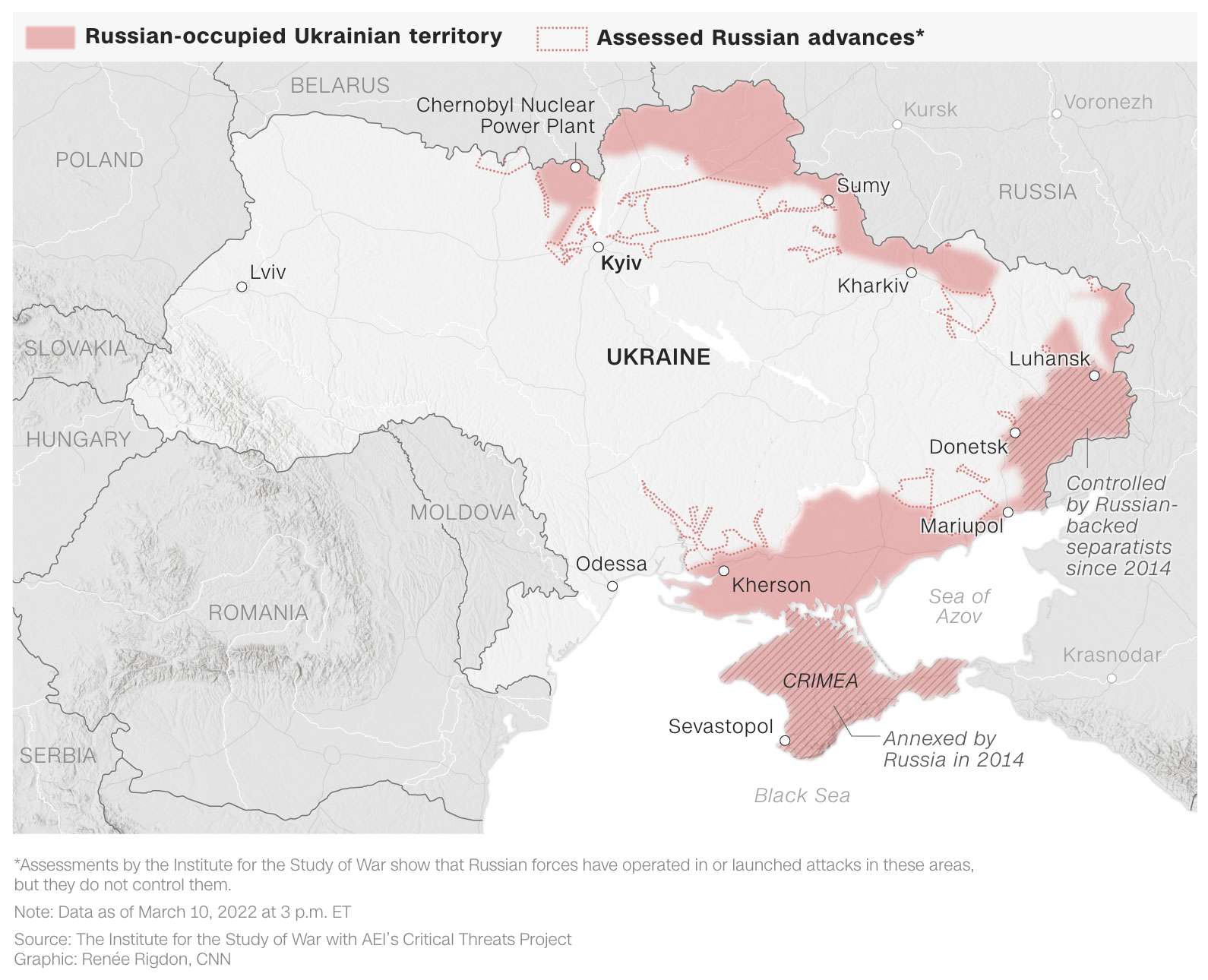 Due to "strong Ukrainian resistance," Russian forces are increasing their number of deployed forces to encircle key cities which will reduce the number of forces available to continue advancing, according to an intelligence update from the UK’s Ministry of Defence on Thursday.

The UK MoD tweeted the update saying, “Due to strong Ukrainian resistance, Russian forces are committing an increased number of their deployed forces to encircle key cities. This will reduce the number of forces available to continue their advance and will further slow Russian progress.”

The UK MoD also tweeted that protests against Russian occupation have been reported throughout the week in the occupied cities of Kherson, Melitopol and Berdyansk, with 400 “reportedly detained by Russian forces in the Kherson Oblast yesterday.”

The Ukrainian State Emergency Services (SES) has released new video showing their staff members defusing a bomb from a downed Russian fighter jet in the northern Ukrainian city of Chernihiv.

A statement from the SES accompanied the video, which was published on March 9, which said that a group of pyrotechnic workers and the SES underwater demining department worked to defuse the bomb. The SES said they worked to clear 22 separate requests for defusing or demining in Chernihiv on March 9.

CNN previously reported that the jet crashed in western Chernihiv on March 5. The Ukrainian military claimed responsibility for shooting down the Russian fighter jet.

The plane crashed into a residential area, the SES said, adding that it was unknown if there were casualties. The crash caused fires in four private homes.

Emergency services in the northeast Ukrainian city of Kharkiv say they are tackling a fire near the Kharkiv Institute of Physics and Technology.

The fire was at a dormitory near the institute.

CNN has not been able to confirm the cause of the fire.