Ukrainian President Volodymyr Zelensky is ready to talk to Russian President Vladimir Putin directly — but "will not make any compromise to the Russian position during these negotiations," his deputy told CNN.

Though talks between the Ukrainian and Russian foreign ministers, held Thursday in the Turkish city of Antalya, did not yield any major breakthrough, Ukraine hadn't been too optimistic from the start, said Igor Zhovkva, Deputy Head of the Office of the President of Ukraine.

“This is a really good thing that they met, but unfortunately we can say that the Minister of Foreign Affairs of Russia is not the one making the final decision. The final decision to stop war, to make a ceasefire, to withdraw troops is made by one person only," he said, apparently referring to Putin.

Zelensky ready to talk: Zhovkva said that though Zelensky was ready for a diplomatic solution, he has not heard from the Russian President personally or his aides.

“The last thing I heard from them was we have to still work under the format of two delegations … But, look, even the agreements reached during these negotiations are not held," Zhovkva said, pointing to humanitarian corridors in Ukraine that are "being kept in custody by Russian forces."

What Ukraine is willing to give: Zhovkva said Ukraine was open to neutrality "if the NATO bloc is not ready for the time being to accept Ukraine."

"But at the same time, we do need hard security guarantees for Ukraine so these awful wars, this awful aggression does not repeat in the future," he added.

Zhovkva said Ukraine wanted to work with Putin and its neighbors to establish a system he called "the renewed security system of Europe."

One person was killed in airstrikes Friday morning near civilian structures in the central Ukrainian city of Dnipro, the State Emergency Service of Ukraine said in an official Telegram channel.

"On March 11 at about 6:10 a.m., there were three airstrikes in Novokodatsky District of Dnipro City, namely: a strike near a preschool and an apartment building, as well as a strike that hit a two-story shoe factory and caused fire," the service said.

Earlier this week, a Ukrainian official said Russia is mounting resources to "encircle" Dnipro, adding that Russia’s plan was to "encircle the major cities, exsanguinate the Ukrainian Armed Forces and create a situation of humanitarian catastrophe for civilians."

The Russian assault on Ukraine is not just an unprovoked attack on a sovereign nation that is producing horrific destruction and civilian torment. It's also the biggest war of the modern misinformation era.

Russian President Vladimir Putin and his mouthpieces are weaving the most audacious and fatuous alternative reality surrounding any 21st-century conflict — one that renders current diplomatic efforts aimed at ending the war meaningless and futile.

Denying a Russian attack: On Thursday, for instance, Russian Foreign Minister Sergey Lavrov claimed with a straight face after talks with his Ukrainian counterpart in Turkey —  which, not surprisingly, failed — that Russia "did not attack Ukraine."

Not only was Lavrov's claim a lie, as the world knows, it was especially offensive since it came a day after a horrific Russian attack on a children's and maternity hospital in Ukraine that has been widely denounced as a war crime. And it coincided with unfounded claims from Moscow, which were even picked up by China in its efforts to boost Russian propaganda, that the United States had a bioweapons program in Ukraine, which officials in Washington fear could be laying a pretext for Russia's own use of chemical or biological weapons against civilians.

"Unfortunately, I can confirm that the Russian leadership, including Minister Lavrov, live in their own reality," Ukrainian Foreign Minister Dmytro Kuleba told CNBC on Thursday. "He told me looking in my eyes that the pictures of pregnant women being taken from under the rubble of the maternity house are fake."

Misinformation warfare: This has long been a weapon of the Russian state. Moscow spun multiple conspiracy theories about the shooting down of a Malaysian airliner over eastern Ukraine in 2014, apparently by a Russian missile system, for instance.

And Russian state media aired an interview in which two alleged spies blamed for using a nerve agent to poison a Russian defector in England in 2018 absurdly claimed they were in the country to visit a famed cathedral spire in the city of Salisbury.

But the misinformation offensive has hit a new peak in the war on Ukraine.

US Vice President Kamala Harris ventures farther toward NATO's eastern edge Friday with a stop in Romania, a country suddenly thrust into priority position for the United States as fighting rages over its border in Ukraine.

President Joe Biden has already dispatched 1,000 troops to Romania and pledged support for the country as it accommodates a major influx of migrants fleeing the war next door. But a visit by his No. 2 is meant to demonstrate American commitment at a deeply uncertain moment for the region.

Unlike Ukraine, Romania is a member of NATO and an attack on the country by Russia would trigger the alliance's collective defense treaty, which says an attack on one is an attack on all.

But even the protection of NATO, a system of alliance bases and a missile defense system can't entirely calm nerves in this former Soviet satellite state that's been invaded by Russia repeatedly over the course of its history.

Diplomatic test: Harris will meet Romanian President Klaus Iohannis on Friday before convening a news conference and returning to Washington.

Her trip has been a test both of her diplomatic abilities and the resolve of the broader Western allies to forcefully confront Russian President Vladimir Putin for launching the largest ground invasion in Europe since World War II.

Harris arrives in Bucharest from Poland, where she reinforced American commitment to another NATO ally that is watching warily for Putin's next move.

In a Twitter thread Thursday night, White House press secretary Jen Psaki addressed reports that Russia could seize the assets of Western companies that have suspended operations in the country.

The decision to withdraw or suspend services in Russia is "ultimately up to companies," Psaki said. "As President Biden said earlier this week, we welcome the decisions of companies to exit Russia because they want no part of Russia’s war of choice against Ukraine."

"Any lawless decision by Russia to seize the assets of these companies will ultimately result in even more economic pain for Russia. It will compound the clear message to the global business community that Russia is not a safe place to invest and do business," she added. "We stand with American companies who are making tough decisions regarding the future of their Russian operations."

Some context: Dozens of American, European and Japanese companies from almost every sector of the economy have abandoned joint ventures, factories, stores and offices in the past two weeks in response to Russia's invasion of Ukraine and the ensuring sanctions.

The sanctions have hit most of Russia's financial sector, including its central bank, trashed the Russian currency and are likely to trigger a sovereign debt default and deep recession. And there may be more to come.

"We need to act decisively with those [companies] who are going to close their production," Putin said according to a video posted by the Kremlin and aired on state media. "It is necessary, then ... to introduce external management and then transfer these enterprises to those who want to work," he added.

Kazakhstan’s Air Astana and Turkey’s Pegasus Airlines are suspending all flights to and from Russia.

Most of the Western world has now closed airspace to Russian aircraft, including the United States.

What's happening in Russia: Moscow has also banned flights for carriers from dozens of countries.

Aeroflot, Russia’s largest airline, has suspended all flights abroad — except to Minsk, Belarus — according to Russian state news agency RIA Novosti. It comes after the majority government-owned carrier’s ability to sell seats was crippled after being removed from the global distribution system.

I leave Moscow angry and sad.

It feels like a passage out of darkness to light, but left behind are friends trapped in one man's tunnel vision.

Over the past couple of months while I've been reporting from Moscow, I've met many people who have been horrified, shocked and numbed by Putin's wanton aggression. Some of them believed him when he said he wouldn't invade Ukraine. Some even knew players in the Kremlin inner circle and thought they understood the President's red lines, but now that trust is blown and they fear he has no limits at all.

What makes Putin's actions all the more galling is how he executed his plot in plain sight. Distracting with one hand, transfixing attention on diplomacy, even while insisting falsely that his massed troops were carrying out exercises on Ukraine's borders.

Ordinary Muscovites didn't even flinch as he perpetrated this betrayal by marching the nation to war on a cocktail of carefully stewed grievances.

Putin's empire: Putin spent years building a false narrative along with his empire. The wishes that he was denied, such as NATO withdrawing to 1997 lines or barring Ukraine from membership, was the West's fault, he claimed.

But if Putin did believe Russia's security was threatened, and that the modern Western world was pitted against him, the truth was that he never adjusted to the changing dynamics of the 21st century.

This year, while I have been in Moscow covering the buildup and outbreak of war in neighboring Ukraine, it became painfully clear to me that, just as the Nazis did in Germany during the 1930s and 40s, Putin has had laws made to his order. And like many a strongman before him, the Russian President is ruthlessly unleashing the compliant and complicit state apparatus that he himself built, to obediently enforce them.

In short, his every wish is readily executed.

Within 24 hours of reading a news story about Ukrainian refugees sleeping in a train station, Aaron Jackson left his Florida home for an area near the border between Poland and Ukraine.

Right away, he got to work helping refugees secure emergency housing.

Jackson is a 2007 CNN Hero and the founder of Planting Peace, a humanitarian and environmental non-profit

While walking through a packed refugee center near the Krakovets border crossing, Jackson spotted a little girl playing with a toy. Speaking through a translator, he learned her parents were originally from Congo and had lived in Ukraine for the last 12 years.

The father, Donatien Tshikele Mubabinge, said that when Russian bombs fell too close to their home, he, his wife, Ngalula, and their 2-year-old daughter, Tushike, left everything behind, including their savings. They tried taking a taxi to the border, but when traffic got too backed up, he says they had to walk nearly 40 miles (about 60 km), much of it with Tushike on his back.

After learning of their ordeal, Jackson booked a hotel room for the family and began searching for more permanent housing.

"It's horrible why they're leaving, but it's inspiring at the same time — to see the human will and the human spirit and what they're willing to do to save their own lives and the life of their child," Jackson said. 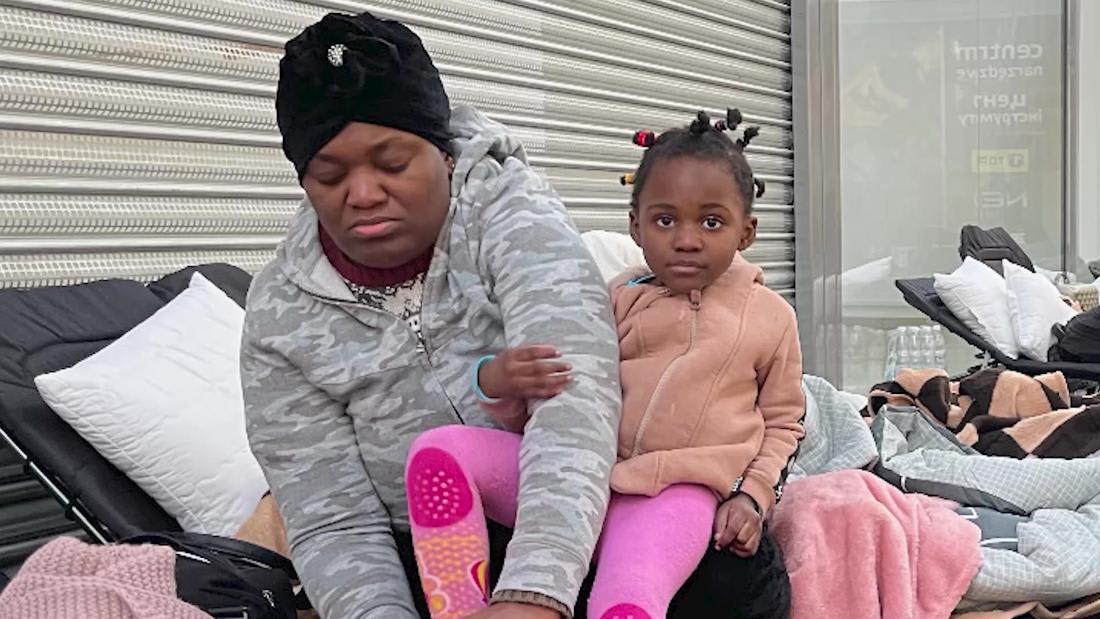 They fled their house in Ukraine, but a CNN Hero helped make Poland their new home

Meanwhile, Russia and China are pushing a conspiracy theory about an alleged American bioweapons lab in Ukraine, and President Joe Biden is expected to announce Friday that the US will revoke "most favored nation" status for Russia.