New video from Ukraine's Azov Battalion shows destruction of buildings including an apartment complex in the southeastern city of Mariupol, as thick plumes of smoke rise in the distance.

The Azov Battalion started as a volunteer militia linked to far-right ideologies before it was incorporated into a Ukrainian National Guard unit in 2014.

CNN has geolocated and verified the authenticity of the video. It's unclear when it was filmed, but the clip was uploaded Monday to the battalion's Telegram channel.

The ultimate product of intense firefights between Ukrainian and Russian forces is clear in the video: widespread destruction.

The drone taking the video begins its flight in an industrial area in western Mariupol and moves northward toward the Epicenter K shopping center. It flies over an already destroyed apartment complex and then suddenly a large explosion is seen.

The fire-gutted remains of the Epicenter K supermarket is also seen.

The video cuts and the drone is several hundred feet further to the north near a mattress store and apartment complex.

A fire is raging in the apartment complex and toward central Mariupol and more dark plumes of smoke are seen rising.

China's top diplomat, Yang Jiechi, told Washington on Monday that Beijing regrets the war in Ukraine but will not stand for any attempts to "smear" China over its position, according to a readout from the Chinese side.

Yang met with US National Security Adviser Jake Sullivan in Rome Monday amid the ongoing Russian invasion of Ukraine.

The US has information suggesting China has expressed some openness to providing Russia with requested military and financial assistance as part of its war on Ukraine, a Western official and a US diplomat told CNN.

China has dismissed that as US “disinformation.”

“China always calls for respecting the sovereignty and territorial integrity of all countries and abides by the United Nations Charter and principles,” Yang told Sullivan, adding that Beijing will continue to promote peace talks and has provided “emergency humanitarian aid” to Ukraine.

Yang also said it is important to “straighten out the historical context of the Ukraine issue, get to the bottom of the problem's origin, and respond to the legitimate concerns of all parties.”

Ukrainian President Volodymyr Zelensky has shared a letter he wrote to the family of American journalist Brent Renaud, who was killed in Ukraine.

“It is with deep sadness that I am writing to extend my heartfelt condolences to you on the tragic loss of your beloved son and brother, Brent Renaud.” Zelensky said in a copy of a letter addressed to Renaud’s family posted on Twitter.
“With all his courage and determination, he traveled to the most dangerous war zones to film the unprecedented ruthlessness and evil, also inflicted upon our nation by the aggressor state.”

Award-winning reporter Renaud was killed by Russian forces in the Ukrainian city of Irpin, police in Kyiv said in social media posts Sunday.

CNN has not independently verified the account given by police.

Another American journalist, Juan Arredondo, was wounded. Time magazine told CNN that Renaud was in Ukraine in recent weeks to work on "a Time Studios project focused on the global refugee crisis."

On Monday, Russia’s Ambassador to the United Nations said at the UN Security Council, without providing evidence, that Renaud died at the hands of Ukrainian forces in Irpin — not Russian forces.

The Ukrainian military has conducted an artillery strike on a Russian military position in the outskirts of Kyiv, new video published Monday shows.

The video was taken by a drone and shows the Russian military position in a forest.

The Ukrainian military did not say where the video was filmed but CNN has geolocated the clip to a grove of trees just east of the village of Ozera, northwest of Kyiv.

It's unclear when the barrage occurred but NASA satellite sensory data from the Fire Information for Resource Management System indicates that several explosions took place around the area on March 11.

As the camera zooms out, the artillery barrage is seen hitting the grove of trees. The village of Ozera and the northern end of the runway at Antonov Air Base is visible.

The villages of Ozera and Moschun — 2 miles (3 kilometers) east across the Irpin River — have been significantly damaged by military strikes.

Ukraine's President Volodymyr Zelensky said the world sees what Russia is doing in Ukrainian cities and its military has "responsibility for war crimes."

Russia, he said, will have to answer for disrupting evacuation corridors and for its actions in "Mariupol. Kharkiv. Chernihiv. Sumy. Okhtyrka. Hostomel. Irpin. In all our cities."

Evacuations: Zelensky said 3,806 Ukrainians were evacuated from Kyiv and Luhansk regions on Monday.

Aid convoy: But a humanitarian convoy bringing desperately-needed aid to the besieged city of Mariupol was blocked.

"Our convoy with 100 tons of what is most necessary for Mariupol is still kept in Berdyansk. For three days already. But we will try. We will do everything to ensure that Mariupol residents receive food, water, and medicine," he said.

New sanctions: Zelensky said Ukraine is working with “partners” on new restrictions that will be applied against the Russian state.

Talks: The President said negotiations are continuing with Russia after a fourth round of talks concluded Monday.

“Our delegation also worked on this in negotiations with the Russian party. Pretty good, as I was told. But let's see. They will continue tomorrow," he said.

On Monday, Ukrainian negotiator Mykhailo Podoliak said on Twitter there was a "technical pause" in talks but they would continue Tuesday.

The pause was "for additional work in the working subgroups and clarification of individual definitions. Negotiations continue," he said.

The thunder of explosions occasionally rattles the basement that has become the temporary home to 21 babies of foreign parents born to Ukrainian surrogates.

The BioTexCom Center for Human Reproduction surrogacy center in Kyiv was moved to the concrete bunker on the first day of the Russian invasion nearly three weeks ago, to protect the babies from any incoming fire.

But located just over 9 miles (14 kilometers) from Irpin, a suburb that has been a target of a Russian onslaught, it is still far from safe — making it difficult for the new parents, who are in countries such as Canada, Italy and China, to collect the babies.

On Monday morning, a 30-year-old surrogate arrived at the makeshift clinic with the baby boy she delivered in hospital a week earlier. She was unable to hold back her tears as she handed baby Laurence over to the staff.

"It is even harder that he is in a place where there is shelling," said the surrogate, who only wanted to use her first name, Victoria. "And when will his parents get to take him away because of it? It's really hard."

Baby Laurence's biological parents, who provided both the sperm and the egg for the pregnancy, live abroad. But it's unclear when they will be able to collect their son. 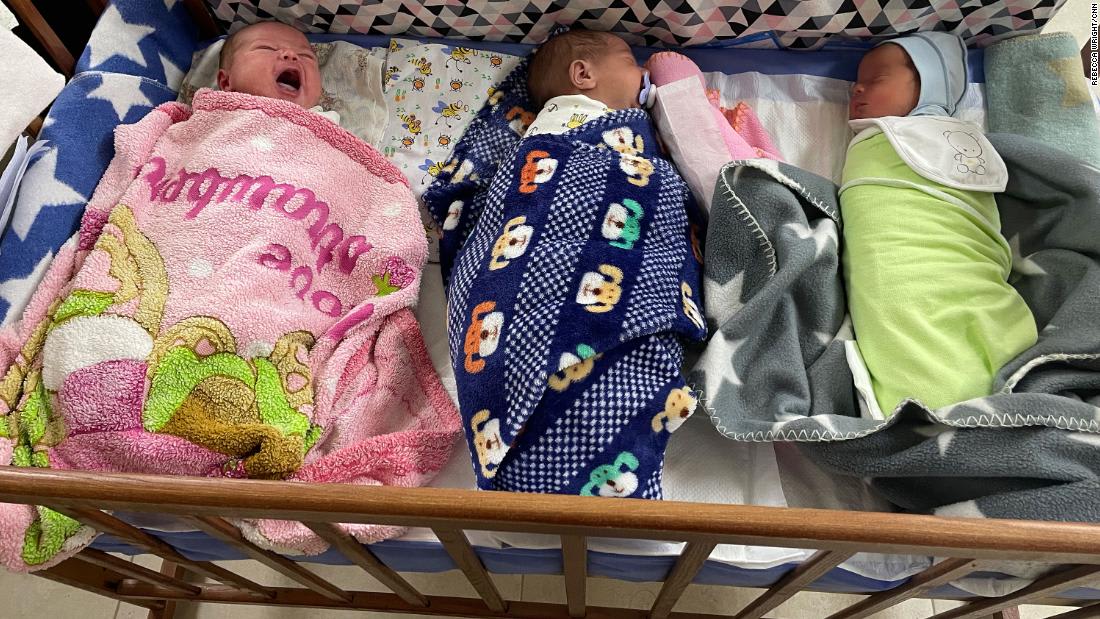 Underneath embattled Kyiv, babies born to foreign parents via surrogate shelter in a basement

"Russian conscripts! Listen to me very carefully. Russian officers! You’ve already understood everything. You will not take anything from Ukraine. You will take lives. There are a lot of you. But your life will also be taken," the President said.
“But why should you die? What for? I know that you want to survive."

"We hear what you really think about this senseless war, about this disgrace, and about your state. Your conversations with each other. Your calls home to your family. We hear it all. We draw conclusions. We know who you are," he said.

The Ukrainian President also offered Russian soldiers what he said was, “a choice” and “a chance."

"On behalf of the Ukrainian people, I give you a chance. Chance to survive. If you surrender to our forces, we will treat you the way people are supposed to be treated. As people, decently. In a way, you were not treated in your army. And in a way, your army does not treat ours. Choose!" Zelensky said.

Without offering evidence, Zelensky claimed Russia had lost 80 warplanes and "soon the number of downed helicopters of Russia will reach hundreds of units."

Zelensky said abandoned Russian equipment was "one of the suppliers of equipment to our army."

The leaders of NATO could meet in person in Brussels as soon as next week for what would be an extraordinary meeting amid Russia's invasion of Ukraine, according to a diplomatic source familiar with the planning.

Multiple US officials have confirmed that US President Joe Biden is preparing to possibly travel to Europe next week, though his trip has not been finalized, nor has the NATO leaders summit.

But the session is currently under discussion as NATO attempts to curb Russian President Vladimir Putin's brutal invasion of Ukraine.

Ukrainian President Volodymyr Zelensky said he’s “grateful” to Russians who “are not afraid to protest” and who “tell the truth” about Russia’s invasion of Ukraine.

“I am grateful to those Russians who do not stop trying to convey the truth. To those who fight disinformation and tell the truth, real facts to their friends and loved ones," he said in a Telegram video uploaded early Tuesday local time.

Zelensky also spoke directly about Maria Ovsyannikova, the Russia Channel One employee who held an anti-war sign, to interrupt one of Russia's major state television broadcast news programs in prime time on Monday.

"NO WAR. Stop the war. Do not believe propaganda they tell you lies here," the sign read. "Russians against war," the last line of the sign said in English.

“And personally to the woman who entered the studio of Channel One with a poster against the war,” he said.
“To those who are not afraid to protest. As long as your country has not completely closed itself off from the whole world, turning into a very large North Korea, you must fight. You must not lose your chance.”

Ovsyannikova's lawyer, Dmitry Zakhvatov, told CNN earlier that he is unable to find his client, despite reports she is in Moscow's Ostankino Police station.