A large black plume of smoke is seen rising from the airport in the satellite image, with a number of helicopters on fire.

Military vehicles seen near the airport have also been hit.

Another image, taken by a drone hovering above the nearby village of Komyshany, also shows the large plume of smoke rising from the airport.

CNN has geolocated and verified the authenticity of the image.

The military strike at the airport was picked up by NASA's Fire Information for Resource Management System (FIRMS), which tracks large fires around the world.

According to the sensory data collected by FIRMS, the military strike occurred around 1:42 p.m. local time.

On Monday, satellite images from Maxar Technologies showed a number of Russian military helicopters on the tarmac at Kherson's International Airport. Dozens of military vehicles are also seen in the surrounding area.

The Prime Ministers of Poland, Slovenia and the Czech Republic reaffirmed their support for Ukraine amid the ongoing Russian invasion during a meeting Tuesday with Ukrainian President Volodymyr Zelensky and Prime Minister Denys Shmyhal in the capital, Kyiv.

"We are here to admire your fight against such a cruel aggressor. This invasion has to stop," Morawiecki said. "Those who are killed by (Russian President Vladimir) Putin, they can never be forgotten. They are not forgotten."

He also emphasized Poland, which shares a 310-mile (500-kilometer) border with Ukraine, would try to help Ukraine organize its defenses.

"We will never leave you alone. We will be with you. Because we know you are fighting not only for your homes, for your freedom, for your security, but also for ours," he said.

Czech Prime Minister Petr Fiala said having an in-person discussion with Zelensky was "something really special."

"The main goal of our visit and the main message of our mission is to say to our Ukrainian friends that they are not alone, that Europe stands with you," Fiala said.

Fiala said he wanted to assure Ukrainians we are "hosting your wives and children" and providing them with "refuge" in the Czech Republic.

The Czech Republic has now taken in 250,000 refugees, according to the prime minister, who said they will "continue to provide more aid and support."

Zelensky thanked the EU leaders for their "wonderful support" when "so many other ambassadors have left Ukraine because of the full-scale Russian invasion."

"Most important, is that we truly trust these leaders," Zelensky said. "When we are talking about the security guarantees, about our future in the European Union, or when we talk about the sanctions policy, we are 100% assured that whatever we are discussing, whatever we talk about, this will reach a positive outcome for our country."
He continued that with "friends like this," Ukraine "can win." 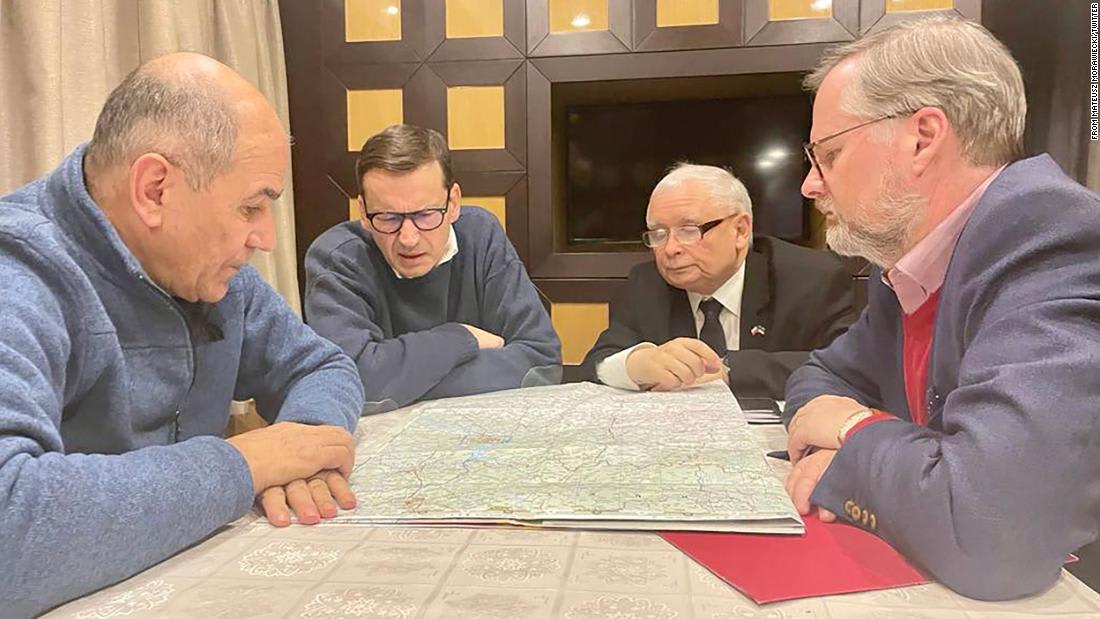 Conditions in Mariupol are "unbearable" and "just hell," residents who fled the besieged city in southeastern Ukraine have told CNN, as shocking drone footage and satellite photos emerged showing the utter devastation wrought by the Russian bombardment.

Mariupol city council said on Tuesday that an estimated 2,000 private cars have been able to leave the city, and a further 2,000 vehicles are parked on the main route out of Mariupol as of 2 p.m. local time Tuesday.

The departures took place despite the ongoing failure to formally establish safe corridors to evacuate civilians from Mariupol, which has been besieged since March 1.

As many as 2,500 civilians have died in Mariupol, Ukrainian officials estimate. About 350,000 people are trapped in the city, with officials warning those who remain are without electricity, water and heat.

Two women who managed to escape to the Zaporizhzhia region, about 140 miles (225 kilometers) away, on Monday told CNN about conditions in Mariupol and the frightening journey out.

Lidiia, who did not give her surname due to safety concerns, told CNN that she decided to leave Mariupol after Russian bombardments started hitting closer to her home.

"We left the city under shelling — there is no silence in Mariupol," the 34-year-old said. "Today we talked to our neighbors, they said that the situation now is even worse, so no one knows whether people will be able to leave Mariupol today."

She said she had spent two weeks in a basement with about 60 other people, adding she only left occasionally to retrieve items from her apartment.

Describing the journey out of the city, Lidiia said: "We stopped several times and hid the children because the airplane was flying very low directly above us. We were afraid that we would come under fire. But it was no longer possible to stay in the city. Mariupol is now just hell." 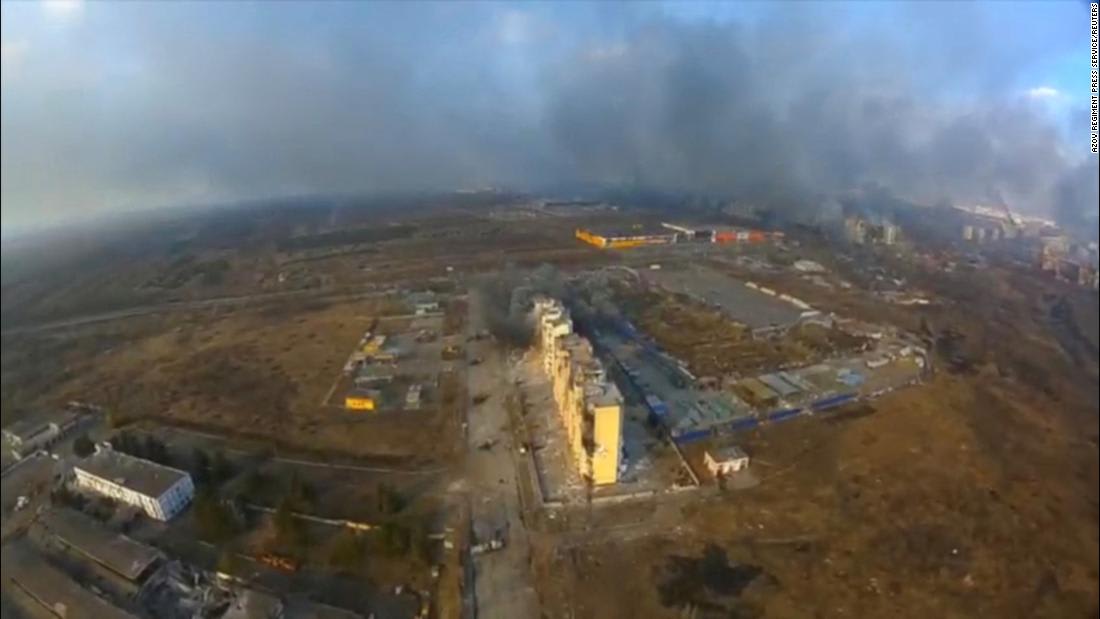