Slovakian Minister of Defence Jaroslav Nad’ said Slovakia is willing to provide S-300 air defense systems to Ukraine, and they are in discussions with the US and other allies on obtaining a “proper replacement, or… a capability guaranteed for a certain period of time.”

“We’re willing to do so immediately when we have a proper replacement,” Nad’ said at a joint news conference with US Defense Secretary Lloyd Austin. “The only strategic air defense system that we have in Slovakia is S-300 system. So what would happen immediately when we decide to give it to Ukrainians is that we actually create a gap, a security gap in NATO.”

Austin said that the US is continuing to work with allies on the issue, but he did not have any announcements to make related to providing Ukraine with the S-300 system.

CNN reported yesterday that Slovakia has preliminarily agreed to provide Ukraine with the key Soviet-era air defense system to help defend against Russian airstrikes, according to three sources familiar with the matter, but the US and NATO are still grappling with how to backfill that country’s own defensive capabilities and the transfer is not yet assured. According to two of the sources, Slovakia, one of three NATO allies that have the defense systems in question, wants assurances that the systems will be replaced immediately.

The push to get more S-300s into the hands of the Ukrainians comes as Congress has been pressing the Biden administration to help Ukraine obtain the air defense system. Lawmakers in both parties, who heard from Ukrainian President Volodymyr Zelensky in a speech Wednesday morning, have urged the US needed to do more to help Ukraine obtain the weapons it’s seeking, particularly after the administration opposed a plan last week to provide Ukraine with Polish MiG-29 jets.

At least 21 people have been killed and another 25 were wounded when Russian forces shelled the town of Merefa, about 25 kilometers (about 15 miles) southwest of Kharkiv, according to the regional prosecutor’s office.

The attack happened at 3:30 a.m. local time and destroyed a school and an arts club, the prosecutor’s office said. Ten of those injured are in a serious condition.

Civilian targets in Kharkiv, Ukraine's second-largest city, have been hit by shelling from Russia since the invasion began last month.

US Secretary of Defense Lloyd Austin stopped short of saying Russia was outright committing war crimes in a news conference with his Slovakian counterpart on Thursday.

Austin said recent “attacks” in Ukraine “appear to be focused directly on civilians,” and “if you attack civilians, purposely target civilians… that is a crime.”

Austin said Russia’s actions in Ukraine are “under review” by the US State Department.

“There’s a process that we’ll go through to review all of this, but we call upon Mr. Putin to cease these horrible actions; again, these are civilians not combatants and so they should not be targeted,” Austin said.

President Joe Biden yesterday called Russian President Vladimir Putin a "war criminal" in the harshest condemnation of Putin's actions from any US official since the war in Ukraine began three weeks ago.

Read more about war crimes and how Putin could be prosecuted here.

According to the non-governmental organization, it interviewed six witnesses and verified dozens of social media footage, residential areas were hit on March 7, 11, and 13.

The images show four dead bodies, HRW said, and remnants of the weapons used including Uragan and Smerch cluster munition rockets — stockpiled by both Russia and Ukraine — as well as remnants and unexploded 9N210 fragmentation submunitions. The attacks “might amount to war crimes,” HRW said.

Due to the widespread and indiscriminate damage they cause, cluster munitions are banned under international law. Neither Russia nor Ukraine are state parties to the treaties, however.

"Cluster munitions pose an immediate threat to civilians during conflict by randomly scattering submunitions or bomblets over a wide area. They continue to pose a threat post-conflict by leaving remnants, including submunitions that fail to explode upon impact becoming de facto landmines," according to HRW.

The report details civilian accounts which describe the alleged attacks. HRW says they geolocated one image shared by a witness that places an attack in the Inhulsky neighborhood on March 11 around 1.7 kilometers (about 1 mile) from a factory which produces gas-turbines for defense technology and vessels.

“The factory may have been identified as a potential military target, but the significant distance between the factory and the civilian objects damaged also suggests the attacks were indiscriminate,” they report.

US Defense Secretary Lloyd Austin again reiterated that the United States will not enforce closing the skies in Ukraine, because "a no-fly zone means you're in a conflict with Russia."

"From a US perspective, our President, President Biden, has been clear that we would not have US forces fighting in Ukraine. Having said that, we'll do everything within our power to support Ukraine in their efforts to defend their territory," Austin said in Bratislava, Slovakia, after meeting with his Slovakian counterpart.

"So what this really means is that in order to control the skies, you have to shut down the air defenses there on the ground. And some of those air defense systems are in Russia and so, again, there's no easy or simple way to do this. There's no such thing as a no-fly zone light. A no-fly zone means you're in a conflict with Russia. So from a US perspective, we're, again, our position remains that we're not going to do that," he continued.

"So our goal has been to continue to reinforce those things that have worked for the Ukrainian forces," he said, adding the US is talking to allies to provide support.

In his address to the US Congress yesterday, Ukrainian President Volodymyr Zelensky expressed gratitude to Biden for aid the US has delivered so far, but he argued that more assistance is desperately needed. Zelensky specifically reiterated calls for the US to help enforce a no-fly zone in Ukraine to protect civilians.

Read more about NATO and what a no-fly zone means here.

Of all the surprises that Russian President Vladimir Putin has encountered since he invaded Ukraine last month, perhaps the biggest has been that Russia is yet to gain air superiority.

On paper, Russia's military prowess implies that along with quick ground victories, the Russian air force should have been able swiftly to take control of the skies. Going into the conflict, Russia's 1,391 aircraft to Ukraine's 132 —complemented by 948 helicopters to Kyiv's 55 — have yet to give Putin the kind of aerial dominance required to eliminate Ukraine's resistance. Russia's overall defense budget of $45.8 billion is almost 10 times that of its neighbor. 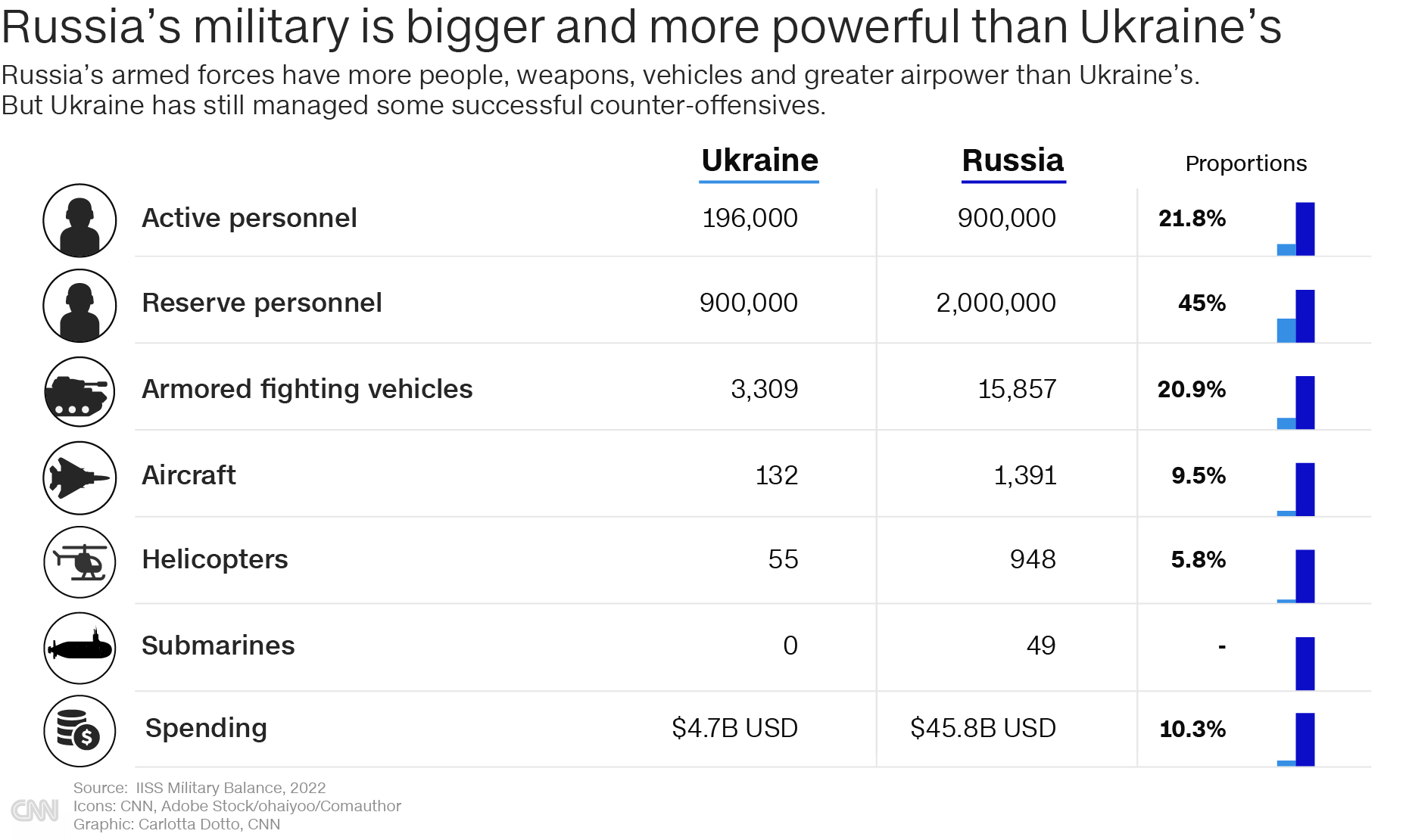 Experts ranging from former air force personnel to government officials believe that Russia's failure comes down to a combination of poor preparation by Moscow, a clever use of resources based on intelligence by Ukraine and the targeted donations of arms from Western allies to Ukraine.

"As far as I understand, they were able to save a large part of their air force by moving planes from airfields before the Russians destroyed them, based on intelligence ahead of attacks," said Gen. Riho Terras, a former commander of the Estonian Defense Forces.

Sophy Antrobus, research associate at Freeman Air and Space Institute and former officer in the UK's Royal Air Force, agrees that in the early stages of the war, Ukraine appeared to take intelligent steps that are now paying dividends.

"They've been clever in that they didn't deploy all of their resources that could take down Russian aircraft. This possibly led Russia into a false sense of security, and Ukraine has been able to keep defending its air while reinforcements from allies arrive," she said.

Those reinforcements include S-300 anti-aircraft systems, Stingers and Javelin missiles that have been used by Ukraine so far. The presence of such missile systems marks a dramatic upgrade for Ukraine.

Rep. Mike McCaul, the ranking member on the US House Foreign Affairs Committee told CNN that S-300s, which are Russian-made, have "higher-altitude" capability than Stinger missiles, which the US has also sent to Ukraine.

"The S-300s are the high-altitude — sort of like our Patriot battery of missiles — anti-aircraft system. The fact that they are in country and more are coming is going to be very effective." While these missile systems might be effective, there is still a question mark over how long Ukraine can hold off Russia — both in the air and on the ground.

Tata Marharian, a member of the Ukrainian Volunteer Medical Battalion in Kyiv, told CNN about her difficult experiences treating wounded children, adults and elderly people this past week.

She said she's treated a lot of people with brain damage from the shelling of cities.

The constant bombardment from Russian forces has taken a toll on her.

Marharian said she has tried to stay strong but that she has been demoralized.

"I don't know how much longer I can go with news of my friends and close ones being captured by Russians being wounded and dying, and it is very, very devastating," she said.

"I also can't even imagine the amount of money I have to spend on therapy once this all ends," she said in a pique of gallows humor. "I'm sorry for laughing, this is a silly thought that I have."

Marharian previously told CNN she moved from her hometown in the Donbas region to Kyiv in 2015 to study international law.

The European Space Agency announced Thursday it has suspended the Russian-European Mars mission over Russia’s invasion of Ukraine.

“We deeply deplore the human casualties and tragic consequences of the aggression towards Ukraine. While recognizing the impact on scientific exploration of space, ESA is fully aligned with the sanctions imposed on Russia by its Member States,” ESA said in a statement.

During its meeting in Paris, ESA’s ruling council “acknowledged the present impossibility of carrying out the ongoing cooperation with (Russia’s space agency) Roscosmos on the ExoMars rover mission with a launch in 2022, and mandated the ESA Director General to take appropriate steps to suspend the cooperation activities accordingly,” it said.

Despite suspending the Mars mission, ESA said that the International Space Station program “continues to operate nominally. The main goal is to continue safe operations of the ISS, including maintaining the safety of the crew.”

There are currently four NASA astronauts, two Russian cosmonauts and one European astronaut living and working on board the orbiting outpost.

In light of the situation in Ukraine, the agency’s director general will convene an extraordinary session of ESA’s ruling council in the coming weeks ”to submit specific proposals for decision by Member States,” according to the statement.

Canada is imposing new sanctions on Belarusian leadership in response to the country’s involvement in the Russian invasion of Ukraine, according to Canadian Minister of Foreign Affairs Mélanie Joly.

These new measures impose restrictions on 22 senior officials of Belarus’s Department of Defense who supported the attack on Ukraine by allowing Belarus to serve as a “launch pad” for the Russian invasion, a release from Global Affairs Canada said.

“The world is horrified to witness the senseless violence occurring in Ukraine. Just as Canada is imposing severe sanctions on the Russian regime, Belarusian leadership must also be held accountable for enabling and supporting Vladimir Putin’s unprovoked attacks,” Joy said. “Canada implores (Belarusian President) Alexander Lukashenko to end his support for the Russian invasion. We will not hesitate to take further action. The world is watching.”

According to the release, Canada has sanctioned more than 500 individuals and entities from Russia, Ukraine and Belarus since Russia’s invasion of Ukraine on Feb. 24.

Russian troops were stationed in Belarus — which borders Ukraine to the north — prior to the attack on Ukraine, which the two countries had claimed were for exercises. Using Belarus' border has been strategically advantageous to Russia because its border with Ukraine is much closer to Kyiv than Russia's, providing a shorter pathway for Russian troops to reach the Ukrainian capital.