Viktor Tereshchenko, mayor of the Velykoburlutska community in Ukraine's northeastern region of Kharkiv, has been released, according to a video message from Kharkiv Regional State Administration's head Oleh Syniehubov on Friday.

On Thursday, Syniehubov said Tereshchenko was "captured" by Russian forces.

"The enemy's released Viktor Tereshchenko. ... I've just spoken to him. He is at hospital receiving treatment. He is a good man who stands firm and sticks up for his community, his residents, his electorate. Once again this only proves that the enemy shall not prevail and no one will surrender an inch of our land to the enemy," Syniehubov said in the Friday statement.

He said that Russian forces did not allow the delivery of aid along the evacuation corridors, so local officials set up logistical aid centers in nearby towns that needed it most.

On Tuesday, the mayor of Melitopol, Ivan Fedorov, who had been detained by Russian forces, was freed as part of a prisoner swap. On Sunday Yevhen Matveyev, the leader of Dniprorudne, a small city north of Melitopol, was abducted by Russian troops, according to Ukraine's Foreign Minister Dmytro Kuleba.

CNN could not independently confirm the claim.

Former US Presidents George W. Bush and Bill Clinton visited a Ukrainian church in Chicago to “show solidarity with the people of Ukraine.”

The presidents both tweeted video of their visit to Saints Volodymyr & Olha Ukrainian Catholic Church, each carrying bouquets of bright yellow sunflowers, the national flower of Ukraine.

“America stands united with the people of Ukraine in their fight for freedom and against oppression,” Clinton tweeted.

“America stands in solidarity with the people of Ukraine as they fight for their freedom and their future,” according to a tweet from The George W. Bush Presidential Center.

"We need you right now," Zelensky told US members of Congress in one of his latest pleas for assistance before a friendly government.

The US and other NATO member nations have fulfilled a number of Zelensky's requests, while stopping short of certain measures they say could risk an escalation in the war.

Switchblade drones: Small, portable, so-called kamikaze drones that carry warheads and detonate on impact. The smallest model can hit a target up to six miles away, according to the company that produces the drones, AeroVironment. It's unclear which size model the US will send to Ukraine.

Javelin anti-tank weapons: This guided missile system can be shoulder-fired by a single solider and has a range of up to 8,200 feet.

AT-4 anti-armor systems: These Swedish anti-armor weapons are "lightweight, single-shot and fully disposable," according to the company that produces them, Saab Bofors Dynamics.

The battery includes missiles and launching stations, a radar set that detects and tracks targets, and an engagement control station, according to the Missile Defense Advocacy Alliance. 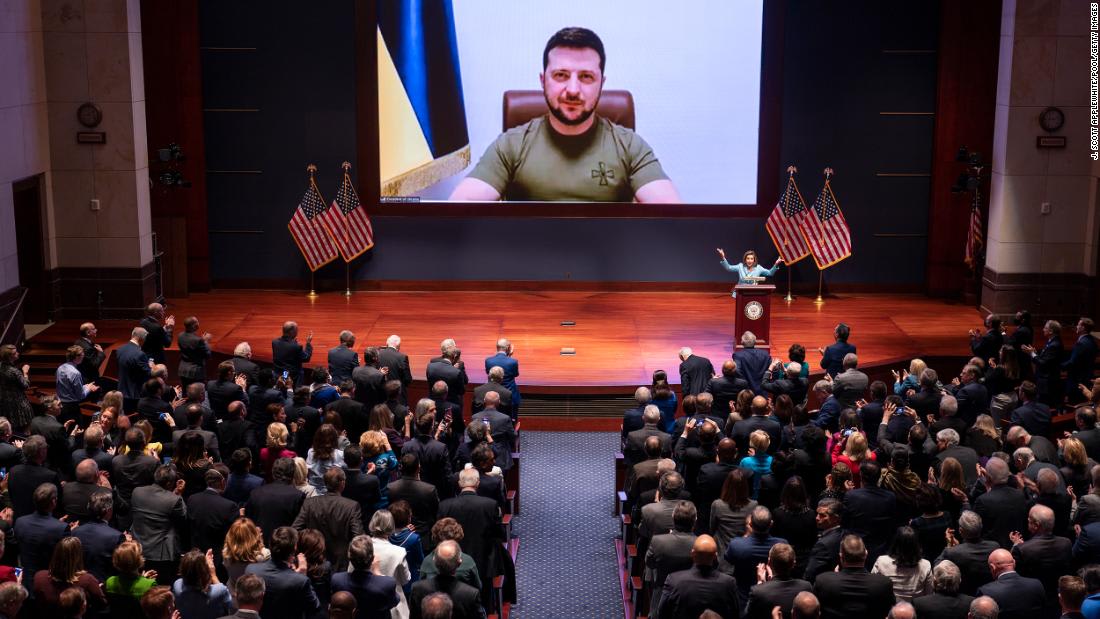 A US Army veteran is in western Ukraine teaching first-aid classes to Ukrainian civilians, in case they need to treat wounds during the war with Russia.

Dr. Robert Lim is among the medics and doctors that the Global Surgical and Medical Support Group is bringing to Ukraine.

Lim, who was an Army surgeon for 20 years, headed up a training at a local gym in Lviv, where he instructed teachers, engineers, dancers and even high school students how to use tourniquets and keep an injured person breathing.

"I'm afraid, because we are not prepared. I am not a professional soldier, but I understand it is better to meet the enemy being prepared and with the right skills," civil engineer Marian Pakholok told CNN's Scott McLean.

Lim also taught other doctors and medical professionals how to treat wounds rarely seen during peacetime.

Dr. Tania Boychuk, a dermatologist, told McLean she is planning on joining the military.

"I plan to go to the war front," she said, adding that she has close friends who are there as well.

The United Nations announced Friday that alongside its partners in Ukraine it completed the first convoy of humanitarian aid to the city of Sumy, which is located in the northeast of the country.

"The 130 metric tons of essential aid includes medical supplies, bottled water, ready-to-eat meals and canned food that will directly help some 35,000 people. In addition to these items, the convoy brought equipment to repair water systems to help 50,000 people," UN Crisis Coordinator for Ukraine Amin Awad said in a statement Friday. "The UN Office for the Coordination of Humanitarian Affairs (OCHA) facilitated the dialogue for the safe passage of the humanitarian convoy."

Supplies were provided by the World Food Programme, UN Refugee Agency, World Health Organization, and the UN Children’s Fund, as well as the nongovernmental organization People in Need, according to the statement.

"We count on the continued cooperation of all parties as the United Nations and our humanitarian partners scale up our relief operation to respond to the grave humanitarian crisis caused by this war. We are here to help the most vulnerable civilians caught in the fighting, wherever they are in Ukraine. We need unhindered and sustained humanitarian access to do so," Awad added.

Continuing to face attacks from Russian forces, Ukrainian hospitals are strained by growing numbers of casualties and finite medical supplies. There are shortages across all types of medication, but limited access to insulin supplies has led to an uptick in conditions related to uncontrolled diabetes.

"There's been significant shortages of insulin across the country and many, many actors and people in different areas calling out for that supply," Kate White, an emergency program manager for Doctors Without Borders, told CNN.

According to Valentina Ocheretenko, chair of the Ukrainian Diabetes Foundation, the country has enough insulin to supply its needs for three months. The challenge is getting it to the people who need it.

There are over 2.3 million people with diabetes in Ukraine, according to the International Diabetes Federation, making up 7.1% of the population. For some people with type 1 diabetes, immediate access to insulin is a necessity for survival.

"We have enough insulin in the country, and a lot of humanitarian aid ... is bringing more and more, but we have big problems with logistics," Ocheretenko told CNN.

Most of Ukraine's insulin supply is imported or made domestically by two pharmaceutical manufacturing companies, Indar and Farmak, both of which are in Kyiv, said Dr. Orest Petrychka, medical director of the Clinical Center of Endocrinology Lviv. Insulin is provided to people who need it for free in Ukraine.

"About the patients in the conflict zones, I am afraid they can be cut off from the supply of insulin ... because of actions of targeted terror held by Russian troops or by the physical impossibility to supply this insulin to patients ... from the pharmacy," Petrychka told CNN. 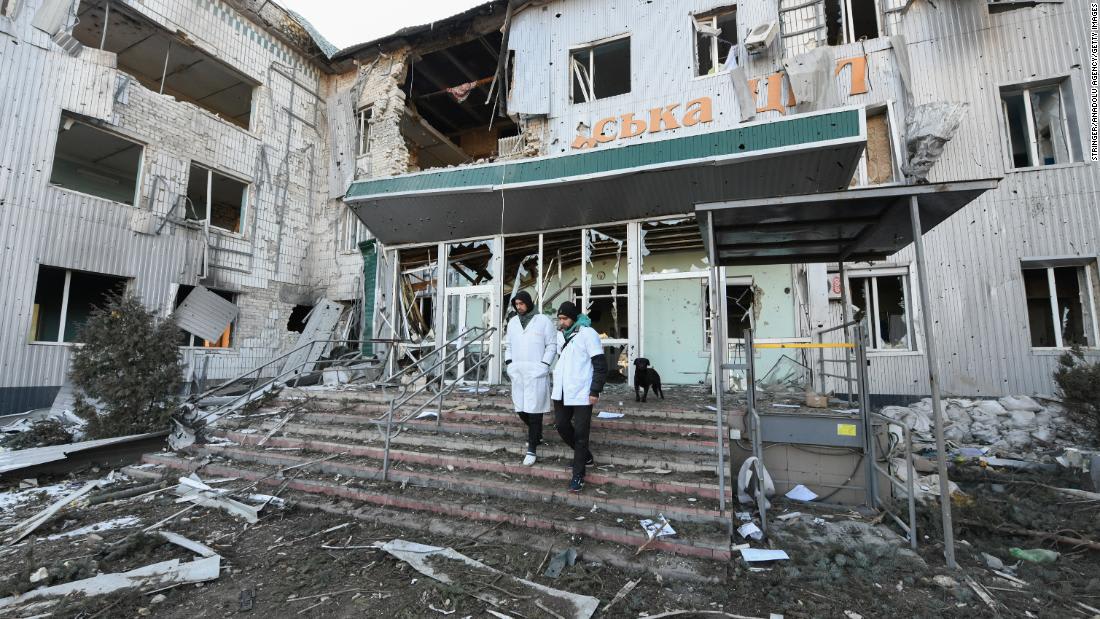 With Ukraine's conflict zone cut off from insulin supplies, concerns escalate for people with diabetes

The Russian military is quite literally digging in, constructing earthen berms around its military equipment northwest of the Ukrainian capital of Kyiv, according to Maxar Technologies' analysis and satellite images.

The new satellite images show the protective berms around Russian military equipment near Ozera and the Antonov Air Base.

Additional Russian military equipment, and some berm construction, are also seen in the villages of Zdvyzhivka and Berestyanka, further northwest.

The White House downplayed threats made by Russian Foreign Minister Sergey Lavrov against material assistance coming into Ukraine after US President Joe Biden pledged to send more than $800 million in security assistance. On Friday, Lavrov said any weapons shipments entering Ukraine will be a “legitimate” target for Russia.

“That's a threat that he has made before,” White House press secretary Jen Psaki told CNN’s Kaitlan Collins during a press briefing Friday, adding that “there are no US troops operating inside Ukraine,” with all US forces operating exclusively in NATO territory.

As CNN previously reported, Lavrov reportedly said the Russians had “made it very clear that any cargo that will enter the territory of Ukraine, which we will consider ... [carrying] weapons, will become a legitimate target," according to state TV channel RT. A number of NATO countries, including the US, have pledged military aid to Ukraine ranging from drones to anti-tank missiles.

But Psaki added that some of the convoys were also bringing humanitarian assistance.

“We continue to have the means of getting that assistance in and we have effectively been doing that in recent days,” she added, “so we will continue to work through those channels.”

As Friday ends in Ukraine, here's a look at the latest developments that have happened so far in the war.

Hundreds likely still under rubble: Ukrainian President Volodymyr Zelensky said on Friday that 130 people have been rescued from the bombed theater in the city of Mariupol so far. Hundreds of people were taking shelter at the theater when it was bombed on Wednesday. Speaking on Ukrainian TV, Zelensky said that rescue operations are continuing at the site despite the difficulties. However, hundreds of people are still under the rubble in Mariupol, Zelensky added.

Impacted areas: Lviv, Kramatorsk and a district in Kyiv were hit by Russian weapons, according to Ukrainian authorities. But the Ukrainian army offered a rosy assessment of Russian advancement on Kyiv, saying Russia’s two main routes for attacking the capital city have been blocked. US Defense Secretary Lloyd Austin also said on Friday that the US has "seen a number of missteps" by Russia in its invasion of Ukraine.

Meanwhile, French President Emmanuel Macron on Friday told Russian President Vladimir Putin that he was concerned about the situation in Mariupol, the Ukrainian city that has been hit by constant shelling over recent days, according to the Elysée Palace. 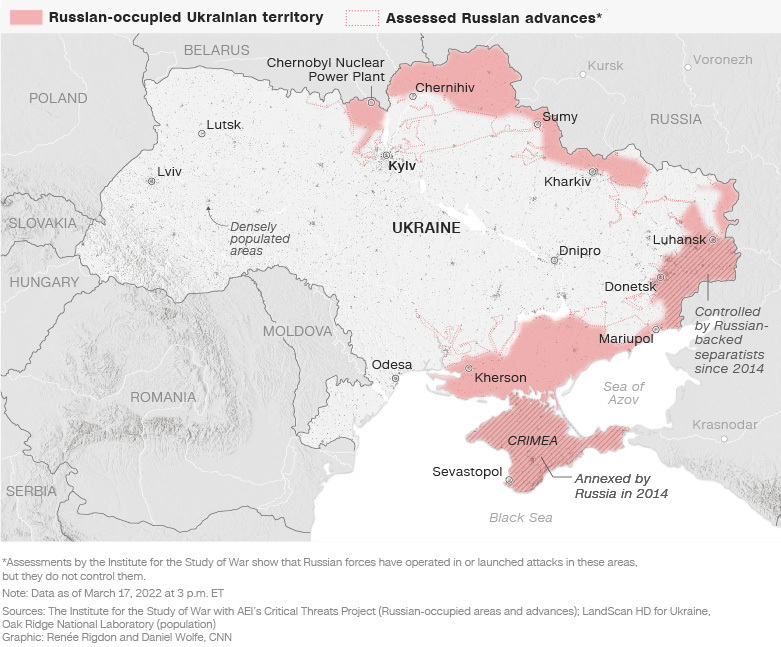 Evacuations: Nine corridors to evacuate civilians from towns and cities badly hit by Russian attacks had been agreed for Friday, according to the Ukrainian government. For the second day running, one of the agreed corridors links the besieged southeastern city of Mariupol to Zaporizhzhia, which remains under Ukrainian control.

New satellite images from Maxar Technologies are showing more areas in Mariupol have been destroyed from intense firefights between Russian and Ukrainian militaries. Just southwest of Mariupol, a line of cars — residents evacuated from the city — was seen traveling along the highway toward Berdyansk.

Deaths mount: The United Nations estimates that over 800 Ukrainian civilians have lost their lives since the Feb. 24 Russian invasion began, but "believes that the actual figures are considerably higher."

Biden and Xi speak: US President Joe Biden told CNN that his call with Chinese President Xi Jinping Friday "went well." According to the White House, Biden "described the implications and consequences if China provides material support to Russia" in a nearly two-hour phone call with China's leader.