Russia continues to make "incremental gains" in Ukraine's south and has used "brutal, savage techniques'' in the way it has targeted civilians, US Secretary of Defense Lloyd Austin said Saturday.

"In terms of Russians' progress in the south, I would say that they continue to make incremental gains. I would also say that they've used some brutal, savage techniques in terms of the way that they've been targeting civilian populations," Austin said during a joint press conference with Bulgaria's Prime Minister Kiril Petkov in Sofia.

"And again, we would hope that they [Russia] would choose a different path," Austin added. The amount of pain that the civilians have endured "has been hard to watch," he said.

Austin also said Europe faces its "largest security challenge in generations," and that Russian President Vladimir Putin’s "war of choice" against Ukraine has been "tragic."

"Russia’s aggression has galvanized the Ukrainian people, NATO, and the free world," Austin said. "Our commitment to Article 5 is ironclad."

"Improving Bulgaria’s military readiness and NATO interoperability is even more vital today," Austin said, adding "the United States will continue to stand strong with Bulgaria and our other NATO Allies."

Austin has traveled to Bulgaria and Slovakia this week as part of a trip to bolster NATO allies.

More context: Troops have made progress in the south of the country using tactics "ripped from the Syria playbook," Mason Clark, lead Russia analyst at the Institute for the Study of War, told CNN Friday evening.

Ukraine's President Volodymyr Zelensky has called for negotiations on peace "without delay" and warned that otherwise Russia's losses would be "huge."

Speaking on Saturday, Zelensky said that "negotiations on peace, on security for us, for Ukraine -- meaningful, fair and without delay -- are the only chance for Russia to reduce the damage from its own mistakes," in his latest video message.

"We have always insisted on negotiations. We have always offered dialogue, offered solutions for peace," he said. "And I want everyone to hear me now, especially in Moscow. It's time to meet. Time to talk. It is time to restore territorial integrity and justice for Ukraine."

"Otherwise, Russia's losses will be so huge, that several generations won't be enough to rebound," Zelensky added.

Russian President Vladimir Putin laid out his justification for the invasion of Ukraine at a rally in Moscow on Friday, where his speech was abruptly cut off on the state TV broadcast in what the Kremlin described as a technical error.

Tens of thousands of people waved the Russian flag at the national stadium as they took part in celebrations commemorating the eighth year of Russia's annexation of Crimea -- which is deemed illegal by the Ukrainian government and not recognized in the West.

Speaking from a stage in front of a banner that read, "For a world without Nazism," Putin said Russia "will definitely implement all our plans" in Ukraine.

Russia has so far been "surprised by the scale and ferocity" of Ukrainian resistance and has been "forced to change its operational approach," the UK Ministry of Defence said in its latest intelligence update on Saturday.

"The Kremlin has so far failed to achieve its original objectives" and "is now pursuing a strategy of attrition," the ministry said. "This is likely to involve the indiscriminate use of firepower resulting in increased civilian casualties, destruction of Ukrainian infrastructure, and intensify the humanitarian crisis."

Grip on media: Amid the invasion, Russian President Vladimir Putin has reinforced his control over the country's media, the ministry said. "The Kremlin is attempting to control the narrative, detract from operational problems and obscure high Russian casualty numbers from the Russian people," the ministry said.

More than 3 million Ukrainians have fled the country since Russia's invasion, with most going to neighboring Poland.

But only the smallest trickle — about 690 — have come to the United States as refugees since last October. That means essentially no Ukrainians of those 3 million who left since the war began have come to the US.

Why haven't more been allowed? It's a story of red tape and the broken immigration system, which the Biden administration, despite a desire to welcome refugees, has been unable to change.

"I will welcome the Ukrainian refugees," President Joe Biden said from the White House on March 11.

But it is not currently possible for American families to sponsor Ukrainian refugees. Multiple sources have told CNN the administration is discussing ways to help Ukrainian refugees join family members already living in the US.

That's something Poland's President has been pushing for; last week he asked Vice President Kamala Harris to speed up and simplify the procedures allowing Ukrainians with family in the US to come here.

It takes years to become a refugee in the US. The process takes so long because of the processing and screening time that's required — leaving limited, typically time-consuming options for Ukrainians seeking to enter the US.

But those caps are far below ones from the 1980s, when the US welcomed hundreds of thousands of refugees each year. 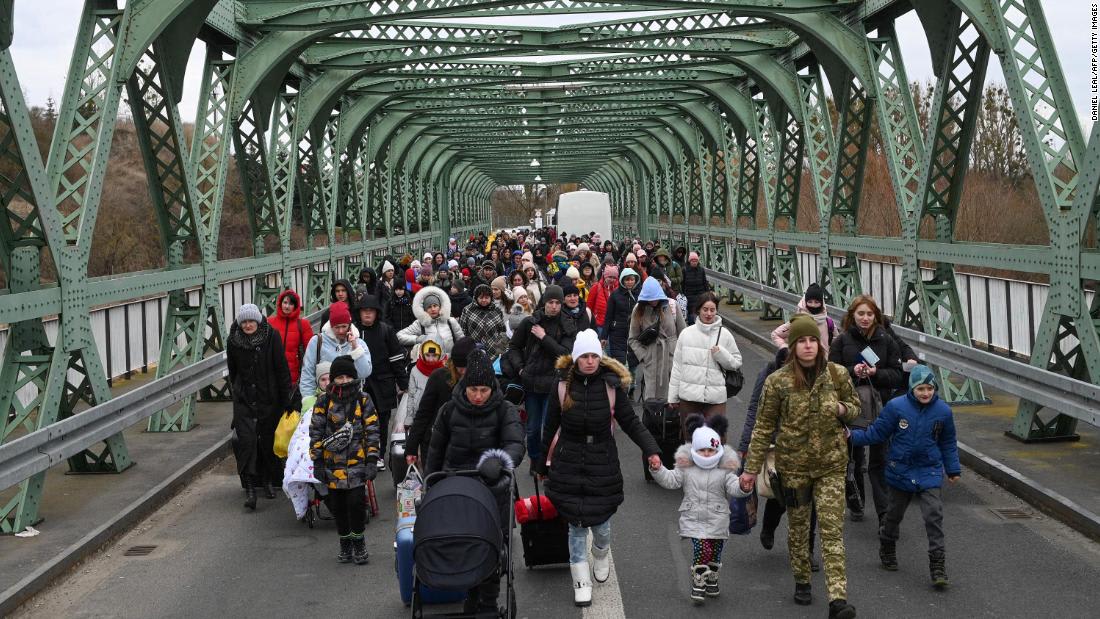 Analysis: Ukraine refugees: Why the US has allowed so few

A US military aircraft that appears to have crashed in northern Norway on Friday with four people aboard during NATO exercises has sustained "major damage," according to authorities in the country.

The MV-22B Osprey aircraft, assigned to the II Marine Expeditionary Force (MEF) US military unit, was on a training mission in Nordland County, northern Norway, on Friday, the Norwegian Armed Forces said.

On Saturday, Bent Arne Eilertsen, Nordland police chief of staff, told public broadcaster NRK: "The rescue helicopter has made observations and sees major damage to the aircraft.
"At 2:15 a.m. local time Saturday (9:15 p.m. Friday ET) ground crews approach the area where the aircraft is located.
"What we have been told is that it is an American plane with Americans on board."

He said the rescue operation is being carried out in darkness and bad weather, meaning police and rescue crews must "enter the area on land" and use snowmobiles to reach the scene.

As of 2 a.m. Saturday (9 p.m. Friday ET), the Norwegian police have not had any contact with the aircraft, according to police.

Norway's Safety Investigation Authority and National Criminal Investigation Service will arrive in Bodø, north of the Arctic Circle, on Saturday to start their investigation at the town's airport. Due to the poor weather, they will most likely make their way to the crash site on Sunday, according to NRK.

The US Marine Corps thanked Norwegian authorities for the rescue operation, saying in a statement: "We are grateful for their efforts and will help them with this search and rescue in all possible ways.”

When Russia launched its invasion of Ukraine, retired tennis pro Alexandr Dolgopolov was in Turkey — but was soon on his way home to his native Ukraine to join the war.

The former world No. 13 retired from the sport last year following a career that took him around the world. But he returned to Ukraine "because it's my home," he told CNN on Friday. "I've seen many sports people, singers, stay here and helping out — so why shouldn't I be here?"

Among the ranks of Ukrainian athletes fighting to defend their country are boxing champions Oleksandr Usyk and Vasiliy Lomachenko, and boxing legends the Klitschko brothers — Wladimir and Kyiv Mayor Vitali.

While preparing for the trip, Dolgopolov had doubts about whether he was ready to kill or die, he said. But once Russia began targeting civilian infrastructure, "it became the business of every Ukrainian," he said. "You can't just watch how they shoot your people."

That sentiment is strongly felt across Ukraine — which is why Russia is facing such strong resistance, he said. "You must understand that almost every man here is ready to take a weapon and fight. How do you fight such motivated people?"

Civilian casualties are growing as Russia continues its assault on several key cities in Ukraine. Here's what you need to know:

Norwegian rescue teams reported late Friday that "discoveries were made" in their search for a US military aircraft with four people aboard that went missing during NATO military exercises.

"At 9:27pm (4:27 p.m. ET), discoveries were made from the air in Gråtådalen in Beiarn," said a statement from the Norwegian Joint Rescue Coordination Center (JRCC). "Due to the weather conditions, it is impossible to land onsite. The weather conditions in the area have been challenging and are expected to get worse."

The MV-22B Osprey aircraft, assigned to the II Marine Expeditionary Force (MEF) US military unit in Norway, was "out on a training mission in Nordland County, northern Norway on Friday," according to the Norwegian Armed Forces.

According to the JRCC statement, the aircraft "was reported missing at 6:26pm (1:26 p.m. ET) south of Bodø. The aircraft was heading north towards Bodø. The last known position was by Saltfjellet."

Ground crews coordinated by the police have been deployed to the scene, but they are not expected to reach the area for several hours, JRCC said.