Ukrainian officials say that another Russian commander has died during fighting, which they say would be the fifth Russian general to have been killed since the invasion on February 24.

Gen. Oleg Mityaev, of Russia's 150th Motorized Rifle Division, and members of his unit were killed by Ukrainian forces near Mariupol last week, according to a Telegram post shared by Anton Gerashchenko, an adviser to Ukraine’s Interior Minister, on Tuesday.

The Russian Ministry of Defense nor Russian state media have issued any statements on his death.

Mityaev was part of a small group sent to Mariupol, Aleksei Arestovich, an adviser to the head of the president’s office, told Ukraine’s NV News.

He said Mityaev “most likely went to show, by example, how to fight. Because his soldiers refused to fight.

"Usually, the general is killed in close combat only if he personally comes to lead on the spot.”

The official Facebook page of the Strategic Communications Department of the Office of the Commander-in-Chief of the Armed Forces of Ukraine (AFU StratCom) also confirmed Mityaev’s death via a Facebook post.

In 2016, Mityaev was appointed commander of Russia’s 201st military base in Tajikistan, according to Russian state media.

The 201st military base is the largest Russian military facility located outside of its borders. Most recently, he was stationed as the deputy commander of the Russian military grouping at Hmeimim Air Base in Syria, according to Russian state media.

The Azov Battalion, an ultra-nationalist militia that has since been integrated into the Ukrainian armed forces, was the first to share a photo of the General’s body on their Telegram account.

US President Joe Biden and his fellow world leaders hope to finalize and unveil a package of new measures to punish Russia, help Ukraine and demonstrate Western unity at a string of emergency summits in Europe this week.

But aside from a dramatic wartime show of resolve, few observers believe anything the leaders can agree upon will be enough to end the bloodshed in Ukraine or dissuade Russian President Vladimir Putin from continuing his attacks that are increasingly harming civilians. 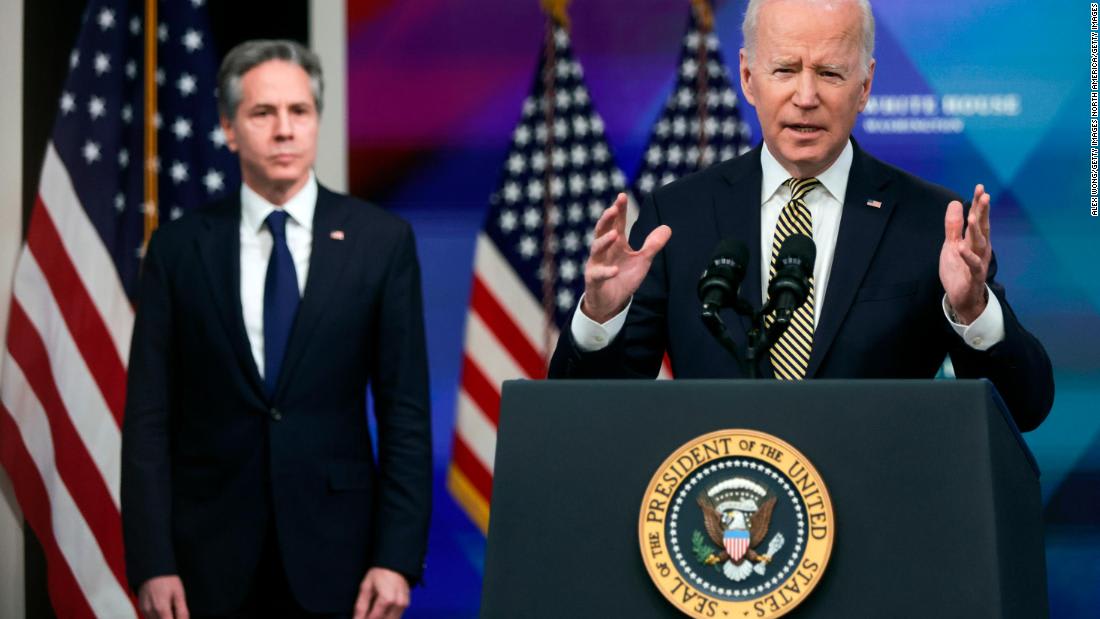 Two Harvard University students have created a website connecting thousands of Ukrainian refugees with hosts around the world offering them a safe haven from the fighting.

More than three million people have fled Ukraine since Russia began its invasion of Ukraine on February 24 and teenager Avi Schiffmann felt like he needed to help.

After coming face to face with hundreds of Ukrainian Americans at a pro-Ukraine demonstration in San Diego, the student contacted his classmate Marco Burstein and told him about his idea.

"They need assistance, immediately and on a really big scale, and I had to find a way to make that happen as soon as possible,” Schiffmann, 19, told CNN.

Ukraine Take Shelter launched on March 3 and, within a week, more than 4,000 people had created listings offering shelter to Ukrainian refugees.

The website design is simple. Refugees enter the nearest city where they hope to flee and go through available listings, each with its personalized description of the accommodation.

Finally, the refugee can click on the phone or email button to get the personal contact information of the listing holder.

"For me, I'm behind a computer across the world, which is what I'm good at, but it's very disconnected sometimes," Schiffmann said.
"To see so many people from countries in every corner of the world doing something to help these refugees, who need and deserve safety, is really inspiring." 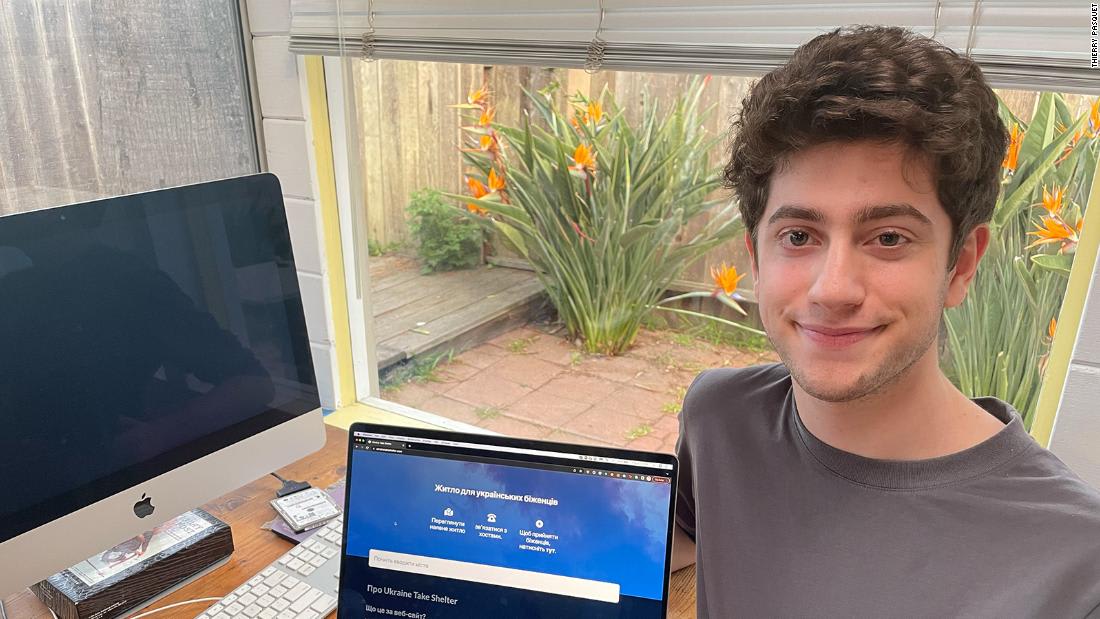 The Russian military claimed on Sunday that it had launched a series of strikes on military targets in Ukraine employing hypersonic and cruise missiles on Saturday night and Sunday morning.

Konashenkov said the missiles targeted what he described as a large storage base for fuels and lubricants of the Ukrainian armed forces near the settlement of Kostyantynivka, in Ukraine’s southern Mykolaiv region. Konashenkov claimed the location was used as a main supply and refueling base for Ukraine armored forces.

Separately, Konashenkov said sea-launched Kalibr cruise missiles were fired from the Black Sea and targeted a workshop for the repair of Ukrainian armored vehicles.

Konashenkov said air-launched precision missiles targeted what he described as a training center of the Ukrainian armed forces near the settlement of Ovruch, in Ukraine's northern Zhytomyr region. The Russian military claimed in that statement that dozens of Ukrainian special-operations forces and “foreign mercenaries” -- apparent shorthand for international volunteers heading for Ukraine -- had been killed. CNN could not immediately verify any of those claims.

US officials have also confirmed to CNN that Russia launched hypersonic missiles against Ukraine last week, the first known use of such missiles in combat.

The closure of Russian airspace to some international carriers, including many in Europe, has forced airlines to seek alternate routes. For some flights, such as those linking Europe and Southeast Asia, that's especially problematic since Russia, the world's largest country, stands directly in between.

The problem is best illustrated by Finnair's flight from Helsinki to Tokyo. Before the invasion of Ukraine, planes from Finland's national carrier would take off and quickly veer into the airspace of neighboring Russia, crossing it for over 3,000 miles.

They would then enter China near its northern border with Mongolia, fly in its airspace for about 1,000 miles, before entering Russia again just north of Vladivostok.

Finally, they'd cross the Sea of Japan and turn south towards Narita Airport. The journey would take just under nine hours on average and cover nearly 5,000 miles.

The last such flight departed on February 26. The next day, Russia barred Finland from using its airspace, forcing the temporary cancellation of most of Finnair's Asian destinations, including South Korea, Singapore and Thailand.

By that point, however, the airline's route planners had long been at work to find a solution. "We made the first very rough calculation about two weeks before the actual closure of the airspace," says Riku Kohvakka, manager of flight planning at Finnair.

The solution was to fly over the North Pole. 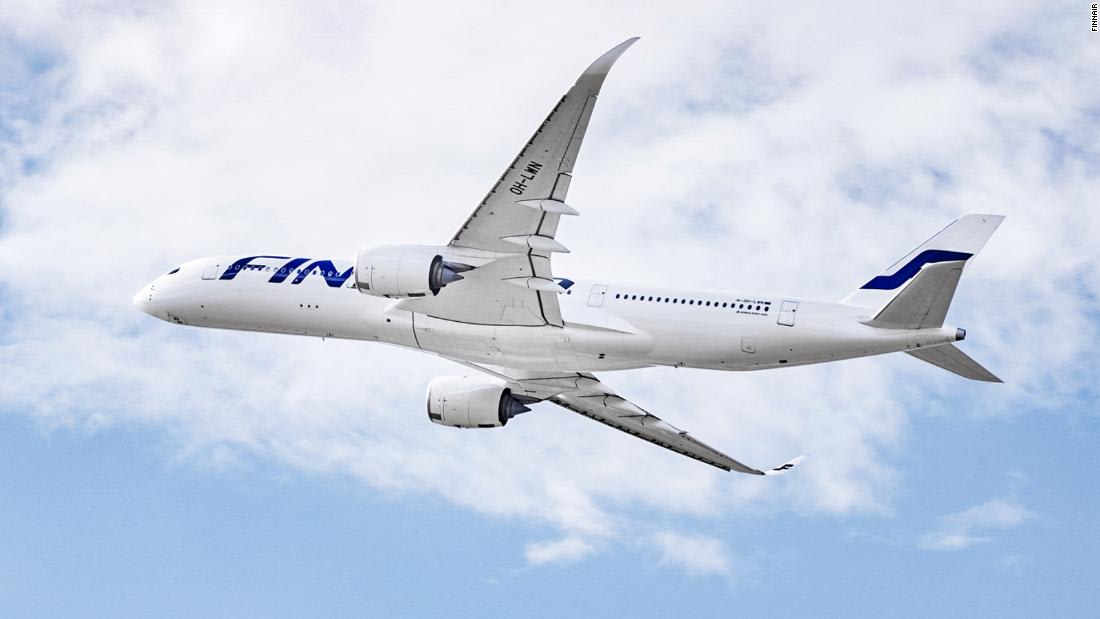 Polar express: How airlines are plotting a new route to Asia

An art school being used as a shelter in the besieged city of Mariupol has been bombed by Russian forces, according to Mariupol city council in a statement on its Telegram channel.

About 400 people were sheltering in the building, which was destroyed in the attack, the council said.

Information on casualties is still unclear but people remain trapped under the rubble.

It is still not clear how many people survived an attack on a theater in the city on Wednesday.

A satellite image released Saturday showed two thirds of the building – also being used as a shelter – had been completely destroyed. The theater was clearly marked with the word "children" in large Russian writing visible from the air. Estimates of how many people were inside at the time of the attack range from 800 to 1,300.

Russia will continue to use heavy firepower to support urban ground assaults, the UK Ministry of Defence said Sunday in its latest intelligence assessment.

In the past week, Russia increased its indiscriminate shelling of urban areas as its army made limited progress in capturing cities in eastern Ukraine, the assessment said.

“It is likely Russia will continue to use its heavy firepower to support assaults on urban areas as it looks to limit its own already considerable losses, at the cost of further civilian casualties,” the ministry said.

The indiscriminate shelling of residential areas has resulted in “widespread destruction and large numbers of civilian casualties,” the ministry added.

Australia on Sunday announced it will make a temporary humanitarian visa available to all Ukrainian temporary visa holders currently in Australia and those who arrive in the coming months.

The visa scheme will allow people to work and access government support including Medicare for three years, according to Minister of Immigration Alex Hawke.

The Australian government said it will work with the Ukrainian-Australian community to ensure appropriate permanent visa options are made available to this cohort "at an appropriate time."

Since Feb. 23, Australia has granted around 5,000 mostly temporary visas to Ukrainians, of which around 750 have arrived in the country.

The south eastern city of Mariupol has been under siege for several weeks, with residents facing a constant barrage of deadly unprovoked Russian attacks. These have included deadly strikes on a maternity ward and the bombing of a theater, the losses from which are still unknown as the rescue operation continues.

Here's what we know about the situation in the besieged city:

Constant bombardment: A Ukrainian army commander told CNN people in Mariupol risk their lives each time they emerge from underground bunkers, and claimed the strategic port is facing the most intense fighting anywhere in the country. Major Denis Prokopenko, from the National Guard Azov Regiment, said air and land attacks on the city were now almost relentless.

Bodies in the street: Prokopenko said people in the city were reluctant to leave their underground shelters even to get hold of essentials, meaning they were trying to drink less water and eat less food, only emerging to prepare hot meals. Basic services like gas, electricity and water, are all out in the city. Bodies are being left in the street because there is either no one left to collect them, or it is simply too dangerous to try.

Theater attack: A new satellite image shows the Mariupol theater, which was bombed several days ago, almost completely destroyed, with just the western façade still standing. Still clearly visible in the photo is the Russian word for "children" painted by sheltering residents in large letters on the ground in front of the entrance. Hundreds of Ukrainians, including many children, were taking shelter inside the theater when it was attacked. Communications in the besieged city have been difficult for days and rescue work has been hampered by the danger of near-continuous shelling, according to reports from inside the city.

Zelensky: Ukrainian President Volodymyr Zelensky said the sustained Russian attack on Mariupol is an "act of terror" that will be "remembered for centuries." In a video message posted to Facebook early Sunday, the Ukrainian President said Mariupol will go down in history as an example of war crimes.

Steel plant: There are conflicting reports over the status of one of Ukraine’s key industrial facilities – the Azov Steel plant in Mariupol. Late Friday, a government advisor reported the plant was in Russian hands after ongoing battles with Ukrainian troops. But in an update Saturday, the Azov battalion, which has a large presence in Mariupol, said the plant remained in their hands.