It’s been nearly a month since Russia launched its invasion of Ukraine, deploying tens of thousands of troops into an offensive against its neighbor from three sides.

While Ukraine’s military is much smaller, its forces have mounted a fierce resistance that has managed to hold off Russian advances in some parts of the country. A senior NATO intelligence official said Monday signs were pointing to a stalemate emerging in Russia’s offensive, with Russian ground forces remaining stalled and Russian combat aircraft unable to achieve air superiority.

Precisely how many Russian troops have been killed in their campaign thus far is unclear.

On March 2, a Russian defense ministry spokesman put the number of dead Russian military personnel at 498. But that number has not been updated by officials since then.

Then on Monday a pro-Putin Russian tabloid published -- then later removed -- a report with an updated toll of 9,861 Russian armed forces deaths in the war in Ukraine, citing the Russian defense ministry.

The report from the tabloid Komsomolskaya Pravda originally read: "According to the Russian Defense Ministry, during the special operation in Ukraine, the Russian Armed Forces lost 9861 people killed and 16153 wounded."

CNN analyzed the website’s HTML code, which indicated that the article was published on Monday at 12:09 a.m. Moscow time.

Seconds after CNN read the original article -- at 9:56 p.m. Moscow time, according to the HTML code -- the story was updated and all references to the death count were removed. That update on the outlet's website came shortly after the article began to get attention from social media posts, which referenced the death count.

The original report from the tabloid is in line with US Department of Defense estimates that there have been up to 10,000 Russian military deaths. Ukraine has put the number even higher.

CNN is not able to independently verify any of these figures.

After the update, Komsomolskaya Pravda, published a statement saying that "access to administrator interface was hacked" and that "a fake insert was made into a publication."

They claimed that "inaccurate information was immediately removed." CNN analysis showed that the update came after 21 hours.

The Kremlin dodged questions on the course of the war in Ukraine, which were put to the Defense Ministry on Tuesday. The ministry said it "does not have the authority" to publicize a count of Russia’s military deaths while the "military operation" is still ongoing.

Natalia Hayetska said it was “incredibly difficult” for her and her elderly parents to escape from the besieged Ukrainian city of Mariupol.

She said her family and their four cats were able to escape to Lviv thanks to “good people” who helped them on a four-day journey.

Conditions in Mariupol are desperate, she said.

“No infrastructure, no potable water — no water at all — no electricity. And there was constant bombing. And not only artillery, they were also using UAVs and some aircrafts. They are dropping bombs all over the city," Hayetska told CNN's John Berman.

"People were carrying those who were killed closer to the road and covering them with blankets. They were waiting for someone to collect the bodies. Some people buried the bodies in the yard because they knew no one would come to them. This is all true," she said.

Her mother, Halyna Zhelezniak, expressed gratitude to her daughter for making sure everyone evacuated together.

"I'm 84, and this was the first time in my life when I felt horror. I couldn't believe it happened. It was just a shock. I couldn't believe it. But this is the reality my family and I had to face. I'm grateful to my daughter Natalia for saving us. She simply saved us. She didn't leave us behind," she said.

Her father, Ihor Zhelezniak, said that he doesn't expect to see his city rebuilt again in his lifetime.

"The Mariupol I left will maybe be back in the year 3000, but I'm not going to live that long. Because there are only ruins," he said.

After days of fighting, Ukrainian forces have regained control of Makariv, a town 30 miles west of Kyiv, the Armed Forces of Ukraine said in a post on Facebook on Tuesday. The "state flag of Ukraine was raised over the city of Makariv" as the Russians retreated, the post said. CNN could not confirm the claim by the Ukraine forces.

Meanwhile, Russian opposition leader Alexey Navalny was found guilty of fraud on Tuesday by a Moscow court, according to state-owned news agency Tass. While not directly connected to the invasion of Ukraine, the verdict coincides with Putin's broad crackdown on opposition voices and independent media over the past four weeks.

Ukrainian towns and cities that are withstanding Russia’s attempts to conquer them are being hammered by artillery fire in response, according to local officials.

In the far east of the country, close to two breakaway pro-Russian statelets, the city of Rubizhne is under constant shelling, regional head Serhii Haidai said in a social media post.

"The enemy was unable to 'blitzkrieg' Rubizhne, so they are destroying the town, targeting hospitals, schools, and residential buildings," Haidai said.

Emergency services and ambulances are often unable to reach the wounded, he said, due to the risk of coming under fire.

Two days ago, Haidai reported the deaths of 56 elderly care home residents in a town about 10 kilometers (6.2 miles) from Rubizhne. The regional official said a Russian tank had opened fire on the building on March 11, but it had taken several days to confirm the fatalities due to the dangers of constant shelling.

Meanwhile, the head of the Kharkiv region, Oleh Syniehubov, said the city was shelled 84 times overnight, marking an increase in the rate of attacks on the city.

Kharkiv is Ukraine’s second largest city, sits close to the Russian border, and is a key target for Putin’s invading forces.

Syniehubov said city neighborhoods and outlying towns had come under fire from Derhachi to the northwest, through Saltivka and Tsyrkuny in the northeast, to the city’s huge tractor plant to the southeast.

Gigin made the comments on the show "Sunday Evening with Vladimir Solovyov."

On the show, Gigin referred to Schwarzenegger as the face of "American imperialism and colonialism."

Gigin criticized Schwarzenegger, adding: "He who is in California will tell us, who live here, who have family members and friends in Ukraine, the truth?"

It comes after Schwarzenegger posted a video on his verified Twitter account on March 17 speaking against the Russian invasion of Ukraine and asking Russians to resist their country's disinformation.

"There are things that are going on in the world that are being kept from you, terrible things that you should know about," Schwarzenegger said in the video. He asked Russians to challenge the war, which he said is being pushed by government leaders.

"Ukraine did not start this war. Neither did nationalists or Nazis," he said. "Those in power in the Kremlin started this war."

The video has since garnered more than 35 million views.

More than 3.5 million refugees have now fled Ukraine, according to the latest update from the UN Refugee Agency (UNHCR).

According to the update, 3,532,756 refugees have fled Ukraine since the Russian invasion began on February 24.

In a separate update, the agency said it has ramped up supplies of thermal blankets, hot meals, and tents along the Ukrainian border, with a particular focus along the Polish side as temperatures plummet.

While Ukrainian forces have been celebrating what they say is the re-capture of a town to the west of Kyiv, the mayor of a city to the east of the capital is calling on residents to leave.

"There is no urgent need to be in the city at the moment. Fighting is already raging around the region. I appeal to the population, be smart and leave the city if you can," Boryspil mayor Volodymyr Borysenko said in a video statement posted to Facebook.

Borysenko said authorities would help with the evacuation of those who did not have their own vehicles, adding there were almost daily transfers to the west of Ukraine, where Russian attacks have been much lower in numbers.

"As practice shows, in those cities where combat is taking place, the fewer civilians in the city, the easier it is for (Ukraine’s) armed forces to operate," the mayor said.

According to the United Nations, at least 10 million people have fled their homes following Russia’s invasion, which started almost four weeks ago.

That figure accounts for almost a quarter of the country's population, which was calculated at 44 million by the World Bank in 2020.

Of those who have left their homes, the majority -- 6.48 million as of March 16, according to figures provided by the International Organization for Migration on Friday -- have been internally displaced since the conflict began on February 24.

The most troubling takeaway from President Joe Biden's warning that there is "evolving intelligence" that Russia is exploring options for cyberattacks is that US spy agencies have been spot on so far in predicting Vladimir Putin's moves.

It was always possible that the Russian leader could seek to impose direct reprisals on the US government and Americans for their support of Ukrainians and crippling sanctions on Russia after his brutal invasion.

Putin could turn his intelligence agencies or related criminal gangs against US government departments, hospitals, critical infrastructure and utilities. Opening a cyber front, or at least hinting at one, would be consistent with Putin's strategy of escalation, which has seen him rattle nuclear sabers, turn fearsome fire on Ukrainian civilians and use new generation hypersonic missiles.

But the key question is whether the Russian leader would risk a full-bore cyber conflict with Washington, which, as CNN reported last week, has fearsome capabilities of its own that may outmatch Russia's arsenal and could quickly deliver devastating hits against Russian critical infrastructure.

"The magnitude of Russia's cyber capacity is fairly consequential, and it's coming," Biden warned on Monday in a written statement. "He (Putin) hasn't used it yet, but it's part of his playbook." 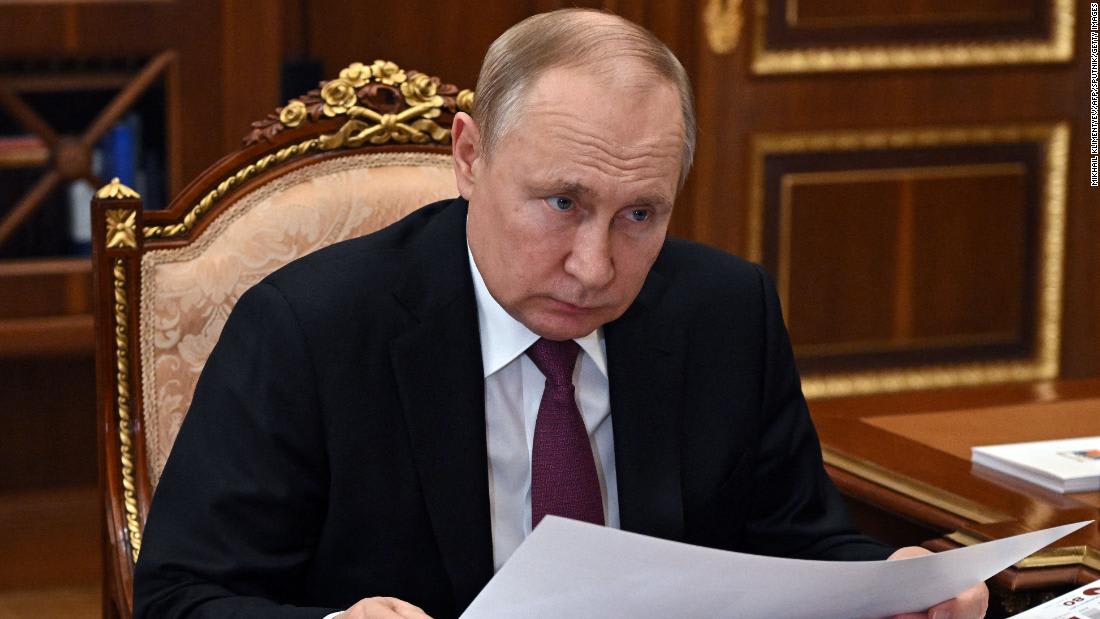 Analysis: Putin's next escalation could be a direct cyberattack on the US

Russian forces forcibly deported 2,389 children from Donetsk and Luhansk in Ukraine, the Ukrainian Ministry of Foreign Affairs said in a statement on Monday.

The Russian Defense Ministry said on Sunday that 16,434 people, including 2,389 children were evacuated a day earlier. The evacuations took place in various places, including in the Russia-backed Donetsk People's Republic and Luhansk People's Republic, and people left of their own volition, according to the ministry.

UNICEF commented on these latest reports on Tuesday and raised concerns, though noted they have not been able to independently verify them.

"The abduction of children during times of war is one of the six grave violations against children in conflict and is prohibited under international humanitarian law," UNICEF spokesperson James Elder said.