US President Joe Biden warned Wednesday that the threat of Russia using chemical weapons in its ongoing attack of Ukraine was “real” as he departed the White House for a high-stakes trip to Europe to tout Western unity and support for Ukraine.

Asked by CNN’s Jeremy Diamond about the threat of chemical warfare in Ukraine, Biden said, “I think it’s a real threat,” but declined to elaborate further before boarding Marine One.

“These sanctions are being felt in Russia where the economy is teetering, The ruble is collapsing, the stock exchange is in large part still closed and the central bank is strongly impacted,” he said.

“There will be no taboo if we need to go further,” Attal said about any additional sanctions.

The European Union’s latest round of sanctions in early March against Russia included measures targeting 160 oligarchs and Russian politicians.

Russian forces have looted and destroyed a lab close to the abandoned Chernobyl nuclear power plant that was used to monitor radioactive waste, according to Ukraine’s government.

The site of the world’s worst nuclear disaster fell into Russian hands in the first week of Russia’s invasion, triggering fears that safety standards inside the exclusion zone could be compromised.

According to a Ukrainian government agency, the laboratory was part of a European Union-funded attempt to improve radioactive waste management through on-site analysis of waste samples as well as the packaging used to dispose of waste.

The government agency also reported that samples of radionuclides — unstable atoms that can emit high levels of radiation — had been removed from the lab. It said it hoped Russia would use the samples to “harm itself, and not the civilized world.”

It is the latest scare to emerge from the infamous Ukrainian site that sits close to the border with Belarus.

More background on Chernobyl: Staff working there on the day it was captured at the end of February only recently had the chance to go home, three weeks after they were due to rotate with an incoming team.

Local Slavutych Mayor Yuriy Fomichev spoke to CNN after the workers had been confined to the plant for 10 days, describing them then as “exhausted, both mentally and emotionally, but mainly physically.”

Fomichev said that more than 100 people were shift personnel who should have been relieved after 12 hours.

Earlier this month, the site was forced to get power from emergency diesel generators for several days before being reconnected to the national electricity grid after repairs to damaged lines.

And on Tuesday, Ukraine’s government also warned of several fires close to the plant, which it said had probably been triggered by Russian artillery or arson.

Chubais is the highest-profile Russian official to quit since the war began.

Reuters reported that Chubais had left Russia and did not plan to return, also citing an unnamed source.

CNN is seeking comment from Chubais himself and has not independently confirmed that he has left Russia or the reason for his resignation.

Chubais had been in the environment job since December 2020, TASS said. He rose to prominence as Boris Yeltsin’s finance minister in the 1990s.

Eighty people have escaped towns in east Ukraine on Wednesday morning after another night of attacks by Russian forces, a regional official said.

Authorities posted the addresses of collection points on Facebook, where people could pick up buses and small vans to drive them to railway stations and then onward to the west of Ukraine.

The humanitarian corridor was one of nine announced by Ukraine’s government for Wednesday – others include the key link between Mariupol and Zaporizhzhia in the southeast.

The head of the Luhansk region, which includes Rubizhne, has been reporting intense Russian assaults in his region for many days.

Serhii Haidai said there were ongoing battles between Russian and Ukrainian forces for control of territory with Russian aircraft also targeting Rubizhne.

Oleksandr Markushyn, mayor of the Kyiv suburb of Irpin, said the Ukrainian armed forces, territorial defense and police "have 80% of our city under control."

Speaking on Ukrainian television, Markushyn said, "Our city is being constantly shelled by GRAD systems. Very massively. They are pounding the residential area, multi-story buildings."

Despite mass evacuations in recent weeks, Markushyn, who said his own house had been destroyed on Wednesday, estimated that up to 6,000 people are still in Irpin and that small groups are being evacuated each day.

"Around 4,000 people do not want to leave the city at all. We help them with food and medical supplies," he added.

The national police on Wednesday said they are resuming work in Irpin, much of which was occupied by Russian forces. It was another possible sign that Ukrainian security forces are regaining territory around the capital of Kyiv.

Irpin, a suburb located to the northwest of Kyiv, has seen weeks of fierce fighting and heavy shelling since Russia's invasion was launched nearly four weeks ago.

In an exclusive interview ahead of Thursday’s meeting, Michel confirmed that “we have proposed to him to address the summit.”

He added that the European Council was the first assembly Zelensky addressed after the start of Russia’s invasion on Feb. 24.

During a sit-down interview in Brussels, Michel told Amanpour: “We must make sure that Putin will be defeated. It must be the common goal.”
“This is a question of security, for the future of Europe and for the future of the world.”

Michel said he has spoken with Zelensky and the Russian president multiple times since Russia invaded Ukraine, hoping to help them reach “a ceasefire and to make possible a sincere track in order to negotiate.”

“It’s extremely difficult, because we are not certain that the Russian government is sincere,” he added. “We are not naïve – we think that they are trying to attack military in order to strengthen their positions in the negotiation talks.”

“But on the other hand, we must change the balance of power in order to give to President Zelensky a better position in those direct talks with Russia,” Michel said.

The European Council meeting is scheduled to run from March 24-25, with Ukraine as the main topic on the agenda. US President Joe Biden is confirmed to attend Thursday to discuss Ukraine and transatlantic cooperation.

Michel also discussed sanctions, saying the European Union “must be intelligent” on sanctions against Russia.

When pressed on Europe’s reliance on Russia for its energy supplies, Michel conceded that “we are too much dependent on Russian gas.” However, he added this was not a recent realization, pointing to the 2020 European Green Deal as one long term solution to over-reliance on Russia.

Ukrainian President Volodymyr Zelensky thanked Japan for its immediate support of his country and urged Tokyo to apply “more pressure on Russia to help restore peace” in a video address to Japanese lawmakers on Wednesday.

“Japan helped us immediately, and we thank them from the bottom of our heart,” Zelensky said in a virtual speech in front of members of the Diet, Japan’s parliament.

Prime Minister Fumio Kishida, Ministers for Foreign Affairs and Defense, and Ukrainian envoy to Japan Sergiy Korsunsky were among the attendees.

Zelensky said Japan was the first Asian country to apply pressure on Russia, adding that “continued pressure on Moscow would help restore peace.”

He also warned Japanese lawmakers of reports that Russia was preparing a chemical weapons attack against Ukraine.

Zelensky's online address marked the first time the Ukrainian President has addressed an Asian legislature, but also the first address by a foreign leader at the Japanese Diet, a spokesman for the House of Representatives told CNN.

His speech was delivered in two separate rooms of an office building of the House of Representatives (the lower house of the National Diet of Japan), not in the Diet’s plenary session hall, the spokesman added.

As Russia's invasion of Ukraine approaches the one-month mark, fighting is raging across major cities with defending forces trying to take back some areas, according to a US official. 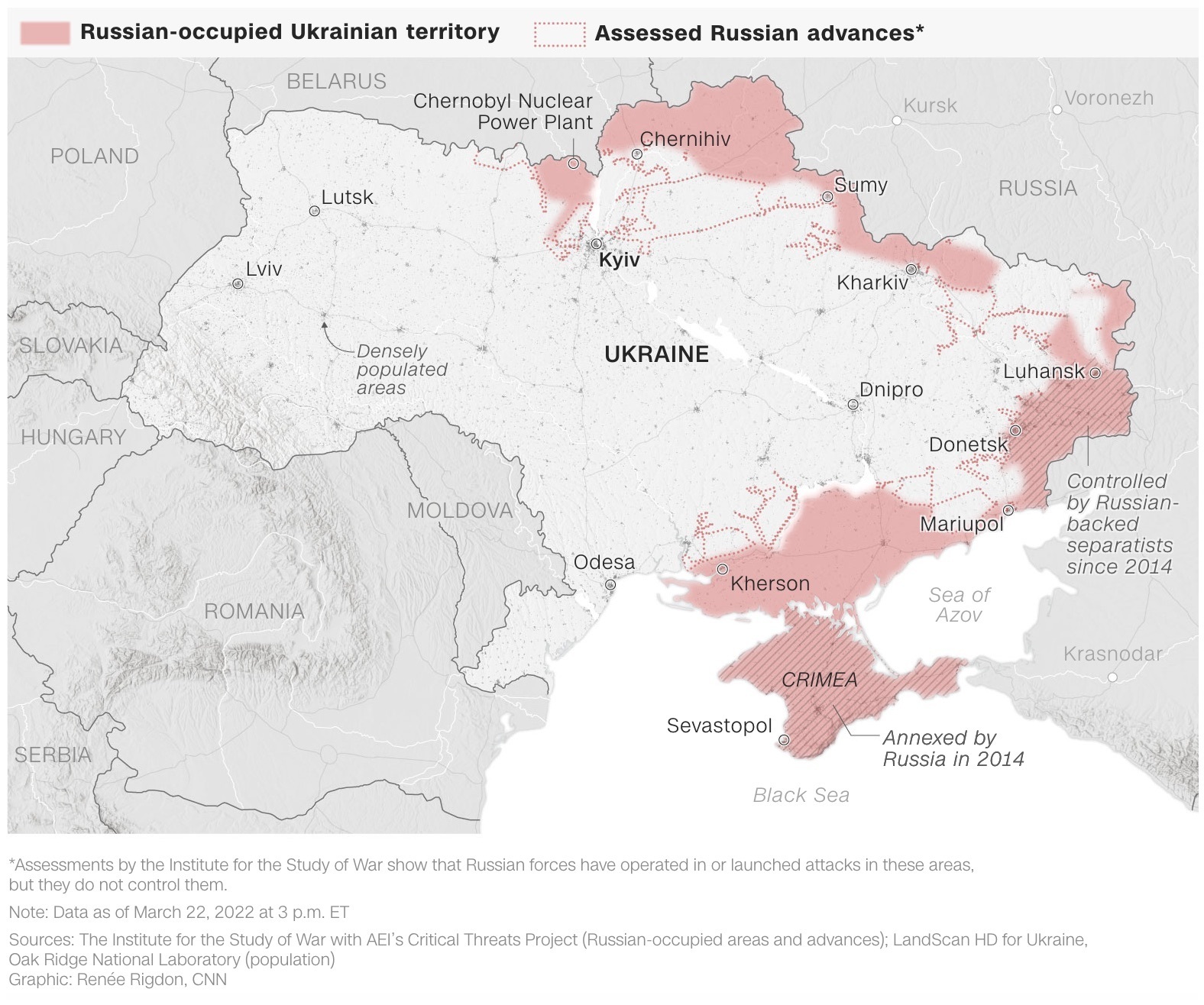