Mariupol city council says that based on eyewitness reports, it now believes about 300 people died in a Russian attack on a theater in the city nine days ago.

The building was being used as one of the main shelters in the besieged city of Mariupol, but was hit by a Russian airstrike on March 16. Estimates of the number of people taking shelter in the theatre ranged from between 800 to 1,300.

Information about the full extent of the attack has been slow to emerge due to the almost complete breakdown of essential services in the city, including communication networks.

“Unfortunately, we start the day with bad news," Mariupol city council said on its Telegram channel on Friday.

"There is information, based on eyewitnesses, that about 300 people died in the Drama Theater in Mariupol as a result of a bombing by Russian aircraft.

"We still do not want to believe in this horror. We still want to believe that everyone managed to escape. But the words of those who were inside the building at the time of this terrorist act say otherwise.”

Aerial pictures before the attack showed the Russian word for children painted in large lettering on the ground outside the front and back of the theater building.

“The occupier knew where he was hitting. He knew what the consequences might be, and anyway the bombs fell on this place,” the city council's statement continued.

There is still no word on possible casualties after a separate attack on an art school building in Mariupol that was also being used as a shelter.

The school was hit five days ago. Officials estimated about 400 people were sheltering there.

Some context: Mariupol, the southeastern Ukrainian city home to around 450,000 people before the war, has been under near-constant attack from Russian forces since early March with satellite images showing significant destruction to residential areas.

The International Rescue Committee (IRC) warned Friday that civilians in Ukraine are facing a "catastrophic health crisis" as attacks on health infrastructure are limiting access to "life-saving services and supplies."

The IRC said 64 attacks on healthcare facilities, transport, and personnel were recorded over the first four weeks of the invasion.

During this time, the IRC claimed more than 4,300 babies have been born in Ukraine and 80,000 births are expected in the next three months, but "as Ukraine’s health system continues to collapse, the risk to new mothers and babies will grow."

"Lack of access to safe water and critical healthcare, and the potential for a surge in vaccine-preventable diseases like Covid-19 and polio may significantly exacerbate the ongoing humanitarian crisis," the IRC said.

The organization's Senior Director of Health Mesfin Teklu said people displaced in crowded reception centers and bunkers are at risk of contracting Covid-19 as fewer than 40% of Ukrainians have been vaccinated against the virus.

Teklu said Ukraine was also experiencing a polio outbreak and the conflict has disrupted vaccinations.

"In some areas most affected by the conflict, including Ukraine’s second largest city of Kharkiv, polio vaccination rates are below 50%," he said.

“Ukraine also struggles with high rates of HIV/AIDS and tuberculosis," Teklu added. "The IRC is worried about these and other infectious diseases spreading as the conflict persists and water, sanitation and hygiene systems continue to become damaged.”

The IRC called for the protection of healthcare access "by ensuring the safety of providers and the free flow of medical supplies and equipment," adding that "global leaders must prioritize support to the most vulnerable, including women, children and the elderly."

Speaking in a televised message, Vereshchuk said the corridors will link the two cities with Zaporizhzhia, which lies to the north and is still under Ukrainian control.

A centralized evacuation is also planned by bus from the Russian occupied city of Berdyansk, the deputy prime minister said, adding that 48 buses are parked at the entrance to the city.

Previous days have seen Ukraine announce up to nine corridors, serving badly-hit towns and cities in the country’s east and north, as well as the south. There was no word from Vereshchuk explaining why these locations were not on Friday’s list.

Some background: Fighting in Mariupol has lasted for weeks, with people who have escaped Russia's bombardment saying that the city has been effectively wiped off the map. Russian troops gained control of Melitopol on February 26 and a new mayor was installed in the city earlier this month.

Ukrainian armed forces named the Russian landing ship they say they attacked and destroyed in Berdyansk as the "Saratov," in a statement on Friday.

In earlier reporting, the ship was named as the "Orsk."

“In the Azov operational zone, according to updated information, a large landing ship 'Saratov' was destroyed during the attack on the occupied Berdyansk port," the statement said.

The statement identified the two other large landing ships -- the "Caesar Kunikov" and "Novocherkassk" -- that were also said to have been destroyed during the attack.

"Other losses of the enemy are being clarified," the statement said.

Ukrainian armed forces said they destroyed the large Russian landing ship at the port of Berdyansk in southern Ukraine on Thursday.

The port, which had recently been occupied by Russian forces with several Russian warships in dock, was rocked by a series of heavy explosions soon after dawn.

Social media videos showed fires raging at the dockside, with a series of secondary explosions reverberating across the city.

Several Russian ships had been unloading military equipment at Berdyansk in recent days, according to reports from the port by Russian media outlets.

Russian Ministry of Defense spokesman Igor Konashenkov claimed Friday that Russian forces destroyed "the largest of the remaining fuel depots" near Kyiv, with a strike carried out with sea-launched Kalibr cruise missiles.

"On the evening of March 24, a strike was carried out with sea-launched Kalibr precision cruise missiles on a fuel base in Kalynovka, outside Kyiv," Konashenkov claimed.

"The largest of the remaining fuel depot of the Ukrainian armed forces, which supplied fuel to military units in the central part of the country, was destroyed," Konashenkov added.

CNN could not immediately verify that claim.

More details have emerged this week about the military arsenal that Russia is using in Ukraine.

US President Joe Biden confirmed on Monday that Russia has also used hypersonic missiles in its invasion.

"And if you'll notice, (Russia has) just launched the hypersonic missile, because it's the only thing that they can get through with absolute certainty," Biden said. "It's a consequential weapon ... it's almost impossible to stop it. There's a reason they're using it."

But British intelligence and even Biden's own defense secretary have downplayed Russia's use of its air-launched Kinzhal missiles. 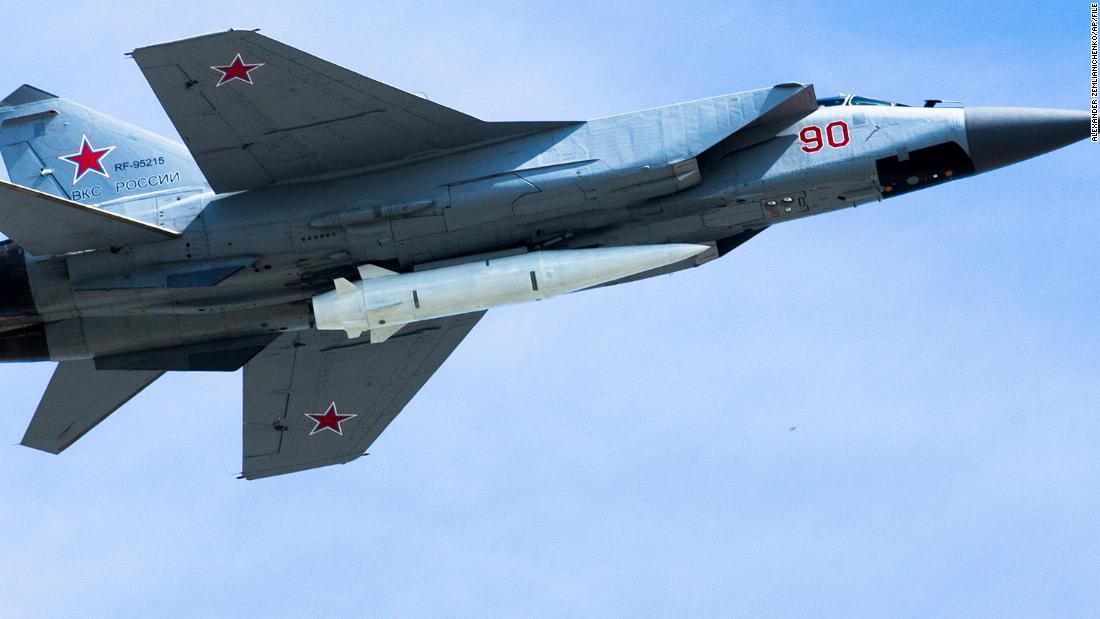 What to know about Russia's hypersonic missiles

US President Joe Biden and European Commission president Ursula von der Leyen on Friday announced a joint task force in an effort to wean Europe from its dependence on Russian oil and gas.

The panel, chaired by representatives from the White House and the European Commission, will aim to find alternative supplies of liquified natural gas and reduce overall demand for natural gas.

The United States will work toward supplying Europe with at least 15 billion cubic meters of liquified natural gas in 2022, in partnership with other nations, the White House said.

Some context: Europe's dependence on Russian gas and oil has proved a major sticking point in Western efforts to punish Moscow for its invasion of Ukraine. While the US banned Russian energy imports, Europe found it far more difficult to cut off its supplies.

The group will also work toward reducing greenhouse gas emissions by paring down methane emissions and using clean energy.

Ukrainian forces have retaken towns and defensive positions on the eastern outskirts of Kyiv, Britain's Ministry of Defence said Friday in its latest intelligence update.

"Ukrainian counter-attacks, and Russian Forces falling back on overextended supply lines, has allowed Ukraine to re-occupy town and defensive positions up to 35 kilometers (21 miles) east of Kyiv," the ministry said.
"Ukrainian Forces are likely to continue to attempt to push Russian Forces back along the north-western axis from Kyiv towards Hostomel Airfield."

Meanwhile, the advance of Russian forces toward the Black Sea port city of Odesa was stalling, the ministry said.

"Russian forces are still attempting to circumvent Mykolaiv as they look to drive west towards Odesa with their progress being slowed by logistic issues and Ukrainian resistance," the ministry added.

Some context: According to official Ukrainian accounts, the country's forces have retaken territory to the east of Kyiv following intense fighting Thursday, reversing previous Russian gains. Social media videos geolocated by CNN showed Ukrainian troops along with some captured Russian armor in the small settlement of Lukyanovka, some 35 miles (55 kilometers) east of the capital.

If there's one nation that understands Ukraine's torment, it's Poland, which welcomes President Joe Biden on Friday as part of his emergency mission to shore up NATO's defenses following Russia's brutal invasion.

In the United States, Biden's warnings that democracy is under siege from menacing autocrats can seem remote, even after former President Donald Trump's US Capitol insurrection and attempt to steal the 2020 election.

But in Poland, which neighbors Ukraine, freedom is fresh enough to still be a novelty. In a tortured 20th-century history, the country — torn between East and West — was repeatedly conquered, was ruled by foreign tyrants and saw millions of its people purged or driven as refugees from homes destroyed by warfare.

Poland again finds itself on the front line of conflict. It's on the dividing line between states in the NATO club, to which it now belongs, and President Vladimir Putin's Russian orbit, which includes another Polish neighbor, Belarus. Poland has opened its borders to more than 2 million of the nearly 3.7 million Ukrainians who have fled Putin's onslaught, and the war came close to its borders with a Russian strike on a base in western Ukraine earlier this month.

Like Ukraine, Poland lived for decades under Moscow's Communist iron fist. Like Ukrainians, Poles are often gritty, are deeply suspicious of Russians and have fighting for their freedom and sovereignty ingrained in their DNA. Unlike Ukraine, one of the founding republics of the Soviet Union, Poland made it to the West after decades under the Warsaw Pact umbrella. And in addition to being in NATO, it's a member of the European Union, albeit one that has had tensions recently with Brussels over its own flirtations with populist nationalism.

As Putin's threat mounted in recent years, Poland hosted rotations of US troops and jets. In February, before Putin invaded Ukraine, Poland was one of the nations to which Biden ordered 3,000 troops to bolster the alliance's eastern flank. If the war in Ukraine spills over into a broader conflict between Russia and the West, a frightening prospect, there's a good chance it could happen in Poland. 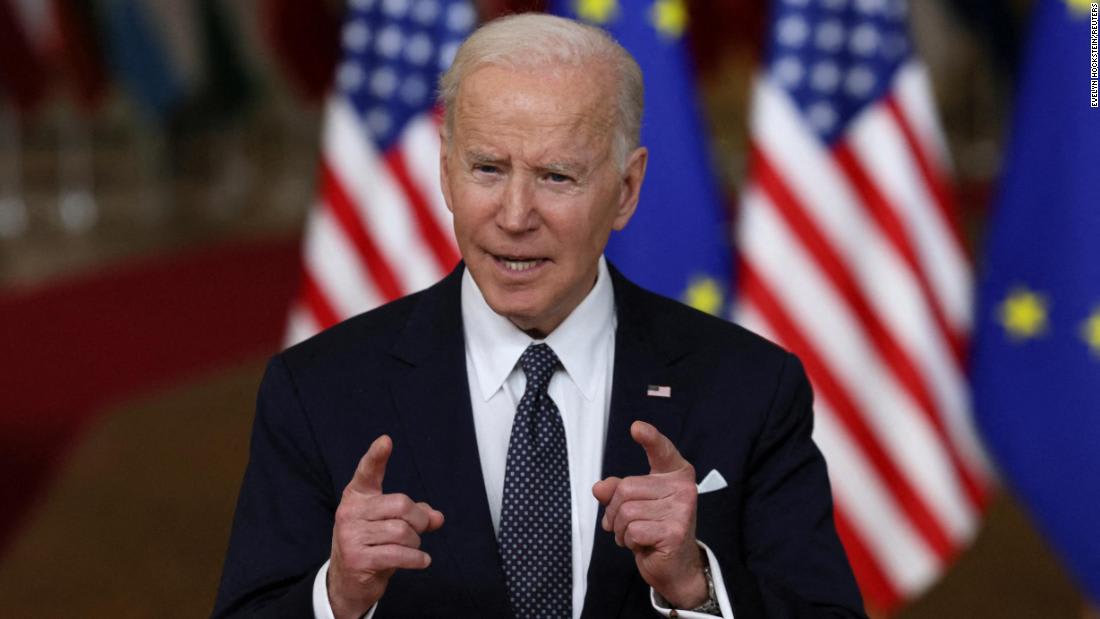 Analysis: Here's why Biden is going to Poland

On Thursday, as Western leaders gathered in Brussels for security summits, North Korea launched what it said was a new type of intercontinental ballistic missile (ICBM) — its first long-range test in more than four years.

According to analysts, the recent spate of North Korean missile tests suggest the country's leader, Kim Jong Un, is attempting to show an increasingly turbulent world that Pyongyang remains a player in the struggle for power and influence.

"North Korea refuses to be ignored and may be trying to take advantage of global preoccupation with the war in Ukraine to force a fait accompli on its status as a nuclear weapons state," Leif-Eric Easley, associate professor of international studies at Ewha Womans University in Seoul, told CNN.
"North Korea is nowhere near initiating aggression on the scale of Russia's invasion of Ukraine. But Pyongyang's ambitions likewise exceed self-defense as it wants to overturn the postwar security order in Asia." 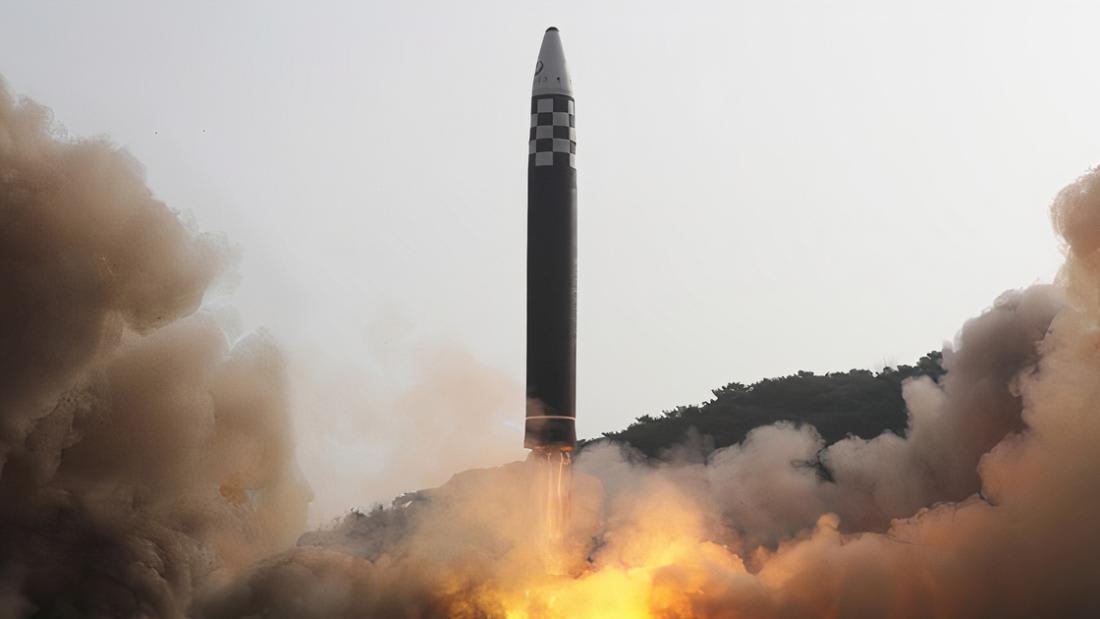 What we know about North Korea's new ICBM