The US government is wary about the possibility of a Russian cyberattack on US critical infrastructure paired with Kremlin attempts to spread disinformation about any incident’s effects to sow panic among Americans, a top US cyber official told CNN.

“All businesses, all critical infrastructure owners and operators need to assume that disruptive cyber activity is something that the Russians are thinking about, that are preparing for, that are exploring options, as the President said,” Jen Easterly, director of the US Cybersecurity and Infrastructure Security Agency (CISA), said in an exclusive interview with CNN.

“That’s why we are so focused on making sure that everybody understands the potential for this disruptive cyber activity,” Easterly said. “And it’s not about panic. It’s about preparation.”

The Biden administration has for months warned that Moscow could respond to US sanctions over Russia’s invasion of Ukraine with cyberattacks on US infrastructure — or that ransomware gangs like the one that hit Colonial Pipeline last year could lash out. 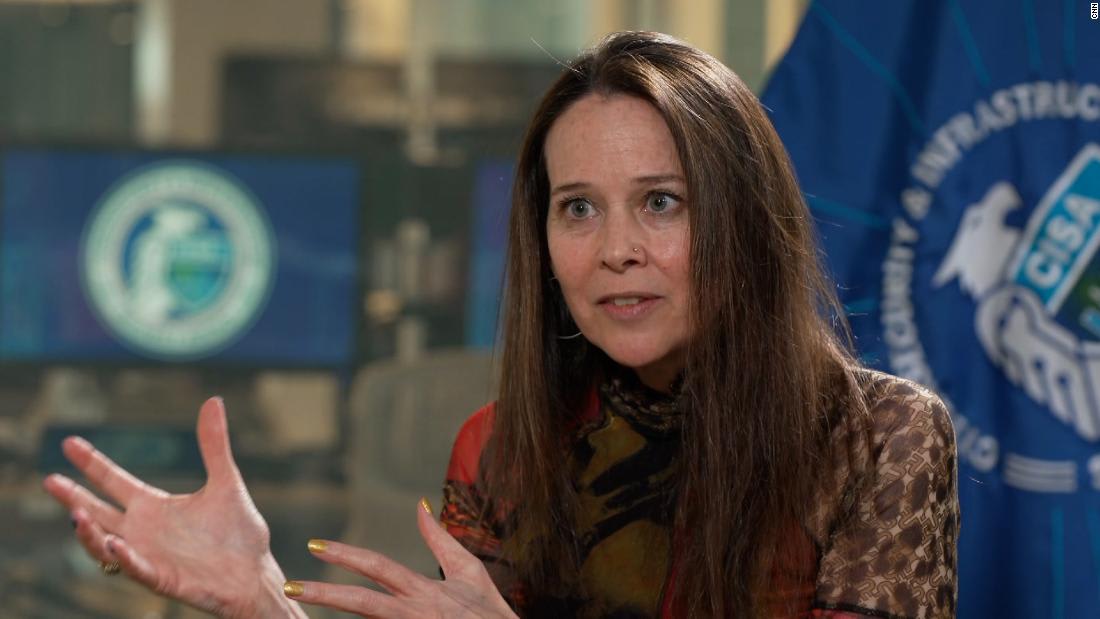 'Preparation, not panic': Top US cyber official asks Americans to look out for Russian hacking efforts

Tsikhanouskaya made the comments to the President via phone Saturday, while Biden was aboard Air Force One.

“I thanked President Biden for today’s speech in Warsaw and the US leadership in the great battle for freedom, the battle between liberty and repression," Tsikhanouskaya said.
"I assured President Biden that Belarusians are at the forefront of this struggle – and fearlessly stand alongside the people of Ukraine. I am confident that freedom and humanity will prevail. I asked the president to keep Belarus on the agenda.”

According to the White House, Biden thanked Tsikhanouskaya for attending his speech in Warsaw and "underscored the continued support of the United States for the Belarusian people in defending and advancing human rights, including freedom of expression, and free and fair elections."

A Ukrainian counterattack that began on Friday to the east of the city of Kharkiv has led to the recapture of several villages, according to the regional administrator.

CNN has geolocated and verified a video showing Ukrainian troops in control of Vilkhivka, one of the settlements that's roughly 32 kilometers (20 miles) from the Russian border in Ukraine's northeast.

Oleg Synegubov, Kharkiv regional administrator, said that a number of villages around Malaya Rogan were retaken by Ukrainian forces. The villages are roughly 20 kilometers (12 miles) from central Kharkiv, which has been nearly encircled by Russian forces since the early weeks of the invasion.

Video shows firefight: Additional video, published on Telegram Saturday, shows an intense firefight between Ukrainian forces — including members of the Azov Battalion — and Russian forces in the village of Vilkhivka. The Azov Battalion began as an ultra-nationalist militia in eastern Ukraine, and has since been absorbed into the Ukrainian military.

In the video, the firefights between Russian and Ukrainian forces are seen among the houses and backyards of the village. At one point, Ukrainian troops move toward the village school, where Russian forces appear to be holed up.

The soldier who uploaded the edited the video, claimed on Telegram the battalion had killed "about 70 troops," and commandeered a number of Russian military vehicles. CNN could not confirm the Russian military deaths, or the vehicle captures.

Claims of Russian prisoners: The soldier also claimed the battalion took 27 Russian troops prisoner. In the edited video, a number of apparently captured Russian soldiers are seen blindfolded and some are stripped of most of their clothes.

They are seen in the video being crammed into the back of cars and trucks and driven away by members of the battalion. Some were clearly injured.

Ukrainian counterattacks: The success of Ukrainian forces around Kharkiv has been mirrored further north, near the city of Sumy, where Ukrainian troops have liberated a number of settlements, according to videos geolocated and verified by CNN. A separate counterattack in the south about 63 miles (103 kilometers) northwest of Mariupol also led to the liberation of two villages from Russian forces, according to the Zaporizhzhia regional military administration.

A counterattack by Ukrainian forces 63 miles (103 kilometers) northwest of Mariupol has led to the recapture of two villages from Russian forces, according to the Zaporizhzhia regional military administration.

"The Melitopol Territorial Defense Battalion, together with other units of the Zaporizizhia Defense Forces, have successfully liberated the villages of Poltavka and Malynivka east of Huliaipole from the Russian occupiers," the administration said on their Telegram channel Saturday evening.

The data showed that dozens of explosions took place in the two villages over the last 14 hours.

Russian forces that entered the city are encountering the same spirit of resistance evident in other parts of the country, the president said in a video posted to social media.

"Free Slavutych which the invaders cannot subdue," he said.

Earlier Saturday, hundreds of locals amassed in the city square in a protest following the arrival of Russian troops.

Images and video geolocated by CNN showed a crowd of about several hundred people.

"Slavutych is Ukraine!" they chanted in the main square. "Glory to Ukraine."

Zelensky said every "demonstration of our resistance ... proves that Ukraine is a country full of life."

Russian forces briefly detained the city's mayor but eventually released him, according to a statement from Ukrainian political party Sluha Narodu.

The UN's nuclear watchdog, the International Atomic Energy Agency (IAEA), condemned Russia's seizure of the city, which was built to house workers of the nearby Chornobyl nuclear power plant.

The IAEA said in a statement it was closely monitoring the situation. The agency's director general, Rafael Mariano Grossi, voiced concerns about the ability of power plant staff to return safely to their homes.

Some background: The arrival of Russian forces in Slavutych came after several days of shelling against the city, which is strategically located close to the Dnieper River, about 95 miles (150 kilometers) north of Kyiv and close to the border with Belarus.

Ukrainian President Volodymyr Zelensky today reiterated his plea for international partners to step up their military assistance, saying his country only asks for 1% of NATO's tanks and planes.

In a Saturday video message posted to social media, Zelensky said the need to strengthen common security in Europe was raised during his two conversations with Polish President Andrezj Duda on Saturday.

Zelensky lamented the fact Ukraine has been waiting for 31 days for this assistance, saying it raises the question of who exactly "is ruling the Euro-Atlantic Alliance."

He called on Ukraine's international partners to "rally and activate their support" for the country, stressing Europe's safety and security hinges on it.

Two seriously injured children and an infant with pneumonia were among 5,208 people evacuated Saturday through humanitarian corridors, says Kyrylo Tymoshenko, deputy head of the Office of the President of Ukraine.

Tymoshenko said 4,331 residents of the besieged city of Mariupol have reached the southeastern city of Zaporizhzhia.

Ambulances took the two children and the infant to a Zaporizhzhia hospital, he said.

Among those evacuated Saturday were 351 people from the Kyiv region and 256 from the Luhansk region, the latter of which has received 80 tons of humanitarian aid, according to Tymoshenko.

Explosions were reported this evening in Ukraine's western Volyn oblast, says the head of the regional military administration there.

The blasts were heard about 9 p.m. local time after four air-launched missiles were fired from the territory of Belarus, according to Yurii Pohuliako.

"Three of four rockets were shot down in the sky over Volyn," he said.

CNN could not immediately verify the report.

Volyn region is in the northwest corner of Ukraine, and borders NATO member Poland and Russian ally Belarus.