“The future of Europe rests on your efforts, I ask you to increase the output of energy to ensure that everyone is Russia understands that you cannot use energy as a weapon,” Zelensky told the political forum virtually.

“[Qatar] can make their contribution to the stabilization of Europe,” he said.

Zelensky also referenced other conflict-stricken countries, saying the international order needs to be protected not just for Ukraine, but for Afghanistan, Iraq and Yemen.

The Ukrainian president also warned of the potential effect the invasion is having on food exports from Ukraine to countries around the world, saying no country is insured against food disruption.

Speaking at the opening of the Doha Forum, Sheikh Tamim said Qatar also stands against any hostilities against national sovereignties.

“We stand in solidarity with the millions of innocent people and refugees who are victims of this unjust war and the geopolitical calculations," he said.

The question of gas: Qatar, one of the world's top suppliers of liquefied natural gas (LNG), has been thrust into the limelight as European states rush to find alternatives to the Russian gas that has powered their economies for decades, while Moscow presses on with its brutal war in Ukraine.

The European Union depends on Russia for about 40% of its natural gas. This week, German economy minister Robert Habeck left the Qatari capital, Doha, with an understanding to have Qatar supply it with gas. Germany currently has no terminals to receive direct shipments of LNG from Qatar, but it plans to build two.

“Russian forces are proving reluctant to engage in large scale urban infantry operations, rather preferring to rely on the indiscriminate use of air and artillery bombardments in an attempt to demoralise defending forces,” the ministry said.

"It is likely Russia will continue to use its heavy firepower on urban areas as it looks to limit its own already considerable losses, at the cost of further civilian casualties."

When Vladimir Putin's forces last approached a capital city, they leveled it.

As the invasion of Ukraine enters its second month, Russian forces are digging in on the outskirts of Kyiv — and there are fears they could be preparing for the same indiscriminate scorched-earth tactic used in the Chechen capital of Grozny in 1999.

Kyiv is one of Ukraine's many jewels — a city more than 1,500 years old, a once-bustling capital of 2.8 million people, and home to irreplaceable international treasures, including architectural landmarks and cultural monuments.

"If Putin levels Kyiv the way he's been leveling Kharkiv and other cities, there is a lot that will be lost forever," said Olenka Z. Pevny, an associate professor of Slavonic and Ukrainian Studies at the University of Cambridge.

Here are some of the sites experts say are at risk: 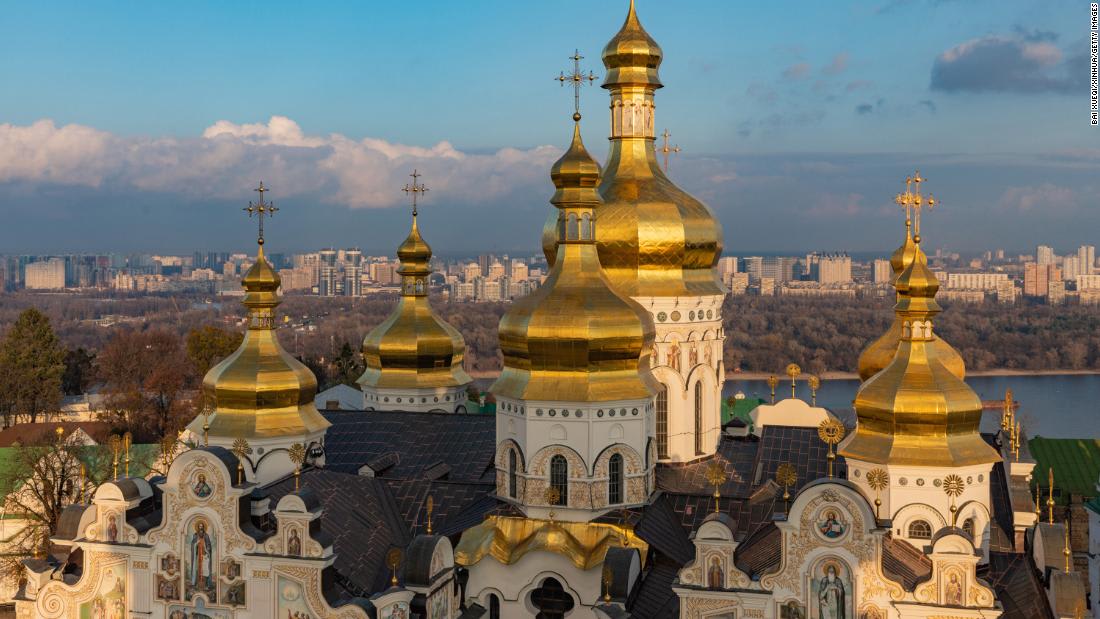 These are some of the historical sites at risk in Kyiv

In a video address on Friday, Ukraine's President Volodymyr Zelensky said the country's military had dealt "powerful blows" to Russia, and thanked all those who were helping defend the nation.

"Over the past week, our heroic armed forces have dealt powerful blows to the enemy, significant losses," Zelensky said. "I am grateful to our defenders who showed the occupiers that the sea will not be calm for them even when there is no storm. Because there will be fire."

Russian losses: Zelensky claimed that more than 16,000 Russian soldiers had been killed since the war began, a far higher number than the estimate Russia put forth Friday. CNN cannot independently confirm these figures.

"By restraining Russia's actions, our defenders are leading the Russian leadership to a simple and logical idea: talk is necessary. Meaningful. Urgent. Fair. For the sake of the result, not for the sake of the delay," he said. "16,000 Russian servicemen have already died. For what? What does it give and to whom?"

Any negotiations with Russia must guarantee Ukraine's sovereignty and the country's territorial integrity, he added.

Civilian evacuations: The President added that Ukraine had established 18 evacuation corridors this week, allowing more than 37,000 people to escape "blocked cities" — including more than 26,000 residents from Mariupol, which has been under relentless shelling for weeks. "The situation in the city remains absolutely tragic," Zelensky said.

US President Joe Biden on Saturday is taking part in his final stop on a last-minute trip to Europe aimed at synchronizing how Western allies will address Russia's war with Ukraine and reassure nations that they have the support of the United States.

In Warsaw, Biden will hold a bilateral meeting with Polish President Andrzej Duda to discuss how the US and its allies are responding to the refugee crisis that has ensued as a result of the war and he will meet with Ukrainian refugees.

Before returning to Washington, Biden will also deliver a speech billed by the White House as a "major address."

His Europe trip: Biden's multi-day swing through Europe began in Brussels, where heconferred with major US allies on the global response to the war. The trip is set to end in a nation bordering Ukraine — where the regional security issues and the humanitarian crisis underway will be front and center.

The visit to Ukraine's western neighbor comes as Poland has, on several fronts, urged the US to do more in the war.

Emergency meetings: During snap summits in Brussels, Biden announced new sanctions against Russian parliament members, revealed the US' intent to take in 100,000 refugees fleeing Ukraine and conferred with leaders on how the world will respond if Russia deploys a chemical, biological or nuclear weapon during the war.

The sun is rising in Kyiv, where a Ukrainian official says Ukraine's forces are "going on the counterattack" around the capital. Meanwhile, Russia says it will now concentrate on eastern Ukraine, claiming the "first stage" of its military plan is complete.

Tyler Jacob, an American living in Ukraine, was freed from detention in Russia on Friday, according to the office of Sen. Amy Klobuchar.

“I am relieved that Tyler is safely reunited with his wife and daughter,” Klobuchar said in a statement. “Over the last two weeks, my team and I have been in close contact with his family, the State Department, and the US embassy in Moscow working towards this outcome, and I am grateful that we were able to help bring him to safety.”

Klobuchar’s office said Jacob, who is originally from Winona, Minnesota, was taken by Russian forces about two weeks ago while trying to leave Ukraine. He was held in Russia for 10 days.

“I am grateful that Tyler, his wife, and their daughter are in a safe place,” said Jacob’s father, John Quinn, in the statement by Klobuchar’s office.

Quinn told CNN his son was not mistreated in Russian custody, and his family is relieved he is coming home. “It was a roller coaster,” Quinn said. “It was up and down, the hurdles that we had to get over to get him to safety.”

A State Department spokesman told CNN the department was aware of the reports but had no further comment due to privacy considerations.

“They wanted to assassinate the leadership of Ukraine: our president and prime minister. That was the goal and a couple of them were sent to Ukraine without any success,” Markian Lubkivskyi, an adviser to Ukraine's defense minister said.

Lubkivskyi said the plot was confirmed by Ukraine’s intelligence service and special forces in charge of protecting Zelensky.

“All these documents and the necessary proof will be presented to the International Court,” he said, adding that he couldn’t reveal more due to operational reasons.

CNN was unable to independently confirm the claims.

The Wagner group first came to prominence during Russia’s invasion of eastern Ukraine in 2014. Since then, independent research and CNN investigations have found that the private military contractor has operated in Syria and multiple countries in Africa. They have been accused by US officials and human rights watchdogs of sustained human rights abuses.

The group is thought to be connected to — and financed by — Yevgeny Prigozhin, an oligarch so close to the Kremlin that he is known as Putin's "chef."

The Kremlin has repeatedly denied any links to the group. Prigozhin denies any involvement in Wagner.

On Thursday, the United Kingdom became the latest country to sanction Wagner.

Lubkivskyi says that Ukrainian intelligence has tracked the group inside and outside of Ukraine and that several Wagner operatives have been killed inside the country, identified by their unique ID tags.

Zelensky has repeatedly committed to staying in Ukraine to marshal the country’s defense during the war, now in its second month.

“The morale of the army is very high because our president is in Kyiv, our prime minister and parliament is here. This is very important to support people on the ground, to support the Ukrainian army and this is a very good signal to the international community,” Lubkivsyi said.