The sun is rising in Kyiv, where a Ukrainian official says Ukraine's forces are "going on the counterattack" around the capital. Meanwhile, Russia says it will now concentrate on eastern Ukraine, claiming the "first stage" of its military plan is complete.

Tyler Jacob, an American living in Ukraine, was freed from detention in Russia on Friday, according to the office of Sen. Amy Klobuchar.

“I am relieved that Tyler is safely reunited with his wife and daughter,” Klobuchar said in a statement. “Over the last two weeks, my team and I have been in close contact with his family, the State Department, and the US embassy in Moscow working towards this outcome, and I am grateful that we were able to help bring him to safety.”

Klobuchar’s office said Jacob, who is originally from Winona, Minnesota, was taken by Russian forces about two weeks ago while trying to leave Ukraine. He was held in Russia for 10 days.

“I am grateful that Tyler, his wife, and their daughter are in a safe place,” said Jacob’s father, John Quinn, in the statement by Klobuchar’s office.

Quinn told CNN his son was not mistreated in Russian custody, and his family is relieved he is coming home. “It was a roller coaster,” Quinn said. “It was up and down, the hurdles that we had to get over to get him to safety.”

A State Department spokesman told CNN the department was aware of the reports but had no further comment due to privacy considerations.

“They wanted to assassinate the leadership of Ukraine: our president and prime minister. That was the goal and a couple of them were sent to Ukraine without any success,” Markian Lubkivskyi, an adviser to Ukraine's defense minister said.

Lubkivskyi said the plot was confirmed by Ukraine’s intelligence service and special forces in charge of protecting Zelensky.

“All these documents and the necessary proof will be presented to the International Court,” he said, adding that he couldn’t reveal more due to operational reasons.

CNN was unable to independently confirm the claims.

The Wagner group first came to prominence during Russia’s invasion of eastern Ukraine in 2014. Since then, independent research and CNN investigations have found that the private military contractor has operated in Syria and multiple countries in Africa. They have been accused by US officials and human rights watchdogs of sustained human rights abuses.

The group is thought to be connected to — and financed by — Yevgeny Prigozhin, an oligarch so close to the Kremlin that he is known as Putin's "chef."

The Kremlin has repeatedly denied any links to the group. Prigozhin denies any involvement in Wagner.

On Thursday, the United Kingdom became the latest country to sanction Wagner.

Lubkivskyi says that Ukrainian intelligence has tracked the group inside and outside of Ukraine and that several Wagner operatives have been killed inside the country, identified by their unique ID tags.

Zelensky has repeatedly committed to staying in Ukraine to marshal the country’s defense during the war, now in its second month.

“The morale of the army is very high because our president is in Kyiv, our prime minister and parliament is here. This is very important to support people on the ground, to support the Ukrainian army and this is a very good signal to the international community,” Lubkivsyi said.

President Joe Biden told American troops on a deterrence mission near the border with Ukraine that the consequences of the raging conflict 50 miles away could extend around the world.

"What's at stake (is) not just what we're doing here in Ukraine to help the Ukrainian people and keep the massacre from continuing, but beyond that what's at stake is what are your kids and grandkids going to look like in terms of their freedom?" Biden told US service members from the 82nd Airborne Division, who have been deployed along NATO's eastern edge as a visible deterrent to Russian President Vladimir Putin.
"What you're engaged in is much more than whether or not we can alleviate the suffering of Ukraine," he went on. "We're in a new phase, your generation. We're at an inflection point."

It was a sweeping view of the war underway in Ukraine, which has jolted the west into unprecedented cooperation while sending millions fleeing their homes, mostly into Poland. Biden was able to witness both of those factors at close range during his visit to Rzeszow, which has acted as a staging area for Western military assistance to Ukraine while also serving as a waypoint for people fleeing the violence.

As Biden was arriving, anti-aircraft missiles could be seen on the grounds of the airport. Later, he met with aid workers to hear their accounts of helping alleviate the humanitarian crisis, which he said was put in motion by a leader, Putin, whom he again described as a war criminal.

Speaking during a roundtable focused on the refugee issue, Biden said he would have preferred to see the crisis from an even closer perspective but was prevented by security concerns. 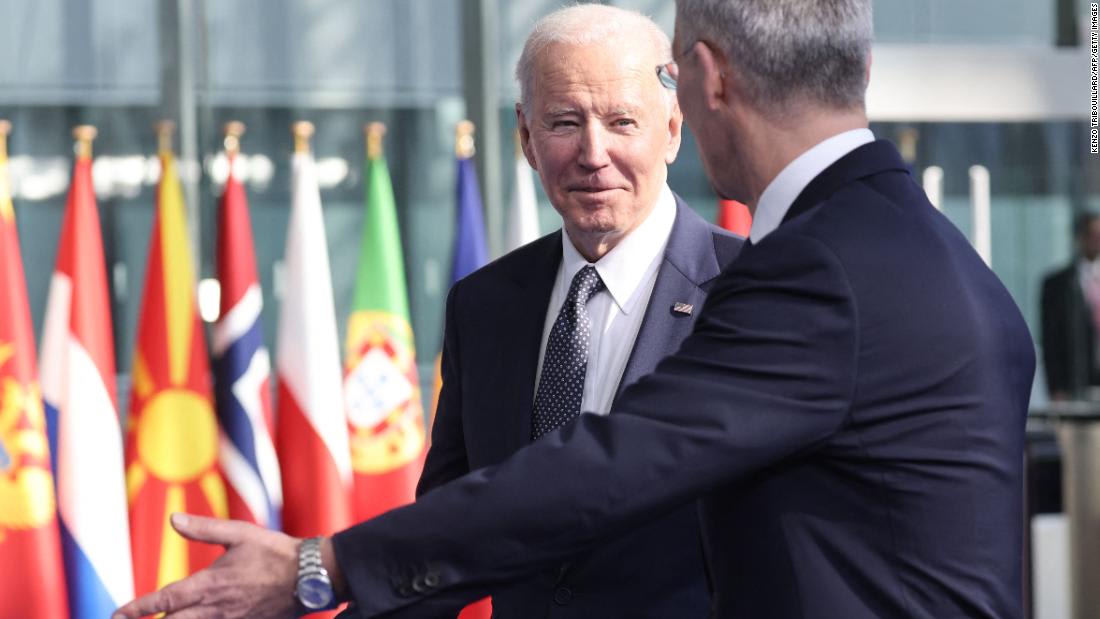 The United Nations has received “increasing information” corroborating the existence of mass graves in the besieged Ukrainian city of Mariupol, and it has been able to get “satellite information” on one such grave, said Matilda Bogner, head of the UN Human Rights Monitoring Mission in Ukraine.

"We estimate that one of those mass graves holds about 200 people," she said at a news briefing on Friday.

Bogner made this note as she painted a stark picture of a city where “the ordinary rate of mortality has increased” due to a lack of basic utilities such as food, electricity, and water.

“People are dying in the city who are not just civilian casualties,” she stressed.

A top Russian general gave some of the most detailed public remarks to date on Russia's military strategy in Ukraine, claiming on Friday that the "first stage" of Russia's military plan is now complete, with their primary focus now centered on eastern Ukraine.

"In general, the main tasks of the first stage of the operation have been completed," Colonel General Sergei Rudskoy, first deputy chief of Russia's General Staff, said in a Friday briefing. "The combat potential of the armed forces of Ukraine has been significantly reduced, allowing us, I emphasize again, to focus the main efforts on achieving the main goal — the liberation of Donbas."

Rudskoy's remarks come as Russia's advances appear to have stalled around major Ukrainian cities such as Kyiv and Kharkiv. Russia has also failed to achieve air superiority in Ukraine and has suffered heavy losses of personnel since the start of the invasion.

"The public and individual experts are wondering what we are doing in the area of ​​the blockaded Ukrainian cities," Rudskoy said.
"These actions are carried out with the aim of causing such damage to military infrastructure, equipment, personnel of the Armed Forces of Ukraine, the results of which allow us not only to tie down their forces and prevent them from strengthening their grouping in the Donbas, but also will not allow them to do this until the Russian army completely liberates the territories of the DPR and LNR."

Rudskoy was referring to the Donetsk and Luhansk People's Republics, separatist territories in eastern Ukraine that Russia recognized on the eve of its invasion. 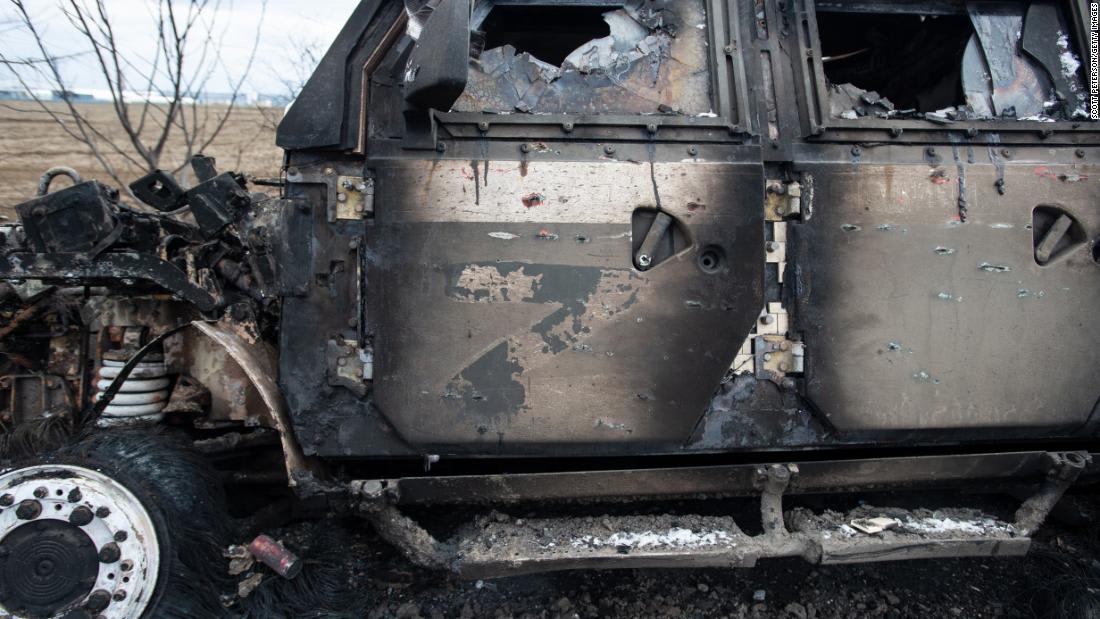 Russia says first phase of war is over

About 300 people are believed to have died in a Russian attack on a theater in Mariupol nine days ago, the city council has said, citing eyewitness reports.

The March 16 bombing of Mariupol's Drama Theater, where Ukrainian officials say up to 1,300 had sought refuge, was among the most brazen of Russia's attacks on civilians since its invasion began in late February.

Painted on the ground outside the building — in giant Russian letters — was the word "CHILDREN." The message — large enough to be viewed from the sky — was scrawled near a public square. Russia has denied its forces hit the theater, claiming instead that the Azov battalion, the Ukrainian army's main presence in Mariupol, blew it up.

Announcing the update on its Telegram channel, the city council said: "Unfortunately, we start the day with bad news. There is information, based on eyewitnesses, that about 300 people died in the Drama Theater in Mariupol as a result of a bombing by Russian aircraft.
"We still do not want to believe in this horror. We still want to believe that everyone managed to escape. But the words of those who were inside the building at the time of this terrorist act say otherwise."

CNN has been unable to independently verify the death toll. 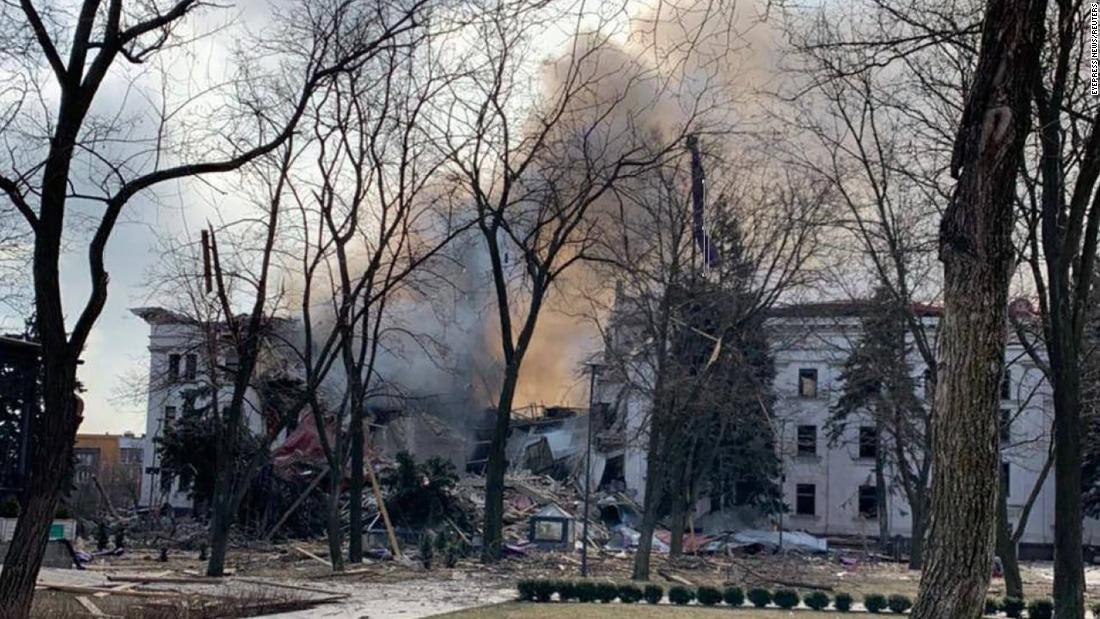 One in every two Ukrainian children has been displaced since Russia began its invasion on Feb. 24, according to a statement from the UN Children's Fund on Thursday.

UNICEF's statement added that 4.3 million children have been displaced, which represents more than half of Ukraine's estimated 7.5 million child population.

However, these figures represent those that the UN has managed to confirm, and the true toll is expected to be higher, the statement said.

"It's mind-boggling," UNICEF spokesperson James Elder told CNN earlier this week. "Since the start of the war a month ago, out of every boy and girl in the country, one out of two now has had to flee their homes.

"It's a situation we've not seen before, not in living memory, and it's almost impossible to deal with."

"Unless the war stops, unless the indiscriminate attacks stop, we're going to see more children wrenched from their homes and the bombardments," he added.