US President Joe Biden spent time with refugees in Warsaw Saturday, meeting with families who were forced to leave Ukraine.

One woman Biden spoke with told him she was there with her daughter, but her husband and son are back in Ukraine fighting.

The woman, via a translator, spoke about the horror her family has endured and said that “Ukrainian mothers are ready to strangle [Russian President Vladimir Putin] with our bare hands.”

Biden then picked up a little girl in a pink jacket and took out what appeared to be his own phone and took a selfie with her and her family there. The President said he doesn’t speak Ukrainian, but he wanted someone to tell the girl that “I want to take her home.”

“Thank you for everything,” they repeatedly told Biden.

US President Joe Biden is wrapping up his high-stakes foreign trip in Poland, where he met with Ukrainian officials and the Polish president.

Biden is meeting with Ukrainian refugees before delivering what the White House is billing as a "major address" this afternoon.

The US President, while holding talks with Polish President Andrzej Duda, said that peace in Europe is directly related to stability in the United States, adding that lack of some actions in two world wars "has come back to haunt us." Biden also called NATO's Article 5 "a sacred commitment."

The United States has made assurances that there will be additional defense support for Ukraine, Ukrainian Foreign Minister Dmytro Kuleba said.

Biden's trip comes off the heels of a series of emergency summits this week in Brussels.

After those summits, Biden said he supported ejecting Russia from another summit, the Group of 20, which is scheduled to convene in November, though other members of that grouping would have to sign on. And he issued a vague warning that the United States would respond to potential chemical weapons use on the battlefield.

But he maintained his view that direct US military intervention in Ukraine would result in catastrophe and defended a sanctions regime that so far has not stopped Russian President Vladimir Putin from intensifying his assault.

"I asses my & @DmytroKuleba meeting with @POTUS, @SecDef, @SecBlinken with cautious optimism," Reznikov said in a tweet, adding there is "mutual struggle with a common enemy."

Reznikov said he and Foreign Minister Dmytro Kuleba discussed with the US officials "urgent needs" of the Ukrainian army.

Reznikov and Kuleba met with the US officials in Warsaw earlier Saturday, where Kuleba said the US promised additional defense support for Ukraine.

US President Joe Biden met with chef José Andrés and volunteers in Warsaw Saturday at a food distribution site for Andrés’ World Center Kitchen, the nonprofit devoted to providing meals in the wake of disasters.

Biden met with some of the volunteers, some of whom are from Europe and the United States.

“God love ya,” the President could be heard saying to them while asking if he could help them.

An ambulance that was donated and blessed by Pope Francis is on its way to the western Ukrainian city of Lviv, according to the Holy See press office.

Cardinal Konrad Krajewski, the papal almoner, on Saturday left for Lviv and will make the approximately 18-hour drive to give the vehicle to authorities in Lviv in an effort to provide relief to the city. Lviv has seen a stream of internally displaced Ukrainians arriving from the east.

On Thursday, the Pope issued strong criticism against countries for increasing military spending as Russia’s onslaught of Ukraine continues, branding it “madness.”

Speaking to an audience with the Italian Women’s Center in Rome, Pope Francis blamed the “shameful” war in Ukraine on the “old logic of power that still dominates the so-called geopolitics.”

On Wednesday, Ukrainian President Volodymyr Zelsenky appealed to the Pope to visit the country, thanking the Pontiff for his "clear and strong position against the war” during an address Tuesday that was posted on the Ukrainian government’s Facebook page.

The United States has made assurances that there will be additional defense support for Ukraine, Ukrainian Foreign Minister Dmytro Kuleba said on Saturday.

"Today we did receive additional promises from the United States on how our defense co-operation will evolve," Kuleba told reporters in Warsaw, stressing that "no other country provided Ukraine with more support than the United States."

"Ukrainian stamina and Western weapons, mostly American weapons, is the recipe for success on the battleground," Kuleba said.

"We see that the United States are keen to move on with further sanctions," Kuleba also said.

"We have some European countries who need to be convinced and who need to be taken on board as well, so we agreed today with my counterpart, Secretary Blinken, on how we will be working together with them," the foreign minister added.

Ten corridors in the Kyiv, Luhansk and Donetsk regions were agreed upon Saturday to evacuate civilians from settlements affected by the Russian invasion, according to Ukraine's Deputy Prime Minister Iryna Vereshchuk.

In the southeast, private transportation is planned for people from the besieged city of Mariupol to Zaporizhzhia, but due to the blockade of buses by Russian forces at checkpoints, there won't be a centralized evacuation of Mariupol residents on Saturday, according to Vereshchuk.

"Slavutych, Dymer, Ivankiv - we hear you and we know that you need routes (for evacuation). We are working on it," according to Vereshchuk.

In the southern city of Kherson, Vereshchuk said residents are actively and "massively" protesting the occupation.

US President Joe Biden, while holding talks with Polish President Andrzej Duda, said that peace in Europe is directly related to stability in the United States, adding that lack of action in two world wars "has come back to haunt us."

"America's ability to meet its role in other parts of the world rests upon a united Europe, a secure Europe. We've learned from sad experience in two world wars, when we've stayed out of and not been involved in stability in Europe, it always comes back to haunt us, the United States," Biden said.

"So I've been saying for a long time, as a senator who visited here, a member of the Foreign Relations Committee, as vice president for eight years, now as President, that stability in Europe is critically important to the United States in terms of our interest. Not only in Europe, but around the world," he continued.

Biden also said that he and US leaders see NATO's Article 5 as "a sacred commitment."

"The single most important criterion in this time-changing world ... is that NATO stay absolutely, completely, thoroughly united. There be no separation in our points of view. That whatever we do, we do in unison, and everyone — everyone — comes along," he said.

The US President also acknowledged the strain of Ukrainian refugees upon Poland, referencing the situation at the US-Mexico border.

Here's what you need to know about Saturday's developments in the war in Ukraine.

In a video address on Friday, Ukraine's President Volodymyr Zelensky said the country's military had dealt "powerful blows" to Russia.

On the ground: Russian troops have entered the city of Slavutych, north of Kyiv — a move that sparked protests among hundreds of Ukrainian civilians. Slavutych was built for workers at the Chernobyl nuclear plant after the 1986 disaster left the area uninhabitable.

Meanwhile, Ukrainian forces have staged a counteroffensive in areas around Ukraine's second-largest city of Kharkiv, according to local officials. 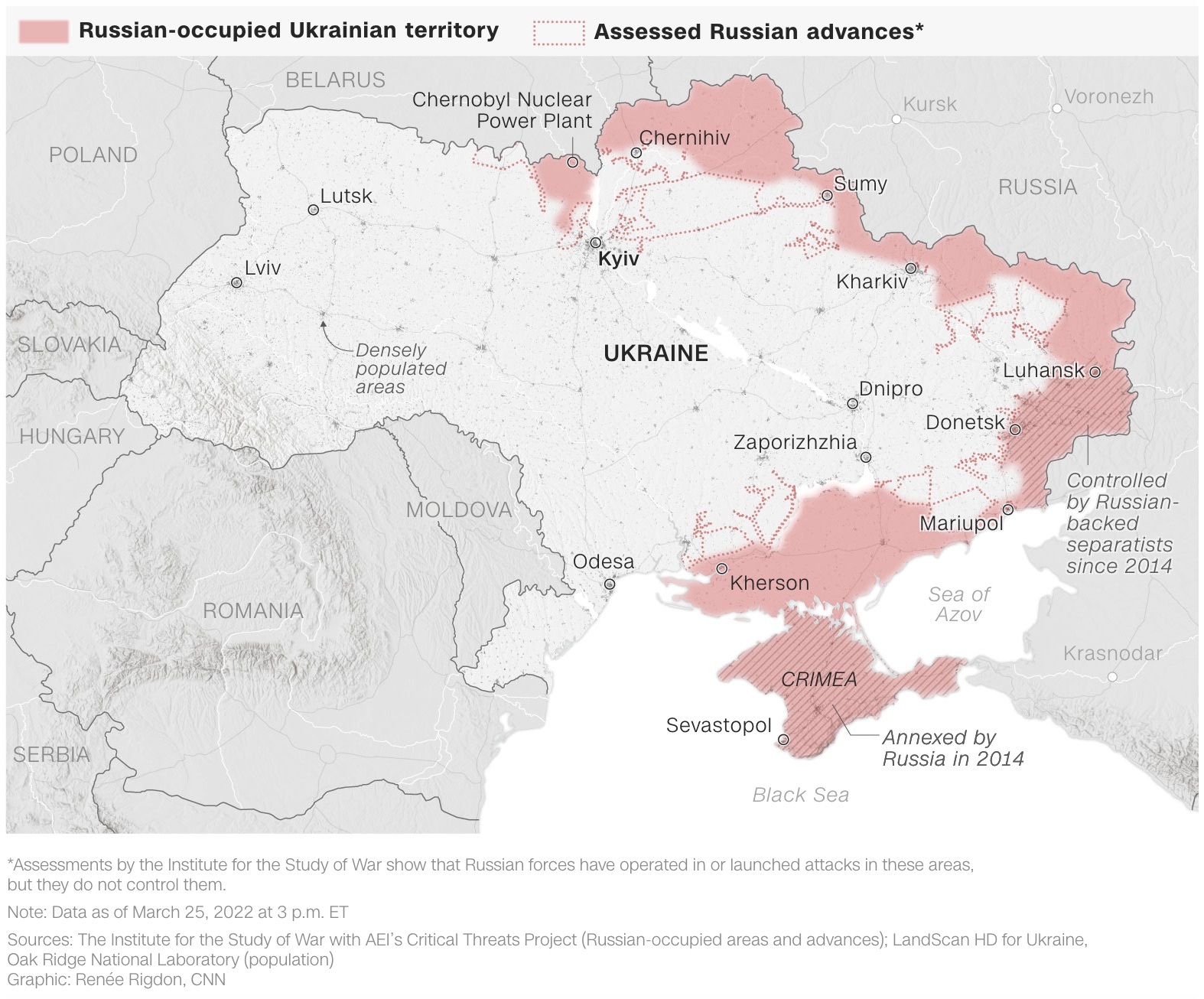 Biden in Poland: After meeting with Ukrainian officials in Warsaw, US President Joe Biden is now holding talks with Polish President Andrzej Duda.

Biden is set to meet with Ukrainian refugees and will give a "major address" later in the day, according to the White House.