The Kremlin has confirmed that Russian tycoon Roman Abramovich has taken part in Russian-Ukrainian negotiations, amid media reports that Abramovich had surfaced as an interlocutor in facilitating potential peace talks.

In a conference call Thursday, Kremlin spokesperson Dmitry Peskov said Abramovich "did take part in the negotiations at the initial stage, that is true."

Pressed further, Peskov gave few details, but added: "And now the negotiations are going on between the two negotiating teams – Russian and Ukrainian."

Peskov was answering a question regarding an article in The Wall Street Journal that reported that the Biden administration held off on sanctions on Abramovich at the urging of Ukrainian President Volodymyr Zelensky, because of the oligarch's role in potentially negotiating peace. CNN has not independently confirmed such a discussion between Washington and Kyiv and Peskov provided no additional information.

It is unclear what role at this stage Abramovich is playing in prospective negotiations between Ukraine and Russia.

At least 136 children have died and 199 have been injured in Ukraine since the invasion started just over a month ago, according to a statement released Saturday by the Ukrainian prosecutor general's office.

The statement said a 9-year-old, 11-year-old and 13-year-old were all killed in the past week from shelling by the Russian military.

At least 64 of those killed were in Kyiv, according to the statement, adding that 570 educational facilities have also been damaged, with 73 completely destroyed.

CNN cannot independently verify these figures and the prosecutor general's office said: "These data are not conclusive, as it is not possible to inspect the sites of shelling in areas of active hostilities and in the temporarily occupied territories."

As China faces criticism and pressure from the West for not denouncing Russia’s invasion of Ukraine, a senior Chinese diplomat traveled to Moscow to meet with Russian officials, including Foreign Minister Sergey Lavrov on Saturday.

Liu Xiaoming, China’s representative on Korean affairs said via Twitter he had “in-depth discussions on the Korean Peninsula situation and international issues of mutual concern.”

The Chinese envoy’s visit comes on the heels of North Korea confirming it tested a new type of intercontinental ballistic missile, which represented its first long-range test in more than four years, marking a potential new era of regional confrontation as well as raising concerns with its neighbors including Russia and China.

In a statement on Telegram, Oleh Syniehubov, the head of the Kharkiv regional administration, said, "We are not only defending our positions, but also liberating our temporarily occupied land. Several settlements were liberated, and fighting for our territories is underway in the direction Rohan. Fighting also continues in the Izium direction and Chuhuiv direction."

CNN could not immediately verify that claim. Kharkiv, in northeastern Ukraine, has come under intense shellfire since Russian forces invaded in late February.

Syniehubov said the city "was shelled only 24 times overnight. Which now can be considered a relatively small amount."

Kostiantyn Nemichev, a far-right Kharkiv politician and member of the nationalist Azov battalion, said "Yesterday was very productive day, and a few settlements were liberated," and posted pictures of what purported to be Russian prisoners of war.

US President Biden is huddling with senior Ukrainian officials in Warsaw on the final day of his trip to Europe.

At a hotel in the Polish capital, Biden dropped by a meeting between Foreign Minister Dmytro Kuleba and Defense Minister Oleksii Reznikov and their American counterparts, Secretary of State Antony Blinken and Defense Secretary Lloyd Austin.

During a short photo-op, the group made small talk about the arduous journey the ministers took from Ukraine to Poland, which included a train ride followed by three hours in a car.

"It’s like flying from Kyiv to Washington with a connecting flight in Istanbul," Kuleba said.

"The good thing is that since the beginning of the war I’ve learned how to sleep under any conditions. So I slept on the train, I slept in the car," he went on.

Biden latched onto the idea the ministers had traveled by train, and relayed that he, too, had experience of rail travel.

"You’re looking at a fellow who’s traveled over a million, 200,000 miles on a train. Literally," Biden said.

"So you learned how to sleep," one of the ministers replied.

"I learned how to sleep," Biden said. "I even learned how to become friends with a conductor so they kept the people away. You didn’t have to worry about that."

Reporters were told to leave the room before any questions of substance about the war in Ukraine could be answered.

In a statement released on Saturday, Russian Ministry of Defense spokesperson Igor Konashenkov said sea-launched Kalibr cruise missiles "destroyed a warehouse with ammunition and weapons near the settlement of Velyki Korovyntsi, Zhytomyr region."

Konashenkov continued: "Also, a high-precision Onyx cruise missile destroyed a fuel base in the Mykolaiv area, which supplied the AFU [Armed Forces of Ukraine] grouping in the southern part of Ukraine with fuel."

The mayor of Kyiv, Vitali Klitschko, on Saturday announced a new curfew in the Ukrainian capital.

In a statement on Telegram, Klitschko said the curfew would begin Saturday at 8 p.m. and last until 7 a.m. on Monday.

"According to the decision of the military command, the curfew in Kyiv and the region will be strengthened again," he said.

Klitschko said only vehicles with special permits can operate during the curfew and that residents of the city can only go out to shelters when an alarm sounds.

Public transport, shops, pharmacies and filling stations will not be operational, he said.

Russian troops have entered the city of Slavutych, north of Kyiv -- a move which has sparked protests among hundreds of Ukrainian civilians.

The mayor of Slavutych, Yuri Fomichev, asked residents to come to the city square with Ukrainian symbols to "show their position."

Images and video geolocated by CNN showed a crowd -- possibly several hundred people -- chanting "Slavutych is Ukraine" and "Glory to Ukraine" in the main square. A large Ukrainian flag was unfurled.

The sound of at least three stun grenades, whose origin is unclear, can be heard.

Later, as the crowd moves through the square, several bursts of heavy gunfire can be heard.

Pavliuk also said that "according to the latest information, the mayor Yuri Fomichiv was abducted by invaders."

Late on Friday, the mayor had issued a statement on Facebook saying that: "Our defenders defended bravely and selflessly! But we do not have equal strength! Unfortunately, we have our dead."

Some background: The arrival of Russian forces in Slavutych follows several days of shelling against the city, which is strategically located close to the Dnieper River, about 95 miles (150 kilometers) north of Kyiv and close to the border with Belarus.

Slavutych was built for workers at the Chernobyl nuclear plant after the 1986 disaster left the area uninhabitable.

Russia's Defense Minister Sergei Shoigu held an official meeting on Saturday, state media reported, amid speculation over his whereabouts and health during the ongoing invasion of Ukraine.

State news agency Tass said Shoigu met with the country's Ministry of Finance to discuss maintaining the supply of advanced weapons for the conflict.

Those items include "robotic complexes, information support and electronic warfare equipment, and of course, logistics, as it has always been the case,” Shoigu said, according to TASS.

"With the challenges we are facing today, we are moving according to plan in implementing the state defense procurement contract," Shoigu said. "Considering the fact that the government funding for this year is 15% higher than for the previous year, we must of course take a look at what needs particular attention when fulfilling the state defense procurement contract.”

Shoigu reportedly claimed that despite sanctions on Russia, the level of execution of state contracts is at 85%. Outside observers have expressed skepticism that Russia can continue to produce high-tech weaponry amid severe international sanctions, particularly if procurement of some technology by Russia is restricted.

In addition, Shoigu spoke about legal changes that would guarantee government support to Russian troops who have fought in Ukraine, TASS reported.

"According to these amendments, participants of the special military operation in Ukraine acquire the status of combat veterans. Support will also include relatives of this category of military service members," he said.

According to a separate report from TASS, Russian President Vladimir Putin signed the law on Saturday. It had been "unanimously" adopted by the State Duma and approved by the Federation Council on Wednesday.

The new law means that those who have taken part in Russia's military operations in Ukraine, will have access to the "social protection system used by veterans of Afghanistan, Syria, and other hot spots," which includes additional payments from the state, tax benefits and medical care, the Russian state media outlet reported.

The bigger picture: Speculation has been mounting over Shoigu's whereabouts in recent days, as the Defense Minister has kept a low profile in the last few weeks despite having a leading role in Russia's invasion of Ukraine.

On Thursday, Kremlin spokesman Dmitry Peskov declined to comment on media reports and speculation that Shoigu had been experiencing health problems.

"The defense minister has a lot on his plate at the moment," he said when CNN asked about Shoigu's reported absence. "The special military operation is going on. Naturally, now is not exactly the time for media activity, this is quite understandable." 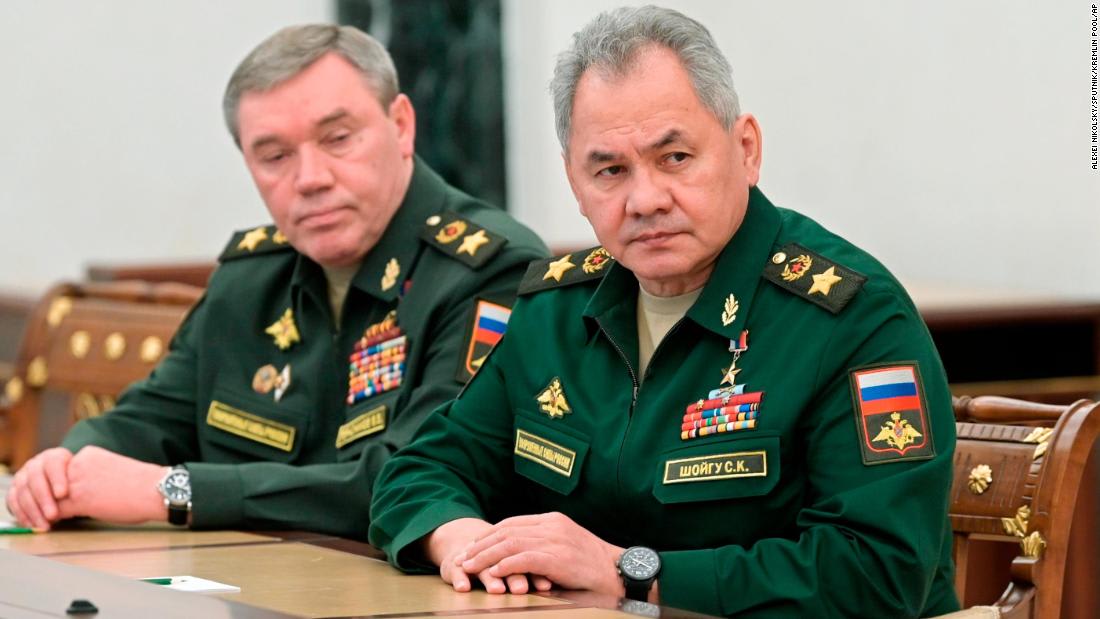