Ukraine's deputy defense minister said Monday that Russian forces were attempting to establish a "corridor" around the Ukrainian capital to block supply routes, amid continued fighting around Kyiv's suburbs.

"The defense of Kyiv continues. Ground forces, Air Assault Forces, special operations forces, territorial defense are involved. Kyiv residents are also very active in the defense of Kyiv. It is very difficult for the enemy. But we must speak honestly: the enemy is not letting up attempts to seize Kyiv after all. Because taking Kyiv essentially means taking Ukraine. So that is their goal."

The Kyiv regional military administration said in a statement Monday that areas around the western suburbs of Bucha, Irpin, Hostomel and Makariv as well as the route from and to the city of Zhytomyr to the west and areas north of Vyshhorod remained very dangerous and prone to shelling by Russian forces.

"Over the past 24 hours, there have been more than 40 incidents of shelling by Russian troops of housing estates and social infrastructure," the statement said.

A CNN team visited Novi Petrivtsi, a town north of Vyshhorod on Sunday, and saw first-hand the damage done by Russian artillery. Several houses had been completely destroyed. Residents and local authorities reported near-daily explosions in the area.

Biden said on Saturday during a visit to Poland that Putin should no longer remain in power.

But the Kremlin issued its own affronted response, saying Russia's ruler is "not to be decided by Mr. Biden."

"These statements are certainly causing concern," Peskov said Monday on a regular conference call with journalists when asked about Biden’s comments.

At least five people were reportedly injured over the weekend after at least two missiles struck Lviv, a city in western Ukraine that had been previously spared the worst of Russia's brutal onslaught, local officials said.

One of the strikes hit a fuel storage facility, causing it to catch fire, and a later strike caused "significant damage" to the city's infrastructure facilities, according to the city's mayor, Andriy Sadovyi.

For a better sense of the situation on the ground, we posed a few questions to CNN's John Berman, who's been covering the invasion from Lviv. His responses, sent via email on Sunday, are below:

WHAT MATTERS: Can you describe how people in Lviv are behaving at this moment?
BERMAN: We went out to one of the main squares today, less than 24 hours after a series of Russian missile strikes, and it was packed. So many people out enjoying the beautiful weather and street music and food.
It was astounding. Their reasons for being there were twofold. Some people told us it was their way of showing Putin that they can't be intimidated. But the majority of people we spoke with were actually from different parts of the country, and, frankly, they have seen worse. So the missile strikes here did not scare them, at least not as much as the things they have lived through in Kharkiv or Sumy or Kyiv. 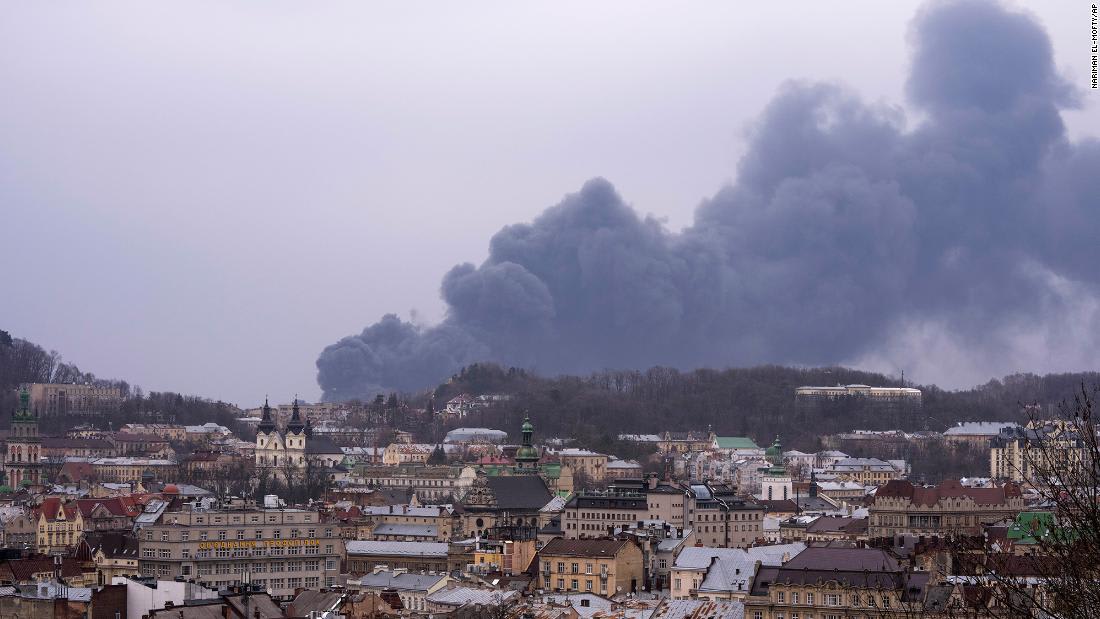 Analysis: 'This invasion is horrifying': On the ground in Lviv following Russian missile attacks

Kyiv Mayor Vitali Klitschko on Monday announced a slight easing of the curfew in the Ukrainian capital.

Local authorities previously announced schooling in the capital would resume in an online format Monday. Klitschko also canceled a plan for an extended curfew over the weekend.

Some background: Ukraine’s military intelligence head said Russian President Vladimir Putin could be looking to carve Ukraine in two – like North and South Korea. Russia’s operations around Kyiv had failed and it was now impossible for the Russian army to overthrow the Ukrainian government, he said.

Strikes continue: A loud explosion followed by sirens were heard in Kyiv early Monday, according to CNN teams on the ground. Shelling intensified around the city on Monday morning, the teams said.

Most of Russia’s military gains near Mariupol are in the southern areas, according to the UK’s latest intelligence update.

"Russia has gained most ground in the South in the vicinity of Mariupol where heavy fighting continues as Russia attempts to capture the port," the UK Ministry of Defence said on Twitter Monday.

Further to its report, the ministry said there was "no significant change to Russian Forces dispositions in occupied Ukraine."

"Ongoing logistical shortages have been compounded by a continued lack of momentum and morale amongst the Russian military, and aggressive fighting by the Ukrainians," it continued.

Some background: Mariupol has been a primary target for the Russians due to its strategic port, and has been destroyed by constant bombardment since the invasion began.

Ukrainian President Volodymyr Zelensky on Sunday called the Russian siege of the port a "humanitarian catastrophe," claiming that Russian forces had taken more than 2,000 children out of the city as part of what Ukrainian officials have described as a wave of civilian deportations to Russia.

"Last night there were two very powerful explosions near Zhytomyr," said Serhii Sukhomlyn, mayor of the city in west-central Ukraine.

"People were frightened because the houses were actually shaking as if in an earthquake. The blow was not inflicted on Zhytomyr itself, but near the city. Now the situation in Zhytomyr is more or less calm," he said.

The head of the Volyn regional military administration in western Ukraine, Yuriy Pohuliaiko said a missile struck a fuel depot and had been fired from neighboring Belarus, according to the military. Belarus has been a base and staging area for Russian military forces.

"I just got back from the scene," Yuriy Pohuliaiko said in a post on Telegram. "I want to inform you that rescuers are still working at the site of the missile strike. As of now, there are no victims."

The missile flew at a low altitude, eluding detection by radar, he said.

Some context: The Russian military has targeted fuel supply points around Ukraine in recent days, with Russia confirming strikes on fuel depots in Lviv and outside of Kyiv Saturday.

International companies that left Russian markets will be given a “Peace Award” from Ukrainian President Volodymyr Zelensky, his presidential office announced Sunday.

The companies that departed "deserve the respect of Ukrainians and people around the world. After all, indifference and silence are complicity," said Andriy Yermak, head of the Office of the President.
“Our goal is not a single penny to the budget of the aggressor country."

Yermak called on other companies to "make the right choice."

"It is impossible to support war crimes, it is inadmissible to conduct trade with war criminals and make money on the killing of civilians," he said.

Some context: Since the invasion, many international corporations have ceased business within Russia across a multitude of industries, including energy, transportation, finance and technology.

In an address to the French parliament last week, Zelensky called for several business giants in France to leave the Russian market and "stop being the sponsors of Russia's war machine." 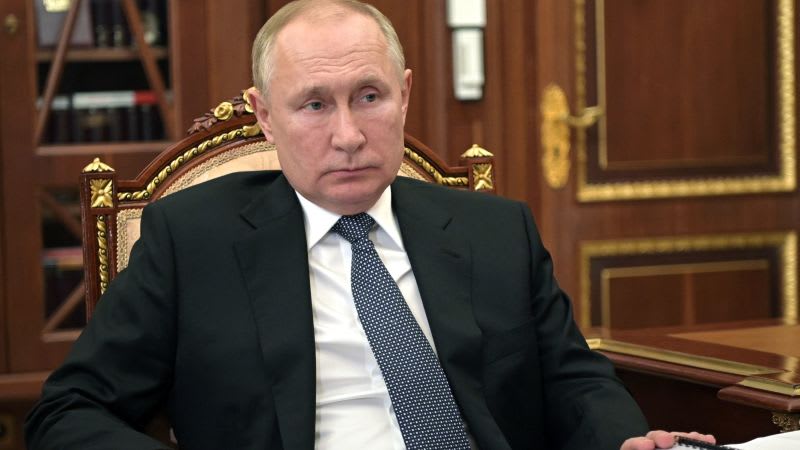 Ukrainian President Volodymyr Zelensky reacted to Russia's attempt to censor his interview with independent Russian journalists, saying Moscow was "frightened" by journalists "who can tell the truth."

"Strong people of our strong country, today is the day when I’m convinced over and over again how far we are from the Russian Federation," Zelensky said in his latest video address Sunday.

"Just imagine, they were frightened in Moscow because of my interview with Russian journalists. Those of them who can tell the truth."

"(They) destroyed freedom of speech in their state, (and are) trying to destroy the neighboring state. They portray themselves as global players. And they themselves are afraid of a relatively short conversation with several journalists," Zelensky said.
"Well, if there’s such reaction, then we are doing everything right. Means they are nervous."

The lengthy video interview, posted in full on Zelensky's Telegram channel, featured questions from some of Russia's most prominent independent journalists, including author Mikhail Zygar and Tikhon Dzyadko, the editor-in-chief of the recently shuttered channel TV Rain.

US President Joe Biden's suggestion in Poland on Saturday that Russian President Vladimir Putin's onslaught on Ukraine should disqualify him from power triggered an international political storm.

Back in Washington Sunday evening, Biden told reporters that he was not calling for regime change in Russia — echoing a message spelled out multiple times by his subordinates even before he had returned to the US.

But the global reverberations from the remarks leave the administration facing grave questions.

Some are strategic and could impact the future course of the war and so-far elusive hopes for a ceasefire. Others are political and relate to Biden's standing at home, amid a torrent of Republican criticism, and internationally, as he seeks to keep the Western coalition together. 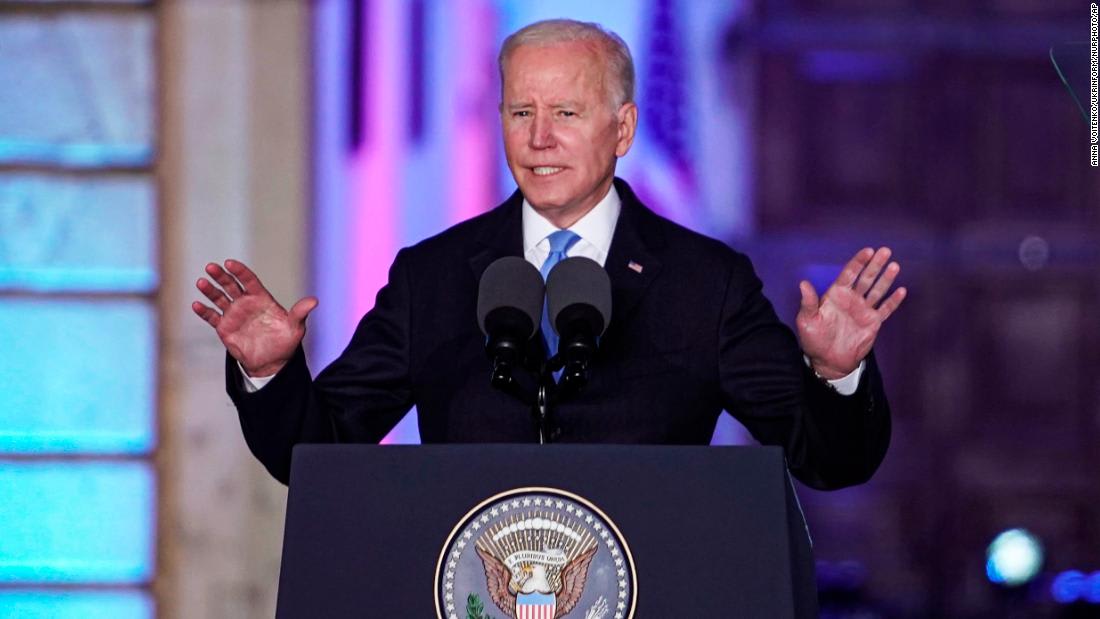 Analysis: How Biden's 9 unscripted words could impact the war in Ukraine