US troops in Poland have been providing Ukrainians with some instruction on how to use weapons and equipment that the West has been shipping into Ukraine, sources familiar with the matter tell CNN, as part of the United States' efforts to help Ukrainian forces repel Russian attacks.

US President Joe Biden said on Monday that those American forces have been “helping train the Ukrainian troops” in Poland. The troops have been deployed there to help bolster NATO’s eastern flank during Russia’s invasion of Ukraine.

While in Poland last week, Biden heard directly from the troops about how they were providing the tactical weapons training to the Ukrainians there, the sources said.

"We were talking about helping train the Ukrainian troops that are in Poland,” Biden said on Monday. He was seeking to clarify a remark he made last week to US troops that they would be seeing “when you’re there … women, young people, standing in the middle of the damn tank, saying 'I’m not leaving. I’m holding my ground.’”

A White House official told CNN “there are Ukrainian soldiers in Poland interacting on a regular basis with US troops, and that’s what the President was referring to.”

Sources told CNN that while US troops are indeed providing some instruction to the Ukrainians at a military base in Poland, it does not amount to “formalized” training.

Rather, the coaching is more tactical and in-the-moment, the sources said, like showing Ukrainian soldiers who are picking up the weapons shipments in Poland how to use some of the equipment, such as Javelin anti-tank missiles that the West has been sending in large numbers. Poland has become the central transit point of arms transfers into Ukraine.

NATO Supreme Allied Commander Gen. Tod D. Wolters told US lawmakers on Tuesday that the US had been providing “advice and assistance with respect to materiel” going into Ukraine, but that the US forces are not “in the process of currently training military forces from Ukraine in Poland.”

“There are liaisons that are there that are being given advice, and that is different than what I think you are referring to with respect to training,” Wolters told Republican Sen. Tom Cotton when asked about the training.

Wolters said separately during the hearing that “as you well know, we’ve made dramatic improvements in our information sharing and intelligence sharing, and as [the Ukrainians] continue to pursue their campaign, our advice and our assistance with respect to material will be very, very important,” Wolters said.

Britain does not want to see anything less than a “complete withdrawal” of Russian forces from the Ukrainian territory and will judge Russia by its actions rather than words, Prime Minister Boris Johnson’s spokesperson said Tuesday.

The British government acknowledged that there has been a reduction in Russian bombardment around Kyiv, the spokesperson added.

Russian presidential aide Vladimir Medinsky said Tuesday the announcement of plans for a de-escalation by the Russian military around Kyiv and Chernihiv "is not a ceasefire."

In remarks to Russian state-owned channel RT, Medinsky said the first step agreed by Russia in talks with Ukraine "concerns a gradual military de-escalation in two main directions — Kyiv and Chernihiv," adding, "we understand that there are people in Kyiv who need to make decisions, so we do not want to expose this city to additional risk."

Gen. Tod Wolters, commander of US European Command, said there “could be” an intelligence gap in the US’ intelligence gathering that caused the US to overestimate Russia’s capability and underestimate Ukraine’s defensive capability in the current Ukraine crisis.

Wolters made the comments during a Senate Armed Services Committee hearing on Tuesday.

When Sen. Roger Wicker, a Republican from Mississippi, asked if there was an intelligence gap that caused the US to overestimate Russia and underestimate Ukraine, Wolters said “there could be.”

“There could be and as we’ve always done in the past, when this crisis is over with, we will accomplish a comprehensive after-action review in all domains and in all departments and find out where our weak areas were and make sure we can find ways to improve, and this could be one of those areas,” Wolters said.

On Ukrainian advances: Wolters said he believes Ukrainian forces will be able to stall the Russians in the east of the country, but not that he believed they could push the Russian forces back.

He also said that 70% to 75% of Russia’s forces are “devoted” to the Ukrainian invasion “from a Russian perspective at this time.”

Secretary of State Antony Blinken said that he has not seen signs the talks between Ukraine and Russia are “moving forward in an effective way” because the US has not seen “signs of real seriousness” by Russia.

Blinken cautioned that Russia saying it would be reducing hostilities around Kyiv could be “a means by which Russia once again is trying to deflect and deceive people into thinking it’s not doing what it is doing.”

Blinken called for Russia to “end the aggression now, stop firing, pull its forces back and of course engage in talks.”

Ukraine and a number of non-NATO countries have been invited to attend part of a two-day meeting of NATO foreign ministers next week, according to a statement from the military alliance headquartered in Brussels.

NATO said “the Ministers of Foreign Affairs of Australia, Finland, Georgia, Japan, the Republic of Korea, New Zealand, Sweden and Ukraine, as well as the High Representative of the European Union for Foreign Affairs” will attend one session of the meeting on April 7.

Some of ministers “may attend via video link,” the statement added.

Foreign ministers from the 30 NATO countries will convene for the second time since Russia’s invasion of Ukraine. The session follows last week’s high-level meeting of NATO leaders for an extraordinary summit on the crisis.

US President Joe Biden’s call with European allies to discuss the latest developments regarding Russia’s invasion of Ukraine has ended, the White House said.

After delegations from Russia and Ukraine met for in-person talks today in Istanbul, Russia announced a a "drastic reduction in military activity in the Kyiv and Chernihiv directions."

Evacuation corridors: Local officials are working to evacuate people living in towns suffering heavy Russian shelling despite the failure of fighting parties to formally agree a humanitarian corridor, the regional governor of Luhansk in Ukraine’s far east said. Thirty people had been moved out of Rubizhne on Tuesday morning, as well as people from other nearby towns, Gov. Serhii Haidai said.

The Ukrainian government said residents of Mariupol, Melitopol and Enerhodar are once again able to reach the city of Zaporizhzhia, which remains in Ukrainian hands and has become the key transit point for people looking to escape fighting in the southeast. This comes after Ukraine said Monday that no corridors would function over fears of possible "provocations" by Russian forces.

Ukraine counterattacks: Military officials say Ukraine has launched counteroffensives against Russian forces in the Kyiv region as well as in the south of the country. Russian forces have been struggling to hold their front line northwest of the city of Kherson, and Ukrainian officials say the military has also pushed Russian troops back around 31 miles (50 kilometers) in fighting near the city of Kryvyi Rih.

Here's a look at the map of Ukraine as it stands amid the Russian invasion: 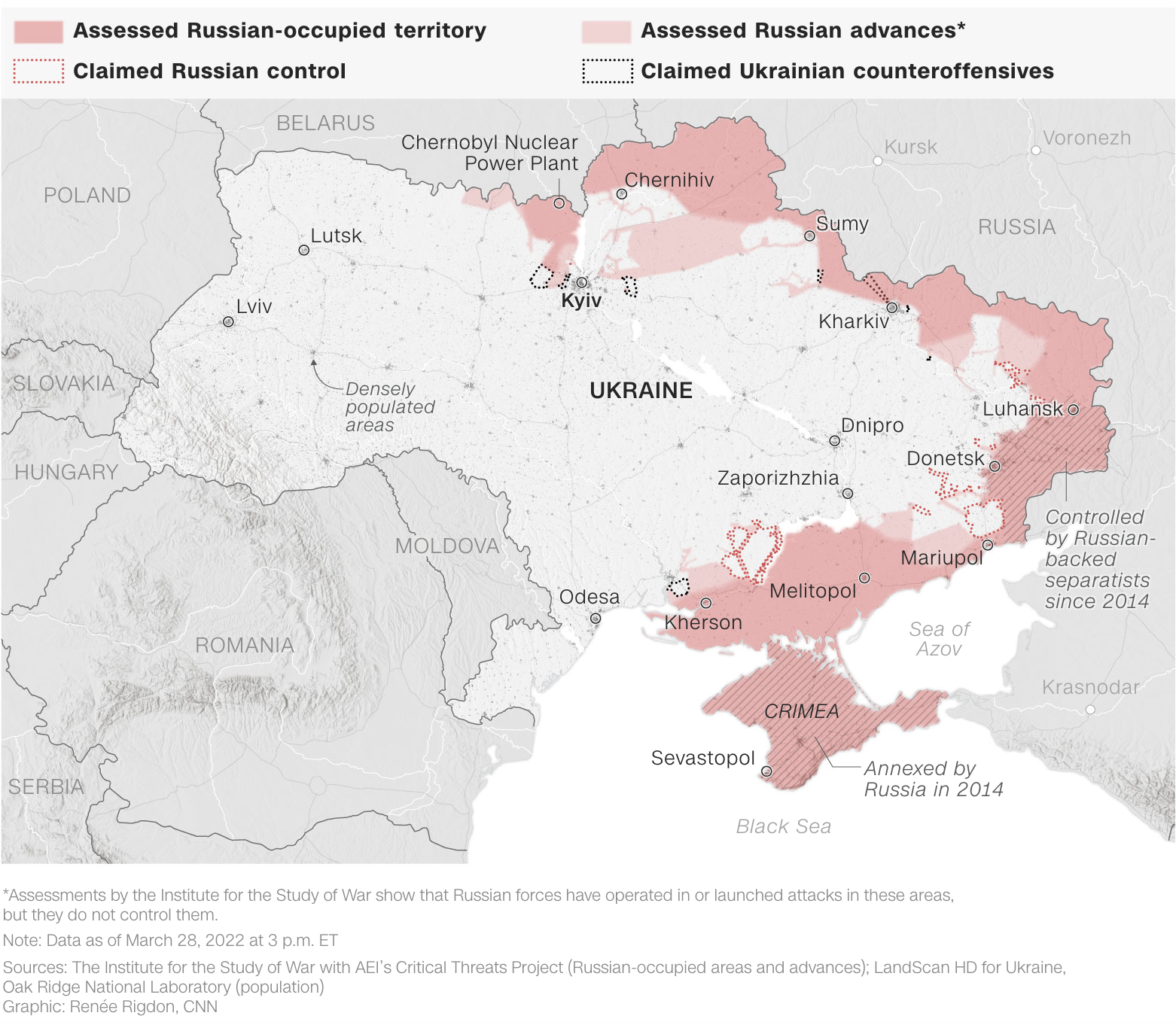 More than 3.9 million people have fled Ukraine since the start of the Russian invasion began in late February, the United Nations High Commissioner for Refugees said Tuesday.

The 3,901,713 refugees registered as of Monday include 203,000 third-country nationals, according to the International Organization for Migration.