Polish Prime Minister Mateusz Morawiecki told CNN on Thursday that he believes Russian troops will "quite soon" aim to capture one-third of the land in Ukraine and that Moscow will use it to strengthen its negotiating hand.

“I see the Russian troops regrouping, reorganizing. I think that they will try to surround the Ukrainian forces quite soon — in the Donbas region in particular. And then having captured one-third of the land in Ukraine, they will want to negotiate from this … very strong position,” the prime minister told CNN’s Christiane Amanpour in an exclusive interview.

In a virtual address to the Australian parliament on Thursday, Ukrainian President Volodymyr Zelensky called for further sanctions on Russia and warned of great implications to global security if Russia isn’t stopped.

Moscow is “fearful of long-term sanctions,” he told CNN. “We are advocating for confiscating their assets, and doing everything possible to stop buying Russian oil and gas.”

Despite the fact that Western allies have already imposed harsh sanctions, the prime minister warned that the price of the Russian ruble remained largely stable and that it was proof that “for the time being, Putin and his people were able to change the fiscal policy, monetary policy, financial policy in such a way that they are immune to the sanctions to some extent ... at least for the next several months.”

“For the next weeks and the next couple of months, Russia is prepared for this war. I’m not so sure if the West, if the United States, the European Union and NATO are as prepared. … Our public opinion will get tired of this war,” he said.

Morawiecki also warned that while the “Ukrainians are fighting with lionhearts,” the West needs to urgently increase its supply of weaponry into the country, making a direct appeal to the United States to "act quickly, please act quickly as they [Ukraine] are fighting for our values, our universal values."

“We have to help Ukrainians to defend their country as quickly as possible. Our days is their hours, our weeks [are] their days; they need weapons here and now. … Russia is a big country, a big country of lots of commodities, raw materials, resources … They have a big army. This is why they can again and again regroup and reorganize,” he added.

Russian forces continue to focus their strikes on Ukraine in four areas, including the capital city of Kyiv, a senior US defense official told reporters Thursday.

According to the official, the airstrikes Russians are launching are focused on:

“We have seen the Russians continue to increase their number of sorties, aircraft sorties, in the last 24 hours up over 300, and their strikes are focused on Kyiv, Chernihiv, Izyum which we’ve talked about before, to the south of Kharkiv, and then that joint force operation area, basically the Donbas, those are sort of the four areas where they are conducting most of their strikes,” the official said.

The official stressed “Kyiv is still very much under threat from airstrikes,” despite Russia’s comments about pulling back from the area.

German and French economic ministers said Thursday that they were committed to existing agreements with Russia on making the payments for Russian gas supplies only in euros.

“We will not accept the method of payment for [Russian] gas in any other currency than stated in the contract,” Le Maire added.

Russian President Vladimir Putin said Thursday that according to a newly signed decree regarding natural gas trading with “unfriendly countries,” companies will need to have accounts in Russian banks and pay for contracts in rubles.

At a separate news conference Thursday, Habeck said that Germany is “prepared” for all scenarios, including a stoppage of Russian gas flows to Europe, while Le Maire said France is “preparing” in case Russia cuts off gas deliveries.

“We have looked at the contracts on gas delivery and other deliveries. [The contracts state] that payments are to be made in euros, sometimes in US dollars, but mostly in euros. And I made clear in my conversation with the Russian president that this will remain as it is,” Scholz said in Berlin during a joint news conference with his Austrian counterpart Karl Nehammer.

“It is a terrible feeling to be dependent on Russian energy at the moment,” the Austrian chancellor said.

“We must secure energy supplies to make sure that the economy functions, because the gas coming from Russia is not only being used for private households but also by industries where jobs are concerned, and prosperity must be maintained,” Nehammer said.

Gazprombank has been appointed as an authorized bank that will open special accounts in rubles for gas buyers from "unfriendly countries" and will sell currency for conversion into rubles for gas payment at Moscow Exchange auctions, Russian state news agency TASS reported Thursday.

Russian President Vladimir Putin announced Thursday that according to a newly signed decree regarding natural gas trading with "unfriendly countries," companies will need to open ruble accounts in Russian banks, and payments should come from these accounts.

Putin made the comments during a virtual meeting that he was chairing to discuss measures to support Russian airlines hit by Western sanctions.

According to TASS, the Bank of Russia must determine within 10 days the procedure for opening special currency accounts for foreign gas buyers.

“In a situation when the financial systems of Western countries are weaponized and companies from these countries refuse to perform their contracts with Russian banks, companies and individuals, and when assets in dollars and euros are frozen, there is no point using the currencies of these countries,” Putin said earlier during his speech.

“We shall continue to steadily and systemically move in this direction as part of a long-term plan,” he said.

The US on Thursday targeted members of the Russian technology sector in a crackdown on sanctions evasion, the US Treasury said in a news release.

The agency said it is sanctioning “21 entities and 13 individuals as part of its crackdown on the Kremlin’s sanctions evasion networks and technology companies, which are instrumental to the Russian Federation’s war machine.”

It has also determined “that sanctions apply to the aerospace, marine, and electronics sectors of the Russian Federation,” meaning that the US can “impose sanctions on any individual or entity determined to operate or have operated in any of those sectors.”

Among the sanctioned were three employees of a Russian government institute that is accused of building hacking tools that were used in a cyberattack that forced an emergency shutdown at a Saudi petrochemical facility in 2017. The hacking incident caused alarm among cybersecurity experts because the malicious code used was specifically designed to target safety systems that protect human life.

The institute — known as the State Research Center of the Russian Federation (FGUP) Central Scientific Research Institute of Chemistry and Mechanics — has billed itself as working closely with the Russian ministry of defense, according to the US Justice department. Evgeny Viktorovich Gladkikh, one of the three institute employees who was sanctioned Thursday, has been indicted for his role in the Saudi hacking incident and for unsuccessfully targeting a US energy firm, the Justice Department announced last week.

Russia's military says it has moved on to a new phase of its so-called "special military operation" in Ukraine, claiming that it is shifting its focus to the Donbas region in Ukraine's east.

Is this regrouping of forces a feint — allowing battered Russian forces to regroup after suffering serious losses at the hands of Ukrainian defenders — or a simple face-saving measure? Is Russia actually moving troops and equipment to concentrate on Ukraine's east, where Moscow has recognized two separatist republics?

On paper, that seems to be the case. Russian Ministry of Defense spokesperson Maj. Gen. Igor Konashenkov said a "planned regrouping of troops" was underway around Kyiv and Chernihiv, one day after Russian negotiators said Moscow's forces would take steps toward de-escalation around those two cities. He said Russian forces were regrouping in order to "intensify operations in priority areas and, above all, to complete the operation for the complete liberation of Donbas."

US officials and military analysts have rightly been skeptical of Russia's claims of de-escalation, and some observers have suggested Russia's shifting military objectives are meant to conceal massive setbacks on the battlefield. But there is evidence that Russian military activity is ramping up in the east: Ukrainian officials on Thursday reported heavy shelling of a number of Ukrainian cities, particularly in the Luhansk and Donetsk regions of the Donbas and around the northeastern city of Kharkiv. 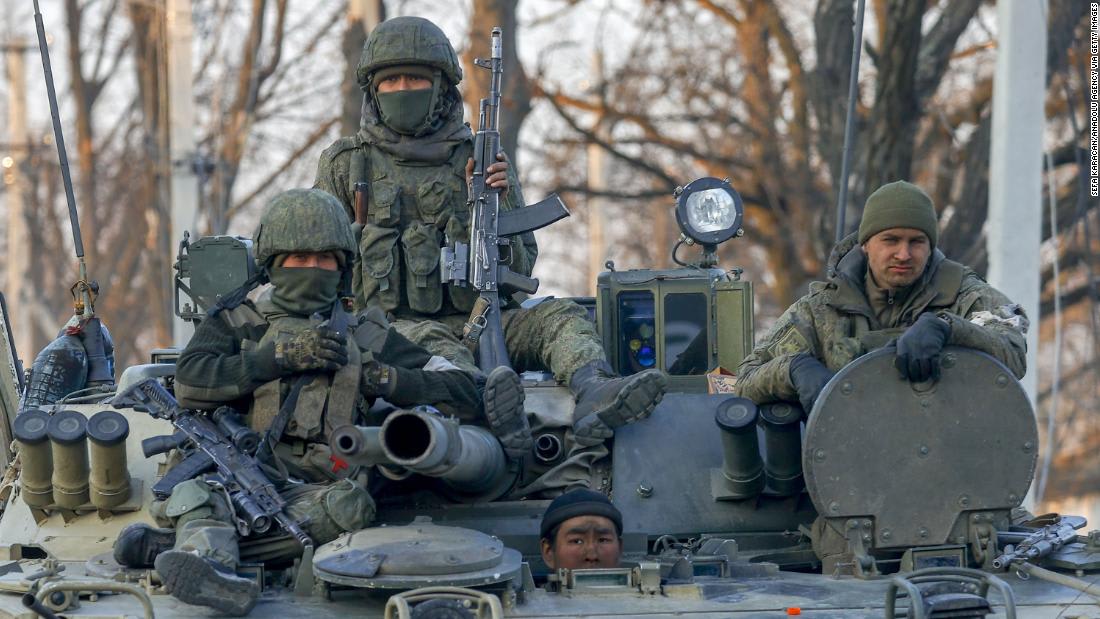 Russia says its military is regrouping. A ramped-up assault on eastern Ukraine could be next

Russian forces may be regrouping in Belarus, Ukrainian officials said. Heavy shelling has been reported in eastern Ukraine amid an apparent shift by Russia to redirect military efforts to the Donbas region.

Additionally, an intense bombardment of the Kharkiv region has prevented the opening of evacuation corridors there, according to its military governor.

If you're just reading in now, here are more of the latest headlines from the Russia-Ukraine conflict:

Linda Thomas-Greenfield, the US ambassador to the United Nations, plans to travel to Moldova and Romania in early April to focus on the efforts to assist Ukrainian refugees and humanitarian needs “created by the Russian Federation’s aggression and war,” according to a release from the US Mission.

While abroad from April 2-4, Thomas-Greenfield will meet with Ukrainian refugees and hear about their firsthand experiences fleeing war, according to the release.

She will also meet with nongovernmental organization partners and UN agencies working to aid the refugee population, as well government officials engaged in humanitarian response.

Russian President Vladimir Putin said Thursday that according to a newly signed decree regarding natural gas trading with “unfriendly countries,” companies will need to have accounts in Russian banks and pay for contracts in rubles.

“Today, I signed a decree which sets the rules for trading in Russian natural gas with the so-called unfriendly states. We suggest that counter-parties in these countries use a very simple and transparent scheme in order to buy Russian gas they need to open ruble accounts in Russian banks, and payments should come from these accounts,” Putin said on Thursday.

“If these payments are not made, we shall deem this as non-performance on the part of the buyers and that will lead to consequences. Nobody gives us anything for free and we’re not about to be charitable,” Putin said, adding that active contracts will be suspended.