Serhiy Haidai, head of the Luhansk regional military administration in eastern Ukraine, said Monday that the Russian military had been gathering a "significant accumulation of troops and military equipment" in the region, in apparent preparation for an offensive push.

"Yes, I can confirm, that there is a significant accumulation of troops and military equipment that is getting prepared for the major breakthrough [in Luhansk region]," he said, speaking on national television.
"There was an attempt of a breakthrough in Rubizhne this night, our defenders repelled an attack. We are holding out, but we do see there's a major accumulation of troops."

Leaders in the Russian-backed separatist Donetsk and Luhansk People's Republics previously announced a "full mobilization" in the territories under their control.

Haidai said the mobilization was underway, but added that the newly mobilized recruits were inexperienced and were "being used as cannon fodder."

The Russian military has said it is pulling back its forces from around Kyiv and the northern Ukrainian city of Chernihiv to concentrate efforts in the Donbas region of Ukraine's east.

A humanitarian corridor from the besieged southeastern Ukrainian city of Mariupol will be in operation on Monday, according to a senior Ukrainian official, despite delays and difficulties keeping the route open for evacuation.

On Sunday, seven buses accompanied by a delegation of the International Committee of the Red Cross reached Manhush, Vereshchuk said. The ICRC delegation is planning on continuing the movement from Manhush to Mariupol along with the buses, she said.

If the ICRC-accompanied convoy reaches Mariupol, it would be the first case of organized evacuation by buses from the bombarded city.

"We will also continue evacuating people from Severodonetsk, Popasna, Lysychansk, Rubizhne and Nyzhnie village of Luhansk region," Vereshchuk said, referring to communities in the east of Ukraine that have seen intense fighting and have come under heavy shelling.
"The occupiers constantly violate the ceasefire and fire upon the humanitarian convoys in Luhansk region. The courageous policemen, servicemen and drivers keep assisting the local residence to evacuate under the command of the Head of Luhansk regional administration regardless."

Some context: Mariupol has faced weeks of intense bombardment from Russian forces, and safely evacuating residents has proven exceedingly difficult. Ukrainian officials have described the situation there for the remaining residents as a major humanitarian emergency.

Japan’s Prime Minister Fumio Kishida denounced the killing of civilians in the Kyiv region in a statement on social media Monday.

“I am deeply shocked at the fact that on the outskirts of Kyiv terrible atrocities have been perpetrated against civilians,” Kishida said.
“The killing of innocent civilians violates international humanitarian law. It is absolutely intolerable and Japan condemns it in the strongest terms.”

The Japanese Prime Minister also called for action saying, “Russia must be held strictly accountable for those acts.”

French President Emmanuel Macron said it’s “his wish” to see a total block on Russian exports of coal and oil to the European Union “this week," following the discovery of what he described as “war crimes” in the Ukrainian town of Bucha.

Speaking Monday on French broadcaster France Inter, Macron said there are “very clear signs” war crimes have been committed in Bucha and, “it’s pretty established that it’s the Russian army” who are responsible for them.

“We can’t let it slide. We must have sanctions that dissuade with what’s happened there (in Bucha), what’s happening at Mariupol,” he said.

Macron said that he would have discussions with his European partners this week regarding further sanctions.

“Those who are behind these crimes must answer for them,” he said.
“We must send the signal very clear that it’s our collective dignity and it’s our values that we defend,” he added. “There’s no peace without justice."

France stands ready to assist Ukraine in its investigation of the events in Bucha, Macron said, yet he refused to state if Russian President Vladimir Putin should face trial over what happened there.

The southern port city of Odesa was hit by an airstrike overnight, a military administration official said Monday morning.

"Several missiles hit one of the districts in Odesa, one object was hit," said Serhii Bratchuk, spokesperson of the operational staff of the Odesa regional military administration.
"Further information is being clarified."

A fuel depot was hit in Odesa early Sunday by Russian forces. Bratchuk said there were no casualties in that incident.

Some context: Odesa has been a place of relative calm during the Russian invasion and a haven for displaced Ukrainians from areas that have seen the worst fighting. But Odesa has been bracing for a Russian attack for weeks, with its city center full of anti-tank barricades to fortify against an invasion.

The bodies of civilians in the Kyiv region continue to be discovered following the departure of Russian forces, with at least 400 found so far, Ukrainian officials said Monday citing preliminary information.

Efforts to find local residents who stayed behind under Russian occupation have been hampered by the presence of mines, Ukrainian Interior Minister Denys Monastyrskiy said in televised remarks.

"I’ve talked to rescuers. They’ve made paths to some houses," he said.
"In other towns (in Kyiv region), the paths are mined. Rescuers say they are moving step by step now, and do not name the number of civilians killed. This figure will obviously be counted in hundreds. Many locals are reported missing. It is being established who was abducted or tortured by the Russians, who disappeared and did not return."

Naming locations such as Bucha, Irpin and Hostomel, interior ministry adviser Vadym Denysenko said approximately 400 civilians have been found dead in the Kyiv region but stipulated those figures were preliminary and would be updated.

Ukrainian Foreign Minister Dmytro Kuleba has called on the International Criminal Court to investigate the apparent killing of civilians in Bucha, northwest of Kyiv.

Sharing an interview with the UK's Times Radio on social media, Kuleba said Sunday, "I take this opportunity to call on the International Criminal Court and international organizations to send their missions to Bucha and other liberated towns, in cooperation with Ukrainian law enforcement agencies, to collect all the evidence of these war crimes.”

Kuleba accused Russian troops of killing civilians “out of anger” while occupying and later withdrawing from Bucha.

Some context: Shocking images show at least 20 civilian men’s bodies strewn across the street in Bucha following the withdrawal of Russian forces from the area. A mass grave was also discovered in the town. A CNN team saw at least a dozen bodies in body bags piled inside the grave, with Bucha's mayor saying there could be up to 300 victims buried on site.

Leaders across the European Union and NATO were quick to denounce the civilian deaths, with some calling for accountability and investigations for war crimes. Russia has dismissed photos of the dead as fake. 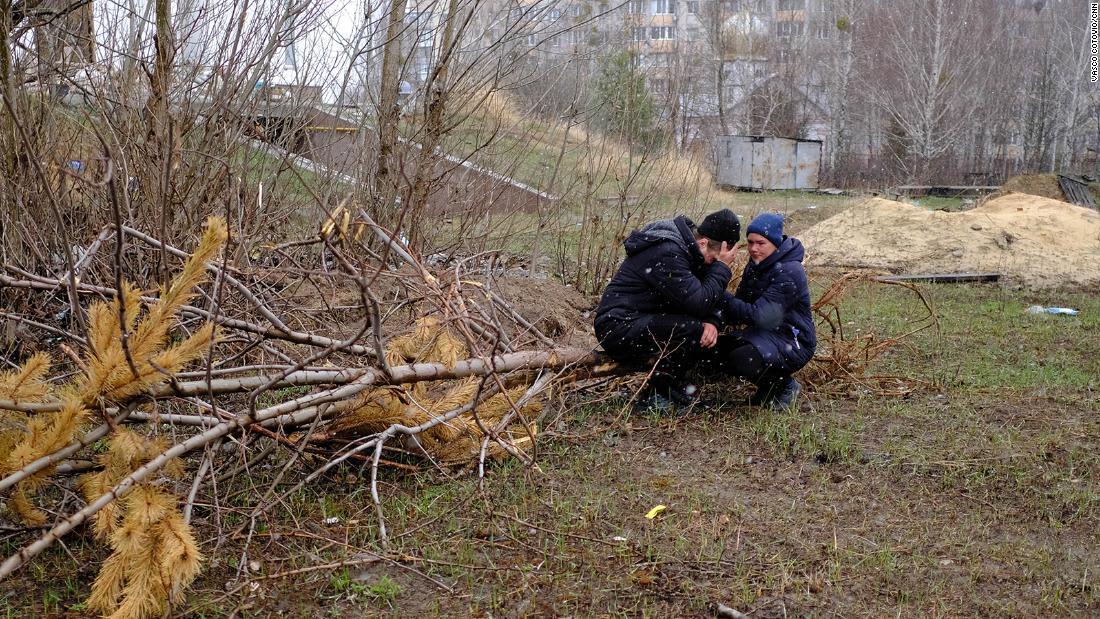 Russian military forces are "continuing to consolidate and reorganize as they refocus their offensive into the Donbas region in the east of Ukraine,” the UK Ministry of Defense said in an intelligence update Monday.

“Russian troops, including mercenaries from the Russian state-linked Wagner private military company, are being moved into the area,” the MoD added.

Some context: The update comes after US officials familiar with the latest US intelligence assessments said Russia has revised its Ukraine war strategy to focus on trying to take control of the Donbas and other eastern regions, with a target date of early May.

British officials have noted throughout the last week that fighters from the Wagner mercenary group would likely be used by Russia, in large part due to low morale among Russian forces and the stalled efforts of their invasion.

As of Sunday, at least 1,417 civilians have died in Ukraine since the Russian invasion began, the UN Human Rights office (OHCHR) said Monday.

Of those who died, at least 121 were children, according to OHCHR. At least 2,038 civilians have been injured.

"Most of the civilian casualties recorded were caused by the use of explosive weapons with a wide impact area, including shelling from heavy artillery and multi-launch rocket systems, and missile and air strikes," OHCHR said in the statement.

Many of the killings occurred in Ukrainian-controlled parts of the country, which have suffered heavy bombardment from Russian forces — including areas in western Ukraine far from the frontlines. At least 67 of the deaths occurred in the eastern Donetsk and Luhansk self-declared republics, according to the statement.

The UN OHCHR warned the civilian death toll is likely to be much higher.

"Especially in government-controlled territory and especially in recent days, as the receipt of information from some locations where intense hostilities have been going on has been delayed and many reports are still pending corroboration," the agency said.