On Wednesday, Vadym Denysenko, adviser to Ukraine's Ministry of Interior, said, "If we talk about the key directions where combat will be ongoing -- it's the Sloviansk [Donetsk region] and Barvinkove [Kharkiv region] directions, in the Luhansk region it's in the Popasna and Rubizhne areas and, of course, in Mariupol."

Some background: Southeastern Mariupol has been under heavy bombardment for many weeks, with Ukrainian officials calling the situation in the encircled city a humanitarian catastrophe. According to officials, around 100,000 civilians require evacuation from Mariupol.

Further north, Serhii Haidai, the military governor of the Luhansk region issued a statement Wednesday calling for the evacuation of several towns in the region.

I urge the evacuation of Severodonetsk, Lysychansk, Kreminna, Rubizhne, Popasna, Hirske," he said on Telegram. "The Russians are destroying the railway connections of Donetsk region."

Haidai said five evacuation corridors would be open Wednesday for getting civilians out of the region.

"We will take everyone out if the Russians allow us to get to the gathering places," he said. "As you can see, they do not always observe the 'ceasefire regime.'"

Haidai added: "I appeal to every resident of Luhansk region -- evacuate while it is safe. We cannot always get even to the southern part of Rubizhne."

He added in a separate statement that the town of Popasna was under shelling by Grad rockets.

"There is no 'ceasefire mode' in Popasna," he said. "The Russians are shelling with Grads, mortars, artillery. A significant number of private houses are on fire. Evacuation from Popasna is under threat today."

Elsewhere in eastern Ukraine, Pavlo Kyrylenko, head of the Donetsk regional military administration, said a humanitarian distribution point in the town of Vuhledar had been shelled by Russian rocket artillery, killing two and injuring five.

Pope Francis has condemned the killing of civilians in the Kyiv suburb of Bucha by the Russian military and renewed his call for an end to the war in Ukraine.

Speaking at his Wednesday general audience at the Vatican, the Pope appealed for an end to the “atrocities” seen in Bucha, where the bodies of civilians were found strewn across the streets.

“Even more horrendous cruelties are occurring, even against civilians, women and children. They are victims whose innocent blood cries out to heaven and implores,” he said.

Pontiff joined by group of Ukrainian children refugees: The Pope proceeded to unfurl a Ukrainian flag, which he said “came from the martyred city of Bucha,” and kiss it. The move was received with wide applause from the audience.

Francis then invited a group of about a dozen Ukrainian children, who are now refugees in Italy, to come up on the stage with him.

Francis also strongly criticized failures by international organizations to bring an end to the war in Ukraine.

“After World War II, the attempt was made to lay the foundations of a new era of peace. But, unfortunately, the old story of competition between the greater powers went on. And, in the current war in Ukraine, we are witnessing the impotence of the International Organizations."

Some background: While the Pope has not yet visited Ukraine amid Russia's invasion, he told journalists on April 2 that a trip "is on the table."

Francis' comments at his general audience on Wednesday echoed his previous shows of support for Ukrainian refugees and calls for an end to the war.

On March 19, Francis visited 19 Ukrainian refugee children at the Bambino Gesù Children's Hospital in Rome, Italy. They were receiving treatment for oncological and neurological diseases among others, as well as severe injuries from blasts, Vatican Press Director Matteo Bruni said at the time.

"Enough. Stop. Let the weapons fall silent. Negotiate seriously for peace," Francis said at the end of March, during his weekly Angelus address.

"War cannot be something that is inevitable. We cannot get used to war," he added.

Addressing the European Parliament in Brussels, von der Leyen said the European Union expects "the rest of the world to take a clear stance against Putin's war of choice."

She added that the bloc has sent a message to China calling for sanctions imposed on Russia by the EU to be respected, or at the least, not to be circumvented and undermined.

"As a permanent member of the UN Security Council, China has a special responsibility to uphold international peace and security," von der Leyen told EU lawmakers.

She warned that the "war that Russia has unleashed" is "not limited to Europe" and will define how violations of international law are treated in the future.

"China has to take a clear stance on that," she added.

Some context: Von der Leyen said Wednesday that the EU would be placing further sanctions on Russia, likely on gas and oil.

The announcement came a day after the EU revealed its plans to impose a fifth wave of sanctions on Russia, including an import ban on Russian coal.

Read more on the subject here: 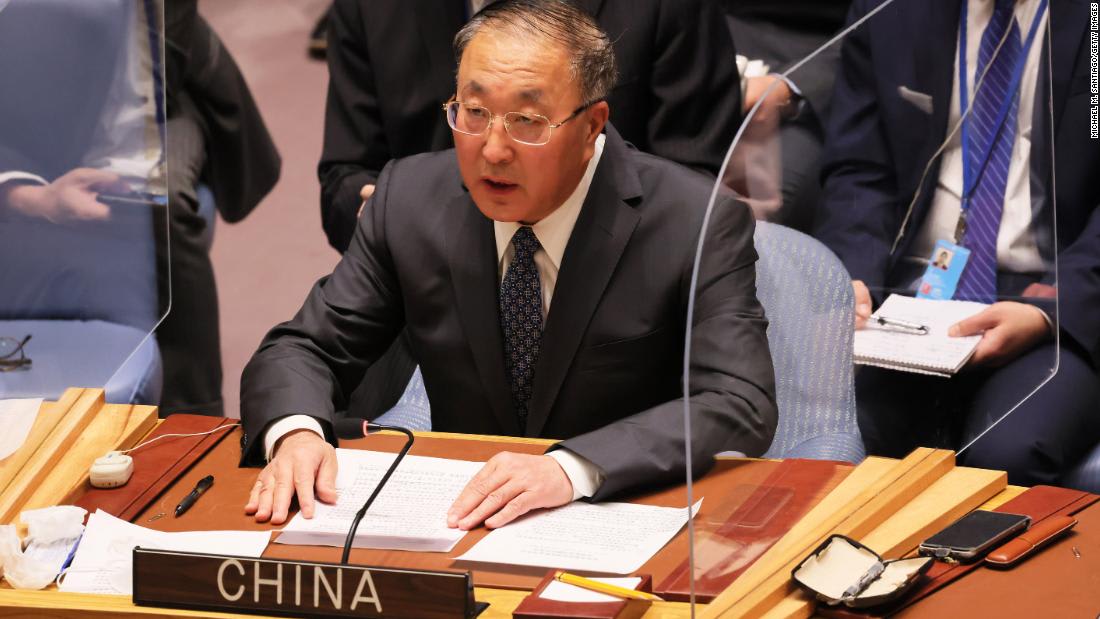 In the southeastern region of Ukraine, she said the corridors open would be: 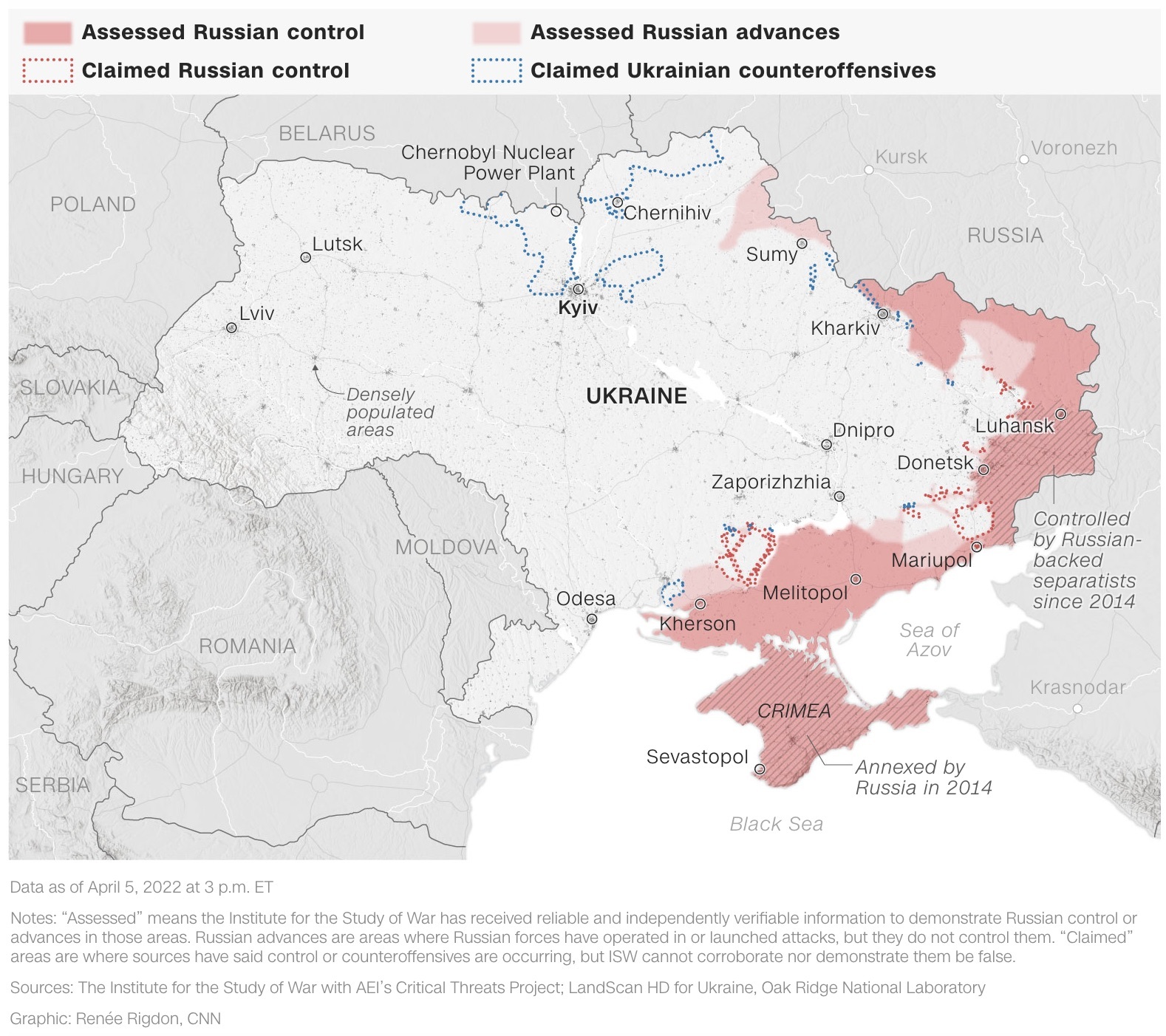 Evacuation attempts stalled: Mariupol Mayor Vadym Boichenko said Monday his city was "on the brink of a humanitarian catastrophe," with more than 100,000 people still requiring evacuation.

Bus convoys for evacuating civilians from the besieged port of Mariupol have not been able to reach the city, and aid workers from the International Committee of the Red Cross (ICRC) were detained in Russian-held territory while attempting to evacuate desperate residents of Mariupol, a spokesperson told CNN Tuesday.

Vereshchuk announced the ICRC team's release in a statement posted to Telegram earlier on Tuesday, remarking that "despite the promises of their leadership, the [Russian] occupying forces do not allow anyone to go to Mariupol."

They were later released after negotiations, Vereshchuk added.

Meanwhile, the eastern region of Luhansk has seen intense fighting, with settlements coming under heavy shelling. According to Vereshchuk, the corridors open Wednesday in the Luhansk region are:

Greece has announced it is removing 12 Russian diplomats.

"The Greek authorities have declared 12 members of the diplomatic and consular missions of the Russian Federation accredited in Greece as personae non gratae," the Greek Foreign Ministry said in a press release Wednesday.

The Russian Ambassador in Greece was informed earlier today about this decision, according to the Foreign Ministry.

Portugal, Italy, Sweden, Spain, Estonia, Denmark and Latvia all announced Tuesday that they would expel Russian diplomats and staff members from their respective territories.

The Russian military announced a series of strikes around Ukraine targeting what they described as fuel storage and supply bases around the country.

Konashenkov claimed those installations provided fuel to Ukrainian troops in the areas of Kharkiv and Mykolaiv and in the Donbas region of Ukraine's east.

Some context: Ukrainian officials earlier confirmed strikes and explosions overnight in several regions, including in the Lviv, Vinnytsia and Dnipropetrovsk regions.

A fuel depot in east-central Ukraine was destroyed in a Russian airstrike overnight, according to Valentyn Reznichenko, the head of the Dnipropetrovsk regional military administration.

Meanwhile, Russian strikes on Saturday interrupted rail service and sparked a fire in the Dnipropetrovsk region, and the office of Ukraine's Prosecutor General said a criminal investigation has been opened into the attack.

"The Armed Forces of the Russian Federation, ignoring the norms of international humanitarian law, carried out a rocket attack on a civilian transport railway hub and an open area of the city of Pavlohrad," according to a statement on Telegram from the office. "As a result of the airstrike of the Russian invaders, guided missiles damaged railway tracks and freight cars."

The Russian column of tanks and armored personnel carriers sped along a residential street in Bucha, a tree-lined suburb of the capital Kyiv. That was February 27th.

A short time later, that same line of vehicles lay in ruins, the wreckage smoldering, after being ambushed by Ukrainian forces.

There was no sign of the column's soldiers. In a video showing the destruction, a man could be heard muttering: "I wish you all to burn in hell."

But that Ukrainian victory was to be short-lived; a month-long occupation of Bucha by Russian forces followed.

Devastation mirrors incidents across the country: In recent days, Moscow has claimed -- without evidence -- that the atrocities in Bucha were staged -- calling it "fake," and part of a "planned media campaign."

But witnesses who spoke to CNN said the carnage in the town began weeks ago.

And the devastation there bears similarities to Russia's playbook in other towns and cities in Ukraine, where officials say civilian infrastructure has come under attack -- with power supplies knocked out, water cut off and communications towers damaged -- making it harder for local residents to hold out against Russian troops. But Ukraine has not surrendered.

There have also been reports of looting, disappearances, and evidence of the indiscriminate killings of civilians since the war began. 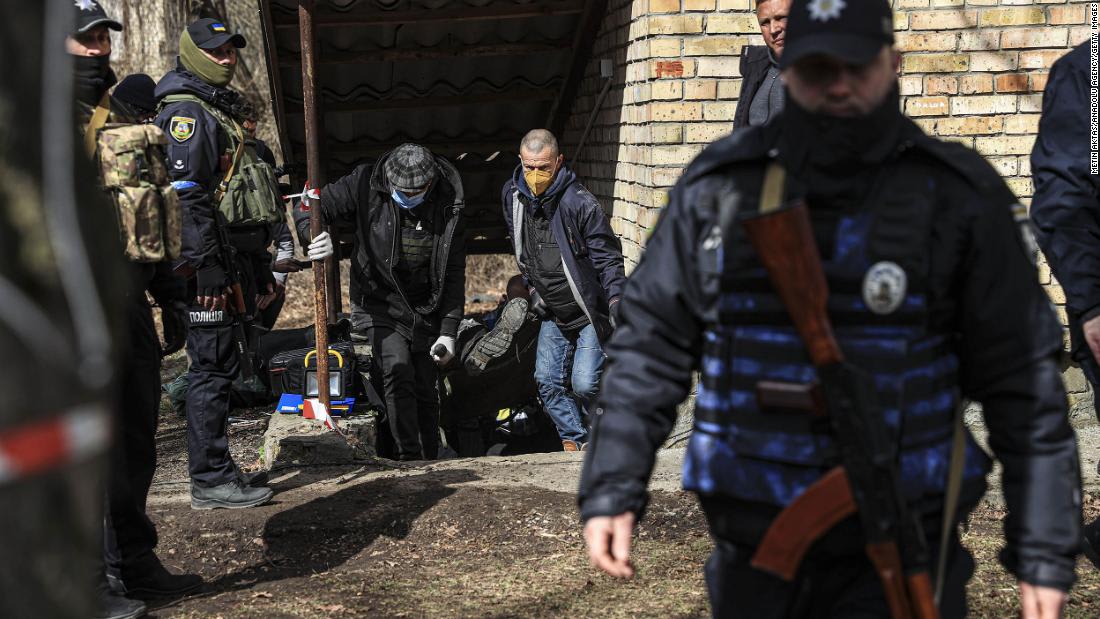 "At this critical point in the war we must increase the pressure on Putin again,” von der Leyen said in an address to the European Parliament in Brussels.

On Tuesday, the EU announced its plans to impose a fifth package of sanctions on Russia including an import ban on Russian coal.

These sanctions will not be our last sanctions. As I said already yesterday. Yes, we've now banned coal, but now we have to look into oil," she said.

The EU also needs to look at the "revenues that Russia gets from fossil fuels," she added.

Her remarks were echoed by European Council chief Charles Michel in a tweet Wednesday, saying that EU "measures on oil, and even gas will also be needed sooner or later."

Explosions were reported late Tuesday in the Radekhiv area of Lviv region in western Ukraine, according to Ukrainian officials.

"Our air defense forces shot down two enemy cruise missiles over Radekhiv," Maksym Kozytskyi, head of the regional military administration, said Wednesday on Telegram.
"The wreckage fell on the outskirts of the city, resulting in explosions at unused civilian infrastructure."

A fire followed the explosion and was immediately extinguished by the State Emergency Service of Ukraine, Kozytskyi said. No casualties were reported.

"Last night, the occupiers' fighter jets flying from Belarus hit the territory of Ukraine with cruise missiles," the statement read. "Ruscists [Russian fascists] were aiming for civil infrastructure objects of Lviv region. But due to the successful actions of the anti-aircraft missile forces of Air Command West, two cruise missiles were destroyed, making it impossible for the enemy missiles to hit the target."