Japan has requested that the International Criminal Court (ICC) investigate the killing of civilians in the Kyiv region by Russia as a possible war crime, the country's Prime Minister Fumio Kishida said on Tuesday.

"The killing of these innocent civilians is a war crime, and our country has requested the International Criminal Court investigate this. I believe that Russia must be held strictly accountable," Kishida told reporters.

On Monday, Kishida expressed shock and dismay in response to the "terrible atrocities" perpetrated against Ukrainian civilians in the town of Bucha on the outskirts of Kyiv.

Some background: Images of bodies strewn across the street in Bucha emerged over the weekend following the withdrawal of Russian forces from the area, prompting Ukrainian President Volodymyr Zelensky to call for an end to Russian "war crimes." On Wednesday, US President Joe Biden declared "major war crimes" were being discovered in Ukraine as Russian forces retreat from areas around Kyiv.

World leaders have continued to condemn the ongoing violence in Ukraine as Russian forces ramp up their attacks in the east of the country.

As a result of the fighting, 10 evacuation corridors have been agreed for Thursday as civilians try to flee the violence, Ukraine's Deputy Prime Minister Iryna Vereshchuk announced.

Here are the latest developments from the war in Ukraine:

Bucha curfew: Curfews have been announced in the vicinity of Bucha, northwest of Kyiv, due to looting, a senior Ukrainian official said Thursday, adding that the presence of mines and unexploded ordnance remained a problem in areas recently wrested from Russian control. Vadym Denysenko, adviser to Ukraine's Interior Minister, said more than 1,500 explosive devices were demined in the Kyiv region alone on Wednesday.

Missiles shot down near Zaporizhzhia: Ukraine says its anti-air defense shot down three cruise missiles near the southeastern city of Zaporizhzhia on Wednesday night as the Russian military shifts its focus to the east of the country. A CNN team in the city heard what sounded like an aircraft and one loud explosion around 11 p.m. local time. It comes as the civilian evacuation of Zaporizhzhia has been stepped up after Russian forces occupied a nearby nuclear power plant last week.

Refugees flee to Poland: More than 2.5 million refugees have crossed the border into Poland, the Polish Border Guard said Thursday. While it is unclear how many remain in the country, an interior ministry spokesperson told CNN that 700,000 Ukrainians had registered in a Polish database allowing refugees to take up employment or continue their education. More than 4.3 million people have now fled Ukraine since the Russian invasion started on February 24, according to the United Nations High Commissioner for Refugees.

EU sanctions: The European Union’s top diplomat Josep Borrell has expressed his hope that the bloc’s fifth round of sanctions against Russia will be agreed by either Thursday or Friday. It comes after the EU announced proposed plans for a five-pillar package of sanctions, including a ban on Russian coal imports and a full transaction ban on four key Russian banks.

Global condemnation: Australia unveiled new sanctions on 67 Russian officials on Thursday as world leaders continue to condemn the violence in Ukraine. On Wednesday, US President Joe Biden declared "major war crimes" were being discovered as the White House announced new sanctions on Russia's largest financial institutions and a number of individuals tied to the Kremlin. It comes as the UK’s top diplomat told NATO foreign ministers that the "age of engagement with Russia is over."

NATO warning: Despite Russia focusing its attentions to the east, NATO's chief warned the war could stretch on for years, as Russian President Vladimir Putin wants "to control the whole of Ukraine." Secretary General Jens Stoltenberg also said NATO will "address the need for more air defense systems, anti-tank weapons, lighter but also heavier weapons, and many different types of support to Ukraine."

"I cannot tell you the exact time due to security reasons. But sometime during the day, the President of Ukraine will meet with Ursula von der Leyen," Nikiforov told Ukrainian TV program "UAtogether" on Thursday.

He did not specify which day the meeting would take place.

Some background: Zelensky has been making the rounds with global leaders in recent weeks, pushing for harsher sanctions and war crimes investigations on Russia amid its invasion of Ukraine.

He made an emotionally charged address to the United Nations Security Council on Tuesday, in which he accused Russian troops of indiscriminately killing civilians "just for their pleasure," and questioned the very mandate of the Security Council itself.

Iryna Filkina had big plans for the year. She was turning 53 in April and planned to start focusing on herself after spending the past three decades working tirelessly and raising her two daughters between the towns of Bucha and Irpin, in the suburbs of Ukraine's capital Kyiv.

But her plans stalled at the end of February when Russia invaded Ukraine. Her daughters decided to cross the border into Poland, but Filkina stayed back to help people.

On March 5, Filkina tried to get a seat in one of the cars that was evacuating people from the shopping center out of the town. But when there was no room, she decided to cycle home.

One of Filkina's daughters, 26-year-old Olga Shchyruk, said she begged her mother not to ride her black bike home that day. She asked her to take the train out of the city instead.

I told her that it was unsafe there. Russia occupied the whole village -- they killed people," Shchyruk told CNN.

"Olga, don't you know your mom? I can move mountains!" Filkina replied, according to Shchyruk, a child psychologist who was in Poland at the time helping other Ukrainian refugees.

It was the last conversation they had. Filkina never made it home that day. 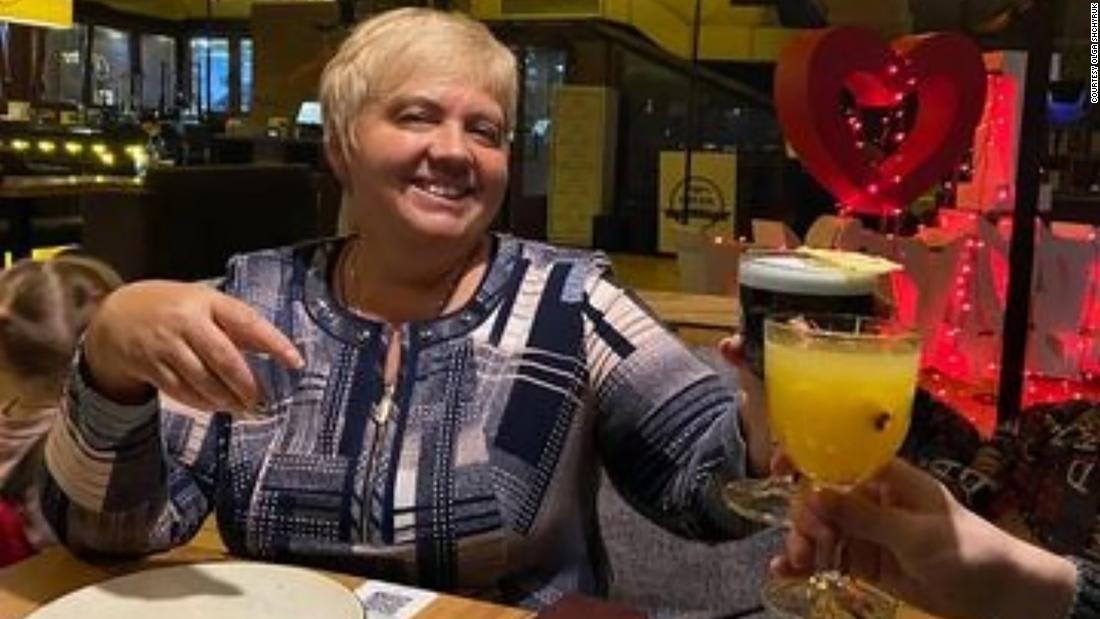 A Ukrainian mother had plans to change her life this year. Russian forces shot her as she cycled home.

More than 300,000 refugees have arrived in Germany from Ukraine since the beginning of the Russian invasion six weeks ago, according to Germany's Interior Ministry.

As of Thursday, the ministry said it had registered 316,453 refugees from Ukraine in the country.

The actual number of incoming refugees could be significantly higher due to the absence of border checks between Poland and Germany, a spokesperson for the Interior Ministry told CNN.

The majority of refugees arriving in Germany are women, children and elderly people, the spokesperson added.

In the Donetsk region, she said there would be one corridor from Mariupol to Zaporizhzhia for private vehicles.

In the Zaporizhzhia region, Vereshchuk said four corridors would open:

In the Luhansk region, five corridors were listed by Vereshchuk:

This comes after Vereshchuk said that 4,892 people were evacuated through evacuation corridors on Wednesday.

The International Committee of the Red Cross (ICRC) told CNN on Wednesday that a Red Cross convoy of buses and private cars carrying more than 500 civilians fleeing Mariupol had arrived in the southeastern city of Zaporizhzhia.

Some background: While some evacuation attempts across Ukraine have been successful, others have been disrupted. Earlier this week, the ICRC said its aid workers were detained in Russian-held territory while attempting to evacuate desperate residents of Mariupol. They were later released.

US Secretary of State Antony Blinken will meet with Ukrainian Foreign Minister Dmytro Kuleba in Brussels, Belgium, on Thursday, according to the State Department public schedule.

The two most recently met in person along with their defense department colleagues in Warsaw, Poland.

"I came here today to discuss three most important things: Weapons, weapons, and weapons. Ukraine’s urgent needs, the sustainability of supplies, and long-term solutions which will help Ukraine to prevail," Kuleba tweeted following that meeting.

The meeting with Blinken is scheduled to take place at 10 a.m. ET.

More than 2.5 million refugees fleeing the war in Ukraine have crossed the border into Poland, the Polish Border Guard said on Thursday.

While it is unclear how many of the 2.5 million refugees are still in Poland, an interior ministry spokesperson told CNN on Thursday that 700,000 Ukrainians had registered in a Polish database allowing refugees to take up employment or continue their education.

Those registering for the database "are mainly people who wish to stay in Poland," the spokesperson added.

More than 4.3 million people have fled Ukraine since the Russian invasion started on February 24, according to the United Nations High Commissioner for Refugees.

In addition, more than 7.1 million people are internally displaced in Ukraine having been forced to flee their homes, according to the latest International Organization for Migration report.

A CNN team in Zaporizhzhia heard what sounded like an aircraft and one loud explosion around 11 p.m. local time Wednesday.

Some context: The pace of civilian evacuations from the southeastern city of Zaporizhzhia has escalated in the past week, after the nearby nuclear power station in Enerhodar was captured by Russian soldiers.