The armored vehicles are stemming from the Cold War era East German army and had been sold to Sweden, then resold to the Czech Republic who will deliver them to Ukraine, according to the ministry.

According to the German war weapons control act, the Federal Security Council must approve of the export of weapons that originated from Germany at any time.

Correction: A previous version of this post incorrectly described the type of vehicle that Germany has approved the delivery of to Ukraine. Germany plans to send infantry fighting vehicles.

Nearly 300,000 refugees fleeing the war in Ukraine have arrived in Germany, according to the German Ministry of the Interior.

As of Friday, 294,508 refugees had been registered by German police.

The actual number of incoming refugees could be significantly higher due to the absence of border checks between Poland and Germany, an interior ministry spokesperson told CNN. The majority of refugees arriving in Germany are women, children and elderly people, the spokesperson said.

“I will head an IAEA assistance and support mission to the Chernobyl nuclear power as soon as possible. It will be the first in a series of such nuclear safety and security missions to Ukraine,” Grossi said on Twitter.

What we know: Grossi said the IAEA has an agreed framework with Ukraine and Russia to assist in the safety and security of the nuclear plants in Ukraine.

Grossi told reporters in Vienna Friday that the IAEA has delivered some equipment to Ukraine and has discussed sending staff to assist Ukrainian authorities.

“We agreed to have a rapid assistance mechanism” in case a situation takes place, Grossi said. “We are setting up a mechanism whereby we could be sending a team to assess and to assist almost immediately.”

Estonia has proposed that part of energy payments to Russia be put aside to pay for the costs of Ukraine’s recovery, the Estonian Minister of Foreign Affairs Eva-Maria Liimets told journalists on Friday.

“Russia must be held accountable for the devastating destruction they have caused and the war crimes they have committed in Ukraine,” she said, speaking alongside her French, Lithuanian and Latvian counterparts in Tallinn, Estonia.

Liimets added that assets frozen as part of sanctions against Russia could also be used “as a source of recovery funds for Ukrainian cities and infrastructure.”

“The NATO-Russia founding act is obsolete,” she added, calling for a “long-term containment policy,” regarding Russia and a continued policy of non-recognition of Russian-occupied areas of Ukraine.

French Foreign Minister Jean-Yves Le Drian said the details of new European Union sanctions against Russia would be decided “in the coming days,” with the aim to "force Putin to put an end to this crazy aggression.”

Latvian Foreign Minister Edgars Rinkēvičs added that “a permanent (NATO) forward defense needs to be considered and agreed” upon at the next NATO summit in June 2022. He said the EU should consider “other commodities” beyond the energy sector that the bloc should explore for sanctions against Russia.

Some background: Europe — which gets about 40% of its natural gas from Russia — has recently been making efforts to reduce its reliance on Russian oil and gas.

US President Joe Biden announced a joint task force alongside European Commission President Ursula von der Leyen on March 25, which would include the United States supplying Europe with at least 15 billion cubic meters of liquefied natural gas in 2022, in partnership with other nations, the White House said.

Meanwhile, Russian President Vladimir Putin issued an ultimatum to "unfriendly" nations to pay for their energy in rubles starting April 1 or risk being cut off from vital supplies.

While the Kremlin today said that Russia will not immediately cut off gas supplies under the new decree, his high-stakes threat still sent shockwaves through Europe, which would struggle to keep its economy running for long without Russian energy.

Around 2,000 civilians are now on buses heading from the coastal city of Berdyansk to the Ukrainian government-held city of Zaporizhzhia, carrying civilians evacuating from the besieged port of Mariupol.

CNN is at the hub in Zaporizhzhia where the evacuees will arrive and then be processed.

"The evacuation convoy left Berdyansk for Zaporizhzhia," Mariupol city council said in a statement on Telegram. "Many private vehicles have joined the 42 buses escorted by Red Cross and SES (State Emergency Service) vehicles. Today we expect the arrival of a record number of Mariupol residents."

More than 100,000 residents remain trapped in the southern port city, according to officials.

The Czech Republic has seen more than a quarter of a million Ukrainian refugees apply for special long-term visas since the start of the Russian invasion, according to the Czech Ministry of the Interior.

A total of 251,713 Ukrainians have applied to stay in the country since late February, according to the latest ministry figures released Thursday.

On Thursday, 2,909 refugees registered with Czech authorities. That number dropped below the seven-day average of 3,554 arrivals per day.

As Ukrainians do not require visas for entry to the Czech Republic, the number of refugees in the country is likely to be considerably higher, a Czech Ministry of Interior press officer told CNN.

A column of buses evacuating civilians from the Russian-held city of Melitopol to Zaporizhzhia had departed Friday, said Kyrylo Tymoshenko, deputy head of the Office of the President of Ukraine.

"About 500 people are on buses departing from Melitopol to Zaporizhzhia," Tymoshenko said on Telegram. "About 300 private cars joined the evacuation column."

In a post on Facebook, Melitopol Mayor Ivan Fedorov said "Melitopol residents, who sincerely love their native land, were looking forward to the opportunity to leave it. It’s because the Russian occupiers turned the lives of peaceful people into hell. For several days, the Russian military defiantly blocked the 'green' [humanitarian] corridor and did not allow buses to enter Melitopol."

Fedorov said more than 1,000 people had assembled near an exit point to wait for the evacuation.

"I assure those thousands of Melitopol residents who wanted to, but for various reasons could not evacuate today, our team will not stop!" he said. "We are already forming another humanitarian convoy, which will soon deliver the necessary aid to Melitopol and pick up people from the city on the way back."

The conflict following Russia's invasion of Ukraine has now entered its sixth week. Here are the latest developments:

Blaze at a fuel depot: A huge fire has broken out at a fuel depot in Belgorod, a Russian city near the Ukrainian border, and Russia says an air strike from Ukrainian helicopters is to blame. CNN is so far unable to verify this claim and the Ukrainian defense ministry told CNN it has no information about the incident. Kremlin spokesperson Dmitry Peskov said Friday that the purported strike could have a potential negative impact on negotiations between Kyiv and Moscow. Talks between the two nations are due to resume Friday. 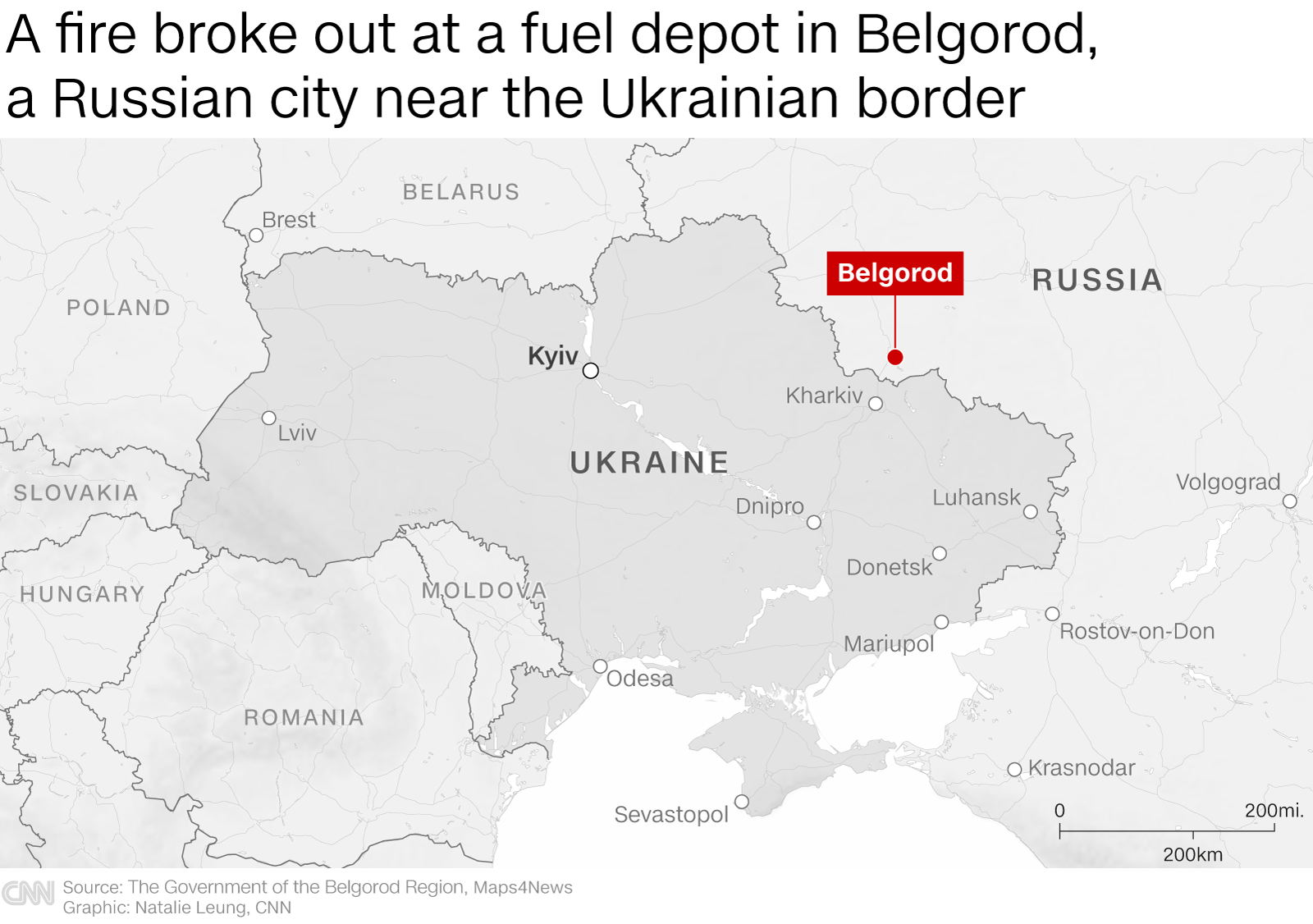 Mariupol evacuations: Around 2,000 civilians are on buses heading from the coastal city of Berdyansk to the Ukrainian government-held city of Zaporizhzhia, carrying civilians evacuated from the besieged city of Mariupol. CNN is at the hub in Zaporizhzhia where the people will be processed. More than 100,000 civilians remain trapped in Mariupol, according to Ukrainian authorities.

Death toll: At least 153 children have been killed since the Russian invasion began five week ago and 245 children have been injured, Ukrainian officials said Friday. Bombing and shelling have also damaged 859 educational institutions, including 83 that have been destroyed, they said.

EU-China Summit: Chinese leader Xi Jinping and Premier Li Keqiang will meet with European Union leaders in an online summit on Friday, and the war in Ukraine will be a "main focus" of the summit, the European Council said. China continues to face pressure to condemn the Russian invasion.

Heavy shelling continues: Ukrainian officials have continued to report heavy shelling in eastern Ukraine on Friday, particularly in the Luhansk region of the Donbas amid an apparent shift by Russia to redirect military efforts to the region. NATO's chief has warned Russian forces are repositioning rather than withdrawing, while Ukrainian and US officials say say Russians may be regrouping in Belarus. 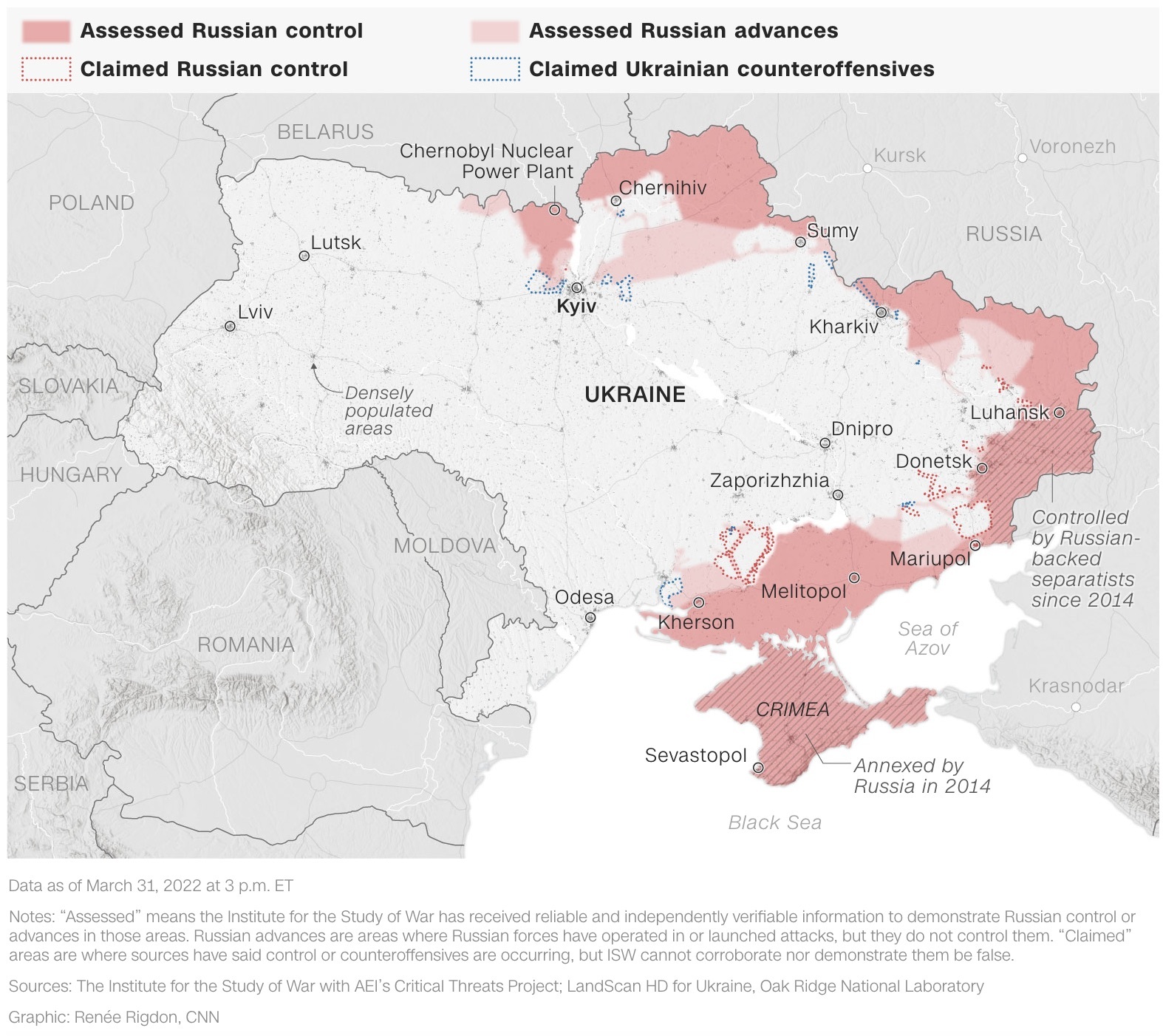 Russia says it won’t start cutting gas supply to “unfriendly countries” immediately under a new decree requiring payment to be made in rubles from April 1.

“Yesterday, I received many questions about whether this means that if there is no confirmation in rubles, would it mean that gas supplies will be cut off from April 1? No, it doesn't, and it doesn't follow the decree,” Kremlin spokesperson Dmitry Peskov said Friday.

Peskov said that payments for deliveries made today are not due until the end of April or beginning of May.

“But once again, I repeat that for the nuances, it is better to contact Gazprom,” Peskov said.

According to the new decree published yesterday, Gazprombank would open accounts in the name of Western gas buyers, convert their euros or dollars and then deposit the rubles into another account which would then be used to pay Gazprom.

German Chancellor Olaf Scholz insisted Thursday that Berlin will make payments for Russian gas only in euros. “We have looked at the contracts on gas delivery and other deliveries. [The contracts state] that payments are to be made in euros, sometimes in US dollars, but mostly in euros. And I made clear in my conversation with the Russian President that this will remain as it is,” Scholz said in Berlin during a joint news conference with his Austrian counterpart Karl Nehammer.

The EU’s Economics Commissioner, Paolo Gentiloni, told CNN’s Richard Quest on Thursday that this “is an attempt to circumvent European sanctions and to blackmail the European Union.”

Responding to a question, Peskov told reporters Friday that the decision to sell gas for rubles could be reversed in the future but for now the ruble is Russia’s preferred option.

“Absolutely. If other conditions come up. In this case, there is nothing concrete reinforced, but in the current conditions, the ruble is a more preferable and reliable option for us,” he said.