German Foreign Minister Annalena Baerbock told CNN that the responsibility for ending the war in Ukraine lays firmly at the feet of Russian President Vladimir Putin.

“It’s in Putin’s hands. He’s the one who started the war without any reason. It is now his responsibility to end the war,” Baerbock told CNN’s Chief International Anchor Christiane Amanpour in an exclusive interview.

Germany has approved the delivery of 56 type Pbv 501 combat tanks to Ukraine, according to a German defense ministry spokesperson Friday. Germany’s increased defense spending has marked a historic shift in the country’s foreign policy.

Baerbock said that Germany is offering increased military assistance to the Ukrainian government as “we are in situation where NATO is standing there in solidarity with Ukraine and on the other hand, there is Russia which has made clear that there is no red lines for themselves.”

“We are supporting from Germany with weapons we haven’t done in the past because the reality has changed so brutally,” she said.

“We had to change our course in Germany by 180 degrees because Ukraine needed our military support; we tried everything to avoid this war, but it was Putin’s decision to do the opposite and that’s why now we are also delivering weapons to Ukraine,” she said.

The foreign minister said that sanctions have been effective in leaving Putin “totally isolated,” but said that there are still strong energy links between Russia and Europe that needed severing. “The question we are raising about fossil fuels, oil, and energy, Europe is connected with Russia. Therefore we are working every day to phase out our fossil fuel dependency on Russia,” she told CNN.

When asked by Amanpour as to what Putin is saying in diplomatic talks, Baerbock stated that the Russian president had “entered into this war with a false narrative, with lies. … This wrong narrative he has been telling to the world is obviously also something he believes himself.”

“The few people that are left behind him or around him who can actually speak to him do not dare to tell him the truth about the reality in Ukraine, that his troops are not being as successful as they obviously thought in the past,” she added.

The International Energy Agency (IEA) announced Friday following an emergency meeting that its member countries will release additional oil from emergency reserves to cushion the blow caused by Russia’s invasion of Ukraine.

However, the IEA did not disclose key details on the size and timing of this additional emergency action, which would be in addition to the historic released announced by the White House on Thursday.

The IEA said details will be made public early next week. The latest steps from the IEA mark just the fifth time in the agency’s history that it has coordinated a release of emergency stockpiles.

In a statement, the IEA said energy ministers from its 31 member countries “reiterate their concerns about the energy security impacts of the egregious actions by Russia and voiced support for sanctions imposed by the international community in response.”

IEA members include the United States, the United Kingdom, Japan and Australia.

“The prospect of large-scale disruptions to Russian oil production is threatening to create a global oil supply shock,” the IEA said in the statement, noting that Russia is currently the world’s third-largest oil producer and the largest exporter.

“The higher the number, the more likely the prices come down,” Biden told reporters.

In early March, the IEA announced the coordinated release of 60 million barrels from emergency reserves of member nations, including 30 million from the US Strategic Petroleum Reserve.

In addition to the reserve releases, the IEA said its governing board recommends governments and consumers “maintain and intensify conservation efforts and energy savings.”

Russia exports about 5 million barrels a day of crude oil, representing roughly 12% of global trade, according to the IEA.

Erdoğan underlined the importance of “acting with common sense and maintaining dialogue,” according to a statement.

“Turkish President Erdoğan stated that hopes for peace had been revived since the meeting between the Russian and Ukrainian delegations in Istanbul had been positive and constructive,” the statement said.

“President Erdoğan expressed Turkey’s desire to crown the peace efforts by bringing together President Putin of Russia and President Volodymyr Zelensky of Ukraine,” it continued.

“President Putin of Russia for his part thanked President Erdoğan for having hosted the meeting between the Russian and Ukrainian negotiation delegations in Istanbul,” the statement added.

The Russian assault on the Ukrainian capital, Kyiv, may have abated for now, but fighting still rages in eastern Ukraine's Donbas region, amid signs that it will become the focus of the war in coming weeks.

On Thursday, US President Joe Biden said of Russian leader Vladimir Putin that "thus far there is no clear evidence that he's pulling all of his forces out of Kyiv. There's also evidence that he is beefing up his troops down in the Donbas area."

And later that same day, Ukrainian President Volodymyr Zelensky warned citizens of tough times ahead in the east, saying that in "Donbas, Mariupol, in the Kharkiv direction, Russian troops are accumulating the potential for strikes. Powerful blows. We will defend ourselves."

"The situation in the southern direction and in the Donbas remains extremely difficult," Zelensky added. It was the second time in 24 hours he had warned of an expanding Russian offensive in Donbas.

An analysis of what's happening on the ground in eastern Ukraine supports this view, with Russian armor and artillery intensifying their attacks, and yet more Ukrainian civilians fleeing westwards. The Russian offensive is being conducted in several directions simultaneously.

When Putin announced the invasion on Feb. 24, he claimed the goal of Russia's so-called "special military operation" was the liberation of Donbas from neo-Nazis and the protection of its people from alleged "genocide" by the Ukrainian authorities.

The Russian campaign since has been a smorgasbord of operations that have included a stuttering ground offensive and hugely destructive missile and artillery fire, and its ultimate goals are still difficult to divine. But the focus of Russia's military effort — and rhetoric — has recently shifted to the south and east of Ukraine. 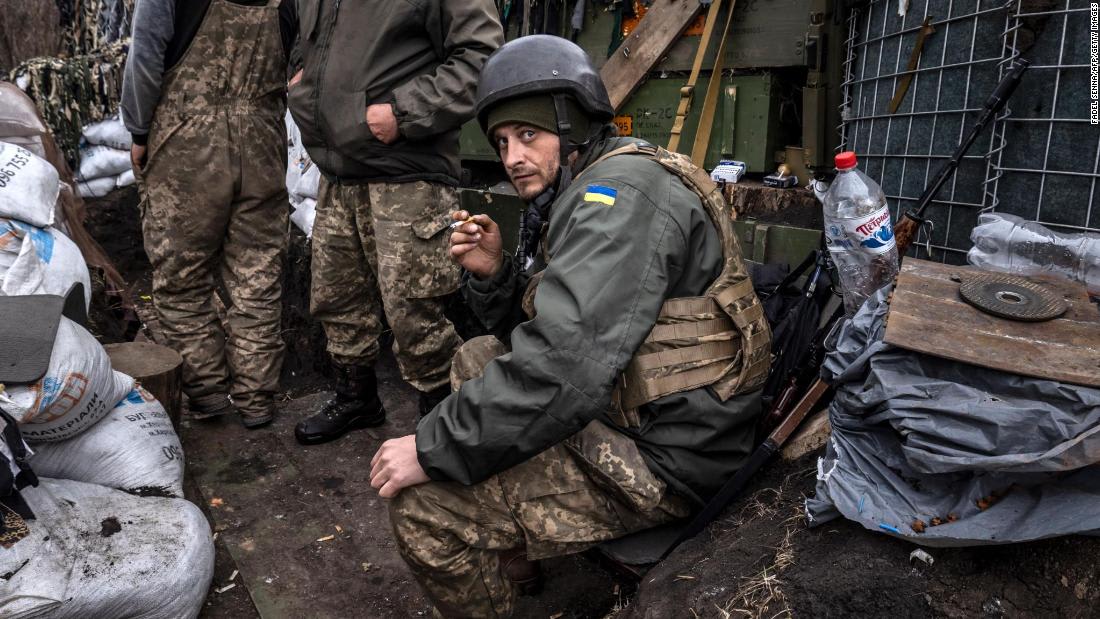 Russia may be intensifying its assault in eastern Ukraine. Here's what that means

As Ukrainian refugees continue to cross into neighboring European countries, the need for food only mounts.

DC-based chef David Guas is volunteering with World Central Kitchen in Poland, where a massive operation is helping to fill plates and stomachs.

“It’s a team effort … this is not a one-man show or a one-woman show by any means. When I got here, things were starting to be organized in the kitchen. They built this kitchen from the ground up. There was nothing here,” Guas said during a CNN interview. “Now there’s walk-in coolers, refrigeration, booster heaters are actually going up as we speak … every day comes like an upgrade.”

Guas and those alongside him are working 12-hour days, constantly focusing on feeding incoming refugees.

“We’re doing volume like I've never seen before. Our day starts between 7 and 7:30 … usually we’re leaving around 8 p.m., or 8:30. And we've done that every day since I've been in town," he said. "So it's not really any end in sight because like, you know, everybody keeps coming over and we want to make sure they have a hot meal.”

Part of the focus of the World Central Kitchen is to not only feed displaced Ukrainians, but to make certain the meals make sense, and offer a taste of home.

The EU and China agreed that “this war is threatening global security and the world economy,” Michel said.

The European Union would welcome positive steps by China to help end the war between Russia and Ukraine, European Council President Charles Michel also told reporters in Brussels on Friday.

“We will remain vigilant to any attempt to help Russia financially or militarily" and circumvent the sanctions imposed on Russia for its invasion of Ukraine, Michel said, "but any move on China to help end the war will be welcomed."

“We had the chance to explain the EU’s position, to call on China to act, to commit to participating actively in all efforts which are being made to restore peace and stability,” he added.

Von der Leyen said that a “very open and frank exchange” was had with Xi.

“China as a permanent member of the UN Security Council has a very special responsibility,” she said. “This is what we discussed in a very frank and open manner. We the EU are determined to support the multilateral order.”

"The fact that no European citizen would understand any support to Russia’s ability to wage war" was also discussed, per von der Leyen. "Moreover, it would lead to a major reputational damage for China here in Europe.”

The director of the Chernobyl nuclear power plant said it was impossible to determine the degree of radiation Russian troops were exposed to while occupying the territory.

In a statement on the Telegram channel of Energoatom, the state-owned operator of Ukraine's nuclear power plants, Chernobyl director Valery Seida said, "On the territory of the station itself, the occupiers did not dig anything, but the thick dust raised by passing vehicles and the radiation particles in it may have entered the body of rashists [racist-fascists, a Ukrainian slur for Russian troops] through the lungs."

It was unclear what Russian troops were doing in the so-called "Red Forest," a contaminated area, and it is possible they could have received significant radiation exposure when digging or entrenching there, according to the statement.

"At the same time, all the staff who were at the station during this period did not receive radiation, because people worked, albeit under great pressure, on a regular basis," Seida said.

Chernobyl, the site of the world's worst nuclear disaster, fell into the hands of Russian troops in the first week of the war in Ukraine. Energoatom said Thursday that Russian forces had withdrawn from the plant and its territory.

The armored vehicles are stemming from the Cold War era East German army and had been sold to Sweden, then resold to the Czech Republic who will deliver them to Ukraine, according to the ministry.

According to the German war weapons control act, the Federal Security Council must approve of the export of weapons that originated from Germany at any time.

Correction: A previous version of this post incorrectly described the type of vehicle that Germany has approved the delivery of to Ukraine. Germany plans to send infantry fighting vehicles.

Nearly 300,000 refugees fleeing the war in Ukraine have arrived in Germany, according to the German Ministry of the Interior.

As of Friday, 294,508 refugees had been registered by German police.

The actual number of incoming refugees could be significantly higher due to the absence of border checks between Poland and Germany, an interior ministry spokesperson told CNN. The majority of refugees arriving in Germany are women, children and elderly people, the spokesperson said.