US national security adviser Jake Sullivan warned that the US expects Russia’s new top general directing its war in Ukraine to carry out further brutal attacks on civilians.

“This particular general has a resume that includes brutality against civilians in other theaters, in Syria, and we can expect more of the same in this theater,” Sullivan told CNN’s Jake Tapper on "State of the Union." “This general will just be another author of crimes and brutality against Ukrainian civilians.”

CNN reported Sunday that Russian President Vladimir Putin has named Army Gen. Alexander Dvornikov, the commander of Russia’s Southern Military District, as its theater commander of its war in Ukraine following a series of battlefield setbacks and an apparent lack of coordination among groups of Russian forces operating in Ukraine.

Dvornikov, 60, was the first commander of Russia’s military operations in Syria, after Putin sent troops there in September 2015 to back the government of Syrian President Bashar al-Assad. Russia provided airpower to support Assad’s ground forces and helped reverse the tide of the Syrian civil war at a terrible cost.

Still, Sullivan downplayed the importance of the appointment to Russia’s overall chances of success, saying that Russia had already suffered “a strategic failure.”

“No appointment of any general can erase the fact that Russia has already faced a strategic failure in Ukraine,” Sullivan said. “They thought that they were going to be able to conquer the capital city and take other major cities with little resistance — that they’d in fact be welcomed with open arms. ... “And what we have learned in the first several weeks of this war is that Ukraine will never be subjugated to Russia. It doesn't matter which general President Putin tries to appoint." 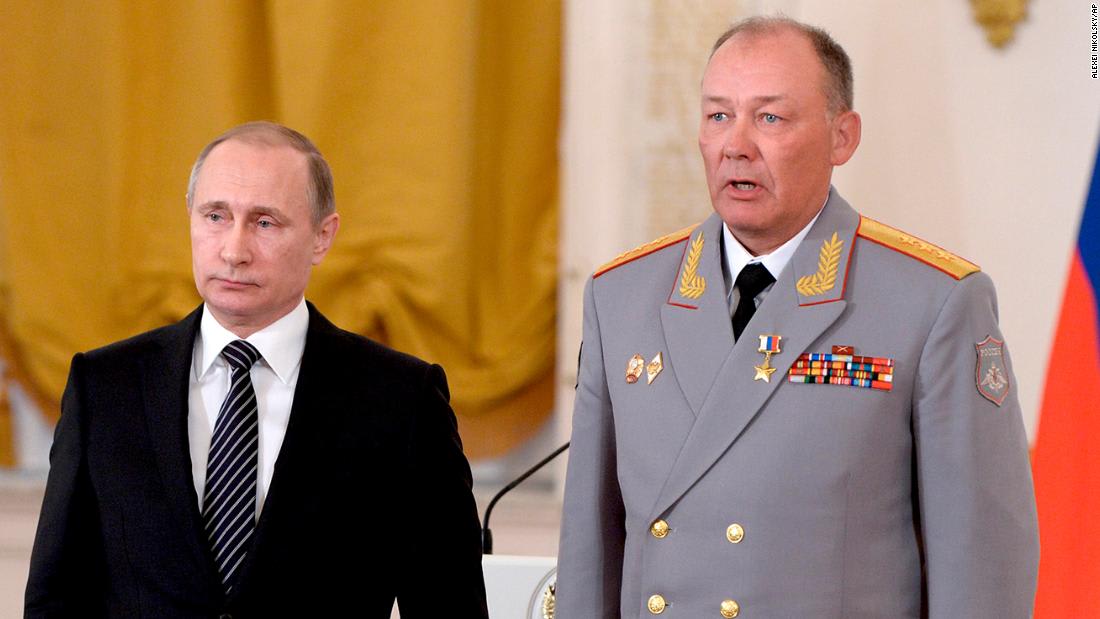 Aleksandr Dvornikov: What Putin's new commander tells us about his strategy - CNN Video

Cleaning crews have arrived at the railway station in Kramatorsk, eastern Ukraine, where dozens of Ukrainians were killed by a Russian missile strike on Friday while waiting to flee fighting.

CNN saw workers wearing plastic gloves gather scattered human remains. Others looked through papers and documents that were strewn across the station. Plastic bags filled with food lay on the ground, alongside shredded hats, gloves and shoes.

Several points of impact from the strike were visible, including what appeared to have been a direct hit on a car. Pools of blood and a deceased dog, partially covered by white sheeting, lay by the tracks.

At least 50 people, including five children, were killed in the attack, Ukrainian officials said Friday, with dozens more taken to local hospitals.

Here are more of the latest headlines from the Russia-Ukraine conflict:

US House Minority Leader Kevin McCarthy is leading a bipartisan delegation of lawmakers to Poland this weekend to meet with US armed forces and other groups amid the Russian invasion of Ukraine, according to a statement from his office.

"Poland has been an indispensable strategic partner by accepting millions of refugees, working closely with our military forces, and contributing fully to NATO as we all aim to restore peace and prosperity to the region," McCarthy said in a statement. "Our visit today should serve as a powerful message to Putin that we condemn his unprovoked attacks. Evil cannot win."

Valentyn Reznichenko, the head of the Dnipropetrovsk regional military administration, said the airport in the east-central Ukrainian city of Dnipro had been destroyed in a Russian strike, without providing extensive details.

"And one more attack on the airport in Dnipro," he said "There is nothing left of it already. The airport and the infrastructure nearby have been destroyed. But rockets keep flying."

Reznichenko said information about casualties was being clarified.

The airport was hit previously by Russian forces. Reznichenko said on March 15 that a Russian missile strike had put the runway out of use and damaged a terminal building.

Lesia Vasylenko, a Ukrainian MP, said on Twitter that the latest strike "leaves no infrastructure and destroys everything around the airport. Such a shame, as the airport was completely renovated just last year. All the investments and all the efforts completely wrecked."

Pope Francis called Sunday for a ceasefire in Ukraine for Easter, and urged "real negotiations" for a lasting peace.

As he led a Palm Sunday service in St. Peter's Square, Francis condemned the war in Ukraine, calling it "a war that every day puts before our eyes brutal massacres and cruelty committed against unarmed civilians." It was the first Palm Sunday service that members of the public had been able to attend in the square since 2019, after two years of Covid-19 restrictions.

"Put away your weapons, start an Easter truce, but not to reload your weapons and start fighting again, no," the Pope said. "A truce to achieve peace, through real negotiations, also willing to make some sacrifices for the good of the people."

"In fact, what victory will be the one who plants a flag on a pile of rubble?" he added. "Nothing is impossible for God."

Earlier this week, the Pope condemned the killing of Ukrainian civilians in Bucha, and raised and kissed a Ukrainian flag.

In his homily on Sunday, Francis condemned "the folly of war," and referenced those killed in the fighting as well as the many refugees fleeing violence.

"Christ is once more nailed to the Cross in mothers who mourn the unjust death of husbands and sons," the Pope said. "He is crucified in refugees who flee from bombs with children in their arms."

He added: "He is crucified in the elderly left alone to die; in young people deprived of a future; in soldiers sent to kill their brothers and sisters."

Yurii Sobolevskyi, deputy head of the Kherson Regional Council, said locals held a "peaceful rally" Sunday in the Russian-occupied city of Kherson that was dispersed by Russian forces.

"Today in Kherson a peaceful rally took place in front of the Yubileiny concert hall to commemorate the victims of Russian aggression," he said on Facebook. "As expected, the occupiers dispersed it."

He added that locals were participating in rallies at "great risk," saying locals faced intimidation and the threat of disappearance.

CNN was not immediately able to verify the rally or its turnout. Ukrainians opposed to Russian occupation have held a series of rallies in cities in southern Ukraine.

The General Staff of the Armed Forces of Ukraine on Sunday said Russians in the town of Nova Kakhovka in Kherson region had used local printing houses to prepare brochures, booklets and posters in preparation for an apparent referendum on the establishment of a so-called "Kherson People's Republic."

Separatists in eastern Ukraine held referendums in 2014 on the formation of "people's republics," in voting that was dismissed by Ukraine and Western countries as a sham.

Serhii Khlan, a member of the Kherson regional council, said Russian sympathizers holding Russian tricolor flags had tried to organize a rally in the city of Nova Kakhovka, posting a photo on Facebook that he said showed a very small turnout compared with a pro-Ukrainian rally.

"This is all you need to know about the probability of a Kherson People's Republic in the Kherson region," he said. "This will not happen, because this is Ukraine!"

Ukrainian President Volodymyr Zelensky said Sunday he spoke on the phone with German Chancellor Olaf Scholz and the two discussed possible new sanctions on Russia, as well as defense and financial support for Ukraine.

"Had a phone conversation with @OlafScholz. We emphasized that all perpetrators of war crimes must be identified and punished," Zelensky said on his official Twitter account.

"We also discussed anti-Russian sanctions, defense and financial support for Ukraine," he said.

“Twelve of our service personnel are coming home, including one female officer. We have also secured the release of 14 civilians, including nine women. In total, 26 of our people,” she wrote.

Russian Human Rights Commissioner Tatyana Moskalkova confirmed the swap on Sunday, writing on Telegram: “Among them are four employees of Rosatom and our valiant servicemen. This morning they landed on Russian soil. Family and friends will see them soon!”

Among the Ukrainian prisoners was Hanna Havrylina, mayor of Hremiach village in the northern Chernihiv region, according to Vereshchuk, who posted a picture of herself with Havrylina on Telegram on Sunday.

“She is back home as a result of yesterday’s prisoner exchange,” said Vereshchuk. “A brave and resilient woman. A true leader of her community. Yesterday I had the honor of meeting Ms. Havrylina in person.”

"Ukraine is ready for big battles," Podolyak said in televised remarks. "Ukraine must win them, particularly in Donbas. And after that, Ukraine will get a more powerful negotiating position, from which it can dictate certain conditions. After that, the presidents will meet. That may take two or three weeks."

Ukrainian officials have said they anticipate a major offensive in the Donbas by Russia, which has announced a shift in military strategy focusing on the country's east.