It is the first visit by an EU leader since Russia's invasion of Ukraine began in late February.

A top Austrian official said Nehammer intends to tell Putin “the truth” about the war during their face to face meeting.

Some background: Nehammer's trip to Moscow is significant given his country's neutral status, which is enshrined in its constitution.

Austria is not part of NATO and does not supply weapons to Ukraine. It has, however, provided Ukraine with humanitarian aid and helmets and protection vests for civilian use, according to a statement from the Austrian Chancellery.

Nehammer said Saturday that while his country is militarily neutral, "we understand we have to help where injustice and war crimes take place."

Images of at least 20 bodies strewn across the street in Bucha, Ukraine, emerged in early April following the withdrawal of Russian forces from the area, prompting Ukrainian President Volodymyr Zelensky to call for an end to Russian “war crimes.” And at least 50 deaths from a Russian missile strike on a railway station in the eastern city of Kramatorsk – where civilians were waiting for evacuation trains to safer regions of the country – led Zelensky to say, “We expect a firm, global response to this war crime.”

Already, there was a loud and growing chorus of calls for the International Criminal Court to pursue Putin for the unprovoked invasion, and the US government in March formally declared that members of the Russian armed forces have committed war crimes.

Here’s a very broad look at war crimes and the international justice movement:

What is a war crime?

What is the International Criminal Court?

Who can be tried by the court?

What crimes does the court handle?

How does the ICC bring proceedings?

What will the ICC investigate in relation to Ukraine?

How long do these investigations take?

Kramatorsk's railway terminal remained closed and civilian evacuations were continuing from nearby Slovyansk as cleanup and repairs continue following a Russian missile strike Friday, according to the city's mayor, Oleksandr Honcharenko.

"Compared to Friday, the city is quite calm today," Honcharenko said in remarks at a news conference Monday. "Yesterday we were allowed to go to the train station to start cleaning up after the terrible tragedy. Unfortunately, the evacuation from the Kramatorsk railway station is not happening today. There is no agreement on whether the railway station will be opened, as Ukrzaliznytsia [the Ukrainian state railway company] has to carry out some repair work."

Pavlo Kyrylenko, the head of the Donetsk regional military administration, said Sunday the death toll from a Russian missile strike on the train station in Kramatorsk had risen to 57.

Authorities had begun evacuating civilians fleeing an expected Russian offensive from the neighboring town of Slovyansk, the mayor said.

Nine drivers working for "Help People," a Ukrainian volunteer group that provides food and medicine for those in need and assists in evacuations, were detained by the Russian military and remain missing, a group official told CNN.

A total of 10 minibus drivers had driven into the Donbas region to help evacuate civilians from the besieged city of Mariupol, operating private vehicles in a low-profile rescue mission. Russian soldiers stopped them and tried to get them to drive the buses into Russia. When the drivers refused, they were taken prisoner, said Alex Voronin, the head of the non-government organization.

Voronin told CNN he had lost contact with all the drivers but one.

"All of them carried out the evacuation of people in the direction of Mariupol-Zaporizhzhia, they were sent on their trips on different dates — March 26, 27 and 31," Voronin told CNN. "Communication with them broke off the next day after departure. According to the people they managed to evacuate, the Russian military took the vehicles with people in Mariupol from the drivers, the evacuees were taken to the village of Nikolske, the drivers themselves were taken away for identification. Some of them are being held in pre-trial detention centers in Donetsk."

One of the 10 drivers was released, Voronin told CNN, and from him "we know that three of the missing are in Donetsk. They were interrogated with brute force, fed poorly and kept in appalling conditions. All the rest were told they have the right to keep [in detention] up to 30 days."

CNN cannot independently verify the whereabouts of the drivers or the conditions under which they are being held. Voronin said drivers left the Ukrainian-held city of Zaporizhzhia and did not drive in a single convoy.

As Finland and Sweden consider joining NATO, the Kremlin has warned Monday that expanding the alliance won't bring any more stability to Europe.

"We have repeatedly said that the alliance itself is more of a tool for confrontation. This is not an alliance that provides peace and stability, and further expansion of the alliance, of course, will not lead to more stability on the European continent," Kremlin spokesperson Dmitry Peskov said on Monday.

NATO officials told CNN that discussions about Sweden and Finland joining the bloc have gotten extremely serious since Russia's invasion. Senior US State Department officials said the matter came up at this week's NATO ministerial meeting, which was attended by the foreign ministers from Stockholm and Helsinki.

The Finnish government will present a security paper including a possible NATO membership for parliamentary discussion on Wednesday, the country's Foreign Minister announced on Monday.

“This gives [the] Parliament now a possibility to discuss all the aspects of possible NATO membership and/or other security solutions. And then based on that debate, of course, government will make the conclusions together with the President of the Republic," Pekka Haavisto told reporters ahead of the EU Foreign Ministers meeting in Luxembourg.

Haavisto said it was “important” that neighboring Sweden is following a "similar process" which he expects to take time. “But of course we exchange information all the time and, hopefully, if we make similar kinds of decisions, we could do them around the same time", he said. 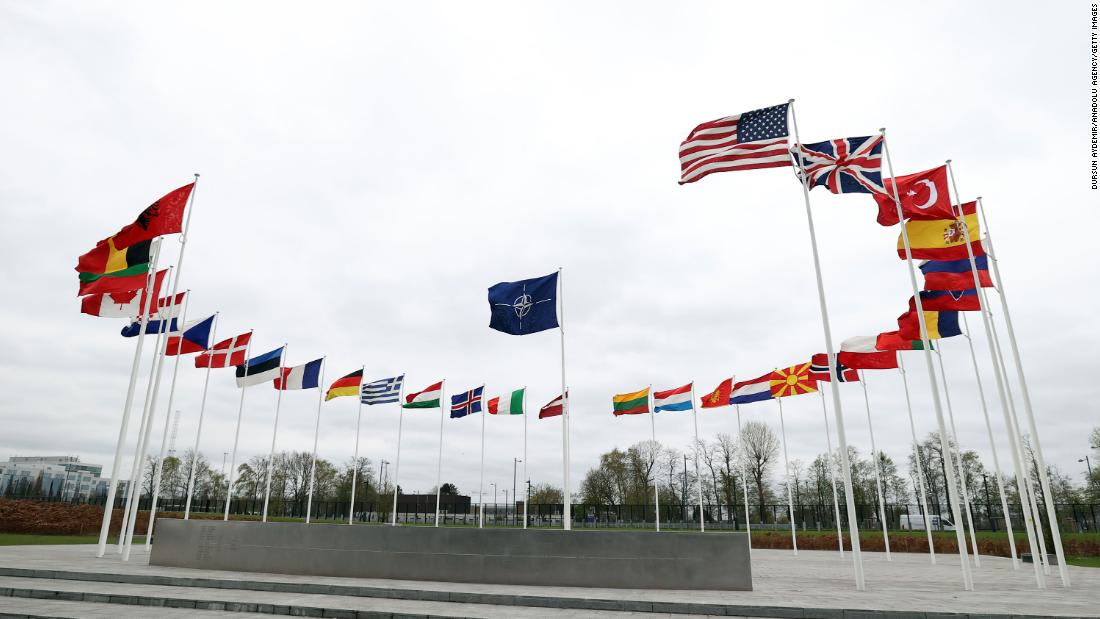 Finland and Sweden could soon join NATO, prompted by Russian war in Ukraine

The Czech Minister of Foreign Affairs Jan Lipavsky said leaders must make “any kind of effort which would lead to at least some easing of the situation" in Ukraine.

Speaking ahead of the EU Foreign Ministers meeting in Luxembourg, Lipavsky said "some humanitarian corridors" will help Ukrainians, but added: “On the other side, don't be naive. Putin is a perpetrator of this horrendous war crime and those atrocities, and he should be punished for that."

Nine humanitarian corridors were agreed for Sunday -- covering the regions of Donetsk, Luhansk and Zaporizhzhia -- allowing civilians to leave for safer parts of Ukraine.

The ministers are gathering just as the Austrian Chancellor Karl Nehammer is set to meet with Russian President Vladimir Putin in Moscow -- the first visit of an EU leader to Russia since the start of the invasion in late February.

The Lithuanian Foreign Minister Gabrielius Landsbergis remained cautious about the visit, saying: “I've seen a lot of efforts by many leaders -- by Emmanuel Macron -- to try and see whether they can talk to the guy [Putin]. I personally have no reason to believe that he's talkable [to].”

Germany's foreign minister Annalena Baerbock emphasized that everything must be done to clarify Russian war crimes in Ukraine, including supporting the International Criminal Court in investigating war crimes.

"What is clear is that Ukraine needs further military material, above all heavy weapons, and now is not the time for excuses -- now is the time for creativity and pragmatism," she added.

A special Air Force Airbus A310 MedEvac left Monday from Cologne-Wahn military air-field to the city of Rzeszow in south-eastern Poland, about 90 km from the Ukrainian border.

The plane will bring children and adults to Germany for treatment, the Bundeswehr confirmed.

Wounded Ukrainian soldiers had been brought to Germany in the past by other means.

Some background: The Office of the UN High Commissioner for Human Rights (OHCHR) recorded 4,232 civilian casualties in Ukraine since Russia's invasion of the country began, with 1,793 killed and 2,439 injured as of 9 April, according to a briefing released Sunday.

In a video address to the South Korean parliament, Zelensky described the ordeal of the southern city.

"[Mariupol] has been blocked by Russian troops since March 1. It was a city of half a million. Half a million people. The occupiers blocked it and did not even allow food and water to be brought there," he said, adding:

They tried to capture it in the most brutal way -- just to destroy everything in the city. Mariupol is destroyed. There are tens of thousands of dead. But even so, the Russians are not stopping the offensive. They want to make Mariupol a showcase of a ruined city.

Independent estimates of the full death toll in Mariupol are not available.

A Ukrainian military commander currently in Mariupol told CNN Wednesday night that Russian military forces are trying to wipe the besieged city “off the face of the Earth.”

“It is a humanitarian catastrophe. The military that were involved in active hostilities here are completely surrounded. There are supply problems with water, food, medication and general supply. It’s a very difficult situation,” said Serhiy Volyna, deputy commander of the Marine Battalion in Mariupol.