The European Union is “already discussing a sixth package of sanctions” in an effort “to keep increasing pressure on Russia to stop the war,” Danish Foreign Minister Jeppe Kofod said Monday.

“From the Danish side, we will be willing to go as far as we can to find consensus on sanctions, including also on energy,” he told reporters when arriving for a meeting of EU Foreign Ministers in Luxembourg.

Gabrielius Landsbergis, the Lithuanian Foreign Minister, said he was "happy that the European Commission was very clear that we're starting to work on six package with oil options.”

“And I hope that this time, it works.”

Asked what more is needed from the EU, Landsbergis said it was "best to go to Kyiv, go to Irpin, go to Bucha and see for yourself why we need to impose the sanctions."

But images of unarmed civilians, bound and shot, lying along the roads of Bucha -- a town that was until recently under Russian occupation -- appear to have convinced leaders to change tack.

Russia's oil and gas could be the next target. European Commission President Ursula von der Leyen told EU lawmakers last week that the fifth round of sanctions "will not be [the] last."

"Yes, we've now banned coal, but now we have to look into oil," she said.

Irish Foreign Minister Simon Coveney said that the EU needed to take a “maximalist approach to sanctions to offer the strongest possible deterrent to the continuation of this war and brutality.”

The view of the Irish Government that further sanctions should include oil, he said.

Ukrainian authorities are preparing for a major Russian offensive in the country's east, saying the latest push by Russian forces in eastern Donbas region has already begun.

A railway station in eastern Ukraine was hit by Russian shelling, the chairman of Ukraine's state railway company said Monday, without providing a specific location.

"Last night another railway station in the east of Ukraine was shelled by Russian troops," chairman Oleksandr Kamyshin said on Telegram.
"They continue to hit, aiming at railway infrastructure. There are no casualties either among civilians or among railway workers."

Five locomotives were damaged, Kamyshin said, as well as tracks and power lines.

"But that's just iron, we will restore that," he said.

Some context: A railway station in Kramatorsk in eastern Ukraine that was being used by civilians trying to reach safety was hit in a Russian missile strike Friday, authorities said. At least 57 people were killed and 109 were wounded in the attack as of Sunday, according to Pavlo Kyrylenko, the head of the Donetsk regional military administration.

Mirroring recent denials of the indiscriminate killing of civilians in the Kyiv suburb of Bucha, the Russian Ministry of Defense said Friday the missile strike was a "provocation" and blamed Ukrainian forces.

Vadym Denysenko, an adviser to Ukraine's interior minister, said in remarks on national television, "From my point of view, this big offensive (in eastern Ukraine) has already started."

"We have to understand it's not going to be the repetition of Feb. 24, when the first airstrikes and explosions started and we said, 'The war has begun.' The big offensive de-facto has already started."

Ukrainian and Western officials have said in recent days they have observed movement of Russian troops to Donbas following major setbacks for Moscow in a push to take Kyiv.

"Russians are accumulating their forces," Denysenko said. "They continue to redeploy their troops and equipment to Donetsk and Luhansk regions.
"Yes, there are still no major battles that are being discussed so much in the past few days. But in general we could say the offensive has already started."

Denysenko noted explosions overnight in the Dnipropetrovsk region and said the shelling of Kharkiv, Ukraine's second-largest city, had also continued.

New Zealand will deploy a C-130H Hercules transport aircraft and 50 support personnel to Europe on Wednesday for two months, a statement from the New Zealand government said Monday.

The team will travel throughout Europe transporting equipment and supplies to distribution centers for Ukraine but will not enter the country itself, the statement said.

Prime Minister Jacinda Ardern said New Zealand's support “is to assist the Ukraine Army to repel a brutal Russian invasion because peace in the region of Europe is essential for global stability.”
“Such a blatant attack on a country’s sovereignty is a threat to all of us and that’s why we too have a role to play,” she said.

New Zealand is also contributing $8.8 million (NZ$13 million) in further support to help Ukraine procure equipment for its military via the United Kingdom, the statement added.

The regrouping of Russian military forces will exacerbate an already-dire situation for civilians trapped in areas of fighting in eastern Ukraine, a Ukrainian lawmaker said Sunday.

Maria Mezentseva, a member of Ukraine's parliament, told CNN's Brianna Keilar that the Russian presence near Kharkiv — close to the border with Russia — along with the difficulties for aid organizations to help those fleeing “poses an additional humanitarian threat to small towns located next to Kharkiv which we cannot reach.”

Access to towns outside Kharkiv is being blocked, she said, and she called for Russia to open more safe-passage corridors.

“It means that we don't know how many more Buchas might be uncovered, unfortunately,” she said, referring to the Kyiv suburb where atrocities were committed against civilians during Russian military occupation.

Russian forces are allowing some civilian departures, Mezentseva said, but they are often being directed into Russian-occupied territories, Belarus or Russia itself.

“We understand that it's a simple breach of human rights,” she said. “A person who attacked you is inviting you to go with them or, let's say, to move to Russia. That's absolutely unacceptable. Moreover, they are forcibly depriving people from their identities, passports, and leaving them no choice.”

Some context: Ukraine's defense intelligence chief on Friday told CNN that Russian troops are regrouping across the border and plan to advance toward Kharkiv. Officials have urged the evacuation of civilians from the region, as Russian forces shift focus to southern and eastern Ukraine.

Russia or die: After weeks under Putin's bombs, these Ukrainians were given only one way out

Russian President Vladimir Putin has a new general overseeing his war in Ukraine, and his military commanders are signaling a new phase in the war: an all-out effort to take and hold the portions of Ukraine's Donbas region still under Ukrainian control.

Ukrainians seem to be taking that threat at face value. In the eastern Donetsk and Luhansk regions, local officials have been urging many communities to evacuate, opening up humanitarian corridors for civilians to leave for safer parts of Ukraine.

In northeastern Kharkiv region, authorities are evacuating the towns of Barvinkove and Lozova. In Dnipro, a regional capital in east-central Ukraine, the mayor, Borys Filatov, has requested that women, children and the elderly leave.

"The situation is gradually heating up in Donbas, and we understand that April will be quite hot," Filatov said recently. "Therefore, a huge request: Everyone who has the opportunity (as I have said repeatedly) to leave — first of all, this applies to women, children, and older people who are not involved in the work of critical infrastructure."

Can Russia mount a terrifying new offensive in the east? 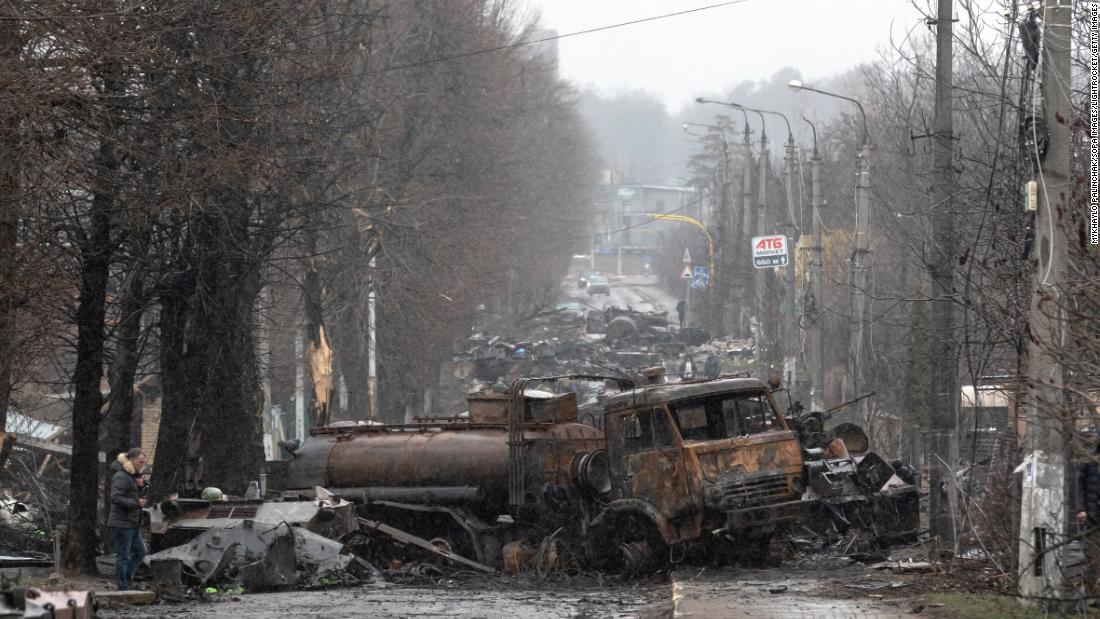 Analysis: Can Russia reboot its war in Ukraine in time for Putin to claim a victory?

Western leaders are grappling with how far to escalate their military aid to Ukraine as the Russian invasion seems headed for a brutal new turn, a decision that may rest on whether the West's goal is to push for a total defeat of President Vladimir Putin.

Heroic resistance from Ukrainian troops, with the help of Western anti-tank and anti-aircraft missiles, has already claimed a famous victory — the saving of Kyiv and the government of President Volodymyr Zelensky. But now, Russia has named a new general to lead what has been a chaotic war effort and is grouping its forces in eastern Ukraine for a fearsome, concentrated assault that could stretch Ukraine's outnumbered forces as never before.

The shift of strategy is forcing Western leaders to consider their own willingness to provide more offensive armaments to Kyiv ahead of what is shaping up to be a vicious battle that could dictate how much of Ukraine survives as a nation-state.

Pressure on the West to do more is being exacerbated by the fact that Russia's new approach augurs yet more carnage for the civilians that it has been deliberately targeting with a vicious war plan. 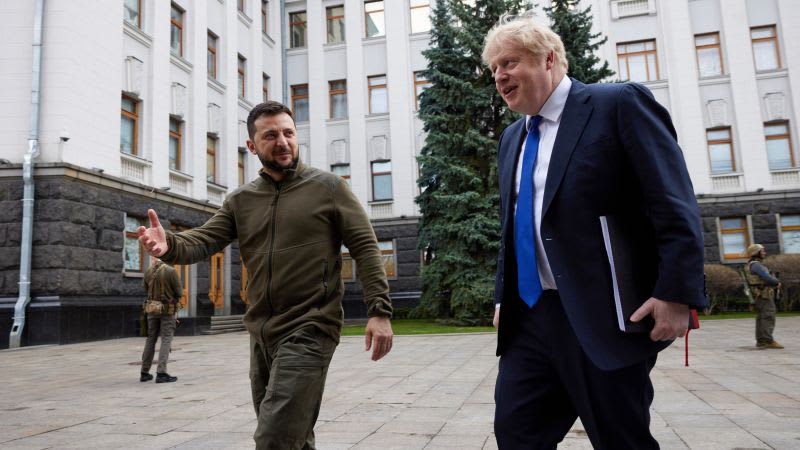 Ukrainian authorities are preparing for an anticipated major offensive in the country's east, with a new general leading Russian forces.