The Pentagon hosted the CEOs of the US military’s eight largest prime contractors Wednesday to figure out how to arm Ukraine faster, according to a readout of the classified meeting.

The roundtable discussion, led by Deputy Defense Secretary Kathleen Hicks, focused on the Pentagon’s objectives to keep supplying Ukraine with arms while also being able to maintain the readiness of US forces and support the defense of allies.

The classified roundtable was meant in part to address those concerns in an ongoing series of discussions between the Pentagon and the largest weapons manufacturers.

Those included Lockheed Martin, Raytheon, General Dynamics and others.

Getting weapons in faster: But it was primarily focused on the goal of “accelerating production” of weapons for Ukraine, including systems that can be shipped quickly and used effectively with minimal training.

A senior defense official said Wednesday the massive shipments of weapons to Ukraine, including thousands of Javelin anti-armor missiles and Stinger anti-aircraft missiles, have not affected the readiness of US forces.

A Russian warship that was evacuated in the Black Sea on Wednesday was one of the vessels involved in the famous exchange at Snake Island in February, according to a Ukrainian presidential adviser.

The island was hit by Russian missile strikes after Ukrainian defenders responded to the threat of Russian invasion with the words: “Russian warship, go f*** yourself.”

Some context: Conflicting reports have emerged from the Russians and Ukrainians about the incident onboard the Moskva on Wednesday. Russia said in state media the cruiser was evacuated after a fire onboard detonated ammunition. The Odesa state regional administrator claimed it was hit by Ukrainian missiles. CNN is unable to independently verify what took place.

However, comments from Oleksiy Arestovych, adviser to Ukrainian President Volodymyr Zelenksy, suggest there is confusion over what occurred.

"There's a big fire ... The sea is stormy so it’s unknown whether it’ll be possible to get them help. There are 510 crew members there. We can’t figure out what happened, either two sailors were smoking in the wrong place, or once again certain safety measures were violated," Arestovych said.

The ship is currently in the Black Sea basin, he added.

Regarding the February Snake Island incident, Arestovych confirmed the Moskva was involved. "Yes specifically this one, it was firing at the defenders. It’s the flagship of the (Russian) navy," he said.

For the first time since Russia’s invasion of Ukraine, the US is providing Kyiv with the types of high-power capabilities some Biden administration officials viewed as too much of an escalation risk a few short weeks ago.

The $800 million list is driven not only by direct requests from Ukraine, but also in preparation for a new type of fight on the open plains of southeast Ukraine right next to Russia, terrain that plays into Russia’s natural military advantages.

The new weapons package represents the starkest sign to date that the war in Ukraine is shifting — and with it the weapons Ukraine will need if it hopes to continue to stymie a Russian military that has regrouped and resupplied after its initial failures in the opening weeks of the war.

What the package includes:

This package stands out from previous security assistance in part because this tranche includes more sophisticated and heavier-duty weaponry than previous shipments. 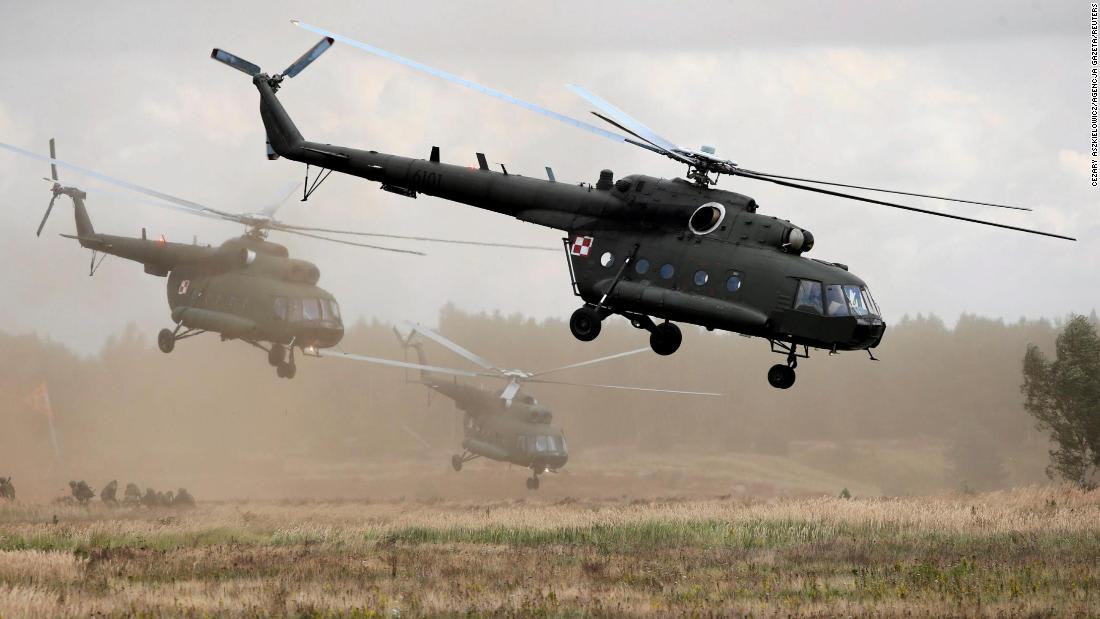 Why the Biden administration is giving new, heavier weapons to Ukraine

The heart-wrenching moment when a Ukrainian mother's worst fears come true — the discovery of her son's lifeless body, dumped in a shallow well after the retreat of Russian forces — has been documented on video.

The distressing scene witnessed by journalists from AFP on Sunday in the town Buzova, a liberated village near the capital, Kyiv, encapsulates the personal human tragedy of Russia's war on Ukraine.

"My little son," the woman wails, as she falls onto her knees, peering down into the well, recognizing her son by his shoes.

Her sobs intensify as she grasps at the rubble and dirt surrounding the pit.

The video shows police pulling her son's body from the well and wrapping him in a white body bag.

Upon seeing his body the woman tries to force past a makeshift cordon. Four men hold her back. "I won't leave," she cries out.

One other male body was also found in the well, which was located outside a razed gas station along the route of the Russian retreat in that area, according to AFP.

Taras Didych, head of the Dmytrivka community, said in the video that both men were residents of the village and members of the Territorial Defense.

How the men came to die was not immediately apparent, but Didyich told Ukrainian television another grave with dozens of civilians was found last Saturday in the village after the area had been occupied by Russian forces for several weeks, Reuters reported.

The total number of dead is yet to be confirmed, he said.

Conflicting reports have emerged from the Russians and Ukrainians about an incident involving a Russian warship in the Black Sea.

No evidence has emerged to support either claim and CNN is unable to independently verify what took place.

What the Russians say: The Russian Defense Ministry claimed Wednesday that the warship Moskva was evacuated after a fire onboard detonated ammunition, seriously damaging the vessel, according to Russian state media.

What the Ukrainians say: Hours earlier, Odesa state regional administrator Maxim Marchenko claimed in a post on Telegram that Ukrainian forces hit the ship with "Neptune" missiles causing serious damage to it.

Poor weather: Due to large storms over the Black Sea obscuring satellite imagery and sensory satellite data, CNN has not been able to visually confirm the ship has been hit. The Russian Defense Ministry has also not posted any official statement to its Telegram channel acknowledging the evacuation, or fire onboard.

Russian state media outlets TASS and RIA reported the ship's crew was evacuated and that the cause of the fire was still being established. According to the Defense Ministry, the Moskva is a missile cruiser that was built and commissioned in 1982.

US President Joe Biden told Ukrainian President Volodymyr Zelensky on Wednesday that the US was sending an additional $800 million worth of weapons, ammunition and other security assistance.

The additional 500 million euros brings the total financial assistance from the European Union for the Ukrainian Armed Forces to 1.5 billion euros, the release states.

Here are more of the latest headlines from the Russia-Ukraine conflict:

Colombia is ready to play a central role in helping supply Western countries with energy resources after the gaps caused by sanctions on Russia, Colombian President Iván Duque told CNN.

During an interview with CNN’s Richard Quest, Duque said: “[North American and European countries] know for sure that they can no longer rely for the energy supplies from Russia. Now, can Colombia contribute to the solution? The response is yes.”

Duque listed three areas where Colombia would be ready to increase production: traditional oil and gas extraction, renewables such as clean hydrogen, and coal.

“Colombia today immediately can have an increase on coal. … We have some of the biggest resources in the world, and we don’t use it [for power production],” Duque told Quest while he announced that Colombia will increase coal supplies to Germany — which recently approved plans to phase out Russian coal imports – following direct conversations between Duque and Chancellor Olaf Scholz.

Asked about US President Biden’s use of the world "genocide" to describe Russian actions in Ukraine, Duque told Quest he agreed with his US counterpart. “What is happening in Ukraine is a genocide. And it has to stop. … This is insane,” Duque told Quest.

Duque is in New York City on a three-day visit to promote foreign investment in Colombia and present his government's actions on security and the war on drugs, the Colombian President’s office said in a statement.

He visited the New York Stock Exchange and participated in meetings at the UN Security Council on Monday and Tuesday, respectively.

US officials have internally had preliminary discussions about sending a high-ranking member of the administration to Ukraine, according to a source familiar with the talks.

While President Joe Biden and Vice President Kamala Harris are unlikely to visit Kyiv anytime soon, officials have discussed sending Defense Secretary Lloyd Austin or Secretary of State Antony Blinken. But a decision is far from finalized and the visit could ultimately not materialize.

British Prime Minister Boris Johnson made a surprise visit to Kyiv in recent days. US officials said afterward that Biden was not currently planning a trip of his own.