Ukrainian Deputy Prime Minister Iryna Vereshchuk said no evacuation routes for civilians had been agreed with Russian forces on Tuesday, amid warnings from Ukrainian officials that a major battle for the Donbas region had begun.

"Intense shelling continues in Donbas," Vereshchuk said in a statement.

The Russians had refused to open an evacuation route for civilians in the besieged city of Mariupol to leave for the port city of Berdyansk, Vereshchuk said, while talks on other routes were ongoing.

"We continue difficult negotiations on the opening of humanitarian corridors in Kherson and Kharkiv regions," Vereshchuk added.

Some context: Civilians in Mariupol remain trapped in an increasingly dire situation with little chance of escape, officials say, as Russian shelling and attacks continue.

Over the weekend, the Russian Defense Ministry laid down conditions for the surrender of the remaining Ukrainian soldiers in Mariupol — an ultimatum rejected by officials in the city.

A brigade accused of committing war crimes in the Ukrainian town of Bucha has been awarded an honorary title by Russian President Vladimir Putin.

In a signed letter on Monday, Putin congratulated Russia’s 64th Separate Guards Motor Rifle Brigade for their “great heroism and courage” and awarded the unit the title of "Guards" for “protecting Russia’s sovereignty.”

“This high distinction recognizes your special merits, great heroism and courage in defending your fatherland, and in protecting Russia’s sovereignty and national interests,” Putin said in the letter.
“Through astute and bold actions during the special military operation in Ukraine, the unit’s staff became a role model in fulfilling its military duty, valor, dedication and professionalism,” the letter continued.

Earlier this month, mass graves full of hundreds of murdered civilians -- which CNN teams visited -- were discovered in the towns of Bucha and Borodyanka following the withdrawal of Russian forces from the Kyiv region.

In a statement issued April 4, Ukraine’s Ministry of Defense named the servicemen of the 64th Separate Guards Motor Rifle Brigade as war criminals directly involved in the atrocities committed against the civilians of Bucha.

The Kremlin has denied any involvement in the mass killings, while reiterating baseless claims that the images of civilian bodies on the streets of Bucha are fake.

During a visit to Bucha and Borodyanka last week, International Criminal Court (ICC) Chief Prosecutor Karim Khan said there were “reasonable grounds to believe that crimes within the jurisdiction of the ICC are being committed.”

But Khan also warned that it would be “challenging” to guarantee justice would be served in Ukraine, given Russia’s decision to withdraw its signature from an ICC statute that gives the court jurisdiction to prosecute individuals for genocide, crimes against humanity, war crimes and the crime of aggression.

Russia does not extradite its citizens to other countries.

Mila Turchyn walks into a McDonald's parking lot near the Poland-Ukraine border. She is anxious. She doesn't trust the man she is about to meet. He is a smuggler.

Turchyn found the man via a messaging app a few days ago, advertising transport services for Ukrainians stranded in Russia. They made a deal — $500 to drive Turchyn's mom and sister from Moscow to Przemysl, Poland. It's more than most families fleeing war can afford.

She is wondering if it worked.

Turchyn turns and suddenly finds herself in her sister's arms. There is a brief moment of joy, but no time to hug her mom. The smuggler wants to be paid now. He demands more cash. She pays. At this point, she wants nothing more than to be with her family.

The exchange is finally over and the three women are reunited in Poland. They quietly and quickly embrace.

For the Ukrainians who now find themselves displaced in Russia, however, getting to safety is dangerous. 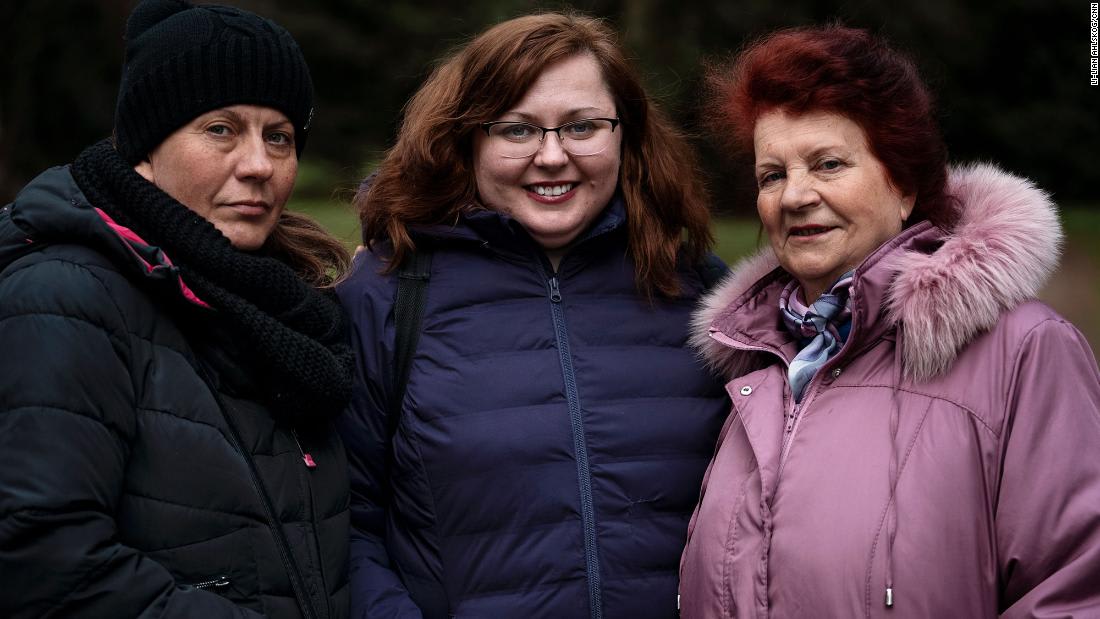 A woman's family were forced into Russia. She smuggled them to Poland

A statue of former Soviet leader Vladimir Lenin has been erected in Russian-occupied Henichesk, Ukraine, photos posted Monday to social media show, nearly seven years after one was removed as part of "decommunization" efforts.

The town of Henichesk sits on the Sea of Azov in Kherson province, just north of the border with Russian-annexed Crimea.

Three photos, posted on Facebook, show the new Lenin statue in front of the regional council building. A Russian flag is seen on the roof of the building.

CNN has geolocated and verified the authenticity of the photos.

The original Lenin statue outside the government building was taken down by order of the city council on July 16, 2015, video and local news reports show. According to those reports, Henichesk was one of the last towns in the region to have a statue of Lenin.

"Orcs in Kherson Region continue their experiments in moving back in time," Sobolevsky wrote, using a slang term for Russian soldiers.
"Red flags, monuments from the Soviet era. And all this against the backdrop of a worsening humanitarian crisis, severe suppression of dissent and manifestations of civic position. Their motive is absolutely transparent — they are [acting like parasites] on the nostalgic sentiments of the population," Sobolevsky wrote.

Having regrouped to launch an offensive in the east of Ukraine, Russian forces have started what one Ukrainian official described as the "second phase of the war" -- the battle for Donbas.

Control of Kreminna, a town in the eastern Luhansk region, has already been "lost" during heavy fighting, a Ukrainian official said.

The developments come after Russia bombarded cities across Ukraine on Monday, with a least four missile strikes reported in the western city of Lviv and at least seven people killed.

Here are the latest developments on Russia's invasion of Ukraine:

A new video posted by the Azov Battalion on Monday shows Ukrainian forces in Mariupol ambushing a Russian military convoy.

CNN has geolocated and verified the authenticity of the video, but it's unclear when the ambush occurred. The Azov Battalion is a unit that began as an ultra-nationalist militia but has since integrated into the Ukrainian armed forces.

The video, taken by a drone, shows a convoy of six vehicles moving south along Metallurgists Avenue in Mariupol. The convoy pulls off the road and onto a sidewalk just outside the Ararat cafe.

As the drone zooms out, it shows at least nine Ukrainian troops creeping toward the convoy, which has stopped moving. The video then cuts to soldiers firing in the direction of the convoy.

It then cuts to another scene, in which at least three of the six vehicles are on fire. A "Z" -- the symbol of the Russian invasion -- can be seen on at least two of the vehicles.

The video then shows Ukrainian soldiers throwing grenades over a brick wall, in the direction of Russian soldiers who are taking cover between one of the vehicles and a wall.

CNN is not airing the entire video, as it shows grenades exploding on top of the Russian soldiers.

In an address on Monday to world leaders, commander of the Azov Regiment, Lieutenant Colonel Denys Prokopenko, said Russian forces are firing on the Azovstal steelworks factory “willingly” in Mariupol as hundreds of people are sheltering inside.

The Azov Regiment, sometimes referred to as the Azov Battalion, is a unit that began as an ultra-nationalist volunteer militia but has since integrated into the Ukrainian armed forces.

Prokopenko, who is the commander of one of the Ukrainian units defending the port city, said in a post on Telegram account that among those sheltering are, “people of all ages, women, children, and families of Mariupol defenders. They are sheltering in the basements and bunkers from the ‘Russian world.'"

According to Prokopenko, those sheltering “found their only available shelter next to the Ukrainian soldiers, who are still defending the city from Russian invaders.”

“Russian occupational forces and their proxy from Luhansk People’s Republic/Donetsk People's Republics know about civilians and keep their fire on the factory willingly. They use free-fall bombs, rockets, bunker-buster bombs, and all varieties of artillery, both ground and naval, for indiscriminate attacks,” Prokopenko said.

He added, “City theatre, maternity hospital, schools, kindergartens, and houses were destroyed by those who now offer civilians evacuation and safety. These are the same people. And nobody believes.”

New images emerged early Monday on social media showing Russia's guided-missile cruiser, the Moskva, badly damaged and on fire in the hours before the ship sank in the Black Sea on Thursday.

The sinking of the Moskva, the flagship of Russia's Black Sea fleet, was the biggest wartime loss of a naval ship in 40 years -- and a huge embarrassment for Moscow.

The images show the Moskva listing to one side, with black holes from possible missile puncture marks, and significant scarring at and just above the waterline on the port (left) side of the middle of the vessel.

A large plume of black smoke can be seen billowing upwards, partly obscuring the front of the stricken ship.

Analysts told CNN the warship in the images looked like the Moskva, a Slava Class guided-missile destroyer.

Ukraine and Russia have provided conflicting accounts of what happened during Thursday's incident in the Black Sea.

Ukrainian President Volodymyr Zelensky pushed back against concerns from US and NATO officials that his military would need significant training before receiving advanced weapons from other countries, telling CNN his forces need weapons quickly – and can learn to use them just as fast.

“I’ve heard these tall tales that we would need months to train our troops to use new tanks. OK, give us a Soviet-era tank,” Zelensky said in an exclusive interview with CNN’s Jake Tapper on Friday.
“We are prepared to use any type of equipment, but it needs to be delivered very quickly. And we have the ability to learn how to use new equipment. But it needs to come fast.”

Zelensky said in the interview from the office of the president in Kyiv that weapons provided by the US and other countries, including the Biden administration’s new $800 million security assistance package, have helped his country resist Russia’s invasion.

But he said that more would be needed, and his country’s trainers would be able to get his forces up to speed quickly.