US President Joe Biden said he plans to send more artillery to Ukraine.

Upon arrival in Portsmouth, New Hampshire, Biden was asked by reporters on the tarmac if he plans to supply Ukraine with more artillery, which he answered "yes" before boarding his motorcade, according to pool reporters.

Donbas, a sprawling and beleaguered heartland region that blankets much of eastern Ukraine, has been the front line of the country’s conflict with Russia since 2014.

But now its people, already scarred by eight years of fighting, are bracing for an assault even more intense. An impending battle for control of the territory is expected to define Russian President Vladimir Putin’s invasion, after his forces suffered costly failures in Kyiv, and across central and northern Ukraine.

But what does the Donbas region mean to Putin? Despite its move into independence along with the rest of Ukraine in 1991, Donbas has maintained a place in the psyche of Russian leadership.

A famous Soviet propaganda poster from 1921 dubbed Donbas “the heart of Russia,” depicting the region as a beating organ with vessels stretching across the Russian empire. Before then, the region was part of the concept of “Novorossiya,” or New Russia, a term given to territories towards the west of which the Russian empire had expansionist ideas.

Cities like Luhansk and Donetsk are historically “places that (Russians) could see a certain version of themselves,” Rory Finnin, associate professor of Ukrainian studies at the University of Cambridge, told CNN.

And that historical image could still persist inside Putin’s own worldview, experts suggest.

Observers have often suggested that Putin’s desired endgame is to rebuild the Soviet Union in which he first rose up the ranks. Anna Makanju, former director for Russia at the US National Security Council, last month suggested that Putin “believes he is like the czars,” the imperial dynasties that ruled Russia for centuries, “potentially called by God in order to control and restore the glory of the Russian empire.”

But such a project could not be attempted without an effort to recapture Donbas, given its emotional resonance as the Russian empire’s industrial backbone. “It’s symbolically very important; the Donbas supplied the entire Soviet Union with raw materials,” Markian Dobczansky, an associate at Harvard University’s Ukrainian Research Institute, said.

“There’s every possibility that Putin will move now to effectively bisect Ukraine; that will give him enough to be able to declare a victory domestically, and allay his critics that this has been a botched invasion,” said Samir Puri, a senior fellow in urban security and hybrid warfare at the International Institute for Strategic Studies (IISS), who worked as a ceasefire observer in Donbas between 2014 and 2015.

Read more about Donbas here and learn more about Russia's strategy in the region in the video below:

US President Joe Biden and fellow world leaders "reiterated" their commitment to providing Ukraine with security, economic and humanitarian assistance on a secure video call Tuesday, the White House said.

On the call, which included the leaders of several European countries along with Canada and Japan, the leaders "affirmed their solidarity" with the Ukrainian people and condemned humanitarian suffering in the country.

The leaders agreed to continue their discussions going forward.

The Ukrainian Freedom Fund (UFF), a non-profit that has a footprint in Ukraine and is working to procure defense materials for Ukrainian troops, received a letter from Kyiv’s deputy mayor yesterday requesting 200,000 respirators — also known as gas masks — to shield Ukrainians from any potential chemical weapons attacks.

“Due to the large-scale invasion of Russian troops into the territory of Ukraine, there is a threat of chemical damage to the population of Ukraine and the citizens of Kyiv in particular,” Kyiv's Deputy Mayor Volodymyr Bondarenko wrote to UFF in a letter reviewed by CNN. “On behalf of the Mayor of Kyiv Vitali Klitschko, citizens of Kyiv municipality and Ukrainian society, we ask for humanitarian assistance, mainly in the form of personal protective equipment (respirators, according to technical requirements in the attachment), for Kyiv humanitarian aid center.”

This request shows how urgently the Ukrainians believe they need this equipment. As part of the new security assistance announced last week by US President Biden's administration has given some protective equipment to Ukraine to shield them from possible chemical weapons attacks and more will follow, a US State Department spokesperson said on Tuesday. The department would not detail the amount of this material provided so far.

Last week there were unconfirmed reports of the use of chemical weapons in Mariupol. US officials have also warned that they have had credible information that Russian forces may use a variety of riot control agents, like tear gas mixed with chemical agents, as part of their Mariupol assault.

The risk of Russia carrying out a chemical weapons attack in Ukraine still stands, but the likelihood has not gone up or down in recent days, a US intelligence official said.

Yet because the risk remains, Ukrainians want to be prepared which has driven this urgent effort. The demand is much higher than it has ever been, making procurement challenging.

“Gas masks are hard to come by right now,” explained a US military veteran who is living in Ukraine and working for the UFF.

The organization is working on procuring those gas masks now and has already provided thousands of bullet proof vests, helmets, vehicles and field first aid kits (IFAKS) to Ukraine's Territorial Defense forces, and is continuing its efforts.

The US has few ways to track the substantial supply of anti-tank, anti-aircraft and other weaponry it has sent across the border into Ukraine, sources tell CNN, a blind spot that's due in large part to the lack of US boots on the ground in the country — and the easy portability of many of the smaller systems now pouring across the border.

It's a conscious risk US President Joe Biden's administration is willing to take.

In the short term, the US sees the transfer of hundreds of millions of dollars' worth of equipment to be vital to the Ukrainians' ability to hold off Moscow's invasion. A senior defense official said Tuesday that it is "certainly the largest recent supply to a partner country in a conflict." But the risk, both current US officials and defense analysts say, is that in the long term, some of those weapons may wind up in the hands of other militaries and militias that the US did not intend to arm.

"We have fidelity for a short time, but when it enters the fog of war, we have almost zero," said one source briefed on US intelligence. "It drops into a big black hole, and you have almost no sense of it at all after a short period of time."

In making the decision to send billions of dollars of weapons and equipment into Ukraine, the Biden administration factored in the risk that some of the shipments may ultimately end up in unexpected places, a defense official said.

But right now, the official said, the administration views a failure to adequately arm Ukraine as a greater risk. 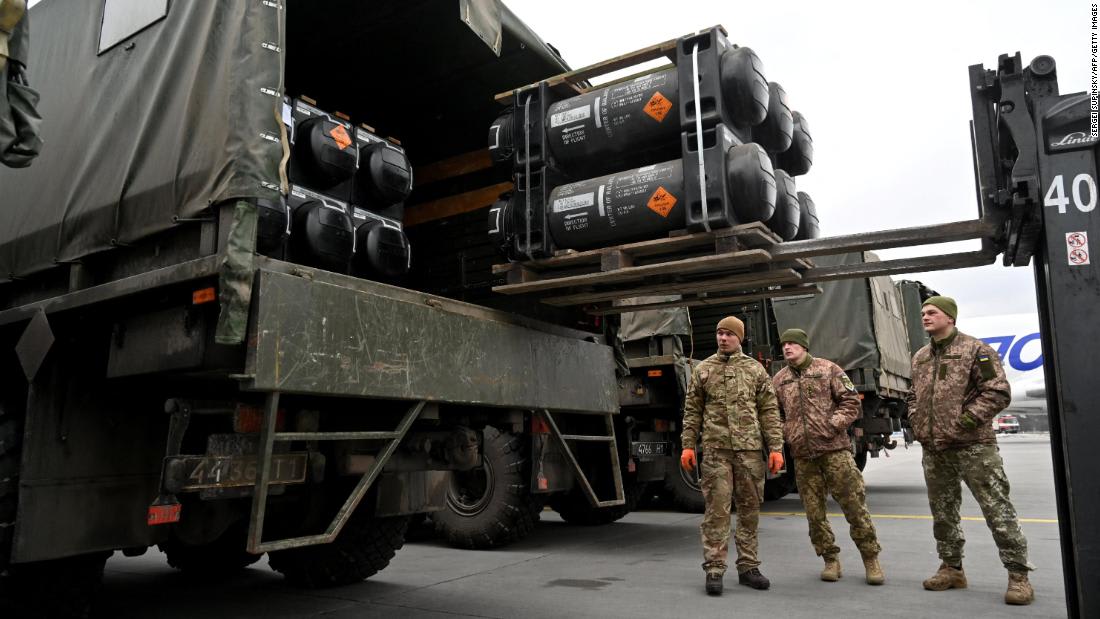 What happens to weapons sent to Ukraine? The US doesn't really know

A flight carrying US security assistance for Ukraine from the $800 million drawdown package signed last week arrived in Europe yesterday, and seven more flights with security assistance are expected to arrive in Europe in the next 24 hours, a senior US defense official told reporters Tuesday.

The official could not say when that assistance will arrive in Ukraine via “ground transportation” but said “none of these shipments sit around very long before being offloaded off of” airplanes and “onloaded appropriately” to be sent to Ukraine.

“Then the next 24 hours, we expect there’ll be more than a half a dozen, probably more like seven, flights coming from the United States into the theater with various amounts of material based on the $800 million dollar drawdown package approved last week,” the official said.

More on the package: The US is providing Ukraine with 11 Mi-17 helicopters, 300 Switchblade drones, 18 Howitzers and protective equipment to guard against chemical attacks in the latest batch of security assistance approved by the White House, the Pentagon announced.

Pentagon press secretary John Kirby said the $800 million package was intended to “meet urgent Ukrainian needs for today’s fight” as Russian forces shift the focus of their attack to eastern and southern Ukraine.

The $800 million shipment brings the total amount of military assistance the US has provided to Ukraine to more than $3 billion.

The Security Service of Ukraine (SBU) on Tuesday released a purported communications intercept of a Russian ground unit commander, who said Russian aircraft were planning to "level everything to the ground" around Azovstal, the steel factory that is a redoubt of Ukrainian defenders in the besieged port city of Mariupol.

The audio recording released Tuesday purports to feature the voice of the leader of a Russian platoon four kilometers (or about 2.5 miles) from Azovstal.

The man's voice says, "We are expecting 'surprises' from Russia here."

"What kind of surprises?" a woman's voice replies.

"Three-ton ones, from the sky," the man replies, adding that his command "said to level everything to the ground."

CNN cannot vouch for the authenticity of the recording, but the SBU has previously released audio from intercepted radio traffic revealing Russian soldiers discussing killing and raping civilians, bolstering allegations of war crimes by Russian troops.

Russia’s Ministry of Defense did not immediately respond to CNN’s request for comment.

Ukrainian officials and military commanders have described the situation around the Azovstal plant to be extremely difficult, with hundreds of civilians also sheltering in the basements of the steel factory with dwindling supplies and defenders under constant attack.

"Everybody left," the voice on the audio recording says. "Everyone who wanted to, all left. All that's left are the patriots and the very smart ones."

Describing the impending aerial bombardment of Azovstal, the man adds, "A lieutenant colonel came and said, 'You will feel the effect of it yourself.'"

The man in the audio recording also mentions another Ukrainian town in Luhansk region, Lysychansk, saying it "is being wiped out from the face of the earth. For the third day in a row."

Ukrainian President Volodymyr Zelensky announced in a video address on Monday that Russia had commenced the battle for Donbas in eastern Ukraine, adding that Ukrainian forces will continue to fight against a Russian incursion in the region. Recent satellite images have shown Russian military convoys moving towards Donbas in preparation for a large-scale invasion — one that is likely to shape the fate of the war.

Ukrainian forces continue to resist Russian attacks in the southeastern port city of Mariupol. The fate of the city rests on an unknown number of defenders making their last stand at the Azovstal steel plant, where Ukrainian troops have previously rejected a deadline to surrender.

If you're just catching up on the news, here are the latest developments in the Russia-Ukraine conflict:

The official said the new operations have consisted of “ground movements … supported, of course, by some long-range fires, mostly artillery.”

But the official also stressed that Russia is still conducting “shaping operations” as well “to make sure they have logistics and sustainment in place” along with other “enabling capabilities.”

The US expects to see a “more blended approach” to the new operations in Ukraine after their failures in the north of the country, according to the official.

Russia has added two more battalion tactical groups (BTGs) to its forces inside Ukraine in the last 24 hours, according to the official, bringing the total to 78 BTGs.

However, the official said the US assesses that Russia is now down to 75% of the “combat power” that had been amassed before the latest invasion of Ukraine.

“This is across all functions … it's infantry, it’s artillery, it’s aviation, both fixed and rotary, it’s ballistic missile, cruise missile,” the official said on a call with reporters. “When you just add it all up, our general assessment is he’s about 75% of his original combat power.”